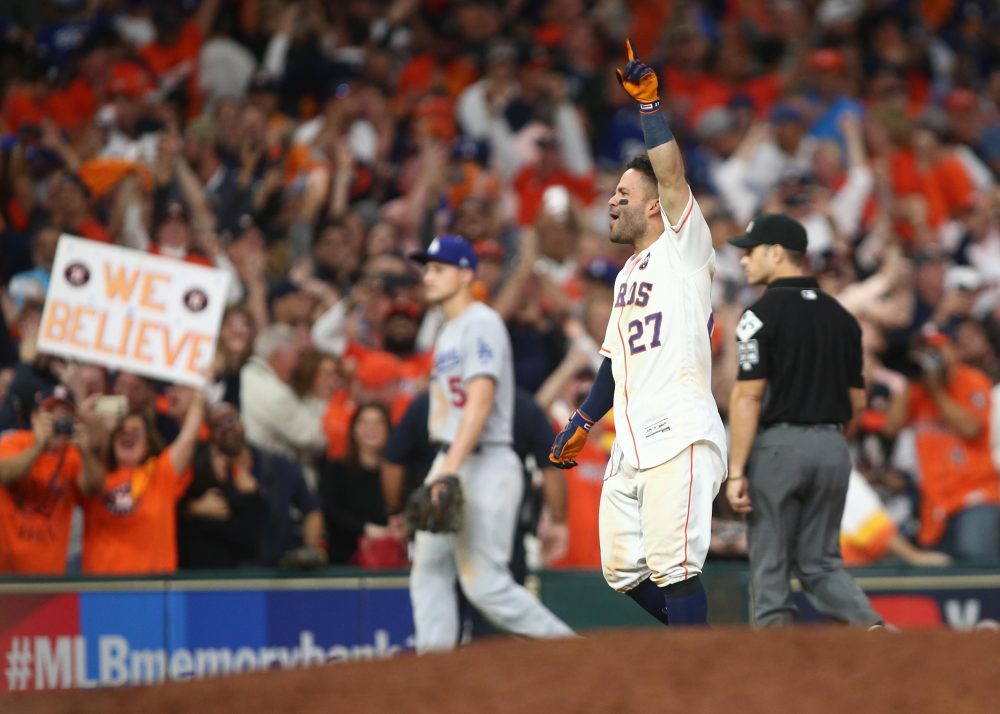 Somewhere, perhaps in a place only accessible to those with True Sight, there is a version of Game 5 of the World Series where Clayton Kershaw’s slider finds the bottom of the strike zone. Here, where the light is a dim blueish-grey and flakes of slick baseball hide float in the air, that slider misses the bat of Yuli Gurriel. It sinks into Austin Barnes’ mitt. It doesn’t find the left-field bleachers or the outstretched hands of 43,300 revved-up Astros fans. It doesn’t tie the score or fuel a false narrative about the fragility of Postseason Kershaw, or make a playoff hero of a man who, by all logic, should be benched through the end of the year.

Good things disappear in the Upside Down.

Clayton Kershaw and Dallas Keuchel entered Sunday’s showdown as the sixth pair of Cy Young Award winners to face off multiple times in the same World Series. You could read that sentence and reasonably expect a pitcher’s duel to spring from it, something that looked like Kershaw’s seven shutout innings and Keuchel’s quality start in Game 1. You would be wrong.

Keuchel splattered his strike zone with 17 balls in the first inning; a feat in and of itself, given home-plate umpire Bill Miller’s exceedingly pitcher-friendly calls. It was good enough for a leadoff single and back-to-back walks, but even when Keuchel managed to locate his pitches, they found ways to get away from him. One went for a Logan Forsythe RBI single, while Gurriel missed a potential third out with a throw that veered well beyond second base and allowed Kiké Hernandez to score. The Dodgers suddenly had a three-run lead with Kershaw yet to step foot on the mound.

So, maybe it wouldn’t be a pitcher’s duel, but it could be a one-sided gem from the Dodgers’ slider-slinging southpaw. For three full innings, it certainly looked like things were trending in that direction. Kershaw retired the side with 12 pitches in the first inning, retired it with another 12 in the second, and gave up his first hit in the third before stifling a potential rally with a double play. For three full innings, you could fit a tidy narrative framework over this game: one where Keuchel was chased off the mound, where the Dodgers capitalized on a few mistake pitches and Kershaw was working his way up to his second road win of the postseason.

We knew what this game was until the fourth inning. Kershaw treated George Springer to a leadoff walk, followed by Jose Altuve’s first base hit and Carlos Correa’s RBI line-drive double. Gurriel punctuated the Astros’ efforts with a first-pitch home run, crushing the ball 389 feet over the left-field scoreboard for his second dinger of the series. This game began to evolve into a new and strange animal.

In the Upside Down, Minute Maid Park is even smaller. Its fences constrict the field, unfurling like the tendrils of strange plants to grasp at 320-foot fly balls and warning track line drives. In the Upside Down, all cheap shots land for home runs, validating the cries of every over-zealous broadcaster who can’t be bothered to read a fly ball from the body language of the outfielder standing under it.

The Astros and Dodgers combined for seven home runs Sunday, one shy of the eight-homer mark they set during Game 2. It brought them to a total 22 homers in the World Series, a new all-time Fall Classic record and one that will likely be extended during Game 6 on Tuesday. Some were cheap shots, like Carlos Correa’s 328-footer in the seventh and Yasiel Puig’s 350-foot blast that just hooked over the left-field fence in the ninth. Others were absolute bombs, not only clearing the top of Bobby Dynamite’s miniature locomotive but leaving the park altogether. Still others were unceremoniously dumped back on the field by superstitious fans.

It came as little surprise, then, when Joc Pederson took a few seconds to admire his fly ball in the eighth. You couldn’t fault him for expecting it to leave the park, as nearly every other ball already had. This would-be homer was ill-fated, though, only scraping the left-field fence for a double. Whether those few precious seconds would have granted him enough time to stretch it into a triple and eventually plate another run, we’ll never know.

Several at-bats after Pederson’s non-home run, with the Astros still leading 11-8 in the eighth, Chris Taylor stood pat at first base. Corey Seager hit a double to left and, as Pederson scored and Taylor rounded third base, he glanced at third-base coach Chris Woodward. The din of the crowd drowned out Woodward’s call, but Taylor thought he could just make out the word “no.”

As he started to charge toward home plate, Josh Reddick roped the ball and fired it to Brian McCann at home. Taylor reversed direction and scooted back to third base. Had he continued to run, there was a decent chance he would have beaten the throw to tie the score, and there was also a pretty decent chance that he would’ve gotten tagged out on the play. Between innings, Woodward clarified his request. He hadn’t said no.

“I was saying ‘Gotta go,’” he clarified to the outfielder, then quickly reassured him, “I think you would’ve been out with that throw, honestly.”

Hindsight is cruel. There’s no way of knowing whether or not Taylor would have slipped under McCann’s tag, but it’s the not knowing that eats away at a team who just lost a World Series game 13-12 in extra innings. If Taylor had scored, the Dodgers might have taken home their third win of the Series. They might be sitting pretty right now, one win away from a championship title with one left to play at home.

This wasn’t the first time a runner had misheard his base coach during a pivotal World Series play, nor was it the first time that a base coach failed to articulate his command or, I don’t know, wave his arms to emphasize his point.

This is the second time in World Series history a runner has been confused by “no” vs “go” from a 3rd-base coach. https://t.co/EyRvGlU8S0 pic.twitter.com/uSzsiEWBTB

Maybe we’ve got it all backward. Maybe this 5-hour, 17-minute fever dream was the real parallel dimension, with its three lead reversals, its cumulative 417 pitches, 18 strikeouts and seven home runs, its exploding bullpens and infectious Carlos Correa GIFs. Maybe we’re all just living in an alternate universe, where Dave Roberts has a well-thought-out reason for throwing Brandon Morrow on the mound for the third day in a row; where George Springer can make the worst diving misplay before redeeming himself with a mammoth game-tying home run; where Alex Bregman punctuates a crazy 10-inning affair with a career first—an innocuous little walk-off base hit.

Maybe, just maybe, we’ve been in the Upside Down all along.

You need to be logged in to comment. Login or Subscribe
John Bradshaw
The equivalent social justice suspensions this year (pillar and joyce) were 1 or 2 games. Worst-case Gurriel is suspended for game 4. He got 5 games because he wouldn't appeal it.
For folks who love a players union you sure seem to hate when it defends its clients.
Reply to John