Major League Baseball, looking to appeal to younger audiences, has consulted with top Silicon Valley executives to come up with some ideas to inject new life into the National Pastime. Short Relief’s investigative team has uncovered a partial list of these recent and prospective innovations, transcribed from audio recordings of various meetings between MLB executives and the Valley’s brightest innovators, reprinted here and edited for clarity.

Unnamed executive: “Studies show that fans have grown tired of watching pitchers throw nine ineffective innings. What we need is a PITCHING DISRUPTOR: a player, or possibly a coach, who can walk out to the mound and discuss strategy with the pitcher. If this idea is successful (and if the IPO goes well) we can introduce PITCHER 2.0.”

Pat Courtney, Chief Communications Officer: “Perhaps [MLB] can develop an app—have we discussed this, [Commissioner of Baseball] Rob [Manfred]?—to better schedule pitchers’ starts. It doesn’t make sense to keep throwing the same guys out there every day, they need some rest. What did Jeff call it? ‘Rotaytyn?’ Teams can start cycling through three or even four different pitchers, keeps them fresh. [Muffled sounds]. Let’s try to get this out for next spring.”

Bob Bowman, President of Business and Media: “We’re leaving out some key markets. This game has been around for over a century and most teams are still located north of the Ohio. We need to expand. Which is why I’m excited to announce the launch of our new venture, BASE-X. I believe that by the end of the decade, we can land a team on the West Coast. [Excited murmuring]. Yes, and possibly—and this is the big one—even two teams.”

Unnamed Silicon Valley executive: “Congratulations, congratulations everyone. PITCHER 2.0 was a HUGE success, players are throwing harder than ever and we no longer have to watch noodle-armed journeymen toss eight-inning complete-game losses. Huge success. But we can’t let this get in the way of our clear vision: What can we do to improve upon 2.0? Well, we’ve brought some ideas for you. Let me introduce… UBER, but for traveling from the bullpen to the mound.”

Manfred: “We were inspired by Branch Rickey’s courageous commitment to diversity in an era when bold thinking like ours was just not accepted. Well, big news. We’re exceedingly pleased to announce the Branch Rickey Diversity Program, presented by Apple.”

Chief Financial Officer Bob Starkey: “Ok, folks, PITCHER 2.0 and the Upgraded Batting Experience have produced some unintended consequences, and labor costs are soaring. Rob and I have been talking about how to deal with this issue, and we’ve decided to employ some new language in the contracts that players sign. It’s really just a non-compete clause, coupled with a non-disclosure agreement. Teams can reserve the right to bring back any player on a one-year contract, and we think it’s going to revolutionize our industry.”

Manfred: “There has been some bad P.R. out there lately about the composition of our front offices, and I need to address this. MLB is fully committed to the Rickey Diversity Program, presented by Apple. There can be 30 white, blue-eyed, blonde GMs in the league and they’re going to be diverse, too, because they’re going to bring different life perspectives, from Ivy Leaguers to former ballplayers.”

Ahead of the first game of the World Series, Yasiel Puig dyed his hair Dodger blue and had a cherry red–dyed mouth shaved into the shortest part of his hair. On Twitter, I offered Mr. Puig homemade cookies if he could convince Chase Utley to dye his hair blue, too, but the message appears to have gone astray. Instead, Utley appeared in the dugout during Game One with his own hair, gray again after his lost bet with Corey Seager.

While some may attribute Utley’s stoic mien and unassuming appearance to his general nature, his woeful performance in the playoffs in recent memory may suggest another reason, something more sinister. Utley is being dogged by some trickster spirit, has been cursed by some distractible, vindictive being who punishes the Dodger each time he makes himself noticed. Only by laying low, by attracting as little attention as possible, can Utley save himself.

How else can we explain the stultifying effects the playoffs have had on his bat and defense? That Utley is simply aging and no one can be The Man forever is too pedestrian an answer. Even in 2009, after yet another multi–home run World Series game, it seemed like Utley was aware of how dangerous attracting attention might become—“as if he honestly didn’t want to be told he had just done something special” indeed.

But Chase Utley is a baseball player, and his team is playing in the most important games of the season. And so, in Game One, when Clayton Kershaw laid down an excellent sacrifice bunt and returned to the dugout, it appears that Utley could not keep himself from a celebratory high five. Following Justin Turner’s sixth-inning home run, Utley patted him on the head enthusiastically.

In Game Two, which Utley started, he kicked a perfectly playable ball in the third inning. Even the stadium scorers know what’s going on, though, and they awarded Josh Reddick a hit, rather than punish Utley for his capricious haunting. But the ghoul would not be dissuaded, and the runner eventually came around to score. Houston evened the series that night. Utley hasn’t so much as sniffed a hit.

At the beginning of Game Four, during a pre-game huddle, Utley was barely visible, hunkered down and nearly obscured by Kershaw. The pitcher’s elbow even shaded most of the nameplate above Utley’s back. No Chase Utleys here, the moment protests. Seek your amusements, spirit, elsewhere. 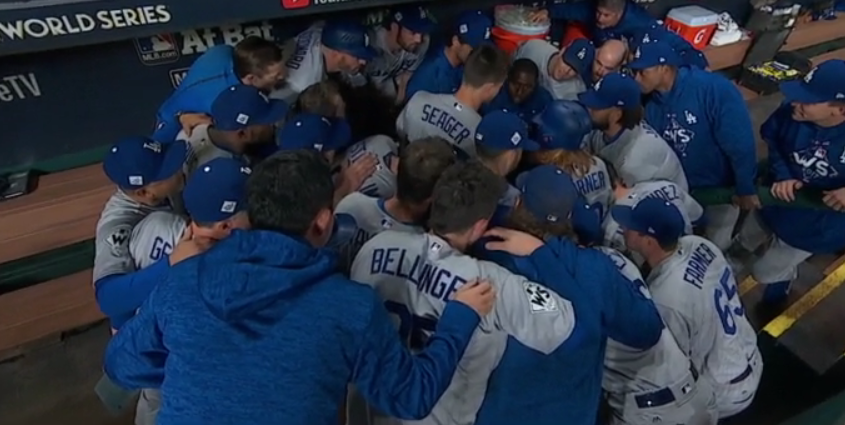 Clayton Kershaw knows. Dave Roberts knows. After observing the evidence, I believe Yasiel Puig knows. After all, #PuigYourFriend, Chase Utley, and he’s doing his part to draw the trickster’s gaze away. They’re all trying to protect him. It’s for his own good.