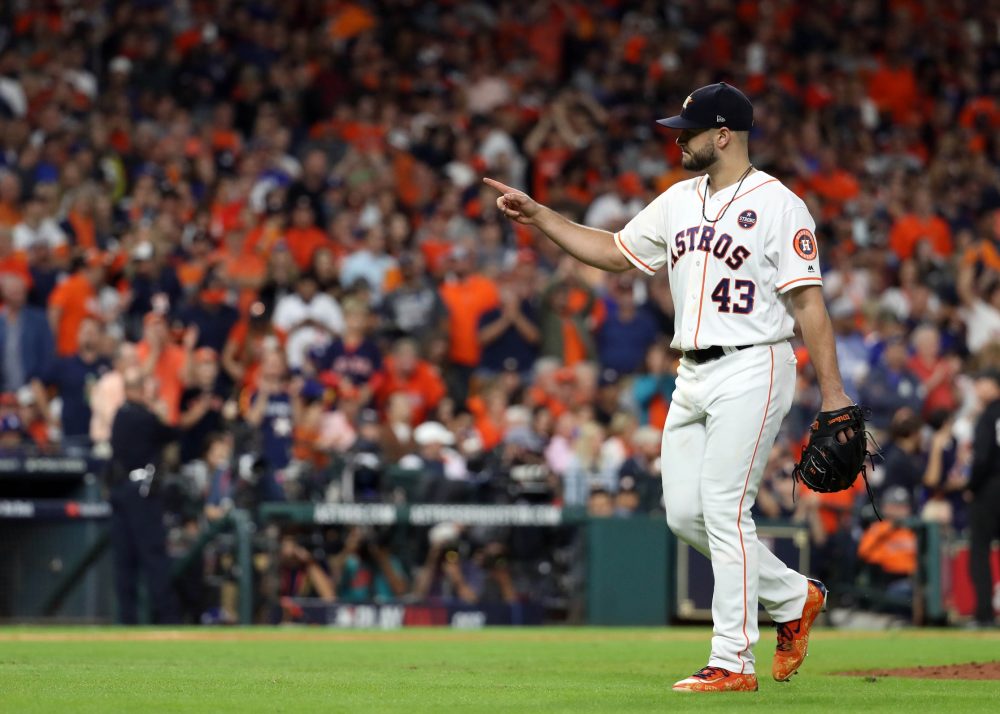 Well. There’s a lot to unpack in this one.

First and foremost, the result. The Astros won. The Dodgers lost. The series now stands at 2-1, with the Astros having two more games to play in Houston and an undefeated record at home in the playoffs. They’re firmly in control of the series, to say the least.

There were a lot of little things that happened last night that could have rippling effects on the series, though. Depending on who wins the series, this third game could be looked at as the reason that Houston won, or something incredible that Los Angeles overcame to succeed.

The Dodgers started Yu Darvish and expected him to work deep into the game. Darvish is one of the best in the game, an absolute wizard of his craft when he’s on. He has so many ways of making batters look silly. The Dodgers expected good things, and expected him to give their bullpen an easy night of work. It didn’t quite go that way.

Darvish had the shortest outing of his career, getting just five outs and allowing four runs. He simply did not have it, and Houston made him pay.

With their backs against the wall early on, Los Angeles turned to Kenta Maeda. Maeda has been used exclusively in relief all postseason, but his durability as a starter allowed him to provide 2 2/3 scoreless innings of relief, keeping the Dodgers in the game for the time being. They needed it, because Lance McCullers was mostly on his game.

After getting the save to end the ALCS, McCullers worked 5 1/3 innings against the Dodgers and allowed three runs. Only one scored with him on the mound, and none of them scored on hits.  There was potential for disaster in the third inning when the bases were loaded with none out, and Corey Seager and Justin Turner coming up. Instead, McCullers managed to wriggle his way out without losing the lead.

In the end, that may have been the game. The Dodgers had another chance with McCullers on the mound, when Chris Taylor was up with a runner on third and two outs. Taylor hit a screamer to center field. George Springer has been playing on hell of a center field.

Yasiel Puig also didn’t help matters much in the fourth.

The Astros scored their final run in the fifth inning when Tony Watson entered. Before they got good, the Astros had a reputation for throwing the ball around and making fools of themselves. Watson certainly honored that tradition, and in all the wrong ways.

Give credit to third base coach Gary Pettis and his aggressive send of Josh Reddick. Pettis has earned the Astros a few crucial runs in the postseason this way.

McCullers gave way to Brad Peacock with one out in the sixth inning and runners on second and third. It would be the only pitching change that A.J. Hinch would make that night. Peacock, quite simply, was brilliant.

Both of those runners scored, the first on a Puig ground out, and the second on a wild pitch.

That was it. Peacock did not allow a hit and walked just one man over the final 3 2/3 innings of the game, totally shutting down the Dodgers’ offense and earning his first save. Furthermore, Peacock spared Hinch from delving deeper into his rickety bullpen and saved them for today’s game (though Chris Devenski and Will Harris both warmed up at various points during his outing).

Dave Roberts, meanwhile, had to use five relievers, including Brandon Morrow, whom the Dodgers have been reluctant to use extensively on consecutive days. Roberts himself admitted that there will be quite a deal of pressure on Alex Wood today.

He almost certainly won’t have Maeda backing him up as a source of length, and Ross Stripling threw an inning-and-a-third. Roberts will likely want to avoid giving Brandon McCarthy too much work. The only saving grace of the matter is that Kenley Jansen was not used, and will likely be available for six outs if he’s needed.

The Astros may also be without an important player today, and possibly longer than that. Yulieski Gurriel was caught on camera making a racist gesture following his first-inning homer off Darvish.

Commissioner Rob Manfred is meeting with Gurriel today and will announce any discipline for the Houston first baseman shortly thereafter. Previous similar incidents have resulted in suspensions, but none of them have happened on such a national stage. That’s all the more reason to suspend Gurriel, but it’s also a reason for the league to shrink away and not want to radically change the landscape of the series by taking one of the Astros’ best players out of the equation.

It remains to be seen whether or not Manfred will do the right thing or have a Roger Goodell moment. If Gurriel is given a suspension, he’ll also have the right to appeal, and that appeals process could last until after the series is already over.

Darvish, for his part, understandably wasn’t happy, but took the high road in response.

Yu Darvish is aware of Yuli Gurriel’s gesture. Said it was “disrespectful.” “I’m sure the Astros have Asian fans too”

The Dodgers are in a tough spot. They’ll need a strong performance from a starter who hasn’t thrown much in the last month, and they’ll need their offense to put the hurt on Charlie Morton. Morton, when he’s on, is very good. When he’s not, he’s Charlie Morton.