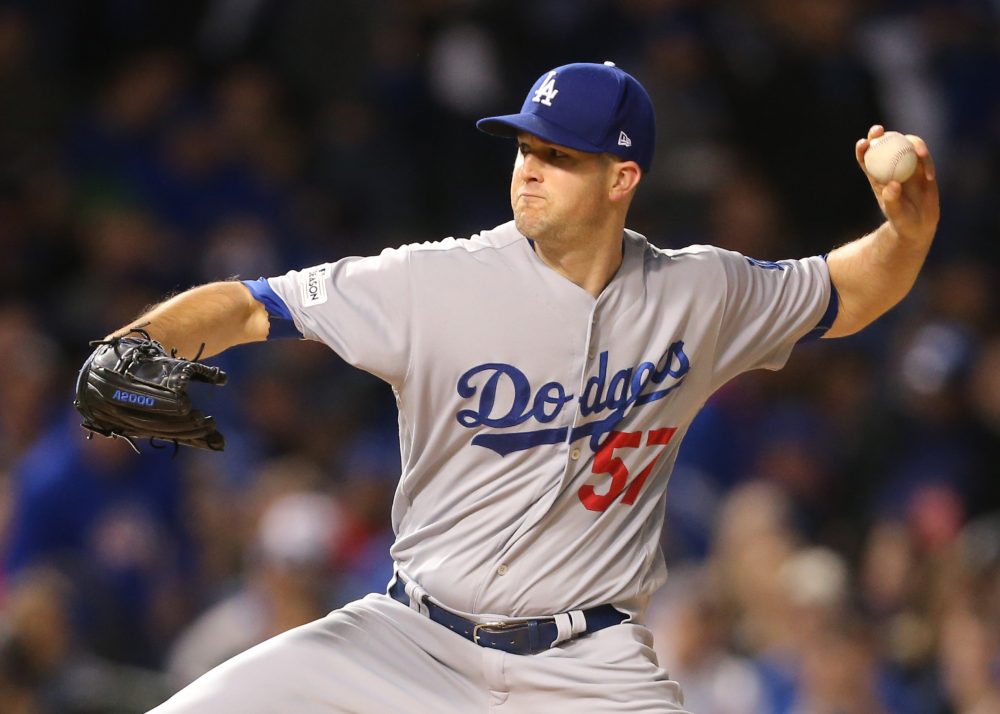 Through the first 16 innings of the World Series, Dodgers pitchers had allowed only two runs to Houston batters, and the question was whether the Houston bats, best in the majors this year (.281 TAv), would get going. Eleven runs allowed in 12 innings later, the burden has fallen on left-hander Alex Wood to keep Houston off the board in Game 4—or the Dodgers will fall behind, three games to one.

Wood ended the regular season by allowing six runs in 18 innings. He took the loss in Game 4 of the NLCS, striking out seven and walking none in 4 2/3 innings but giving up three home runs. The Dodgers lost 3-2 in the only game of the series that the Cubs won.

Wood’s mound opponent will be right-hander Charlie Morton, who tag-teamed with Lance McCullers to shut down the Yankees in the seventh game of the ALCS, sending Houston to the second World Series in franchise history. McCullers, of course, won’t be available tonight, having logged 5 1/3 innings Friday night.

We’re in the middle of a three-day stretch of consecutive games, so pitcher fatigue becomes a factor. We shouldn’t expect to see either of the starters that the teams have used thus far. For the Dodgers, Kenta Maeda threw 2 2/3 innings of sparkling relief last night and won’t be available. Los Angeles used four other relievers, none for more than 1 1/3 innings. For Houston, Brad Peacock went 3 2/3 hitless innings for his first major-league save (which also tied for the second-longest save in World Series history) and won’t pitch tonight.

Neither team is dealing with injury issues.

The Astros’ righty-heavy lineup would seem well-suited for left-handed pitchers, though they hit better against northpaws (.827 OPS) than southpaws (.814) this year. In the Series, they’ve managed only two earned runs, nine hits, and five walks in 14 1/3 innings against Dodgers left-handers, striking out 19 times. (Granted, seven of those innings came against Clayton Kershaw.) So, rather than point to the platoon advantage, the more relevant statistics are Wood’s 2.72 ERA, 3.33 FIP, and 3.44 DRA during the regular season, compared to Morton’s 3.62, 3.44, and 3.46, respectively. The pitching matchup thus appears to be pretty even.

Morton, who threw a larger-than-usual proportion of curveballs in his previous start, will try to match McCullers’ success with the pitch. McCullers threw 53 curves against the Dodgers—34 for strikes. Los Angeles swung at 26 curves and whiffed eight times. Expect Morton to emphasize the deuce against LA, though with less success than McCullers. Wood throws a two-seam fastball about half of the time, a curve about a quarter of the time, and a changeup the remaining quarter.

Morton allowed a .544 OPS the first time through the order this season, .789 the second and third time. So, unless he’s dealing, as he was in the ALCS clinching game, he’s not likely to go deep. Wood actually pitched better the second time through the order (.597 OPS) than the first (.643), though he allowed a .699 OPS the third time he faced opposing batters in the game.

As a result, it’s reasonable to expect Wood to pitch longer than Morton, all things being equal. That, however, is tempered by the exigencies of the Dodgers’ position in the Series. Dodgers manager Dave Roberts will want to avoid trailing 3-1, so Wood will likely be on a short leash.

The Astros have the fresher bullpen. Peacock is the only reliever who’s pitched since Wednesday. The wild 11-inning, 7-6 game Wednesday had Will Harris and Joe Musgrove, both of whom seemed to have lost manager A.J. Hinch’s confidence in the ALCS, pitch a scoreless inning apiece. They could provide a bridge to closer Ken Giles (who’s been shaky himself, allowing at least one run in five of his six relief appearances during the postseason). Musgrove, who had 24 appearances of more than an inning in the regular season, could be called upon to do so tonight.

On the Dodgers side, in addition to Maeda, relievers Tony Watson, Brandon Morrow, Tony Cingrani, and Ross Stripling all pitched in Game 3. Only Stripling lasted more than an inning, so at least the former three should be available. However, of the quartet, Watson’s the only one to have thrown in consecutive games more than seven times this year, doing so 16 times. So the roles upon which Morrow, Cingrani, and possibly Stripling could be called could be unfamiliar.

The Dodgers have gotten little production from their biggest bats. Los Angeles had six players with a TAv over .290 during the regular season: Turner, Bellinger, Barnes, Taylor, Seager, and Puig. Through three games, they’re hitting a combined .138/.200/.323. Bellinger, who wore a golden sombrero last night, has struck out in all but four of his 11 World Series plate appearances. It’s unlikely that the six will continue to be this feeble, but it’s hard to see the Dodgers winning without at least a couple of their bats coming alive.

Wood has faced the Astros once in his career. On June 25, 2014, he pitched the first seven innings of a 4-0 Braves victory over Houston, allowing three hits and a walk. That tells us nothing; the only current Astros in the lineup that day were Springer and Altuve. Morton has faced the Dodgers twice; surrendering six runs in six innings in a game in 2010, and five in five innings in a game in 2015. That, too, tells us nothing.

Since the 1994 strike, there have been 22 World Series. The team that won the fourth game has taken 17 of those. While not quite telling us nothing, this is a silly statistic that doesn’t convey as much information as it might seem. But an Astros victory would put Houston ahead, three games to one, putting them in a position to run that stretch to 18 wins in 23 Series.

On the other hand: Do you recall the previous time that a team fell behind 3-1 in the World Series by losing Game 4 on the road, as could happen to the Dodgers tonight?

That would be the Cubs, last year.