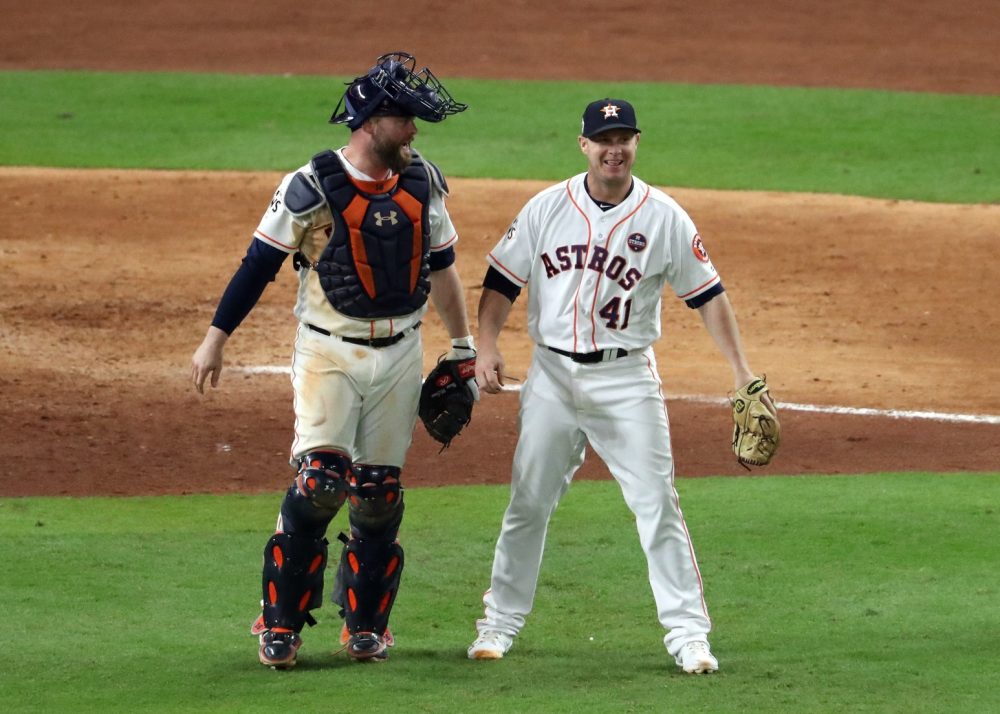 If you hadn’t watched Game 3 of the World Series and were told afterward that Brad Peacock pitched the final 3 2/3 innings for the Astros, the natural assumption would be that Houston either fell behind big early or got ahead big early and simply let him soak up the remaining innings of a blowout rather than burning through multiple relievers. What you almost certainly would not assume—even if you were, say, Brad Peacock—is that he got the final 11 outs in a 5-3 win for the Astros, putting them up 2-1 in the series.

Moments after the final out, Ken Rosenthal asked a euphoric Peacock if he had expected to finish the game when he entered with one out in the sixth inning, to which the right-hander bluntly replied: “Absolutely not.” Back in the clubhouse, after some time to let the experience sink in, Peacock told reporters that he “was shocked” when manager A.J. Hinch told him to go back out for the ninth inning, no doubt figuring that the two-run lead was Ken Giles‘ save to convert.

Peacock came into this season as a 29-year-old former 41st-round draft pick with a 4.57 ERA. He broke out with a 3.00 ERA and 161 strikeouts in 132 innings split between the bullpen and rotation, but had not been a big part of the Astros’ postseason success. Peacock started Game 3 of the ALDS, but failed to make it out of the third inning. He later appeared three times as a reliever, entering games with the Astros down multiple runs each time and allowing a 1.242 OPS in low-leverage work spanning 2 2/3 innings. In fact, the only time all year Peacock made what could be described as a high-leverage relief appearance was his very first outing, April 5, as the seventh pitcher in a 13-inning game.

Peacock has been really, really good this season—and in such a way that our own Matthew Trueblood took stock of his in-progress breakout back in June—but there was little to suggest that the Astros viewed him as a multi-inning, high-leverage weapon to be deployed in Game 3 of the World Series. In retrospect, the one hint was Hinch successfully trying something very similar in Game 7 of the ALCS, removing starter Charlie Morton after five innings and allowing Lance McCullers to throw the final four innings of a 4-0 victory over the Yankees.

Houston’s bullpen has been shaky enough this postseason that Hinch has clearly tried to avoid his normal usage pattern late in several games. However, after a scheduled day off left them fully rested—and perhaps gave Hinch a chance to get more than six outs from the setup/closer combo of Chris Devenski and Giles—it seemed likely that it would be business as usual if they got to the seventh inning with a lead. Instead, with the script flipped and McCullers starting—and Morton unavailable in relief because he’s scheduled to start Game 4—it was Peacock filling the role of long reliever, setup man, and closer.

The move is certainly not without precedent, given that Hinch did it less than a week ago, but… well, here’s the complete list of every pitcher to record a save of 10 or more outs in the playoffs since 1985:

That’s the entire list, in three-plus decades: Bumgarner capping one of the most memorable postseason pitching runs of all time, and Hinch foregoing his normal bullpen usage in favor of McCullers and Peacock twice in the span of less than a week. If you’re not quite sure how to make sense of that, you’re not alone. Peacock got the final 11 outs and McCullers got the final 12 outs during a postseason in which starting pitchers have failed to record more than 10 outs on 15 different occasions (including Peacock’s lone start and Yu Darvish last night against the Astros).

This past week, McCullers threw 24 consecutive curveballs in shutting down the Yankees in the ALCS. Last night, Peacock threw a fastball on 47 of 53 pitches, and in watching him shut down the Dodgers it was remarkable how often they swung through two- and four-seamers in the middle of the strike zone.

“He’s got a really effective fastball,” said Cody Bellinger, who struck out on a 3-2 fastball down the middle to end the eighth inning. “It’s pretty deceiving. I don’t know what he does to it.”

Peacock even admitted: “They were taking some bad swings at my fastball.”

Hinch indicated afterward that Peacock finishing the game was not his plan initially, but he adjusted on the fly:

“We all watched the game, it was pretty obvious, he was cruising. Their swings weren’t good. His fastball was playing, his slider was playing. … There’s no reason to take him out. He was in complete control of every at-bat. So why not leave him in? … I love our bullpen, and our bullpen is going to get outs, but this is a race to 27 outs with a lead. When a guy is doing his job, there’s only so much explanation I need to give.”

Peacock’s one-man bullpen act provides both good news and bad news for the Astros heading into Game 4. The good news is that the entire bullpen has now had two days to rest—meaning Giles, Devenski, and everyone else is fully available in relief of what figures to be another abbreviated Morton start. The bad news is that Hinch not trusting his usual relievers is part of what led to Peacock and McCullers closing out games as tandem starters in the first place, and he’s already used up those weapons for at least the next two games.

You need to be logged in to comment. Login or Subscribe
Arthur Copeland
"When a guy is doing his job, there’s only so much explanation I need to give.”"

This! I fully understand 3rd-time-thru-the-lineup penalties, platoon advantage, and all the modern reasons for increased bullpen usage. But how many times, watching a game, do you see a manager pull a reliever who is cruising to bring in a guy who just does not have it that night. The more guys you bring in, the more chance you find the guy who stinks that night.

Of course, I'm a Reds fan, so that really increases the odds too.
Reply to Arthur