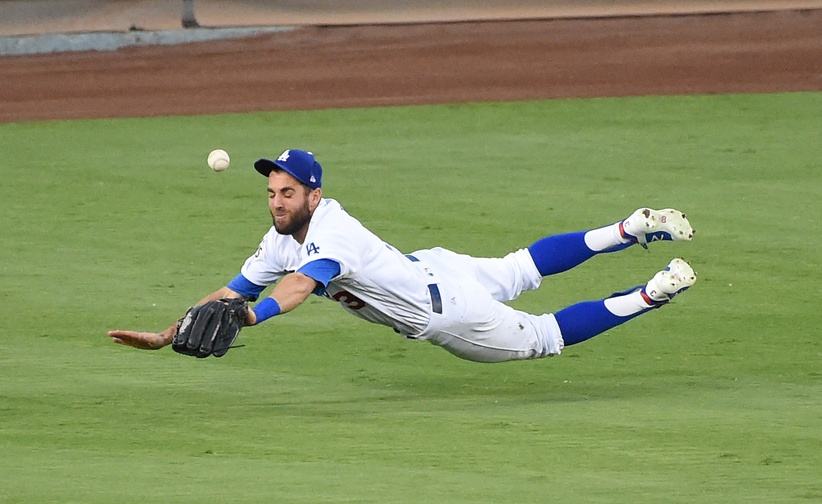 Through the first two innings of Game 2, Rich Hill faced seven batters. To all but two of them, his first pitch was a four-seam fastball. He threw a four-seam fastball to George Springer for the first pitch of the game. He threw a four-seam fastball to Josh Reddick to start the third inning, and when he threw the same pitch again, Reddick recognized what was coming. He pounced on it, shooting the ball to Chase Utley just hard enough that the second baseman couldn’t corral it to make the throw. It was the game’s first hit, and Reddick would very soon score the game’s first run.

This all made perfect sense. This was a neat, tidy example of the kind of pattern-based interaction that is the foundation of baseball. A pitcher tries to disrupt the patterns of the batter. The batter tries to disrupt the patterns of the pitcher. Fielders position themselves in accordance with where they know a ball will typically be hit, and they come to understand, intimately and innately, the manner in which a batted ball typically behaves. Baseball players know where the ball is to be thrown in a given situation. They know how many strikes make an out. They know how many outs make an inning. They feel it, the way you feel your heartbeat.

The way that we describe a pitcher who is pitching particularly well as having “settled into a groove,” like a drummer who’s in the pocket, is really an apt metaphor. Because in a lot of ways, baseball is like jazz. There are chord changes, rhythms, and rules that form the basic structure; the interest comes in what you can build out of those familiar patterns, how you can recognize them and find new possibilities within them. That’s why baseball is so comfortingly familiar, and yet endlessly surprising. It follows a predictable pattern, the same old blues progression we’ve heard a thousand times before, but in the details of the improvisation, in the singularity and the interplay of the performances, it still feels fresh and new.

Even the most gifted soloists have their favorite licks—the ones that they turn to again and again, knowing that when a certain chord change comes up, they can rely on it, trust it, build better ideas off of it. Given a fixed structure to follow, there will always be an element of predictability. So when Alex Bregman came up to bat in the third inning, with two men on and one out, Hill turned to a favorite lick. This season, when facing a right-handed batter, Hill threw a first-pitch, four-seam fastball 70 percent of the time. In this situation, he knew that he trusted this pitch. So he threw it. And Bregman, himself an astute soloist, an expert in the rhythms of baseball, recognized Hill’s pattern. 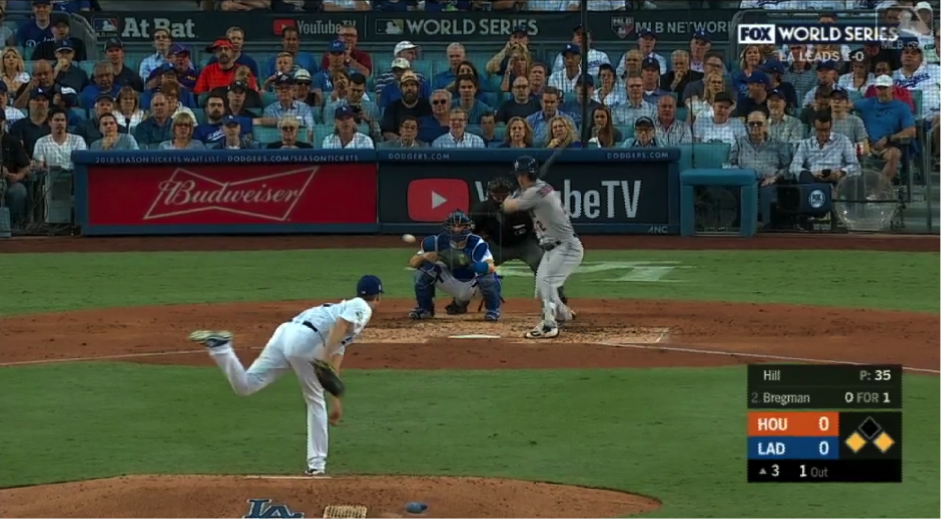 He turned on Hill’s fastball and roped it into left-center field. It would have been an incredible feat if Chris Taylor had been able to catch that ball—a moment of pure, transcendent skill—but as he dove, it became clear that the ball was going to fall. It was going to reach the wall, and with Springer’s speed at first base, two runs were likely going to score.

Chris Taylor, a baseball player, was wearing a baseball hat last night. And that fact changed the entire game.

Does that make sense at all?

Live improvisation is a strange beast. While you are largely in control of the quality of your performance, you are still subject to various vagaries of man and god. Sometimes your fellow performers screw up in a fundamental way—the pianist plays a bum chord, the drummer speeds up—leaving you in a momentary panic. Sometimes the audience isn’t giving you anything, sucking the energy from your performance. These human errors can usually be played around, recovered from. You just have to find the groove again. The performance proceeds. Errors are just part of human activity, part of being a performer.

The acts of god, though—those change things. They stand out. When you’re playing a show, and all of a sudden some barely perceptible gust of wind from an indeterminate source somehow happens to blow all of your music off the stand, you notice. And the audience notices. You are, for that instant, out of the pattern, out of the rhythm, in completely unknown territory. Something you took for granted, something so essential that you hardly remembered it was there, has now altered your performance in a significant way. It stands out. It is a moment of bizarre, crystalline unfamiliarity.

And even after you get back into the groove—because you will, of course you will, you’re a professional—it’s still there, in the back of your mind. How in the world did that happen? And how would things have gone if it hadn’t?

Back to the game. We were in a moment where baseball made sense. Bregman had recognized Hill’s first-pitch fastball, and he had turned on it, and he had hit it hard into left-center field. And Taylor was diving. He was diving, and he was about to miss the ball. That’s a play that happens in baseball. This was a new iteration of it, in a new instant with new players, but it was a familiar, known pattern. We’ve all seen it happen before.

Except for the fact that Chris Taylor was wearing a baseball hat.

But the baseball hat—it disrupted the pattern. It was a moment of sheer absurdity, of a previously inactive object making its presence abruptly, actively felt, and it changed the rhythm of the game. How in the world did that happen? If Taylor’s hat had been slightly further back on his head, or slightly downturned, perhaps the ball wouldn’t have caromed at the exact angle that it did, right to the waiting Joc Pederson. There was no precedent for this play, no pattern for Taylor to read. The fact that Chris Taylor was wearing a baseball hat was an extraneous detail, utterly irrelevant to the game of baseball—until, all of a sudden, it was.

Last night’s game will probably be remembered as one of the most exciting in recent memory, if not in World Series history. There were extra-inning dramatics; one of baseball’s best closers blew the save; there were double-switches and bat-flips and so, so many homers. It was a game that reminds you why you like watching this sport: a beautiful, thrilling four-hour piece of baseball artistry, played by two spectacularly talented teams, playing off of each other with rhythms and riffs that soared, fell, dazzled, taking the beats of the game you know so well and making their own unforgettable example of it.

In the top of the third inning, with two men on and one out, Bregman recognized Hill’s pattern. Hill threw a first-pitch fastball to right-handed batters 70 percent of the time this season. So Bregman turned on it, sent the ball into left-center field. And who’s to say what might have happened if the Astros, at that point, had led the game 2-0? How would the players have responded to that situation, and how would their rhythms have changed? Would the game have been smoother, more familiar, less unpredictable, less wild?

But Chris Taylor is a baseball player, and he was wearing a baseball hat. Somehow, that made all the difference.

You need to be logged in to comment. Login or Subscribe
mbrown@nwicc.edu
Wow, interesting, thoughtful, philosophical piece. Thanks for capturing this game in a beautiful way.
Reply to mbrown@nwicc.edu