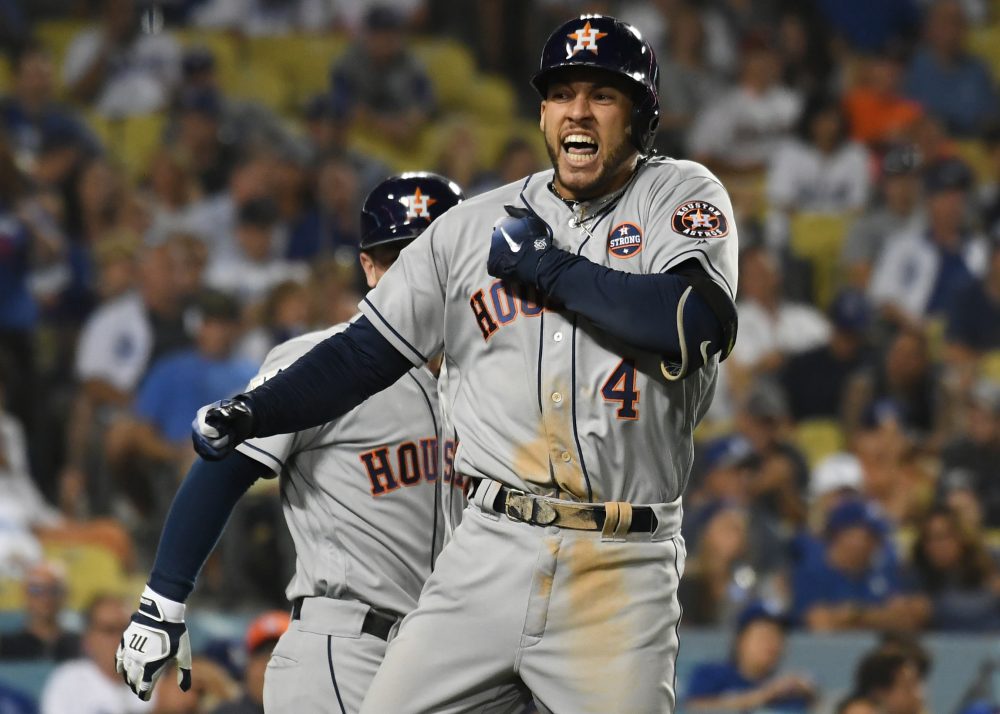 I’m just going to say it: Game 2 of the World Series was bananas. Other people are going to use words that are more proper and perhaps more poetic or flowery, but I’m opting to use bananas—because what happened in the final four innings of the game were unlike anything I have seen before in my nearly 40 years of watching baseball.

Before we get to those innings, and the rest of the game, let’s talk what happened before the start of Game 2, because it’s noteworthy. The night began with a ceremonial first pitch for the ages, with retired Dodgers broadcaster Vin Scully returning to Dodger Stadium to do the honors. But, because it was Vin Scully, this was no ordinary walking-to-the-mound and tossing-the-ball-to-a-current-player type of ceremonial first pitch. The Dodgers pulled out all of the stops to make it a truly memorable and touching event for the fans in the ballpark and for baseball fans across the country watching on TV.

With Scully narrating his trip to the mound, he first called upon catcher Steve Yaeger to receive his pitch, then in an adorable manner only Vin Scully can get away with, he faked a shoulder injury, made a “call” to the bullpen and summoned Fernando Valenzuela to relieve him. After Valenzuela delivered the pitch, Scully led the crowd in his famous, “It’s time for Dodger baseball” call.

When it was time for Rich Hill to throw a baseball, well, it wasn’t great. At least not at first. He walked George Springer and nearly walked Alex Bregman, but Bregman was all in on Hill’s 3-1 pitch and skied it for a pop-up next to the plate for the first out of the inning. Jose Altuve looked bad striking out swinging, and Carlos Correa flied out to end the inning.

Rich Hill all over the place in the 1st but gets out of it… pic.twitter.com/hUMPUZIWcb

Hill escaped with no damage and after looking a little too amped to start the frame, though he threw only 18 pitches.

Justin Verlander had a strong bottom half, striking out Chris Taylor and Corey Seager swinging, and getting Justin Turner to fly out. He only threw 11 pitches; seven were strikes.

Hill got into some trouble in the top of the third when Josh Reddick led off with a single. Verlander helped his cause by laying down a pretty nice bunt that advanced Reddick to second. Springer also singled, but to left, and Reddick stayed at second base. Then this play happened:

I guess you can say the Dodgers were saved by the bill because, after that, Hill struck out Altuve and Correa to end the inning. The Dodgers escaped having given up one run.

Verlander set the Dodgers down in order in the third and worked around a lead-off walk in the bottom of the fourth.

Now, this is when things begin to get weird. Hill was lifted after the fourth inning. He was at 60 pitches, had seven strikeouts, gave up three walks, while giving up a run and three hits. Kenta Maeda came in for the Dodgers in the top of the fifth inning and set the Astros down in order.

Verlander was working a no-hitter, so of course Joc Pederson would hit the game’s first home run to tie the score at 1.

In the bottom of the sixth, something else weird happened, at least virtually. I didn’t notice it right away. I had to rewind the DVR to see it but Springer’s head disappeared into the Chase Masterpass ad in centerfield on this Chase Utley fly ball: 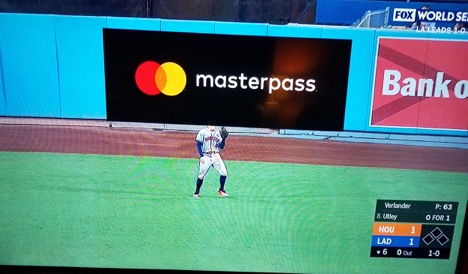 It was pretty freaky. Andre Either later hit a ball to almost the same spot but, that time, Springer’s head remained intact. Verlander walked Chris Taylor with two outs which set up this moment:

Corey Seager went the opposite way to break the tie and put the Dodgers up, 3-1.

Corey Seager‘s HR was off a 97.3 MPH Verlander fastball… The 3rd hardest pitch the @Dodgers have hit for a HR this season.

If these events seemed awfully familiar, it’s because the Dodgers copied how they took the lead in Game 1 on Tuesday night, when Chris Taylor reached with two outs, and Justin Turner followed with a two-run homer.  But Wednesday is not Tuesday, and Wednesday’s game would not end like Tuesday’s game.

They weren’t close to done.

Alex Bregman started off the top of the eighth by hitting a ground-rule double just out of Puig’s reach. Puig took out his frustration at not having caught the ball on his glove.

Honestly, if Puig had made the catch, it would be on highlight reels for 100 years, or whatever they’ll show highlights on 100 years from now. It’s hard to make a play on a ball going away from you like that, and the fact that he even got his glove on it is incredible.

Skipper Dave Roberts called upon Kenley Jansen to get six outs after the Bregman double and while he got three outs in the eighth, he did allow a run to score on a Correa single.

The Dodgers were set down in order by reliever Will Harris in the bottom of the eighth and this is big because in the top of the ninth, Jansen did something he had never done before: He blew a postseason save by surrendering a game-tying home run to Marwin Gonzalez.

The only other blown save in Dodgers World Series history occurred nearly 40 years ago in 1978 when Terry Forster blew a save against the Yankees in Game 4 at Yankee Stadium.

After the Dodgers went down in order in the bottom of the ninth, Roberts replaced Jansen with Josh Fields and it didn’t go very well.

First, Altuve hit a home run to put the Astros up 4-3.

And then Correa followed him with another homerun to put them up 5-3.

They became the first players in World Series history to hit back-to-back home runs in extra innings. Yuli Gurriel followed with a double, and Roberts had no choice but to pull Fields from the game—still with no outs. The Dodgers bullpen had allowed more earned runs in this game (four) than in their first nine postseason games combined (three). What did I say about this game being bananas?

And they still weren’t done, because after Tony Cingrani got the Dodgers out of the inning without further damage, Puig led off the bottom of the 10th with a home run against Astros’ closer Ken Giles.

After Yasmani Grandal struck out, Logan Forsythe worked a walk and advanced to second on a wild pitch. This is important because it put the tying run on second and well, you probably know the rest.

Of course Kiké Hernandez would hit an RBI single to tie the game at 5—because this game was bananas.

Brandon McCarthy, who hadn’t pitched since Oct. 1, and who was a surprise addition to the World Series roster, was the last man standing in the Dodgers’ bullpen, so he started the 11th and naturally he gave up a single to Cameron Maybin,who had come into the game in the 10th for Giles.

While George Springer was at the plate, Maybin stole second base and everyone in America can now get a free Taco on Nov. 1!

And then this happened. A Springer dinger.

It was the fourth extra-inning home run in the game and it wasn’t the last one because after McCarthy finished the inning without giving up any more runs, it was, once again, the Dodgers’ turn to hit a homerun and this time, Charlie Culberson got in on the act.

It was only a solo shot which would pull them to within a run. But regrettably for the home team, it would be all the Dodgers’ would get in the bottom of the 11th. After flipping a switch in the eighth, the Astros stole a game from the Dodgers in Los Angeles and tied the series at one game apiece.

And while Tuesday night’s game was a tidy 2:28 affair, Wednesday night’s game was a 4:19 home run fueled, heavyweight fight. On the Fox TV postgame, Alex Rodriguez compared the Astros to Rocky Balboa in Rocky IV when he fought the Russian boxer Ivan Drago. And it’s a great analogy. Remember how Rocky was being pummeled by Drago and how suddenly it was as if a switch was flipped and Rocky turned it around, eventually winning the fight? That’s what the Astros did on Wednesday night!

They were on the ropes in the last rounds of Game 2, but fought back to win. Now they’re heading home with the series tied instead of being down 0-2.

So buckle up. We have a Series, everyone!