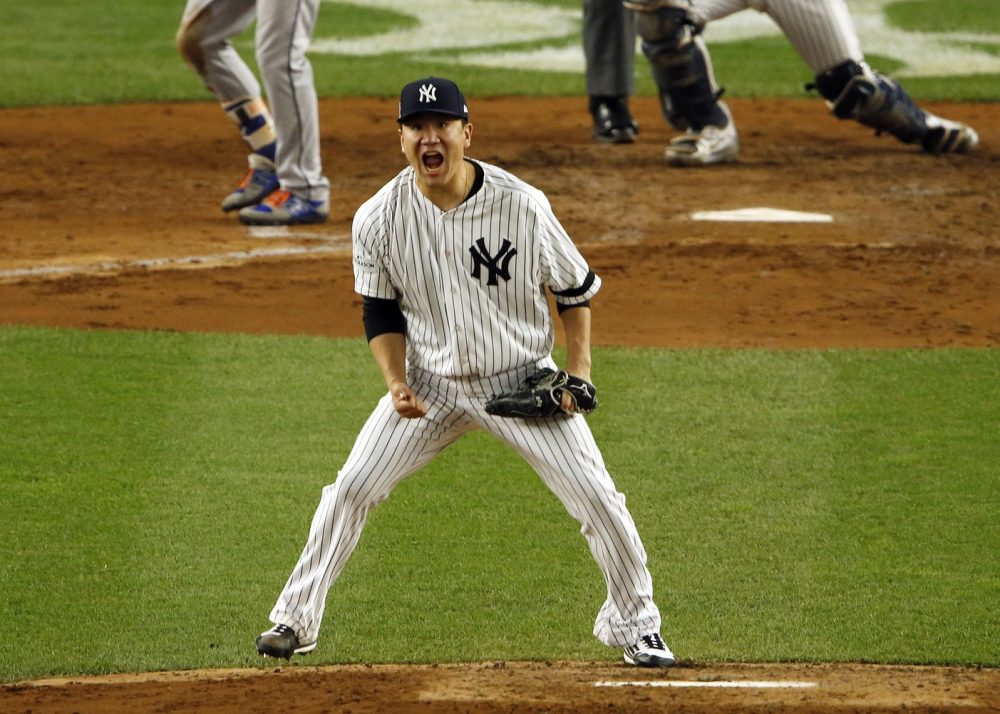 Joe Girardi was the buffoon, the manager who didn’t call for a replay on an obvious foul ball, the field general who allegedly mismanaged his bullpen and single-handedly put his Yankees into a 2-0 hole against Cleveland in the ALDS.

That was 12 nights ago. Last night, Girardi moved one victory away from his fifth World Series appearance and his second as Yankees manager.

On Thursday night the Yankees played the 390th postseason game in their storied history and notched their 230th win. In the analytic world we inhabit, we understand facts like these don’t matter, that what is past is not prologue, that what happened in the 1920s has absolutely no bearing on the game we’re watching in 2017. “You are standing and cheering and rooting for your clothes to beat the clothes from another city,” Jerry Seinfeld once wisely quipped. Heck, even the 2012 squad–the last edition of the Bronx Bombers to advance to the ALCS–shares only three players with this team.

It’s difficult to watch the Yankees in the postseason and not feel the familiar tug of history, the déjà vu all over again Yogi Berra purportedly referenced when watching Mickey Mantle and Roger Maris blast home runs in 1961, the feeling that the ghosts of All Hallows’ Eve have arrived a couple weeks early and are lingering in the bowels of Yankee Stadium for yet another memorable October. The logical halves of our baseball brains know attributing yet another Yankees victory to the Ghosts of Postseasons Past is silly and reductive. The emotional halves of our brains concur, yet know that it cannot be helped.

The hard-headed, bare-boned fact of the matter is that the Astros were relying on the formidable one-two punch of Dallas Keuchel and Justin Verlander to win them Games 5 and 6 and take Houston to their second World Series ever and their first Fall Classic as a member of the Junior Circuit. It certainly wasn’t viewed as a fait accompli, but given Keuchel’s success against the Yankees many liked their chances. PECOTA gave the Astros a 51 percent chance to win, a virtual coin flip in a road game.

Instead, the Yankees got to Keuchel early and for all practical purposes before the contest even started. It wasn’t courtesy of the Yankees’ favorite in-season weapon, the 241 long balls that led the majors and bludgeoned their opponents throughout the regular season. Gary Sanchez blasted a late home run off reliever Brad Peacock, but most of the evening was an exercise in the Yankees taking what Keuchel allowed, striking out eight times but driving the ball into gaps and past diving infielders when they did make contact, altering their collective approach to do their damage in dribs and drabs and by a thousand cuts.

To hear the talking heads in the broadcast booth tell it, Keuchel was untouchable in 2017. Reality tells a different tale. Keuchel surrendered three earned runs or more in six of his 23 regular-season starts, including a seven-start stretch from August 8 to September 10 during which he posted a 4.70 ERA in 44 innings. When he’s on his game he’s nearly impossible to defeat, but then this can be said about a score of hurlers plying their trade in the majors.

One pitcher who also fits this description when he’s at his best was Keuchel’s opponent, the indomitable Masahiro Tanaka. When Brian Cashman lured the Japanese hurler across the Pacific in January 2014 with a seven-year, $155 million contract, surely it was this type of must-win game the general manager was envisioning. Four years after donning the pinstripes, Tanaka is having the kind of postseason that turns Yankees into legends.

Tanaka was the story of Game 5 and the reason the Yankees are one victory away from the 41st World Series appearance in franchise history. He kept his steady diet of sliders, four-seamers, and splitters down in the zone and occasionally darting beneath it, giving the Astros precious few opportunities to drive the ball, forcing them to pound it into the ground when they weren’t flailing and missing completely.

Conventional wisdom touted the Yankees’ bullpen as the reason they were potentially such a dangerous team in October despite “only” 92 regular-season wins. This storyline shortchanges the rest of the team, particularly an offense that socked 241 home runs and scored 858 runs. To benefit from a stacked bullpen, you must deliver them a lead, something the Yankees were unable to do during the first two games in Houston. Once the series shifted to New York that changed in a hurry.

A team swinging for the fences would have trouble hitting a pitcher like Keuchel, a ground-ball automaton whose 67 percent rate would have led the league easily had he qualified for the ERA title. Instead, the Yankees altered their fly-ball heavy approach. Greg Bird’s second-inning RBI single came on a ball that tickled the black on the inside of the plate. Aaron Judge’s third-inning RBI doubled was a similar story, an inside breaker he muscled past a diving Alex Bregman and down the third base line. The tale of the Yankees’ night was mostly Tanaka, but also of an offense that punished nearly every Keuchel offering that was anything less than perfect.

Judge’s turnaround in the playoffs has been even more dramatic than Girardi’s. The naysayers have been obsessed with Judge’s low batting average and high strikeout totals, ignoring the fact that even when he’s slumping Judge’s walks count for something. Even Judge’s outs have the potential to impact New York’s opponents, as Jesse Spector of FanRag Sports noted after the ALDS.

Judge saw 134 pitches in the ALDS — 5.58 per plate appearance. That’s not insignificant, even if those PAs were almost all fruitless.

Judge’s persistence at the plate doesn’t always lead to a walk, but it frequently does lead to a long and drawn out battle with the opposing pitcher. These at-bats aren’t gimmies or rudimentary exercises in good morning, good afternoon, and good night, but rather a marathon for the opposing pitcher, who knows a mistake pitch is likely to be launched into the seats. More importantly, Judge has improved as the playoffs have continued deeper into October.

The same could be said for most of Judge’s teammates. Outside of their losing Wild Card game against Keuchel in 2015, playoff experience is hard to find on this edition of the Yankees, but the experience of the postseason they are currently playing should not be cast aside or ignored entirely. It’s too early to tell if this is the beginning of the next great Yankees dynasty or a one-year blip on the radar, but the 2017 version of the Yankees is legitimate.

It’s difficult go on at great length about a contest that was a 5-0 whitewash, a one-sided affair that left the Yankees on the precipice of doing the thing they were seemingly put on this earth to do. It’s quite possible that the Astros will not go gently into that good night, particularly with two potential games at home and with Verlander on the bump for the next one. But for now, the Yankees have the wind at their backs and look like they are more than capable of defying the odds and becoming the sixth team in history to defeat two 100-plus win teams in the playoffs in the same campaign.

The “Evil Empire” isn’t supposed to don Cinderella’s glass slipper, but in a year that was supposed to be a transitional campaign for Cashman’s Yankees, anything seems possible.