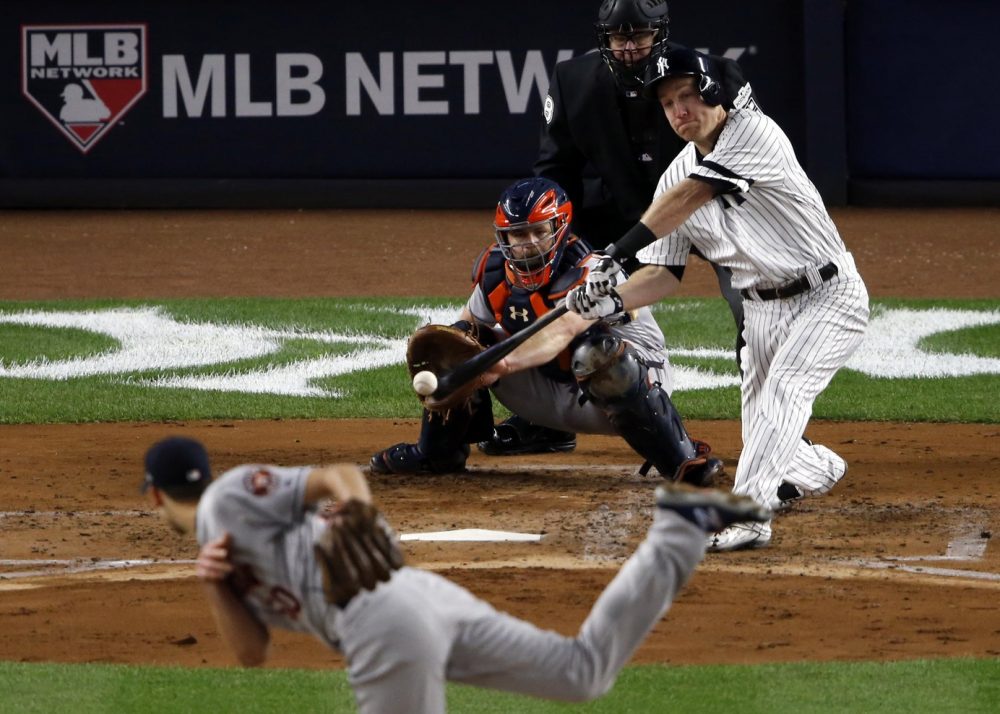 Everyone, no matter how confident or powerful, has days when everything is just … off. When, whether in small ways or large, things just seem to go wrong for you. Sometimes it’s because your day started off poorly—you didn’t get enough sleep, or had your rest disturbed by nightmares, or realized upon waking that you had failed to complete some important task. Sometimes the trouble has been following you for a while, weeks or months or years that seem to have gotten away from you. And sometimes, on the most frustrating days, there’s no reason for what’s happening. You don’t know what you’re doing wrong. It just keeps happening, and happening, and all you can do is wait: wait for the day to be over, for the hammer of misfortune to do its worst, for a chance to hit reset and try again.

There was little reason for the Astros to feel anything other than confident heading into Game 3 of the ALCS. They are an excellent baseball team with a 2-0 series lead, and though starter Charlie Morton is no Dallas Keuchel or Justin Verlander, he is a quality pitcher having a career season. The Astros’ lineup, too, is indisputably powerful, and despite being held to only four runs over the first two games of the series by the Yankees’ pitching staff, those runs had been enough. They’d had their day of rest, and now was their chance to take a 3-0 stranglehold on the series.

But there was just something … off for the Astros last night. Everything went wrong, and then proceeded worse. Bunts went for singles, bloops preceded homers, and homers came on pitches that shouldn’t have gone for homers. And after only four innings, the Astros found themselves already facing a loss—one of those nights that just got away from them.

It started out well. While the Astros’ hitters went quietly in the top of the first inning, Morton looked sharp in the bottom half of the inning, striking out Brett Gardner and Aaron Judge—Gardner on a curveball in and Judge on a cutter away, both of them swinging, both of them looking foolish. Didi Gregorius, perhaps wishing to avoid this fate, poked out a bunt single, but was promptly picked off first base. All of this seemed to bode well for the Astros and poorly for the Yankees. They had, after all, won two consecutive pitchers’ duels against this Yankees team. One was almost ready to get settled in for another low-offense game, the kind that is decided by baserunning errors such as Gregorius’.

Unfortunately for the Astros, that is not what happened.

The pair of zeroes held until there were two outs in the bottom of the second, when Starlin Castro, following in Gregorius’ footsteps, swing-bunted for a single after another three-pitch strikeout by Morton. Five pitches later, Aaron Hicks hit a bloop for a single.

Still, though this situation wasn’t ideal, there were two outs. Morton had been cruising, and he’d just run into some bad luck here. Surely it couldn’t get much worse than this. Surely the Astros couldn’t possibly suffer three unlikely hits in a row. Surely just one more well-located pitch would get them out of the inning. Todd Frazier, he of the hands-free homer, somehow shot that 95 mph outside-corner fastball into the Yankee Stadium short porch. Thanks to a bunt, a bloop, and an almost impossibly unlikely home run, the Yankees had scored more runs than they had in the previous 19 innings of the series combined.

As if to rub salt in the wound, the Yankees extended the inning by asking for a review on a pitch that Chase Headley claimed had grazed his pant leg. It seemed quite clear that there was negligible evidence that the ball had made contact with him, and yet the review took an excruciatingly long time. Morton stood on the mound, unable to get himself out of the situation which he had done little to create. All he could do was wait, and ruminate on what had just occurred, and hope that he didn’t get another bad break this time.

The review eventually deemed that Headley had not been hit, and Morton finally recorded the third out of the inning. But it was too late. The damage—the frustrating, stupid, unlikely damage—had already been done.

Despite two walks and a single in the top of the third, the Astros were unable to compensate for Morton’s bad luck. And even though the Yankees went relatively quietly in the bottom of the third, there was still a moment where the misfortune seemed ready to fall on the Astros again: a great defensive play by Jose Altuve on a Gregorius ground ball initially had Gregorius safe at first. Review overturned the call, but the evidence, at least as shown on the broadcast, was dubious—Marwin Gonzalez’s spikes may or may not have been in contact with the bag. It was perhaps millimeters from being another play that the Astros had executed exactly right and had go wrong for them.

Such a play happened again in the top of the fourth, when Aaron Judge did this to perhaps the best-hit ball of the night from either team to that point:

That should have been a double for Yulieski Gurriel; off the bat, I thought it had a chance of leaving the ballpark. (Frazier’s had, after all.) Gurriel had done everything right. He had gotten ahead in the count, recognized a poorly-located sinker and crushed it, sending a searing fly ball to the opposite field. It should have given the Astros a man in scoring position with nobody out. Instead, it was just the first out of the inning.

The Astros went quickly after that. CC Sabathia only had to throw seven pitches. Verlander, the Astros’ Game 2 hero and dugout interviewee on the broadcast, could barely get a word in.

Here’s the thing about bad days: they nearly always get worse. Misfortune loves to compound on itself, to seize upon any weakness and multiply. By the time the bottom of the fourth came around, Morton was already having a bad day. He’d been pitching perfectly well, and had only three earned runs to show for it.

And it got worse. It got so, so much worse.

It began with a pop fly off the bat of Greg Bird. That was what it was—a pop fly into left field. Bird was late on the pitch, got under it. Easy out. One away. A good job done by Morton, to retire a powerful hitter.

It was a pop fly. But something strange happened on the play, allowing the ball to fall and bounce into the stands, allowing Bird to get to second safely. For some reason, Cameron Maybin just stopped. Maybe he got distracted by a screaming fan, or lost the ball in the lights. What is clear is that he should not have stopped. It was a pop fly. It went up in the air in a high, gentle arc, well within the range of an outfielder with Maybin’s speed. It should have landed in a glove; in reality, it landed in the hands of a surely elated Yankees fan as Bird chugged into second.

The greatest irony is that Morton almost got out of it. He got Castro to knock a ground ball to third, and Hicks to fly out to right. He pitched around Frazier, not wanting to get burned again by the man who’d so recently burned him, because he knew who was behind Frazier: Headley, who, like all other Yankee designated hitters this postseason, was sporting a series of zeroes underneath his name on the scoreboard. Headley was as cold as they come, and there were two outs, and this entire situation shouldn’t have happened anyway, because Bird’s double was a pop fly.

A ground ball on the infield made the game 4-0.

There’s only so much tribulation you can take without losing your composure. And Morton, having valiantly battled against the misfortune that consumed him, finally succumbed. Now facing Gardner, Morton been running his curveball inside on lefties all night—it was the pitch that Headley claimed had hit him. It was the pitch that Gardner himself had struck out on to start the game. It was a pitch that had been working for him, breaking sharply, deceiving batters. This time, though, it was just an inch too far in. It caught Gardner’s knee, loading the bases. Astros manager A.J. Hinch had seen enough; he called for Will Harris to face Judge. Morton’s night was over. There were two outs.

There has been a running theme in all of Judge’s many and well-publicized strikeouts this season. He works the count full, but he just can’t lay off that breaking pitch. Low and away. A slider, a cutter—he’ll swing and miss. That’s what you do. That’s what Morton did in the first inning, on a clean, efficient three pitches.

Fine. One run. Okay. The bases were loaded. It was already bad. It could have been worse. Just have to strike Judge out, minimize the damage. Low and away, that’s how you do it. So Harris came back with a fastball, right on the outside corner. Perfectly placed.

It was called ball two. Harris screamed audibly in frustration.

And on his fifth pitch to Judge, a pitch that wasn’t all that bad, really, that was up and in, right on the corner—the hammer of misfortune did its worst.

The Astros and Yankees will play again today, and the Astros have a good chance to win. Winning will give them an even better chance of winning the ALCS and advancing the World Series. Because, despite what the 8-1 final score of last night’s game might suggest, the Astros are very much an excellent baseball team. Outliers are not reliable indicators of reality, and last night’s game was an outlier. It was just one of those nights. When the Astros did things right, somehow, things still got worse; when they did things wrong, the mistakes were magnified to disturbing, unforeseen proportions. Everything that could have gone wrong went wrong, and for the Yankees, everything that could have gone right went right.

The Astros, though, will play again today. Because they got through that game. They got through it without allowing more runs. They avoided the shutout, and made some of the Yankees’ better relievers work. They are leading this series 2-1. And today, they can take the field and hope for a better outcome: for a chance to hit reset and try again.

You need to be logged in to comment. Login or Subscribe
jfranco77
Castro's hit in the 2nd wasn't actually a bunt - just a little nubber down to 3rd. Maybe you could call it a swinging bunt or even a bingle.
Reply to jfranco77