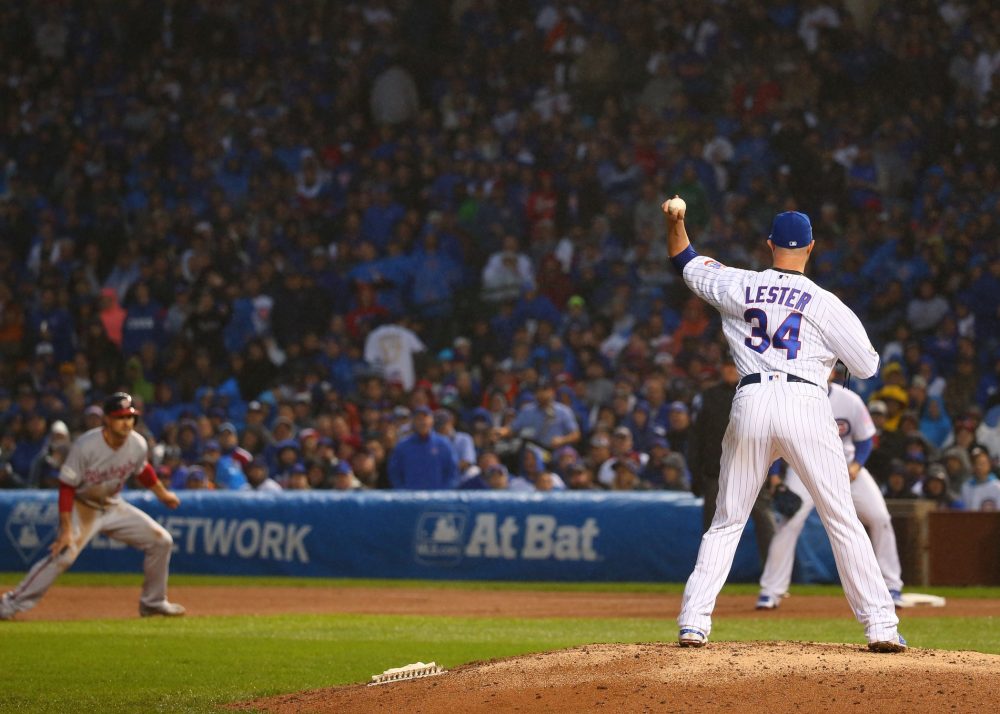 Yasiel Puig, Chris Taylor, Charlie Culberson, and four no-hit innings from the bullpen led the Dodgers to a victory in Game 1, and now Game 2 features a second straight all-lefty matchup between Jon Lester and Rich Hill.

Lester added to what was already one of the best postseason resumes of all time by tossing six innings of one-run ball against the Nationals in Game 2 of the NLDS and then coming back three days later to get 10 outs as a reliever in Game 4. He struggled for much of the season, including one clunker in two starts versus the Dodgers, but Lester finished September with back-to-back strong outings and has allowed more than three runs in just three of his 20 playoff starts. He’ll be starting three days after throwing 51 pitches in relief, but Lester has downplayed that as a potential factor.

Hill was excellent down the stretch, posting a 2.64 ERA in 15 starts after July 1 while holding opponents to a .185 batting average and racking up 116 strikeouts in 89 innings. He lasted just four mediocre innings against the Diamondbacks in his lone NLDS outing and didn’t pitch against the Cubs during the regular season, but manager Dave Roberts picked the 37-year-old Hill over Yu Darvish and Alex Wood to slot in after Clayton Kershaw in the NLCS rotation.

Corey Seager’s back injury taking him off the NLCS roster is a big blow to Los Angeles, removing an MVP-caliber player from the lineup and replacing him with a journeyman in Culberson. While he’s a left-handed hitter, Seager batted .325/.389/.527 off lefties this season and the Dodgers may see southpaw starters four times in this series. Of course, even without Seager the Dodgers’ lineup is well-suited to score against lefties, as part-timers like Barnes, Hernandez, and Forsythe take center stage in platoon roles. Only the Coors Field-aided Rockies had a higher OPS than the Dodgers versus lefties this season.

Chicago also fared well against lefties this season, and manager Joe Maddon has the ability to stack the lineup with right-handed bats if he choses to get Ian Happ and Ben Zobrist into the mix after leaving them on the bench versus Kershaw for Game 1.

Both teams lifted their starters after five innings in the series opener, but neither bullpen is very taxed because the Cubs used their second-tier relievers and no Dodgers relievers threw more than 17 pitches. With an off day looming Monday, expect to see both managers deploy a quick hook if needed, and don’t be surprised if Wade Davis and/or Kenley Jansen is asked to get more than three outs.

As great as Hill has been for the Dodgers, this is no doubt the game that the Cubs felt the most confident about taking in Los Angeles. PECOTA agrees, seeing the Dodgers as the slimmest of favorites, at home, in what is basically a coin-flip game.