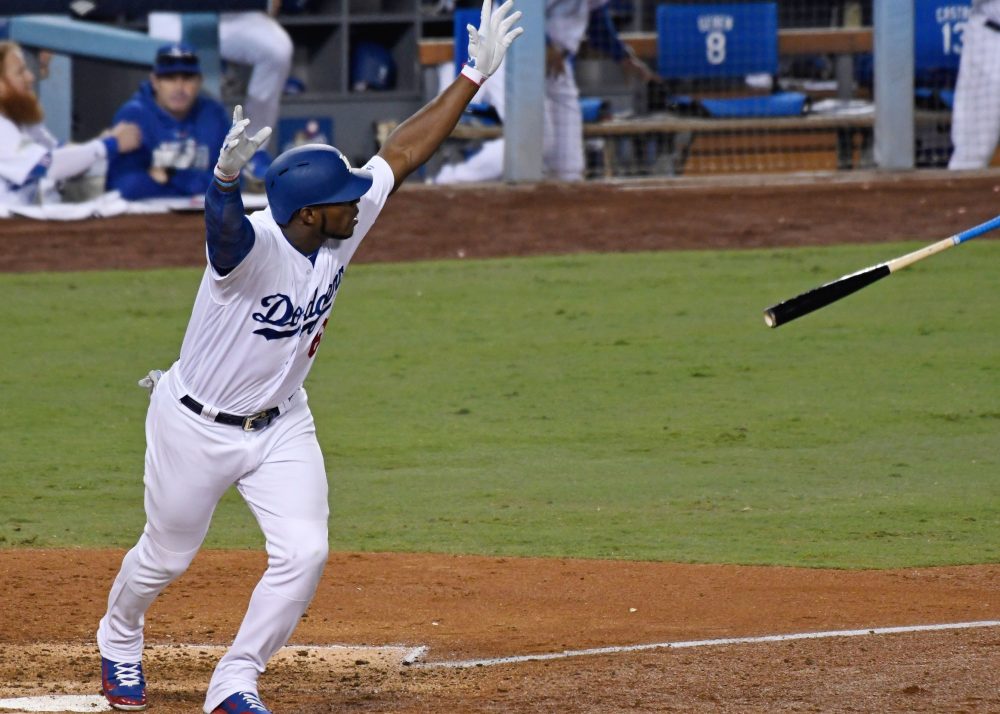 We like to fit baseball players into little boxes—pat narratives that tell what can sometimes be complicated stories quickly and easily.

Sometimes, we’re right on—Kenley Jansen has been placed in the box of historically unhittable closers, the closest thing we have to a successor to Mariano Rivera, and he’s sure looking like that right now. Cody Bellinger seems perfectly comfortable playing the role of emerging five-tool superstar.

But the Dodgers, in assembling a roster filled with players filling very specific roles, have brought together a group that defies many of their own personal narratives. And it was those players who carried the day for most of the NLCS opener against the Cubs.

The box we’ve made for Clayton Kershaw is that he’s the greatest of his generation in the regular season, but doesn’t get it done in the playoffs. His career postseason ERA now sits at a merely average 4.57 in more than 100 innings. This is the fifth time the Dodgers have made the NLCS during his career, and he’s yet to win a pennant. But to claim that Kershaw will continue to be mediocre based on a relatively small sample spread over the course of eight seasons, you have to willfully ignore the half-dozen or so times he’s been absolutely brilliant in clutch playoff appearances, often with the team around him in chaos.

In a three-start stretch to open the 2013 postseason, he allowed a total of one earned run. In Game 4 of the NLDS in 2015, he bought the Dodgers to a Game 5 virtually by himself on three days’ rest. Who can forget the amazing save in Game 5 of last year’s NLDS that should’ve destroyed this narrative once and for all, or the brilliance in Game 2 of the NLCS that came right behind it? You’d also have to ignore that Kershaw has real “excuses” for much of his under-performance, having been asked time and time again to push himself beyond exhaustion and injury because he’s Clayton Freakin’ Kershaw and the Dodgers have rarely had better options.

But the popular song remains the same: Kershaw just can’t handle the bright lights. This game brought a start that any other pitcher would’ve been venerated for in the age of “bullpenning”—two runs over five innings on just 87 pitches, turning a tie game over to the deep Dodgers bullpen. Yet in four or five days when Kershaw takes the ball again, nobody will remember that he pitched pretty well, and we’ll have the same conversations about whether the mediocre pitcher, Playoff Kershaw, is going to show up again. I have no dog in this series, but I must admit that a part of me wants to see Kershaw go on one of his insane tears just so we can finally appreciate Clayton Kershaw without that pesky “but the postseason.”

Charlie Culberson is about as far from Kershaw on the MLB player spectrum as you can get while still sometimes collecting per diem. Culberson started two games in the majors this season, both in September. He went 2-for-13 on the year, after hitting just .255/.299/.336 at Triple-A Oklahoma City. He was mostly a second base prospect back in the days when he was a prospect, making no appearances at shortstop from 2009-2012, only adding the position back to his repertoire for part-time utility duty once it became clear that he wasn’t going to hit enough to be a regular major leaguer.

Indeed, Triple-A in 2017 was the first season in which Culberson had regularly played shortstop anywhere above A-ball. The Dodgers have plenty of guys who can play a cromulent fill-in shortstop floating around their roster already; Enrique Hernandez and Chris Taylor both started 10 or more times there this season. Yet when Corey Seager was unexpectedly omitted from the NLCS roster due to injury, the Dodgers not only summoned their 28-year-old Triple-A shortstop from the taxi squad, they stuck him in Seager’s starting spot, with Hernandez and Taylor in the outfield. On the first day, it couldn’t have gone better. Culberson played a flawless shortstop, knocked in the tying run on a sacrifice fly, and doubled and scored on a controversial replay review later on.

The Dodgers bridged Game 1 from Kershaw to closer Kenley Jansen using as relievers three formerly successful starters with durability issues: Tony Cingrani, Kenta Maeda, and Brandon Morrow. Cingrani and Morrow both had very promising stretches as young MLB starters, and Maeda was one of the best starters in Japan for years. After being bumped out of the postseason rotation by the midseason acquisition of Yu Darvish, Maeda has adapted to bullpen work about as well as any displaced starter could. Airing it out for an inning or two at a time, he’s found a couple extra ticks on the fastball and slider, and tightened up his command.

It remains to be seen if he’ll be in the bullpen long term, but Maeda is quite a nice weapon for this postseason. Cingrani has been of only limited effectiveness and health over the past few years, but thrived after a change of scenery and a more limited short-relief role following a deadline move to Los Angeles. Morrow finally converted to full-time relief work in 2016 after a decade juggling roles with only intermittent health. He failed to make the Dodgers as a non-roster invite this spring, but worked his way up from early Triple-A struggles to being dominating setup man firing it in at 99 mph as the season went along. If this all looks like it’s a happy accident, it’s not; if you’re a pitcher who has had MLB success and still has your arm attached, the Dodgers will take a peek and see what you’ve got left as a reliever.

Taylor looked awfully close to being placed in the semi-busted Mariners shortstop prospect box, the one that so often comes with a shipping label to the Tampa Bay Rays. Instead of reaching purgatory with Brad Miller, Taylor was dealt to the Dodgers last summer for Zach Lee, another player just barely hanging onto prospect relevance. Lee fell off the prospect tree entirely in 2017, while Taylor finally found his niche as a super-utility regular. Taylor started games at five different positions and got 568 plate appearances for Los Angeles without starting anywhere as many as 50 times.

And thanks to an overhauled swing, he put up an .850 OPS and a 5.7 WARP out of nowhere—basically the type of season that would fit right into Ben Zobrist’s prime. With Joc Pederson struggling, Taylor has been installed as the regular center fielder for the playoffs and he launched the go-ahead homer off Hector Rondon in the sixth inning. The magic will wear off eventually, whether next year or 10 years from now, because time makes fools of us all. But it hasn’t worn off Taylor yet.

Last but certainly not least, Yasiel Puig simply doesn’t fit into any box. The hero of Game 1 is a true one-of-a-kind, the most exuberant man in a sport filled with exuberant men. The 2013 rookie sensation became 2015 and 2016’s epic disappointment amid rumors of clubhouse discontent and poor work ethic. When Puig is going well, as he is now, his flamboyance is considered part of the package by all but the stodgiest and most uptight. When things go south, though, he becomes a distraction, a problem, an annoyance to get rid of. The Dodgers themselves have occasionally gotten caught up in this cycle, sending Puig to the minors for a stint in August 2016 and nearly trading him for Ryan Braun, who for his own set of vastly different reasons has become similarly perpetually embattled.

But the Dodgers braintrust held onto their man, and Puig righted the ship in 2017, reestablishing himself as the right fielder of the now and the medium-future. He’s also turned the celebrations up a notch further while doing so, an impossible task that only Puig could pull off. Puig called his shot on a double to left-center in the fifth inning, then did a ridiculous KBO-level bat flip even though the ball was clearly in play. After reaching second base, he did a series of DX-style crotch chops amidst a burst of wild gesticulations. Following a home run later in the game that he stared down like he was a participant in a heavyweight title fight, Puig created his own curtain call.

He looks like he’s having more fun this postseason than anyone ever has playing the game, and that’s something we could all use a little bit more of these days. Some of us, more than others:

Hey @KeithOlbermann I flip on singles and doubles & not on homers. Come watch the show. Need a ticket? I got you #PuigYourFriendToo 🙃 https://t.co/7Ror8AyGRg