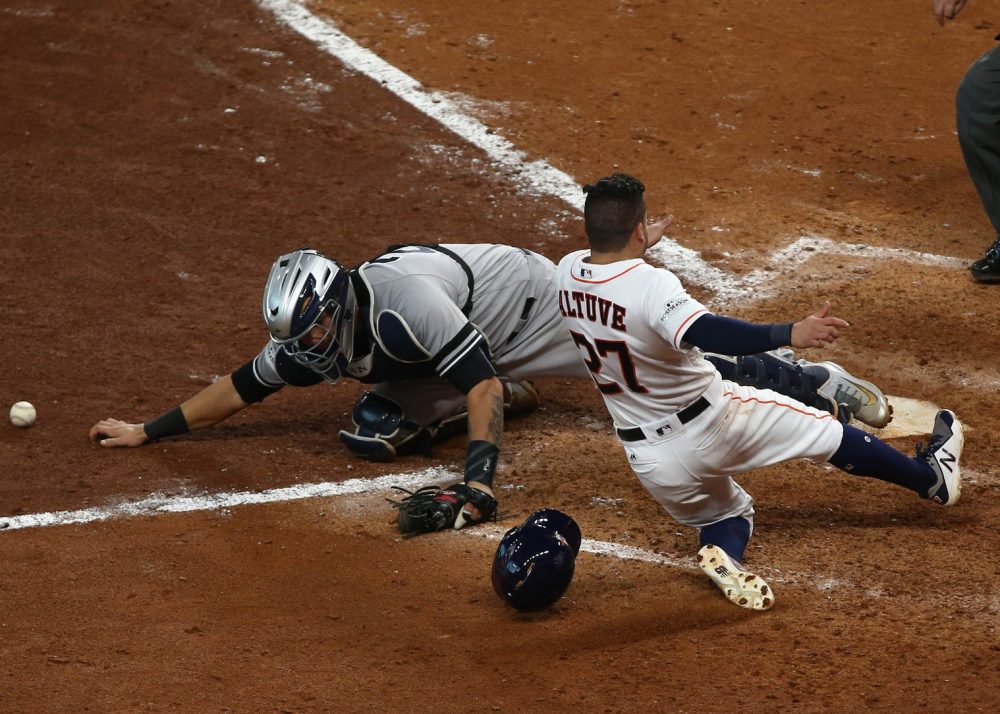 Game 2 showed everyone exactly why the Astros traded for Justin Verlander at the deadline. He pitched a complete game, allowing just one run on five hits and one walk, striking out 13 and throwing 93 of 124 pitches for strikes. Eleven of his strikeouts were swinging and eight of them were on his slider.

Brett Gardner had a particularly tough night against Verlander, striking out three times, all swinging and all on different pitches. In the first inning, Verlander used his slider, in the sixth it was his changeup, and in the eighth he got Gardner with his four-seam fastball. Other multiple-strikeout victims were Aaron Judge, Starlin Castro and Gary Sanchez, the latter of whom was called out on strikes in the second inning and struck out swinging in the seventh on Verlander’s slider.

In the bottom of the fourth inning, the Astros got on the board thanks to a Carlos Correa line drive just over the fence in right field. It was reviewed because a young fan nearly had a Jeffrey Maier moment, but the call was upheld and the Astros went up 1-0.

Verlander was on all night and there was nothing the Yankees could really do about it. They were able to hit three doubles off him—from Gardner, Aaron Hicks, and Todd Frazier—but were only able to generate one run. Gardner was thrown out trying to stretch his double into a triple in the third inning and Frazier’s double in the fourth inning was a ground-rule double because it got stuck in the left field fence. Hicks did score on it, though, and tied the game.

Verlander seemed to get stronger as the game went on. In the top of the eighth inning, he set down Frazier, Chase Headley, and Gardner in order.

It would remain tied until the bottom of the ninth inning, when Jose Altuve singled with one out and Correa lined a double into the right-center field gap. Altuve turned on the jets and just kept running, scoring all the way from first base when Sanchez dropped the relay throw home.

Correa jumped in the air at second base after the play unfolded at home and the Astros celebrated a walk-off win at Minute Maid Park, taking a 2-0 lead in the best-of-seven series.

The most memorable moment of the game was Altuve’s mad dash, but the story of the game was Verlander, who turned in a vintage, nine-inning gem in a postseason filled with short starts and heavy bullpen usage. He was masterful.

It looked like the former MVP’s career might be winding down after an un-Verlander-like 4.54 ERA in 2014 followed by an injury-riddled 2015, but he returned to form in 2016 with a 3.04 ERA in 228 innings. This season, he had a rough first half with the Tigers, posting a 4.73 ERA, but Verlander’s secondary numbers painted a much prettier picture and his post-trade numbers with Houston included a 5-0 record and 1.06 ERA.

And now he already has a signature postseason performance for the Astros, who bet big on Verlander.