T.A. Waters, in his 1988 The Encyclopedia of Magic and Magicians, writes: “Misdirection is the cornerstone of nearly all successful magic; without it, even the most skilled Sleight of Hand or mechanical device is unlikely to create an illusion of real magic.”

Skilled magicians use misdirection to trick our minds into accepting the wrong image or action, leading us to draw false conclusions. To killjoys, this trickery is something to be solved. To the rest of us, the misdirection makes magic enjoyable. The point being: The Washington Nationals are magicians.

For those of you who saw the news that Tuesday’s game had been called due to rain and foolishly decided to turn your attention to work or family or sleep or something like that, let me get you up to speed on the ensuing 20 hours or so. The postponement was viewed as a break for the Nationals, who would be able to start Stephen Strasburg on normal rest instead of Tuesday’s scheduled starter, Tanner Roark.

Dusty said Strasburg did throw a bullpen today in anticipation of starting Thursday. So by time game was called, couldn't pitch tomorrow.

Which drew the kind of responses you’d expect:

Executive branch: "We make the worst decisions of any DC institution."

But it got better.

Have now heard from people (besides official team word) that Strasburg threw the bullpen yesterday. There was definitely some confusion.

Either way, word is Strasburg is very sick and has been for a couple days.

So the Nationals pulled a massive misdirection. They told us Strasburg wouldn’t start. Because he’d pitched that day. But he hadn’t! Well, then it was because he was sick. Baker noted that “this is the time of the year for mold in Chicago,” which is actually true: 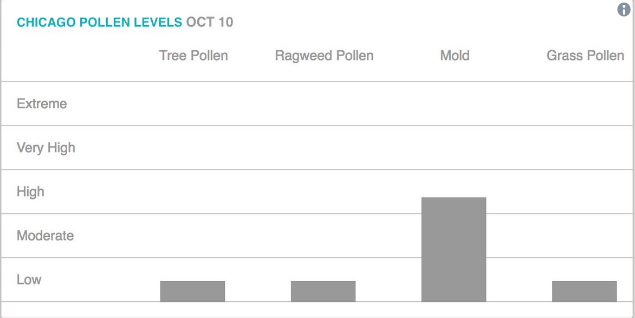 So, former players, what do you think of Strasburg?

And the Nats continued to misdirect. General manager Mike Rizzo told the press that Strasburg was dealing with “fever, chills, and acute sinusitis” but had switched to a different antibiotic and took intravenous fluids, woke up Wednesday morning feeling better, and advised pitching coach Mike Maddux that he was good to go.

Word from Nats side is there's a possibility. Word from person close to Strasburg is that they now expect him to start.

But that wasn’t all. Not only did the Nationals make a healthy Strasburg appear, they changed him. We, and the Cubs, had our eyes trained on the Strasburg who all season threw 52 percent fastballs, 23 percent curveballs, and 19 percent changeups. Instead, they got the Strasburg who threw his devastating changeup—one of the best in the game—30 percent of the time. He threw the 32 changeups to the Cubs in Game 4, all but nine for strikes, all swinging, and they whiffed on 47 percent of their swings. He got one of his 12 strikeouts on a fastball, three on his curve, and every one of the last eight on his changeup. Here are his last three, the three batters he faced in the seventh inning:

Along the way, Strasburg did another misdirection. One of the key themes of this postseason, as Matthew Trueblood wrote on Tuesday, is the increased awareness of the times-through-the-order penalty. Postseason pitchers are being pulled before they can face the order a third, or in some cases a second, time. So while the Nationals' magicians had us looking at the parade of Cubs facing Strasburg a second or third time, Strasburg spit at our puny TTtO penalty:

And the focus on Strasburg and his supposed illness? Another misdirection, because it took our concentration away from the Cubs' starter, Jake Arrieta, whose balky hamstring had limited him to 10 1/3 innings since the end of August. He allowed only an unearned run and two hits over four innings of work, but he wasn’t sharp. He threw 90 pitches, only 53 of them for strikes, as he walked five and struck out two.

But the magicians from Washington were saving their best trick, their most masterful misdirection, for later in the game. In the top of the eighth inning, they were still leading just 1-0. Strasburg had thrown his 106th and final pitch. Jon Lester had come on in relief for Arrietta, and was masterful, retiring the first 10 batters he faced. He walked Ryan Zimmerman, but then this happened:

A JON LESTER PICKOFF! Everyone stopped what they were doing, riveted at the sight of the guy who won’t throw to first base picking off a runner in a key postseason situation. Two outs, nobody on, and a JON LESTER PICKOFF! Momentum seemed to be shifting, as we all looked at replays of the unlikeliest of events.

And as our attention was diverted, staring at the pickoff, the Nationals went to work. Daniel Murphy walked. Carl Edwards was brought in, and he walked Anthony Rendon and Matt Wieters to load the bases. After a ball to no. 9 hitter Michael Taylor, Wade Davis replaced Edwards.

Taylor’s presence in the lineup was the result of yet another Nationals misdirection. He’d hit .229/.282/.358 as the Nationals’ center fielder in 2015, a .240 TAv, and when he followed that with a .243 TAv in 2016, highly-touted shortstop prospect Trea Turner was called up to displace him in center field. In December, Washington traded prospects Dane Dunning, Lucas Giolito, and Reynaldo Lopez to the White Sox for Adam Eaton, sending Taylor to the bench. The misdirection was so effective that after Eaton tore his ACL in April, we didn’t notice when Taylor returned to center field. And we certainly didn’t notice when Taylor hit .271/.320/.486 with 19 home runs and 4.0 WARP, fourth on the team, trailing only Rendon, Murphy, and Bryce Harper.

So what a masterful misdirection it was, when the player who wasn’t supposed to be able to hit, and wasn’t even supposed to be the starting center fielder, came to the plate against a reliever who last gave up a grand slam in July 2013, when our attention was still drawn to Lester’s pickoff.

The Nationals have never won a postseason series. They’ll have a chance to see if their magic can break the spell tonight in Washington.

You need to be logged in to comment. Login or Subscribe
medler312
I sat in my perch in section 511 with my typical row 5 gang marveling at 3 amazing items:

1. It was the most miserable day/night I've ever spent at a ballpark. My seats are under the upper deck terrace, but it was the most disgusting looking baseball game I've ever been to. (regardless of the outcome)

3. There will never be enough bathrooms at Wrigley Field.
Reply to medler312
mainsr
Yeah, the weather looked completely miserable. But today you're warm and you're dry and you can say you were there.
Reply to mainsr
bobbygrace
Those who love Stephen Strasburg's changeup should check out a series that Harry Pavlidis did here in 2013, "What Makes a Good Changeup?" Strasburg had the best changeup in the game at that time, according to Pavlidis' research. I'd be shocked if that has changed.

Here's the link to part three of the Pavlidis. The first paragraph contains links to the other two parts.