Deuteronomy has all sorts of things to say about debt and usury, but somehow leaves out Wild Card games.

When you’re managing the Wild Card game, all you care about is advancing. Elimination games carry crazy leverage, the highest leverage, and you can’t fret over pulling a guy who isn’t pitching well. The Division Series, the next start, the round after that, that’s all Future You’s problem. Present You has to win. So Present You borrows. You borrow 34 pitches from Robbie Ray, even though he’s supposed to start Game 1 against the Dodgers, and you borrow 25 pitches from Archie Bradley. What choice do you have?

Except, you’re about to find yourself in a spot of trouble because you’ve borrowed something you can’t pay back. You can’t un-throw those pitches any more than you can un-eat your breakfast. And you aren’t borrowing from the loan officer at your local bank, all suspenders and glasses and FDIC regulations. People talk about Time as a thief, but he’s not; he’s a loan shark. He doesn’t care about Deuteronomy, or the kids rooting for you in the stands, or anything really, except being paid back.

On Saturday, Time came to collect, and the Diamondbacks, lacking pitches to give him, suffered the fate that befalls all those who disappoint loan sharks—they took one pow! right in the kisser.

Goldschmidt and Drury Negotiate with Time While Tied to a Chair

In mobster movies, there’s always a moment when the guy who owes the lead mobster money tries to talk his way out of having his kneecaps whacked with a pipe. He is usually tied to a chair while he does this. Please, I have kids! I’ll get you the money tomorrow! I’ve got the horse right here! Those movies also always have a moment when the mobster pauses mid-swing, and the guy in the chair takes a breath, believing he’s been granted a reprieve.

In the first inning, Paul Goldschmidt took Rich Hill deep to give Arizona a 2-0 lead.

And later, in the seventh inning, with the Diamondbacks trailing 7-2 and negotiations with Time breaking down, Brandon Drury, pinch-hitting for Jorge De La Rosa against Brandon Morrow, parked a three-run shot into the left field seats, to seemingly give his team an extension on their loan.

It was a noble effort to make it a game. You could almost see them pulling off a comeback. Almost. You always feel a little bad for the guy in the chair. You know the mobster is going to follow through on his swing. The mobster doesn’t care about that horse you’ve got. This is business and your payment is due.

Chair guy is in trouble. But he thinks, for a second, that he isn’t. For a second there, mid-swing, he can breathe.

Robbie Ray was exhausted. Robbie Ray threw 34 pitches on Wednesday. They were high-stress pitches, against the likes of DJ LeMahieu, and Nolan Arenado, in a game he was supposed to watch from the dugout. He had to have been exhausted. And you could tell. Robbie Ray was all over the place on Saturday. 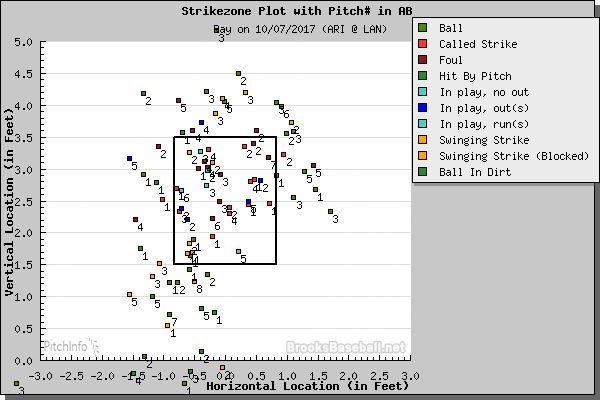 Look at how many of the pitches on that plot are almost off the graph entirely. In the second inning, after walking two, a Ray wild pitch allowed Enrique Hernandez to move to third base; he scored on a Yasiel Puig ground out.

In the fourth inning, a wild pitch got away from Chris Iannetta, allowing Logan Forsythe to score.

The Dodgers would tack on another run on a Chris Taylor infield single. Ray had three wild pitches. He hit Justin Turner. He walked four. The only other pitcher in postseason history with three wild pitches and a hit batsmen was Juan Guzman in Game 1 of the 1993 ALCS. His team won anyway. Baseball is rude like that.

It wasn’t the start Ray wanted. He wanted to control his pitches. He wanted to command the zone. He wanted to get the Diamondbacks back in it. But he didn’t have the pitches to do it. He’d already spent 34 of them on Wednesday, and he couldn’t borrow anymore.

The best thing you can say about Jimmie Sherfy’s performance is that he threw strikes. I guess that’s the best thing you can say. He threw 10 pitches, and eight of them were strikes. They weren’t good strikes, but hey, strike throwing is a thing. But Jimmie’s problem was that Torey Lovullo’s borrowing wasn’t limited to the Wild Card game. He’d done a bit of borrowing Friday, too, after Taijuan Walker only threw one inning, after being pressed into a Game 1 start because Robbie Ray had thrown 34 pitches in the Wild Card game, because Zack Greinke gave up four runs in 4 2/3 innings.

This is why your parents tell you to pay off your credit card bills in full every month. Sherfy threw 10 pitches on Saturday, but Lovullo had borrowed 17 the day before. Which meant his 10 pitches Saturday went like this.

The interest can just kill you.

Time Decides He’s Had Enough of This Nonsense, Messes with Bradley

Archie Bradley almost got out of it. We’ll address that in a moment.

First, I’d like to pause and briefly note that the phrase “Make Some Noise” is flawed. “Some” noise implies that there is other noise you could be making that you are leaving on the figurative noise table. If making noise is useful, either because it distracts your opponent or because it makes you happy, you should make a bunch of noise; a murder of noise; a ton of noise. You should make all the noise. “Some” is so polite. It’s weak. You’re not there to be polite or weak. You’re there to be useful. You’re there to make noise. So go make a bunch of noise. Make all of it! You never know if you’ll have a chance again. 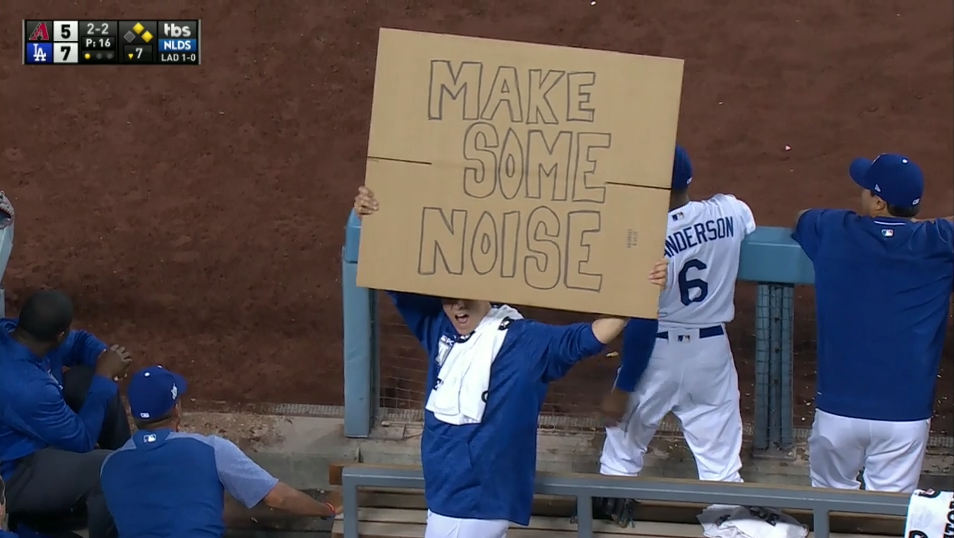 Anyhow, after making some but not all of the noise, the crowd looked on as Bradley, having walked Andre Ethier, faced Taylor with the bases loaded. Bradley threw a fastball; Taylor hit what looked like a sure double-play ball. But then …

Bradley almost got out of it, but Time was done waiting. The loan had come due. The Diamondbacks would not rally. When a loan shark realizes you can’t make good, he settles for other forms of currency.

Of course, Time wasn’t the only one with a hand in the Diamondbacks' loss. Sure, Rich Hill wasn’t especially impressive, but Kenta Maeda pitched well in relief. Kenley Jansen had a five-out save. Logan Forsythe was 3-for-5 and stole a base. Austin Barnes had a two-run double. Yasiel Puig was 3-for-4, or:

The Dodgers took advantage of Ray’s fatigue, and Sherfy’s 10 pitches, and Ketel Marte’s error. Jansen didn’t make Morrow’s mistake. They all did their jobs. But they were playing mostly just this game. The Diamondbacks were playing this game, and Friday’s, and Wednesday’s, too. As the Wild Card team, they were always going to have a harder time, and the Dodgers were always going to be a tough draw, but Arizona probably didn’t anticipate having to borrow quite so much in the beginning, or at such high rates.

Of course, they could always get one back Monday. Greinke might not need so much help. Yu Darvish could fall apart. Baseball makes borrowers out everyone eventually, and Time, as we learned, always gets paid back, one way or another.