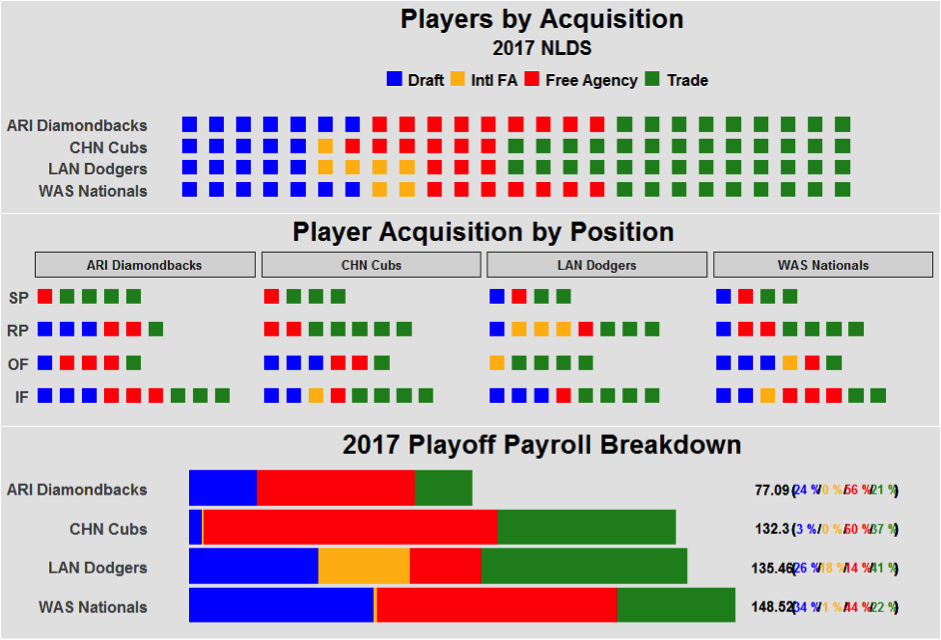 Once again, we find that acquiring players through trades is a heavily favored strategy. Of 100 players in the NLDS, 44 are on their new team because of trades. Granted, this takes into consideration players acquired through Waivers, the Rule 5 Draft and players traded while still in the minors.

Also notable is that Los Angeles and Washington are equally built on drafts and IFA, with Los Angeles investing more notably in IFAs thanks to Yasiel Puig, Kenta Maeda, Kenley Jansen, and Pedro Baez.

Next thing that you’ll might notice is that Arizona is carrying a five-man rotation—though aside from Taijuan Walker, Zack Greinke, and Robbie Ray, it’s more than likely that their other two starters will be in the bullpen. Los Angeles, on the other hand, have a stacked bullpen with eight players.

Finally, three of the four teams have payrolls above $130 million. Arizona is the only team with a payroll below $100 million. This becomes more relevant in the next infograph. What is noticeable is that Dodgers’ have most of their payroll committed to players they’ve acquired via trade; while both the Diamondbacks and Cubs have gone the Free Agent route with more than 55 percent of their payroll going to signing free agents. 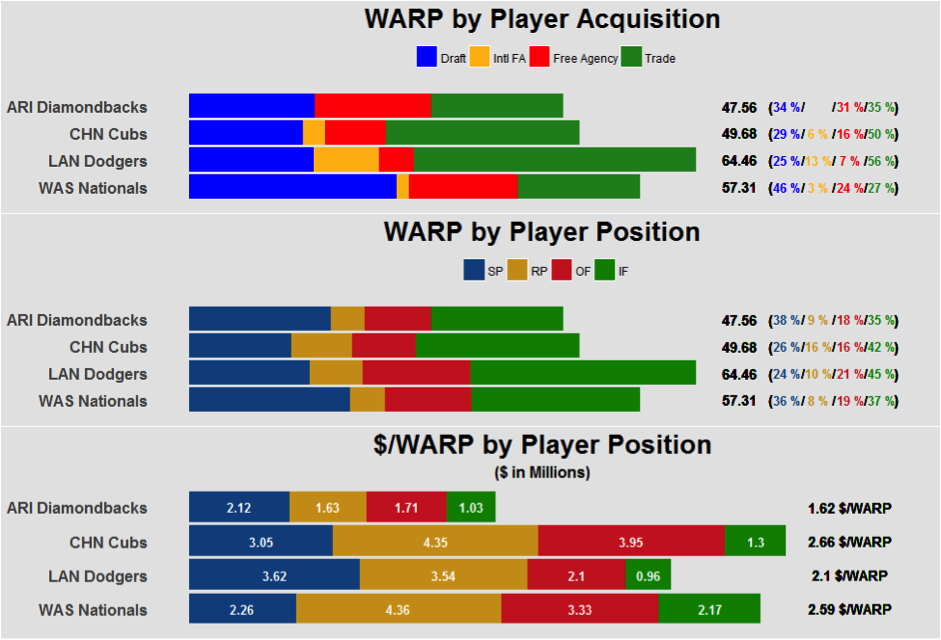 Given their Dodgers’ willingness to take on the salaries of traded players, it’s no surprise that this bunch has contributed 56 percent of the Dodgers’ 64.5 WARP. The next highest production belongs to the Nationals drafted players—having Bryce Harper and Stephen Strasburg in your lineup helps!

If we flip over and check WARP by Position, we notice that the Los Angeles-Arizona series are evenly matched in pWARP—the Diamondbacks’ rotation beats out the Dodgers’ but the bullpen balances things out. On the Washington-Chicago side, the story is more lopsided.

The real advantage comes in the form of batting. When all’s said and done, having the likes of Justin Turner, Cody Bellinger, Corey Seager, and—breakout sensation—Chris Taylor gives the Dodgers a heavy-hitting lineup.

Nevertheless, the Dodgers have struggled to get as much bang for their buck, paying almost $2.1 million per WARP. The Cubs and Nationals are nearly neck and neck but no team has been more effective at winning based on their payroll than the Dbacks. They have had the most effective rotation, bullpen, and outfield—and would have had the lead in the infield if not for a very slim lead held by the Dodgers. 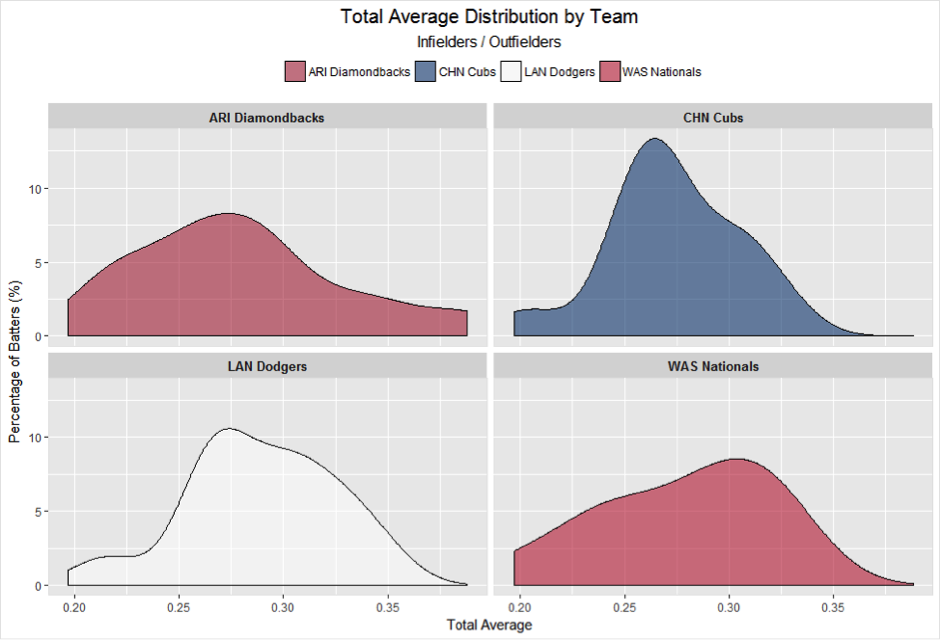 Before we wrap things up, let’s look at how the hitters’ TAv lines up. Arizona and Los Angeles have an almost even distribution, but the advantage would go to the Dodgers whose hitters have featured higher TAv’s throughout the season. Arizona, on the other hand, have been skewed more to the left, and aside from Paul Goldschmidt and J.D. Martinez— and Archie Bradley—haven’t featured the elite-level hitting that the Dodgers have. This will be a great series that will feature great baseball on both sides.

With the Cubs and Nationals, we have the same problem that we saw in the Twins-Yankees matchup. Yes, Chicago’s lineup is more evenly distributed but given that most of their players have hit around a .250 TAv, they rely more on hit sequencing than the Nationals. Speaking of Washington, how weird is that curve? It just increases until above the .300 TAv mark and then falls off a cliff. This is a testament that the Nationals—like the Yankees—are built to hit but they will also miss often.