Freedom in the Bay

It’s a terrible thing, really, to face your own freedom. Kierkegaard thought it dread: the dizziness that comes from standing upon the precipice of a giant chasm, you, there, small, tiny and pathetic, staring into the gap that is all that Could Be. Later, Sartre turned it into a coffee-table book, and then we just kind of started calling everything that took anything remotely seriously “existential.” That sad movie you watched last weekend. Radiohead. Turning into your parents.

It’s a kind of horror that lends itself well to art, but one that doesn’t quite speak to the experience of watching baseball, which if you ask me, is also art in a certain way. But where Sisyphus and Antonius Block shudder under the weight of Possibility, the athlete thrives in it: It is precisely possibility that promises a paycheck tomorrow, and the next day, and then the next, until your body stops outputting what you try to put into it.

Pablo Sandoval hit a walkoff home run for the Giants to end their season. In classic Sandoval fashion, it cost the team the # 1 overall pick

It would be, I suppose, banal to observe the irony of the situation. Sandoval’s departure from the Bay Area, his struggles in Beantown, or even the simple fact he would not be wearing a major-league uniform were the Giants to have any other win-loss record are not necessarily givens, but they are, in their own way, kind of funny.

Instead I think we have to problematize our dear friend friend Kierky, to realize the real horror of existence comes not from facing the eternal freedom that possibility holds for us all, but from the understanding that we are all, each of us, born not into a physics experiment but a math equation. For Sandoval to finish his season wearing Giants orange, a small part of the universe demanded a sacrifice, a closed door which reminds you that you asked for one small thing and it would cost another.

The stakes of this are staggering. Perhaps, in a strange way, we are all unfree. But it’s only the universe responding to that deep, embodied horror we outlined as a species so many decades ago: Be careful what you wish for. Freedom might be terrifying, but it may not be able to eclipse the sun that is fate. That may not sound incredibly existential, but sometimes you have to wonder what really keeps you up at night. 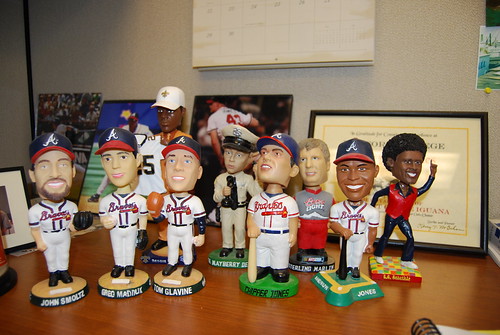 The National Bobblehead Hall of Fame and Museum does not, as of right now, physically exist. (It would like to one day, and so has a website and blueprints and founding memberships that bobblehead lovers—like, say, you—can buy to make the dream the reality.) The closest thing we have instead is Jeffrey Loria’s collection of bobbleheads, which has been displayed for the past five years as its own little museum exhibit at Marlins Park and will very soon no longer be displayed there. This has largely been painted as one last petty jab by Loria as he hands over the team’s keys to Derek Jeter and friends, and pretty understandably so; it is hard to see anything but pettiness in “thank you for paying $1.2 billion for this franchise, sorry, bobbleheads not included.” Especially when one is taking the bobbleheads but leaving a legacy largely built on being cheap and capricious.

But why the bobbleheads are being removed from Marlins Park is not really such an interesting question. Not nearly so interesting, at least, as why the bobbleheads were there in the first place, and what they were allowed to be. Bobbleheads are neither very serious nor are they the closest thing to it, which is very old. (It’s been less than 20 years since the Giants held baseball’s first bobblehead giveaway, a Willie Mays promotion in May 1999.) For many people—most, even—these two factors disqualify bobbleheads from being worthy of their own museum. That leaves not such a large population of people who believe that bobbleheads deserve a museum, an even smaller population of people who have the time and the means and the self-confidence to go on and build a bobblehead museum, and a smaller population still of people who could manage to pull off a bobblehead museum that celebrates bobbleheads for what they are without getting too self-serious about it. So far, weirdly, that smallest population has proven itself to be Jeffrey Loria and no one else.

Loria handpicked the bobbleheads that were displayed in his museum—though he hadn’t built the collection up himself, he’d bought most of it in one fell swoop from an Astros clubhouse guy named Steve Perry—and worked closely with stadium architects to custom-design the display case. The heads constantly bobbled, though not too fast. (An early attempt had so much bobbling that the figurines themselves were bumping into one another.) “They're fabulous little objects," Loria told the Palm Beach Post in 2012. "They're sculptures. To me, they are works of art."

They are, in their own weird small way. And now they’ll be at the Hall of Fame, which is probably a better home for them in the long run—a place where they’re displayed for all of baseball, rather than kept as one man’s personal project in one park. Petty, maybe, but for the greater good.