Today we bring you the Wild Card teams, using projected playoff rosters, that we will do our best to update once the official rosters are announced. We will be providing all of the information below for each individual round of the playoffs, and we hope you enjoy them! 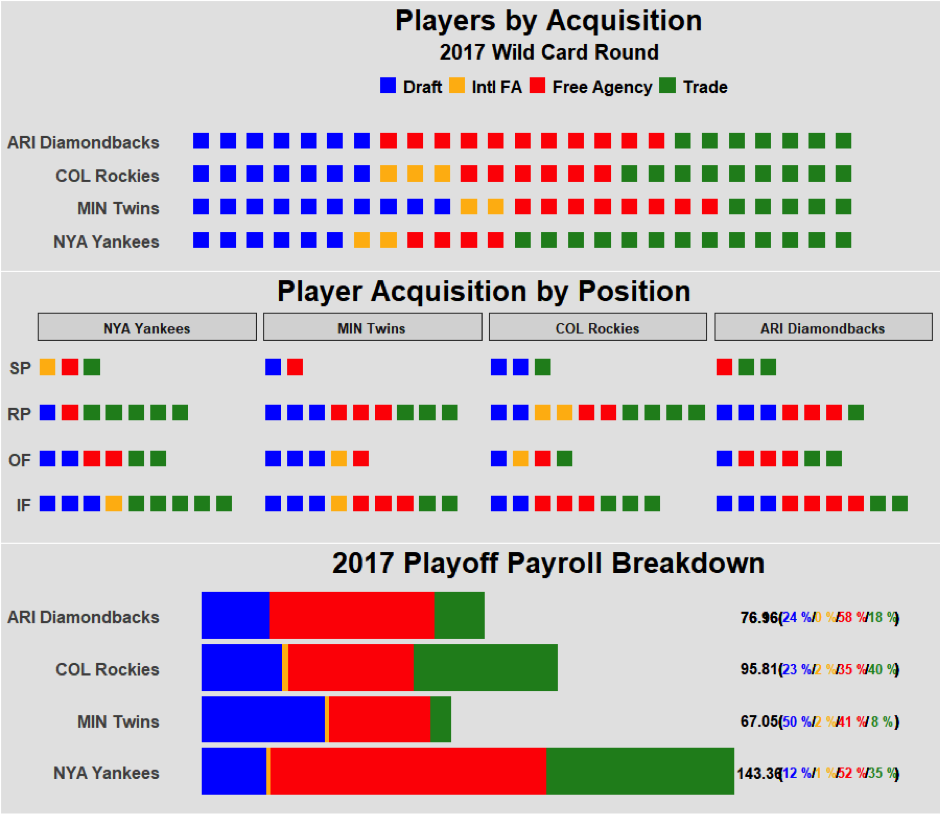 While the Baby Bombers get a lot of attention in New York (and deservedly so), the majority of New York's roster arrived via free agency and trades (emphasis on trades), with relatively few being developed internally. While production tells a different story, the Yankees are assembled mostly how you’d expect given their financial muscle. Their Wild Card counterparts are precisely the opposite, though, with the majority of the Twins' roster arriving via the draft.

That the Diamondbacks have the highest percentage of their roster coming from free agency (within the Wild Card round) was a bit of a surprise, but it is worth noting that the core of the talent on the team came from the draft and via trade, with mostly bench players and middle relievers (excepting Zack Greinke and Fernando Rodney) as free agent signings. The Rockies' lack of homegrown players might surprise some, but keep in mind that several of their homegrown starters might not crack the Wild Card roster, which shifts the percentages a bit.

The most amazing thing, however, is that these teams have barely invested in international free agents—the Diamondbacks haven’t spent a single dollar on the international market!*

*David Peralta was originally an international free agent, but because Arizona signed him out of an independent league, he was classified as a standard free agent for the purposes of these graphics. 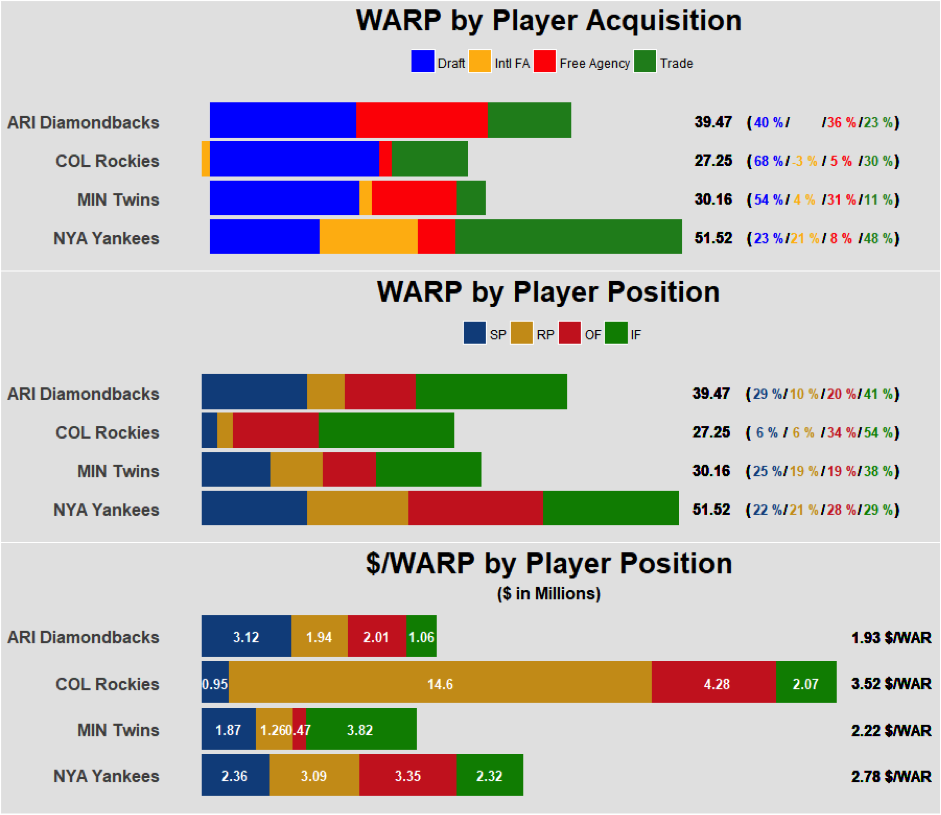 If you’re wondering why the yellow block is out of place for the Rockies, their IFA players actually registered a negative WARP for them this year. While that looks bad, it’s balanced a bit by the Rockies' ability to generate the most WARP out of their draft class of any team in the Wild Card round.

We can also see that the Yankees have gotten great value out of their IFAs—Luis Severino and Gary Sanchez representing your two IFA investments will make a guy look good, especially on close-to-league-minimum salaries.

Infielders (which included catchers) unsurprisingly generated more WARP than any other positional bucket—it helps to have more players in your bucket—but it’s worth noting that the Diamondbacks received by far the highest contribution from their starting pitchers, due almost entirely to Greinke.

The other big takeaway just based on the graphic is the huge yellow bar for Rockies relievers. They generated a weak 1.65 WARP as a group, despite a ~$24 million price tag, resulting in $14.59 million per win by the bullpen. While Greg Holland, Pat Neshek, and Chris Rusin led these relievers, the rest of the bullpen nearly negated their positive contributions. The Rockies' outfield was also an issue despite Charlie Blackmon’s otherworldly play, because Carlos Gonzalez generated fewer than one WARP this year despite his hefty paycheck. Good thing for them he’s turned it on at the end of the season.

Now there’s a big caveat here: most teams are only carrying a few starters because of the one-game nature of the rosters. Those figures will change once they adjust their roster for a full series, and we will provide updated graphics on those rosters once they’re posted. Still, it’s not worth drawing too big a revelation out of these weirder, one-game rosters. 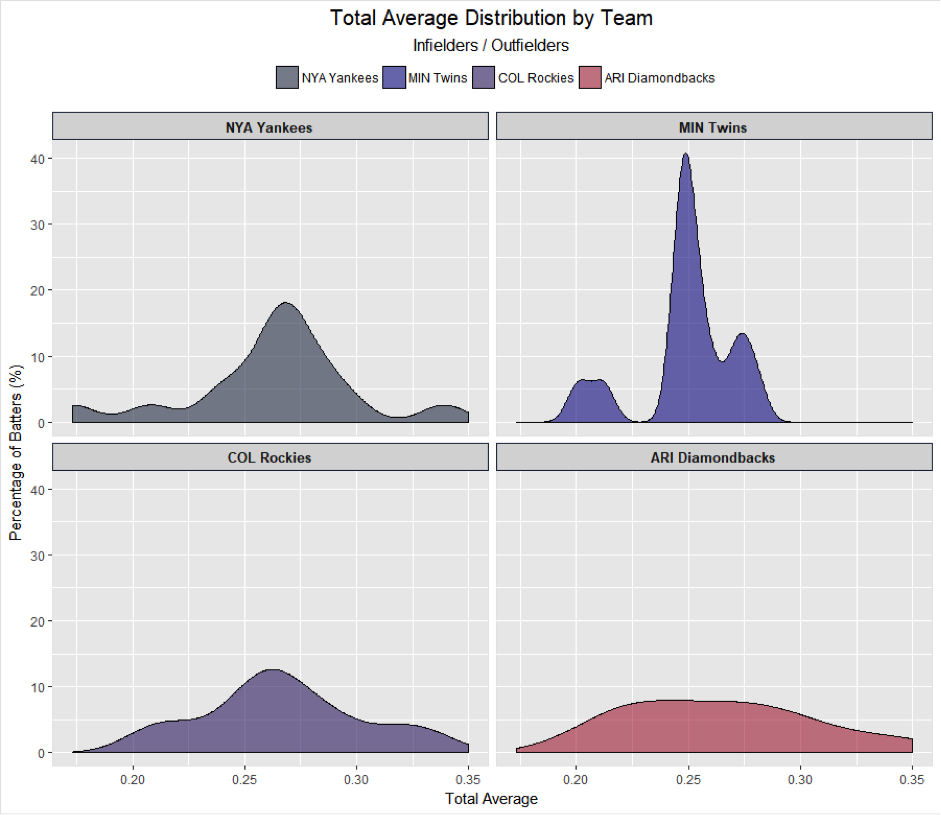 Finally, let’s take a look at how each team’s TAv was distributed throughout their hitters, with the vertical axis representing the percentage of players on the roster that have the TAv shown on the horizontal axis. The first thing we can see is that Arizona’s distribution is pretty flat, meaning they have hitters throughout their lineup and bench that run the gamut from elite-level TAv (hello Paul Goldschmidt and J.D. Martinez) to … well, Jeff Mathis.

The Twins’ distribution is nearly the opposite, though. They have a huge glut of players right around the .250 TAv mark, with another plateau nearish the .275 marker. This consistency could be an advantage if they’re able to string hits together, but the Yankees' smaller grouping of higher TAv hitters look to be a more potent offense overall.

You need to be logged in to comment. Login or Subscribe
jfranco77
I love this. Look at the small market Yankees with the least players signed via free agency! (not the cheapest, of course, but the least)
Reply to jfranco77