The funniest moment of the season goes to Addison Reed. pic.twitter.com/ZwpT69sL5t

The above situation, for Addison Reed, is surely embarrassing. But just how embarrassing is it? Let’s check the Official Chart of Embarrassment™ to find out: 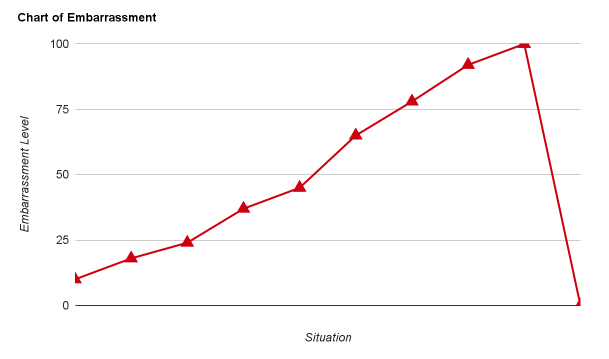 So, yes, Addison, if for some reason you’re reading this, you were the star of a pretty embarrassing situation, but it could be worse. You didn’t irreparably damage any friendships (unless you considered John Farrell a friend), and while you technically invited yourself to a party, there were at least 1,000 fans who wanted you there. The Red Sox clinched the AL East, Farrell received most of the blame for this mix-up, and by next season, hardly anybody will remember this happened, so brush it off, and just make sure you wait for the actual signal next time.

“It was hard enough to read of the firings in the paper, and those were bloodless executives!” Derek Jeter barked in his private suite, hidden inside the Marlins’ dinger structure. “I’m the good guy, dammit. America’s shortstop. I can’t be firing people, Bubastis!” he continued, directly addressing the carved wooden frog gifted to him by a street merchant in Bermuda who had engraved “JEETS!” into its forehead. “But we need to build you a habitat, Bubastis. With brothers! And sisters! Cousins and colleagues! … For that… we must trim payroll. But I cannot see their faces, and I’ve fired all the people who could deliver the news.”

***
Giancarlo Stanton is doing squats by his pool at his winter home. Countless squats. He would end his set, which was supposed to cap at 4,000, but he lost count, and has resigned himself to squat until he passes out. Squat. Squat. Squat. This happens more than he’d care to admit.

A growing dot at the edge of his plane of vision interrupts the squatting. A beautiful fleet of birds swarms, each with vibrant flecks of purple, gold, and magenta amid its gray feathers. Each bird has a message in its beak; these are dropped in succession.

“You’re traded to the Phillies.”

“Your agent was rude to me on the phone.”

“Google how they order cheesesteaks. They get very pissy if you do it wrong.”

***
“Just take me down, man,” Marcell Ozuna said sadly to the helicopter pilot.

“Marcell, your employer paid for a three-hour helicopter tour, and I’m a man of my word.”

“I’m pretty sure they don’t care,” Ozuna retorted, glancing at a large array of limestone spelling out “MARCELL, THIS IS DEREK JETER. I CANNOT AFFORD YOUR ARBITRATION ESTIMATE AND ALL THE OFFERS I GOT FROM OTHER TEAMS WERE FRANKLY UPSETTING SO I JUST RELEASED YOU. THAT WILL SHOW THEM.

“THANKS FOR YOUR TIME AND SUCH. END DICTATION.”

“Hello Derek Dietrich, I am Marlins franchise legend Edgar Renteria. I hit the game-winning single in the 1997 World Series. You, Derek Dietrich, have been designated for assignment. Together we both represent different planks in the great history of the Miami Marlins.”

***
Dan Straily rushes into his SUV. He’s late for dinner with his in-laws, but if he’s less than 10 minutes behind he could just blame it on traffic and say it was the spring breakers. It’s October, but his father-in-law hates spring breakers that much.

As Straily clicks his seatbelt, the unmistakable visage of Billy the Marlin comes into his rearview mirror. Billy is in the back.

Billy says nothing, but his head and his swordfish nose tilt slightly in Straily’s direction, as if his black eyes have settled their gaze on the back of his neck.

“What are you doing here, Billy?”

“Is this some sort of promo I forgot about?”

Billy stares, his eyes an ocean of ink and darkness; Straily can feel himself falling in.

The fish stares back. There is no rush, no schedule; from the beginning of time to the end, Billy has been sitting in Straily’s backseat, waiting.

When Henderson Alvarez threw the first pitch of the Phillies’ final game in September, everyone in the stadium who’d brought a blanket was already wrapped in it. A thoroughly autumnal wind dragged napkins across the warning track in left field and shoved the pennants and flags inward.

In the second inning, Maikel Franco heaved a ball just far enough to get out, its final hundred feet of travel a slow-motion tumble after a thunderous launch. If the players felt the bees in the bat-handles, it didn’t keep anyone from taking their hacks. The wind deadened the ball so much that, in the fifth inning, Mets left fielder Brandon Nimmo was nearly to third base by the time another deep fly fell on the warning track, the two runners ahead of him long since scored.

With the temperature in the 40’s and the hour gone late despite it being only the seventh inning, the Phillies tied the game on a sacrifice fly and a single. Earlier this summer, at the only other Phillies game I’d gotten to in-person, the game stretched on, too. But that one was at Fenway, a night as opposite this one as I could imagine: still 87 degrees at 10 p.m., the air syrupy. Due to the unfortunate realities of public transportation and the necessity of making the last train to Providence, I had to miss the ending, Dustin Pedroia’s game-winning single.

Here on the penultimate night of the season, there was no question: we stayed, though all across baseball, there was very little left to play for, and nothing at all in this game, save a way to stave off the winter that seemed to have arrived already.

At the end of Saturday’s game, scraping midnight, the Phillies lost. Asdrubal Cabrera completed his four-hit night with a three-run home run, and the Phillies went quietly in the bottom of the 11th.

But the lineup that took the field at 7:05 had spring in it—J. P. Crawford at short, Jorge Alfaro behind the plate, and Aaron Altherr–Odubel Herrera–Nick Williams across the outfield—an undeniable scent of future. Of course, there’s a long offseason waiting in the wings and the Phillies figure to be major players in it, so there’s no telling how much of Saturday’s lineup will also be March 28’s. Rhys Hoskins, who looks to stick at first base, tallied two long outs that would have been, on other days, rows deep. The last of them, in the bottom of the tenth, looked like this: 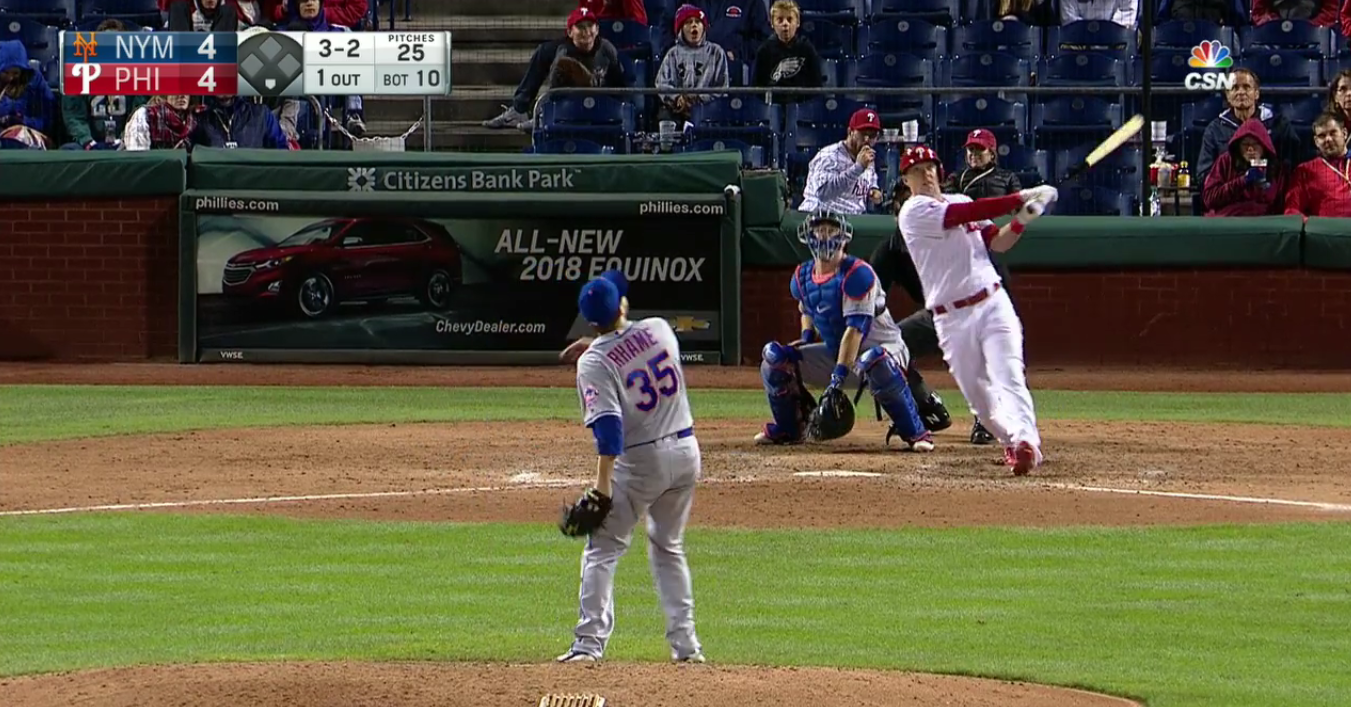 In late March and early April, a lot of games will look like they did on September 30: cold, inhospitable. But during some of these, surely the wind will be blowing out.