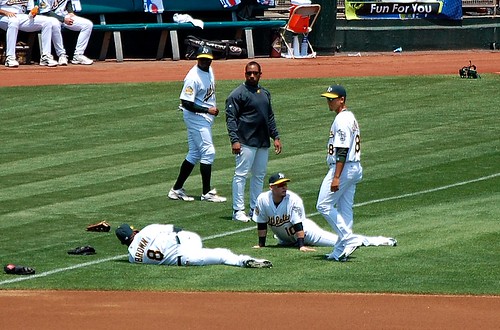 My father’s favorite baseball player of all time was Emil Brown. He played parts of 10 seasons in the majors, but some of those 10 included game totals like three, six, and 13. He hit .258/.323/.398 in 2,508 career plate appearances. He had a couple of good years at the plate, and led two of the worst Royals teams in franchise history in RBIs. Fielding metrics and BP Annual comments would be quick to tell you he gave a lot of it back with his glove in the outfield. He finished his career with 1.4 WARP.

My father knew almost nothing of sports, but handled baseball better than the rest. He knew his cruddy eyesightâ€•damaged at birth by forceps, because that’s how old he wasâ€•turned him into an opposite-field hitter at grade-school softball. He would play catch until his knees crackled like an empty plastic water bottle before slumping into a lawn chair and declaring that anything he could catch was a strike, anything out of reach was a ball, and anything that knocked over his Diet Coke ended the game. He would clip out White Sox scores from the newspaper and email them to me in college, so I could read the same story I read online two days earlier. I never told him to stop.

Emil Brown learned under my father at Harlan High School on Chicago’s South Side. Not for baseball, of course, but high-school English. He wore the googly-eyed, shocked expression of a teenager who has seen his English teacher in the wild when my father dragged him over to me and exclaimed, “He hit a home run at Wrigley Field! In the city playoffs!” to a young son he hoped would understand the significance better than himself.

That shocked expression was always my father’s favorite thing about him. He had more stories about Brown's amazed reactions to his newfound stardom and the social circles it launched him into than observations from his games. By the time Brown got into his run with the Royals in 2005, the googly eyes were gone. At 30 years old, he was somehow on his eighth organization. He had bet on himself for a year of community-college ball to boost his draft position, trudged through a year as a Rule 5 player, and showed up in spring in a new team’s camp five years in a row. But my father still saw his student, even with the beard and thirty extra pounds of muscle.

He shouted “Emil!” for benign singles dunked to center field and routine catches in left during a stretch when Royals fans were rarely heard anywhere, let alone on the South Side. He dropped the crossword puzzle through which he watched every baseball game at home and let out a sincere “Wow!” at every update on the team RBI leaderboard of the 100-loss Royals. I don’t know if he was actually impressed or just thrilled that I cared about one of his students.

The last day of this regular season will mark a year since my father sputtered in his morphine-soaked sleep, the final stage of dying of leukemia, and sighed his last breath. He gave me a lot of things; one of them was loving Emil Brown, and knowing that every MLB journeyman could be someone’s solace, the walking proof that even if you teach 35 years in a neglected public high school on the South Side, you’ll live to see some of your kids win.

You see all sorts of stuff at the ballpark.

I was standing at the rail, watching Ken Giles throw a bullpen. He was coming back from a disabled-list stint, or maybe a stretch of bad innings, and I wanted to see how he looked. I glanced down the rail and saw two little kids standing nearby. They looked like brothers and wore caps that were slightly too big for them, perhaps a gift from a relative who wanted to give them something they could grow into. They were in that hard-to-figure time children occupy from ages 9 to 12 when it can be tough to nail down exactly how old they are, but if I had to guess, I’d say they were maybe 11. Their dad told them to stay put, then made eye contact with me, as if to say, “Just make sure they don’t set themselves on fire, okay?” and moved away to get a beer.

We three were standing there, watching as Ken Giles threw a slider, then a fastball. The catcher’s glove popped. Giles’ stuff was great. The boys looked displeased; a good Giles slider didn’t portend pleasant things for the Mariners. It was then that Little Guy A turned to Little Guy B and said, with a joy that made clear it was the first time he had ever said this word out loud, "Hey, f___ the Astros." The last two words came in a rush, but he luxuriated in the kick of the consonants, delighted in how hard and grown up the word sounded. His brother gasped and smiled, amazed at the courage it must have taken.

It was like finding someone’s diary and discovering the pages crowded with untested lines of poetry. It is rare for people without children of their own to see these moments of experimentation, of testing. His face registered how foreign the series of movements to form "f___" was. It’s an ugly, tired word, but he made it new.

And just like that, it was over. He remembered I was there and looked frantic, afraid that I was a narc. His shoulders tensed. His dad walked over with a beer and the little guy looked at me again, worried I would tell, but I just leaned into the rail and kept watching Ken Giles. His shoulders relaxed and he smiled brightly, knowing he had gotten away with something.

You really do see all sorts of stuff at the ballpark.

Adrian Matejka’s 2017 poetry collection, Map to the Stars, kaleidoscopes space—outer space and inner, as well as the spaces in which we live our lives: apartment complexes, basketball courts, the sprawl of suburbia and confines of classrooms. Behind the music of the spheres, too, there is other music in these poems, tight turns of alliteration and consonance, echoes and slant rhyme, an acute attention to sound that fills the verse front and back; Prince, EPMD, and the tracks of Voyager’s Golden Record also spin through the work. A committee chaired by Carl Sagan selected 31 tracks to launch into space, 31 aural artifacts to say This is Earth.

What might baseball put on its own Golden Record? Here are seven considerations.

1. The meeting of bat and ball:

The track should begin with a medley of hitting sounds, the varied music of the liner and the bloop, the blunted bunt and broken-bat crack. But in addition to the wealth of possibilities present in contact, the track should drive toward something, something larger. To choose just one example from all of baseball’s renowned sluggers, the pure hitters of history, is an impossible task and a hubristic one, but not to take advantage of the narrative potential in such a catalog of sounds seems equally unthinkable, and so I propose this example: Dee Gordon’s lead-off home run in the Marlins’ first game following the death of Jose Fernandez. Baseball’s Golden Record will carry other traditional exemplars of victory and prowess; let it also offer up a snippet of what baseball can mean.

2. The meeting of ball and mitt: a symphony of Randy Johnson fastballs, circa 2001.

3. The sound of a hot dog being launched from a cannon, because we have done a great disservice to the universe if we do not establish early baseball’s beautiful strangeness.

4. Vin Scully’s call of Hank Aaron’s 715th home run. Choosing one Scully call or one momentous broken record is difficult, but Aaron surpassing Babe Ruth’s home run total as captured by Scully is as momentous a baseball time capsule as one could imagine.

5. Harry Caray leading Wrigley Field in “Take Me Out to the Ballgame.”

6. Lou Gehrig’s goodbye speech at Yankee Stadium. Like so much of what is best in baseball, the weight of these words is only tangentially about baseball. For humanity to be judged by the grace of this moment: if only we could be so lucky.

7. Late Coors Field vendor Captain Earthman’s mile-high patter. Just in case he’s out there listening and can put in a good word for us. 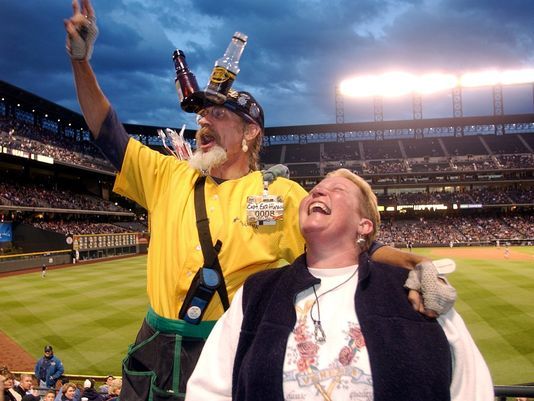 You need to be logged in to comment. Login or Subscribe
collins
These were all nice ones today.
Reply to collins
JPinPhilly
The kid cursing out loud for (probably) the first time is one of may favorites.
Reply to JPinPhilly
jfranco77
Beautiful article, James. I agree, they were all good today.
Reply to jfranco77