A Large Man, Once Small

Alfonso Soriano is swole. Jacked. Ripped. Rippling with sinewy majesty, with McGwire-esque biceps and Marlon Byrd–esque pecs. Because Soriano is now a few years retired, this isn’t particularly interesting to most baseball fans. But for those of us who were blessed with watching the former 40-40 man play on a daily basis, the revelation of Soriano’s muscles at Tropicana Field this week was a mild surprise. He used to be skinny! Muscular, but lithe in motion and loopy in swing, not traits that betrayed his impressive power. 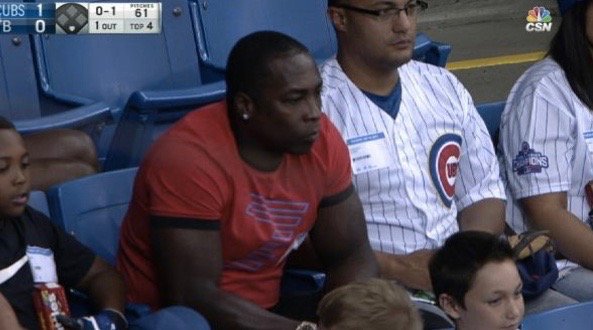 That Soriano hit over 400 career home runs and stole nearly 300 bases was a remarkable feat in an era of declining steal attempts and hulking power hitters. Only two other hitters have managed 400 homers and 200 stolen bases since 1999: Alex Rodriguez (the man for whom Soriano was traded in 2004) and Carlos Beltran.

Soriano brought to life the memories of skinny sluggers of decades past. His long legs, short trunk, and ample posterior recalled a young Ernie Banks; his crouched stance and long swing mimicked Dale Murphy. Like a time capsule filled with items our ancestors once thought important, Soriano was a sort of vessel for the vestigial skills of the early ‘60s, or the late ‘80s, or even the late ‘30s.

Yet the second-baseman-cum-outfielder resisted such interpretations with his wealth of idiosyncrasies. Soriano never figured out how to conquer the breaking ball off the plate that plagued his strikeout and walk numbers. He hopped while catching fly balls, to many fans’ consternation, only quelling his jittery feet very late in his career. And he balked at playing left field for the Nationals in his one season there, before taking kindly to the position and even starting in center for the Cubs the next year. In these ways, he resembles Hunter Pence, the platonic ideal of baseball players completely rejecting platonic ideals, and a man seven years Soriano’s junior. The weirdness and the nostalgia coexisted in Soriano, producing a skinny masher with 21st-century charm.

It is said that Soriano didn’t lift weights until the Yankees signed him out of Japanese baseball. Whether or not that’s true seems irrelevant to how we remember Soriano, and players like him. In many ways, he was a man out of time: a Twin Peaks pastiche of baseball genres that fits everywhere, but nowhere.

2. Anger – Where does Jason Kubel get off hitting 30 home runs for the Diamondbacks in 2012 and not telling us? Where was the media reporting this story? Do I have to watch every game myself? All of you are off my Arbor Day gift list.

4. Depression – I get it. The statistical accomplishments of any baseball player can only be accurately measured through the prism of what the ballplayer is internally capable of and I feel awful for denigrating them in my previous actions. Consider that 30 dingers is a lot for a man of Jason Kubel’s stature, since he was basically a fourth outfielder for all those years with the Twins, but it’s not like he’s Giancarlo Stanton, where a 30-homer season isn’t that great. Heck, I can’t even hit a single home run, and yet here I sit on my comfortable chaise lambasting a player for doing something so impressive that I don’t even remember it. It’s just so overwhelming.

There’s tons of stuff we don’t remember in a given year. It’s so selfish of me to say that just because I don’t remember something happening in a given year, that it didn’t happen. But I watch baseball all the time! And this was before I had a kid. Surely this would have registered in my head. I can’t believe what this is doing to me. I’m just going to log off for a while and stare into the abyss.