The Faces of the Home Run Surge

In the top of the eighth of Tuesday night’s game between the Royals and the Blue Jays, the Major Leagues' single-season home run record was broken by a solo shot off the bat of Alex Gordon. What follows are faces.

The Fans
Regardless of whether they were careful followers of baseball, the fans at Rogers Centre could all see Alex Gordon’s batting line, there in huge letters under his face, glaring at them from the screen: .208 average, .285 OBP, seven home runs. They’d seen him come to bat twice before in the gameâ€•an easy grounder in the third, a four-pitch strikeout in the fifth. Even when your team has blown as many late leads as the Jays have, it was hard not to feel complacent with Gordon at the plate. It was the eighth inning, after all, and they had a four-run lead, and it was a meaningless, gentle Tuesday night in September.

So when the historic homer was hit, it barely registered. The most extreme reaction was one of mild consternation. Chins resting in hands, the fans watched the ball sail over the wall in right center. It was already the third home run they’d seen that evening.

The Pitcher
The pitch was a mistakeâ€•a cutter that didn’t cut, that floated out over the plateâ€•and Ryan Tepera knew it. 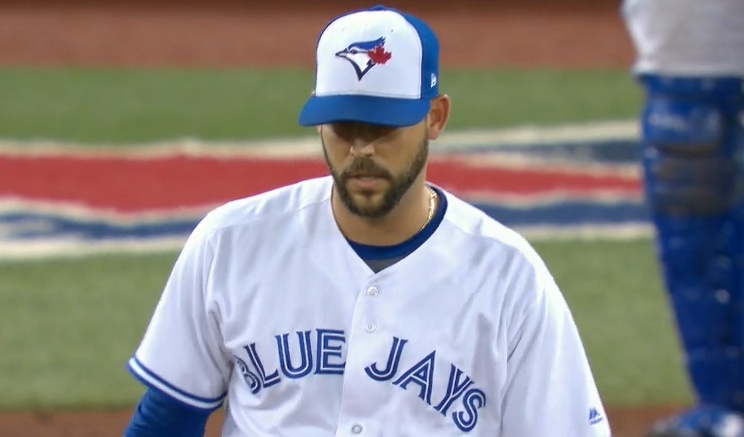 No one likes making mistakes. And though this particular mistake wasn’t costly in terms of the game’s outcome, it still must be a strange, unpleasant feeling to have your mistakes broadcast in front of a live audience of tens of thousands, a distant audience of millions more. To have them noted, archived, disseminated.

Of the six home runs Ryan Tepera has given up in this, the best season of his career, the one he gave up on Tuesday night is probably the only one that anybody will remember. 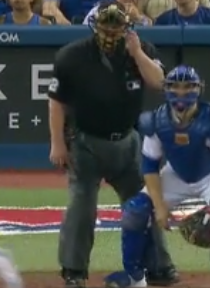 Homers may come and homers may go, but Joe West is eternal.

The Batter
Still in the afterglow of a World Series win 30 years in the making, the Royals signed Alex Gordon to a four-year, $72 million free-agent contract in early 2016. Since then, his production has cratered. His 2016 was despair-inducing, and his 2017 has been devastating. He’s OPSing .600. He is not the player he thought he was. 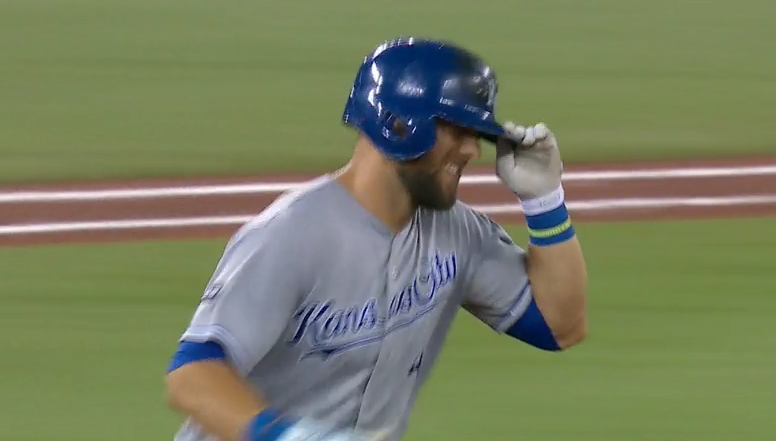 Even in celebration, then, Gordon’s actions were small and self-consciousâ€•he allowed himself half-smile, a brief touch of the helmet, a measured fist-bump. He didn’t want to make it last any longer than it had to; like the fans, he could see himself there on the screen as he jogged around the bases, see the numbers, now only incrementally changed. The story of Alex Gordon’s season is already written. Nothing he does now, no home run hit or catch made, can change it.

After the game, Gordon told reporters he wasn’t planning on keeping the ball. “I don’t really want to remember too much about this season,” he said.

So much for history.

The ball is a cork and rubber sphere encased in four layers of wool and poly/cotton yarn, covered in two pieces of cowhide, and stitched together by hand with waxed red thread. It is one of millions produced for Major League Baseball every year. 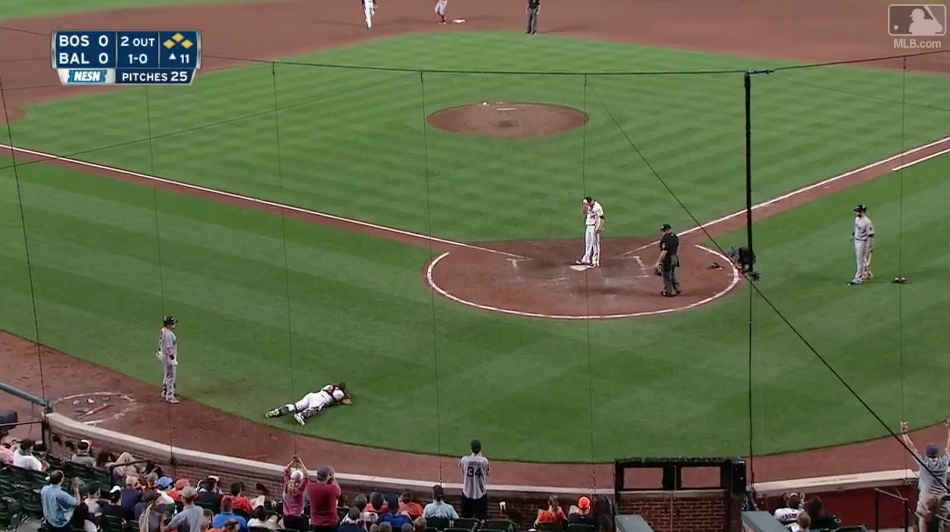 Baseball is predicated on failure. It’s a daily occurrence that sees even the most successful batter fail far more often than he succeeds, even the most talented teams lose inexplicably, and even the most rational fan clings to superstition to cope with it all. This fact, manifested in the microcosms of each game, leads us to constantly redefine success.

On Tuesday, the Red Sox and the Orioles submitted yet another entry to this long list of definitions. The teams entered the 11th inning scoreless, and as is now custom with Red Sox games, it seemed the two would remain in this stalemate for eternity. But Boston carefully loaded the bases, enabling Jackie Bradley Jr. to score on a wild pitch, breaking the tie and powering the Sox to a 1–0 win.

In a conventional sense, the Red Sox were awarded the victory and the Orioles the loss. But there is far more to the story than this superficial demarcation.

In baseball, success is meted frequently in opposition to justice. Those able to capitalize on the amalgamation of chance occurrences receive the praise while those foisted into situations where failure is unavoidable incur the blame. Contrary to the fan assumption that long-awaited success occurs due to a balancing of the scales, baseball affords these things at random. If you follow the steps correctly, there is no guarantee you will end up in any higher a place than one who eschews the process entirely.

In the "real" world, where human lives are tied to strident beliefs in the rule of law and the strict application of justice, such a notion is horrifying. It threatens to undercut the very purpose of civilization and strip individuals of their humanity, for without human reason, there is nothing, as a lengthy list of philosophers have declared.

But in baseball, as frustrating as it sometimes may be, it also provides comfort. There is satisfaction to be found in the idea that nobody will ever fully understand the sport. It gives us baseball fans purpose, in the sense that we can watch every game from here to eternity and still learn things about it. It can both embody mechanical progress and this sense of randomness that undercuts everything. And unlike in society, this break from justice enables us to experience the humanity at the center of this wonderful sport.

Bradley walked away from the game receiving praise which he deserved merely by being in the right place at the right time. He did not score due to his own merits—he reached first due to a force out and third due to consecutive walks. Simultaneously, laden with blame for the loss were Brad Brach and catcher Welington Castillo. Strictly speaking, this tandem lost the game for the Orioles. It was Brach’s wildness and Castillo’s game-calling that led to Bradley scoring. But both were placed in a position where failure was the likeliest outcome, and for that, they are punished.

No party received from these events what it should have, but maybe today or tomorrow or two years from now, their positions will be reversed. It will be Brach celebrating in the dugout while Bradley lays on the field. And then we can revisit this exact moment and look at these players as they are: as human beings caught up in baseball’s whims. We can see that the only real failure inherent in baseball is the failure to recognize this humanity.

The highlight says “Matt Kemp,” but who could be sure?

This wasn’t the man whose face adorned the banners around Petco when I vacationed in San Diego several years ago, a forced symbol of youth and energy. This isn’t the man with the crooked smile. This isn’t the man who stole 40 bases in 2011, or even the man who stole 39 in the six years since. This man hid in navy, under a prison beard, swung a bat like a middle-aged father builds a homemade shed. I don’t even know why he’d be here, writing the introduction for a team’s story that will surely fail to include him. It’s just another September lie, the dreams of a mid-afternoon tavern dweller, a pull tab that wins a free pull tab. This isn’t Matt Kemp. It’s a wasp’s nest growing under the eaves of a neglected corner of the house, a student loan repayment reminder notice.

There are ronin, banished from their homes and forced to wander the earth, subsiding on the pettiness of human nature. And then there are refugees. Kemp’s career as Matt Kemp is obviously over: the elasticity of tissue that all twentysomethings mistake for endurance, the arthritis eating away at his agility. We all enter adulthood drunk on the notion that we can do anything; for one season, in 2011, Kemp actually could. What remains are the $20 million per year paid in part by teams and cities different than the ones that worshipped him, that understood who Matt Kemp was.

Even this instant of glory bears no glint of the renaissance. The pitch is dead center, and as the line drive rises the Nationals fielders look down and away, motionless and ashamed, knowing that this was theirs, not his. In his act of greatness, Matt Kemp is still just the moral of someone else’s story.