This article is a summary of the research done by Kate Morrison and Jeff Long for their Saber Seminar presentation. You can find the slides from their presentation online here.

When Baseball Prospectus released our pitch tunnels data back in January, we were honest about the realities around the data. At the time, we had some idea of how the data could be used to analyze pitchers, but we certainly didn’t have it all figured out. Of course, while it’s valuable to have new tools through which we can analyze and grow our understanding of the game, we hoped that our pitch tunnels data would prove to be more.

Recently, we added some batted ball outcomes to the data on the stats pages of BP, allowing you to not only see how a pitcher’s pitches look in flight, but to also see what that means in terms of batted ball outcomes. This is, we believe, a big step in being able to better determine the impact that something like pitch tunnels might have on the field. We were thrilled to see what might come out of groups using the data at the SABR analytics conference this spring, and some of the work was truly remarkable.

One of the participants, Scott Spencer from Columbia University, took things a step further and put together a terrific analysis of the impact of pitch tunnels on whiff rates. Spencer has helped us bridge the gap between analysis and on-field application, as his work suggests that pitch tunnels impact whiff rates greatly. His conclusion, seen below, would seem to agree with some of the initial work that Jonathan Judge assisted with when we rolled out pitch tunnels[i].

The model here suggests that varying the pitch tunnels and break points can have a significant effect on how likely a batter is to swing through a pitch. Not only that, but while we tend to think of contact ability as a trait independently inherent in the batter, the way pitchers approach him can significantly affect whether, and to what extent, holes exist in batters’ swings.

For our Saber Seminar presentation, we looked to find other applications of the pitch tunnels (and related) data. What follows are two distinct areas where we’ve found opportunities and potential examples of pitch tunnels data applied to actual games.

The Pitcher Tunnels Made

Astros left-hander Dallas Keuchel seemingly came out of nowhere to become one of the best pitchers in the American League in recent years. Keuchel lacks premium stuff, at least compared to the velocity-laden pitchers who seem to be most effective these days. Still, Keuchel has been effective, winning a Cy Young award in 2015 and pitching to a 2.48 DRA so far this season. So how has he done it? It’s been a journey and it all starts back in 2013, his first full season in the major leagues.

Keuchel’s first full season was not a pretty one. After posting a 6.80 DRA over 85 innings the prior year, he was only able to modestly improve upon that performance in 2013. Over 153 2/3 innings[ii] Keuchel posted a 4.95 DRA, a mark that was roughly 19 percent worse than the average major-league pitcher that season. Before 2014, however, it’s clear that Keuchel and the Astros made some changes. 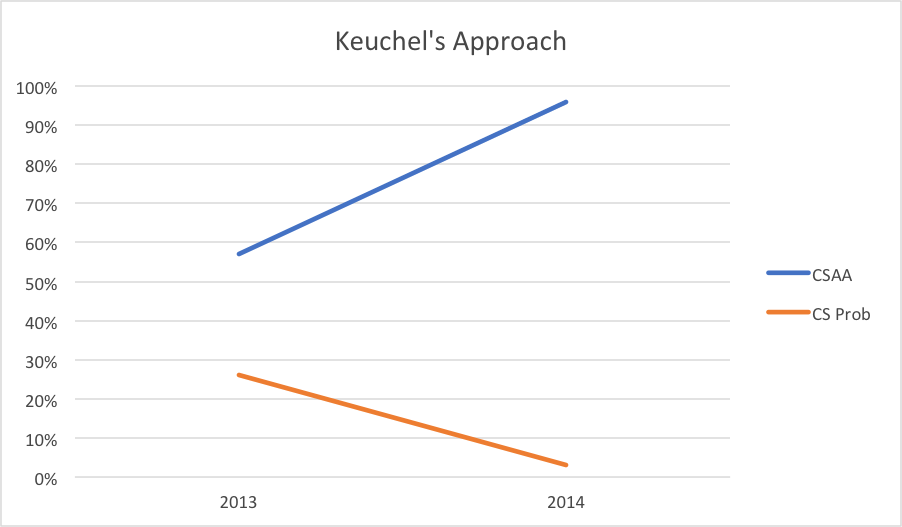 In 2013, Keuchel was in the 26th percentile for Called Strike Probability (CS Prob), and the 57th percentile for Called Strikes Above Average (CSAA). His CS Prob of 46 percent meant that roughly 46 percent of the pitches he threw were likely to be called strikes, which put him just above the bottom quartile in the league. He wasn’t getting "extra" strikes either, with just 0.3 extra strikes per 100 pitches according to CSAA.

Fast forward to 2014 and Keuchel was a different pitcher. He fell to the third percentile for CS Prob, meaning each pitch he threw was less likely to be a strike than the previous year. This coincided with a significant increase in CSAA, with Keuchel gaining 1.8 extra strikes per 100 pitches in 2014. That’s a six-fold increase in his ability to get extra strikes. This all suggests that Keuchel focused on working the edges of the zone, even if it meant throwing many fewer strikes.

In 2015, Keuchel’s Cy Young-winning season, he made some incremental improvements on many of these same attributes. He moved down to the first percentile for CS Prob, with a lower likelihood of generating called strikes on a given pitch than almost every other pitcher in baseball.[iv] He shrunk his pitch tunnels even further, moving from the 91st percentile to the 95th percentile.

At that time, Keuchel also focused on making significant improvements in other areas. During the 2015 season, Keuchel improved the repetition of his release point, moving from the 76th percentile to the 91st percentile.[v] While hitters were already having a more difficult time telling his pitches apart at the tunnel point, they now couldn’t look to his release for any clues either.

Ultimately, there were clear changes to Keuchel’s approach and mechanics. The result was incremental improvement that resulted in his ascent from mediocre pitcher to one of the best arms in baseball. Of course, if we’re looking at mechanical and approach changes made by Keuchel, that’s just the tip of the iceberg. Under the surface there were other changes still.

It wasn’t until 2015 that Keuchel became the Cy Young-caliber pitcher who led the league in ye olde ancient stat wins and in innings. There’s a reason for that, though, and one that can be determined through examining the pitch tunnel data for 2013, 2014, 2015, and 2016 (the year that performance fell apart). Whether by design, or as a result of changing his mechanical approach, Keuchel simplified his pitch-pair arsenal from 30 pitch pairs to 25 pitch pairs between 2013 and 2014, and in 2015, he stayed with using only 25 different pitch pairs, as you can see illustrated below.

In 2016, we can see that he suddenly jumps up to using 35 distinct pitch pairs, and was seeing a lot less success. Now, while we have yet to determine whether number of pitch pairs predicates success, or simply is an indicator of it for the pitchers for whom this style of pitching benefits, in Keuchel’s case, when he struggles he attempts to “change things up” more, and that seems to create more struggles.

What does this mean for sequencing overall? Tunneling is only achieved through sequencing, but not through what one might think of as conventional sequencing. Conventionally, a pitcher with a big breaking ball—one that deviates a lot from the path of his fastball—would be encouraged to be able to “throw any pitch in any count,” keeping the hitter from being able to “guess” what pitch is coming. Tunneling doesn’t entirely erase that—after all, the desired effect of tunneling pitches is still to fool batters—but it changes the way we think about how the hitters observe the pitch. Whereas a pitcher with a looser release point may need to throw all four pitches during an at-bat in order to have success, a pitcher who tunnels could possibly throw only a fastball and a changeup.

Since the pitches look the same until they split, ideally after the decision point, there’s more guess-work involved for the hitter. It helps to look at a specific pitcher and some of their pitch-pairings, to really get a solid grasp of what tunneling can do. In Keuchel’s case, he threw a sinker-to-sinker pair most often in 2015, at 25.2 percent of the time. On that pairing, he threw the second sinker for a strike nearly 40 percent of the time, and induced a ground ball 16.1 percent of the time—both outcomes more conducive to outs.

As one would assume with two pitches of the same type, his tunnel difference between the two was minimal, even when accounting for picking locations. This isn't really surprising, as most pitchers throw their fastballs (or equivalent) most of the time. Where one can really see the effects of tunneling is in the results that Keuchel generates off his sinker-to-changeup pairing. In his Cy Young-winning year, if a hitter saw a changeup after a sinker, they would end up with some out-friendly result—either a strike our a ground ball—63.6 percent of the time.

While in Keuchel’s case, his pitch-pair changes were too methodical for us to consider that they might be accidental—and the change in results he saw too tied to what he used—sometimes pitch-pair changes are completely accidental. Sometimes, pitch selection relies more on the catcher than on the pitcher, and sometimes there are days when a pitch, even a previously solid and consistent one, just doesn’t feel right.

Not every pitcher adheres to this theory—the hallowed Greg Maddux “stream of milk”—nor should they. Clayton Kershaw is a good example of a pitcher who breaks these rules for good reason—when he drops down on his sinker, he’s ruining any tunnel that he’s previously created, but he’s also breaking the hitters' eyeline. Not every pitcher can make their pitches have that subtle break, where the hitter can’t make a decision, so they have to approach the problem in other ways. For some pitchers, this involves varying their arm slot, or having pitches with such big break that it interrupts the hitters’ ability to focus on where the ball will or should cross the plate.

Tunnels is one specific method of pitching that can help a certain class of pitchers, and Dallas Keuchel is one of the best examples of that breed.

[i] Anyone interested is encouraged to take a look at Judge’s suggested modeling opportunities with the pitch tunnels data, found here.

[iii] In 2014, back-to-back pitches from Keuchel averaged just over nine inches of separation at the tunnel point.