The most serious challenger for AL MVP last season mounted that assault on Mike Trout’s throne with a 7.5-WARP season—combining elite defense and baserunning with very good hitting. Unlike many who derive value from non-offensive exploits, Mookie Betts earned superstar recognition, possibly because of how often those exploits translated to re-tweetable video highlights. And also because he ended up with 31 homers to go with his 26 steals and world-class defense.

Altogether, his WARP ranked fifth in baseball while he clocked in (among hitters with 500 or more plate appearance) with the 18th-best OPS and 35th-best TAv. Extreme athleticism and youth swirled around in our minds, implanting a stronger-than-usual idea that this just was his bat, and maybe it would even get better. His 50th-percentile PECOTA projection envisioned a .308/.366/.503 slash line—a .296 TAv that would have mirrored 2016’s precisely.

Skim that same projection and you’ll see that it foresaw 5.6 WARP. OK, you’d say, cross-referencing with Betts’ actual 2017 stats. He’s got 5.3 WARP right now! Great! However, his offensive contributions (.262/.344/.448, .274 TAv) have missed even the 20th-percentile projection’s mark. He’s just somehow improved his tippy-top-of-the-world performance in the field and on the bases. He has admirably turned on the defense and baserunning afterburners to counter the regulating, gravitational forces dragging down his offense.

But it’s only healthy to channel our inner projection system in moments like this: What factors are weighing on him, and is he likely to defy them going forward?

Swinging hard enough to rank among the game’s top 30 home run hitters is rarely conducive to making contact on 94.8 percent of the strikes you offer at, which is a thing that Betts did in 2016. Or, put more appropriately in Betts' case, making contact on that many swings might not lead to maximized quality of contact.

The few recent hitters who have managed to scale the homer leaderboards while maintaining those contact levels—outside of peak Albert Pujols—generally don’t limit their chances by taking strikes. Think Robinson Cano and recent vintage Daniel Murphy. This season, for comparison, Cano is more likely to swing at any given pitch (52.3 percent) than Betts is to swing at one in the strike zone (50.8 percent).

It’s an evolutionary adaptation for Cano. Betts, meanwhile, has one of the most discerning eyes in the game, springing into motion less often than all but two other hitters. This is where what we know morphs into a hypothesis: Perhaps Betts, who has predictably seen far fewer strikes this year, is struggling to find the right pitch to hit. If that sounds too simple, it’s because it almost certainly is.

But consider just how extreme his bat-to-ball skills are: Of 314 players with 400 swings in the majors this year, Betts produces out-of-play foul balls on the smallest proportion of them, while Nationals third baseman Anthony Rendon (carrying nearly identical contact rates) produces fouls on the largest proportion of them. It’s almost 200 extra swings Rendon gets to just throw away as practice.

Betts doesn’t swing and miss. And he doesn’t foul pitches off. So he is also the major leaguer most likely to have a swing turn into a ball in play. Even though it seems absurd to label it a “problem” … it does mean more mediocre or worse swings end up deciding his outcomes. And that sounds kind of daunting, doesn’t it?

Selectivity is a good thing for the obvious reasons, but also because most hitters are a) only so good at it, and b) not so terrifying or renowned that pitchers would ever truly eliminate the meatball of choice from their diet. Betts, of course, hasn’t seen the high inside heaters he feasts upon vanish, but they are noticeably less frequent.

Some cutters and sliders and sinkers have replaced some four-seamers. And pitches on the outside or around the fringes of the zone have replaced whatever desire existed to challenge Betts. It’s only to be expected from the pitchers, because he’s still hitting up-and-in fastballs like a madman.

Maybe because of last year’s success on pulled fly balls, Betts has become very unlikely to go the opposite way in 2017. And, simultaneously, his pop-up rate has spiked up toward the top of the league. Whether that has something to do with the little changes mentioned so far, it’s hard to say, but his 67 pop-ups are the chief culprit for his depressed BABIP.

And that is theoretically easy enough to correct for a patient hitter like Betts, either by feeling out the pitch locations and types that aren’t proving fruitful, or allowing those outside pitches to go to right field a bit more often. If forced to bet on a 2017 stat to improve in 2018, Betts’ BABIP wouldn’t be a bad choice.

A smaller (probably much smaller) piece of that BABIP regression might just be lost to contemporary defensive knowledge. Baseball Savant allows us to see where outfielders set up against a given hitter. And this much is clear: Betts’ season and spray chart convinced some teams to place their fielders in deeper starting positions.

On Betts’ batted balls this year, the center fielder has been playing 321 feet away, on average. That’s five feet deeper than they averaged in 2016. Of note, the gap is identical if you filter for only road games, where Fenway Park’s oddities don’t have a role to play.

This is, to reiterate, harder to quantify. It’s definitely a smaller piece of the picture than the pop-ups. And it may be outweighed by simple randomness some years. But it’s something. It’s worth wondering whether the gaps on his spray chart (I used Toronto's ballpark as the canvas to get a clear expanse of the outfield, but you’ll note the Green Monster’s effects in left field) got a little smaller. 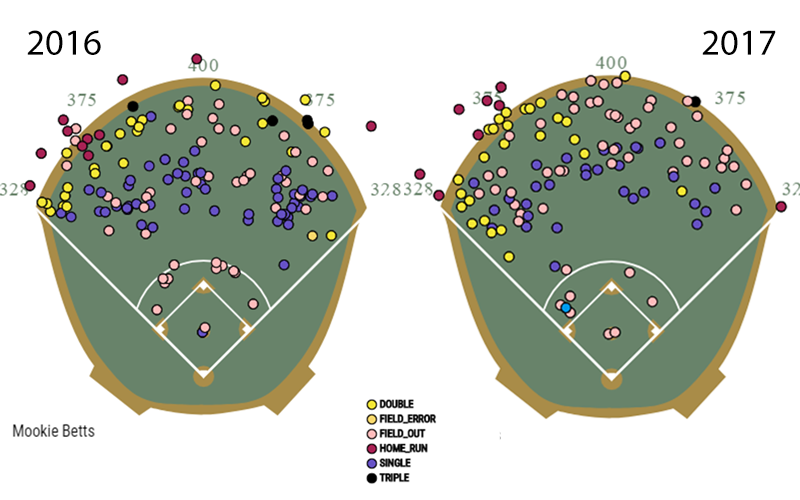 Also, here’s a double that, this time, will count as an out.

His true-talent power levels are less apparent. While Betts will never lack for extra-base hits, generally, it’s possible that 2016 was his home run peak. Every player who posts a 30-homer season can think of at least a couple balls that got some sort of assistance (via wind or park or weirdness), but Betts probably benefited from more of those than most.

His seven homers of 360 feet or less led the majors in 2016. As long as he’s playing in Boston (and/or against the Orioles), he’ll have a shot at replicating that sort of luck, but it’s neither worth counting on nor a prerequisite for star-level hitting.

Factor #5: The nebulous other

Look. I’ve done this before—poked through the tangled web of reasons and moments and coincidences that make up a hitter’s performance, trying to decipher why this web is a little less impressive from a distance than the last one or the overall career web. Sometimes the guy just snaps out of it and destroys the league for weeks on end, then tells reporters about a little injury that hindered his stance, or a personal distraction, or a tidbit about how his place in the lineup was affecting his approach. Or, you know, he reverses his BABIP luck on a dime.

Betts might do that. He might be doing it now, since he smacked two homers out of Fenway Park mere hours after I began committing this analysis to digital paper. It happens. But I don’t feel it diminishes the intrigue of the lean weeks or months or years. Even while clinging to hitters as the relative rocks of the game, we encounter mystifying stretches of seasons or careers where the explanation is a collective shrug.

It can feel needlessly picky to dissect the valleys of a great career when the next peak will seem retrospectively obvious. But players as good as Betts are the sum of a great many issues solved and slumps busted, while lesser talents are just guys who got stuck more often, or more interminably. This is the grind of the game. And if we don’t put our finger on an answer to this particular question, well, maybe we’ll have a head start on the next one.

You need to be logged in to comment. Login or Subscribe
oldbopper
This is September 24th and I just watched Mookie throw out a runner trying to go from 1st to 3rd, hit a game tying 3-run double then score from second on a topped roller down the 3rd baseline. He may only be hitting .263 but he is still an absolutely amazing player.
Reply to oldbopper