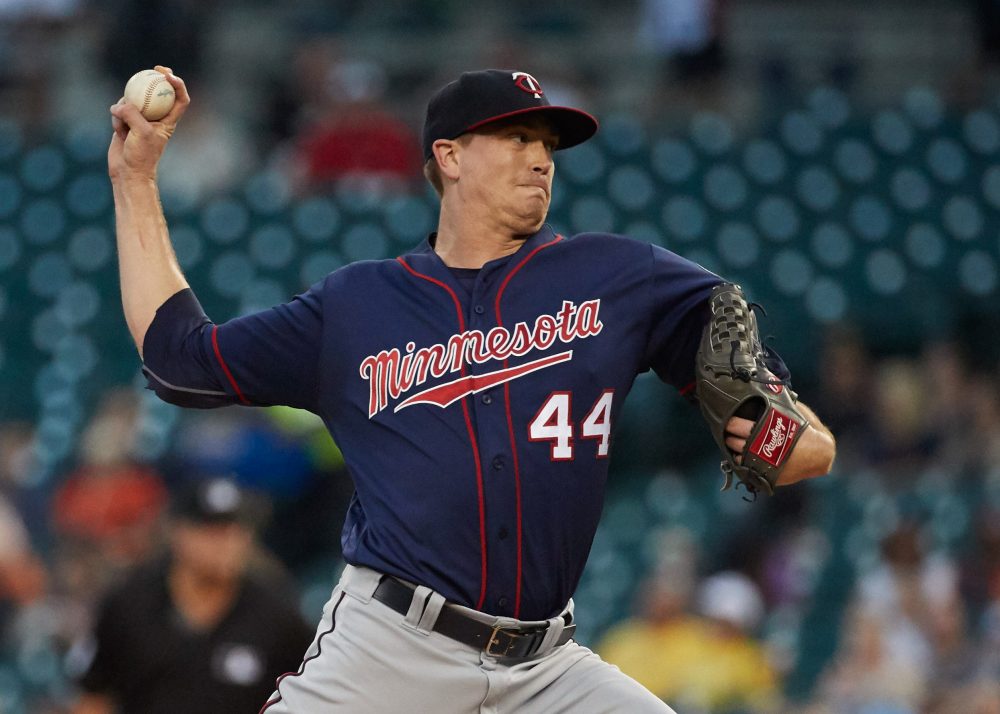 While you weren’t watching, the Twins added a third dangerous arm to their prospective playoff rotation. While you were fawning over adorable, ancient, rotund, polygamous Bartolo Colon and mulling whether the team could cobble together a competent fifth starting slot, Kyle Gibson evolved into the solid, efficient, mid-rotation innings-eater he always ought to have been.

After Tuesday night’s gem (six Bartolo’s plate-level clean innings of shutout ball against the lowly Padres), Gibson owns a 1.38 ERA over his last five starts, with a 26-to-3 strikeout-to-walk ratio in 32 2/3 innings. In fact, since being exiled to Triple-A (for the first of two times this season) in early May, Gibson has made 23 starts (20 with the Twins, and three with the Rochester Red Wings), posted a 3.94 ERA, pitched 132 1/3 innings, faced 563 batters, struck out 108, walked 45, and induced ground balls on more than half of all batted balls against him.

A career that seemed very much in jeopardy as recently as a month ago now seems to be on a steady, upward trajectory. If you’re here for the One Weird Trick answer to the riddle of Gibson’s modest breakout, though, I’m afraid you’ll be disappointed. With any pitcher as broken and removed from his own potential as Gibson was earlier this season, Several Weird Tricks are required.

Here are the ones I can identify in Gibson’s case: 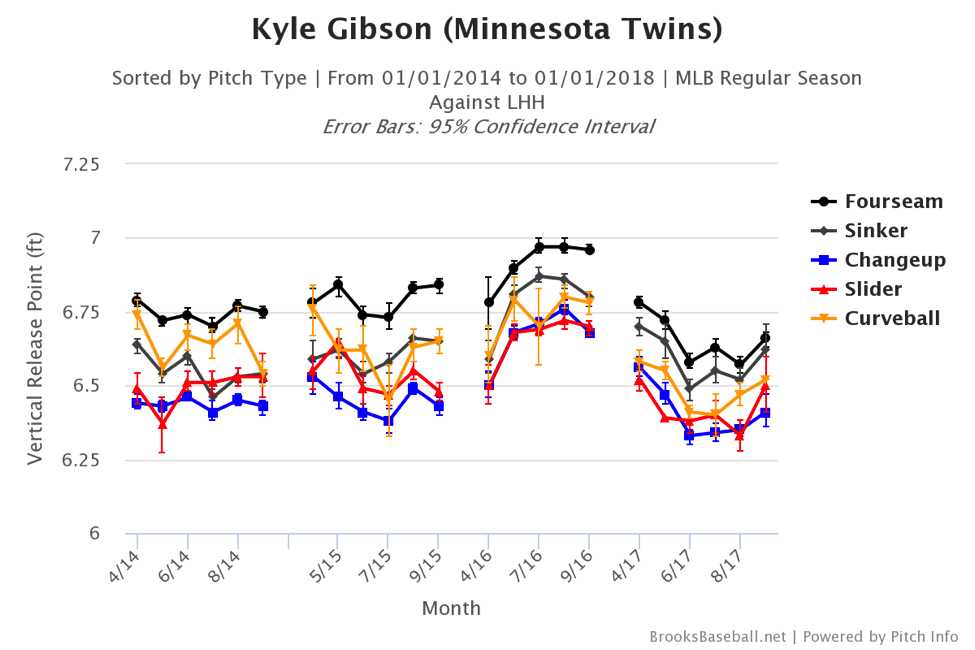 Gibson has a fairly high natural arm slot, but over his career, he’s somewhat lost touch with it, and has even artificially raised it—with disastrous results. When Gibson releases the ball from a higher sheer height, it’s usually because he’s either tilting his spine sharply to the left (carrying him off a straight line toward his target and wasting some of the energy in his motion) or not bending the back enough at all. Not the way the release point rose throughout 2016. That was Gibson (hampered by pain in his shoulder and lower back) simply landing on a stiff front leg, staying high throughout the drive phase of his delivery, and throwing without finishing strongly.

Recognizing that issue, Gibson consulted a former coach from his amateur days this winter, and landed at the Florida Baseball Ranch. There, he retrained his shoulder muscles to absorb the energy of completing his release and allowing his arm to recoil. The resulting arm path was a bit lower and considerably easier to repeat, and it began to pay off as he tapped into other mechanical improvements later in the season. 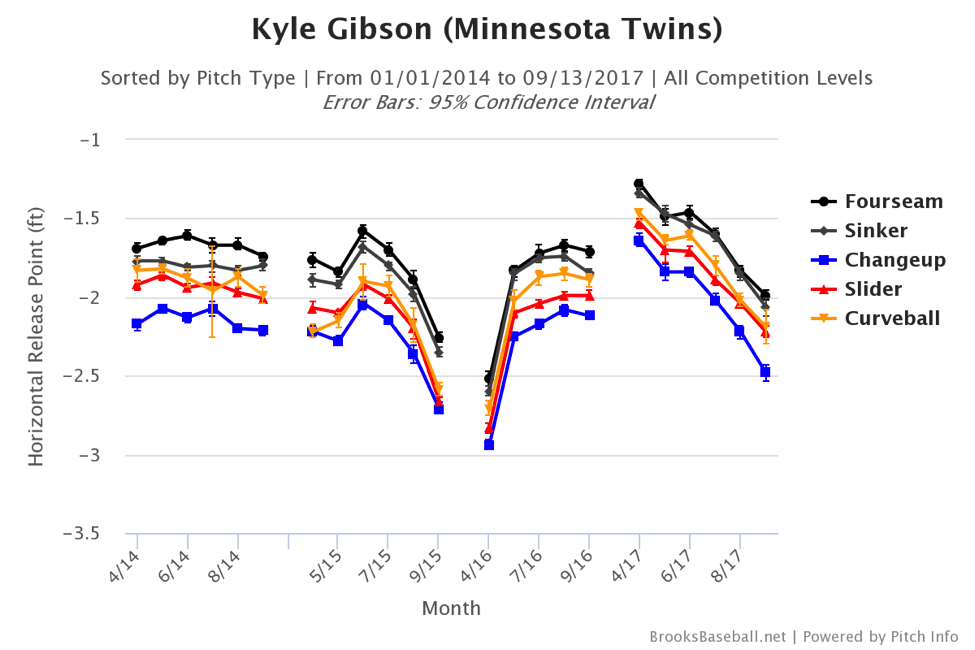 Gibson has always relied heavily on his sinker, so pitching from the first-base side of the rubber has generally made sense for him. As he began to make mechanical adjustments that improved the way the ball left his hand, though, he still struggled with command problems. Moving to the middle of the rubber, in conjunction with that slightly lower arm slot, helped him get better aligned with his target. (It didn’t hurt that it also changed the angle a bit for left-handed batters, who get a bit less of a look at the ball during Gibson’s windup this way.)

3. Getting Into His Legs

This is a phrase you hear often from hitters, especially in this era of emphasizing fly balls and the need to get to low pitches consistently. Batters want to have their whole body engaged in the swing, and to be able to use the flexion in their legs to both adjust the plane and height of any given swing, and manage the transfer of energy and balance as they execute that swing.

In a pitcher’s case, making adjustments mid-delivery isn’t usually necessary. When it comes to balance, stability, and energy transfer, though, the lower body still plays a huge role. Gibson’s has, at times, been a robotic and stiff lower half. It’s robbed him of power, interfered with his command, and yes, stopped him from modulating his delivery to make certain pitches on different planes, or to different quadrants.

Sometime in mid-August, he changed that. Watch video of Gibson from early in the season, and you’ll see a “tall and fall” delivery: a fairly straight post leg, a landing leg that stiffens quickly at foot strike, and a lot of the creation of torque left to the torso and arm. Recently, he’s bending his knees more, both during leg lift and after the front leg lands. This isn’t the right thing for every pitcher, but in Gibson’s case, it has given him stability. It’s given him the ability to delay the rotation of his torso an extra click, creating more power and improving his timing.

It’s also interacted with the changes he made over the winter. With the reduction in spine tilt he worked on back then, and with his center of gravity riding a bit higher, Gibson has begun staying back with his upper half more. When he does fully allow the energy of his landing leg to move up into his back, then, he comes over that leg and bends forward more at release. On video, you can see a mild version of Max Scherzer’s head movement from Gibson lately, and the reason is that (like Scherzer) Gibson has added a bunch of well-directed energy to the final phase of his delivery, snapping his upper half toward the plate as if spring-loaded.

Funnily enough, back in March, Gibson spoke about de-emphasizing extension at and beyond release point. He said the folks at the Florida Baseball Ranch helped him understand that the value in “getting out front” is a myth. By staying back more, however, and thanks to the other changes he’s made, he’s actually getting more, better extension (and posting better Statcast-estimated perceived velocities) than he was at any time in 2016. 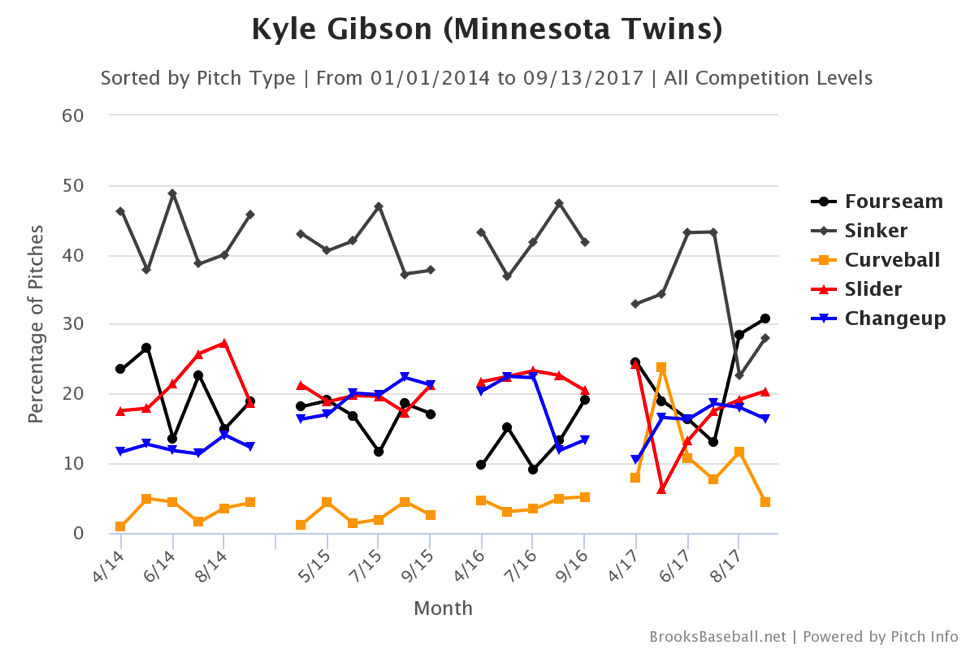 The most obvious change Gibson has made, of course, is one that can easily be observed without an especially keen eye for pitching mechanics or an intimate knowledge of Gibson’s medical history. He’s become a five-pitch pitcher, especially over the last month or so. Specifically, he’s throwing his four-seam fastball much more often than he’s ever thrown it before, and his curveball (a pitch on which he’s also tinkered with his arm action a bit, to change its shape and appearance out of the hand) is more a part of his arsenal than it has ever been in the past. Gibson’s changeup (a pitch rarely discussed, because it was never very effective back when it was just used alongside the sinker-slider combo) has been harder than ever and is inducing ground balls at an impressive clip.

More important than whether any of the new or improved offerings are dominant (they aren’t) is that Gibson has them, and can keep opponents so much more off balance with them. He faced the Royals in consecutive outings earlier this month. In the first contest, he threw 30 sinkers and 15 four-seamers. In the second, it was 42 four-seamers and 17 sinkers. In the two outings, combined, he pitched 13 innings, allowed 13 hits, walked one batter, hit one batter, fanned five, and let in only two runs.

It’s possible that Gibson’s improvements will be short-lived. That’s just baseball. That the Royals didn’t strike out during their second look at the new Gibson on September 7 is a reminder that he still doesn’t have a true out pitch. He’s fully healthy right now, but that won’t necessarily remain true in the weeks and months to come. For now, though, he’s shutting people down, thanks to a new starting point, a wholly new delivery, and a vastly improved pitch mix. If the league doesn’t adjust too quickly, he could even carry that success into October.