(Note: Last year, I wrote "One Entire Season of Baseball From the 1970s," reviewing the 1971 season. My goal is to repeat the exercise every summer, selecting a different decade. We'll present the 1960s version Monday through Thursday this week, five teams at a time, introducing each team with salient figures from their season. Monday's entry is here, Tuesday's entry is here, and Wednesday's entry is here.) 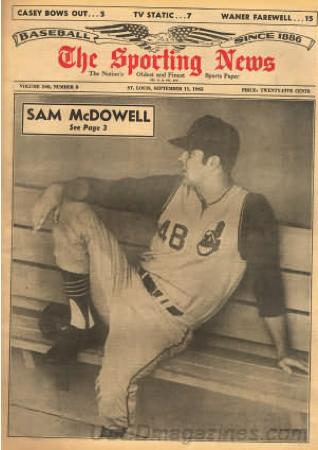 Amazingly, he kept up that pace for five more years, leading the league in strikeouts in four of them (and walks in three) before wearing down. He pitched only 82 2/3 innings after his 30th birthday. McDowell, who battled alcoholism as well as arm problems, was Nolan Ryan before Nolan Ryan came along, posting prodigious strikeout and walk totals through his 20s.

The 1965 season was typical McDowell. He struck out 29 percent of the batters he faced, leading the league, far ahead of teammate Sonny Siebert, who was second with 26 percent. (The league average was 16 percent.) McDowell, though, was third in the league in walk rate (12 percent). He struck out 325, 99 more than runner-up Mickey Lolich, while walking 132, 19 more than Boston’s Dave Morehead.

He allowed the lowest batting average (.185), slugging percentage (.244), and OPS (.531) in the league. Sandy Koufax was a unanimous choice for Cy Young that year—there was only one awarded until 1967—and McDowell finished only fifth among pitchers in the AL MVP vote, presumably because he pitched for a non-contender and compiled a 17-11 record. As you might guess, Cleveland scored just 3.5 runs per game that McDowell started, the lowest run support on his team and 12th-lowest among the 42 pitchers who started 20 or more games in 1965. 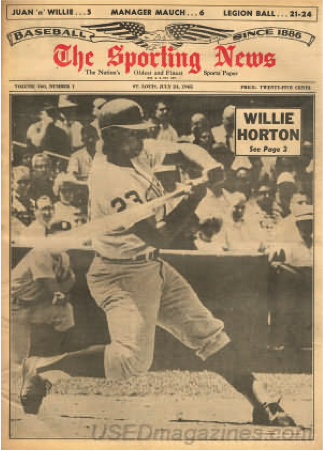 The only other AL team that got as many starts from its top five starters was Boston, whose starting corps was considerably less successful (4.19 ERA vs. Detroit’s 3.47). Lolich was seventh in the league in innings, McLain was 13th, Aguirre was 17th, Wichersham was 22nd, and Sparma was 37th.

Of the quintet, McLain was 21 years old, Sparma was 23, and Lolich was 24. Such heavy workloads, both game-specific and season-long, would be unthinkable for such young pitchers today. 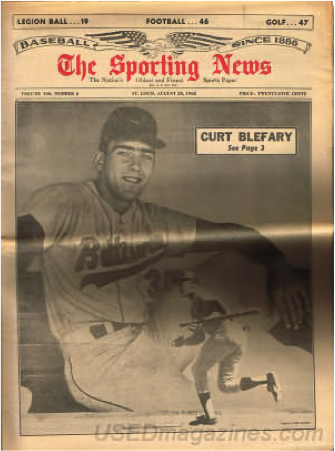 Shortstop Luis Aparicio (.250 TAv) and center fielder Paul Blair (.243), both of whom were weak hitters, bunted 14 and eight times, respectively, which is defensible, but right fielder and Rookie of the Year Curt Blefary had seven sacrifices, third baseman Brooks Robinson had four, left fielder Boog Powell had four, and first baseman Norm Siebern had two. And they were, by far, the Orioles’ four best hitters.

Rather, the Orioles just liked bunting. From 1965 through 1975, under Hank Bauer and Earl Weaver (Weaver replaced Bauer in the 81st game of the 1968 season), Orioles position players bunted 664 times, an average of 66 per season, second in the league to only the chronically weak-hitting Angels with 692. Weaver became famous for eschewing the sacrifice, but his epiphany didn’t occur until 1976. 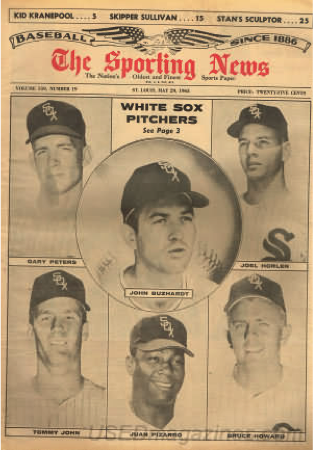 2. Chicago White Sox, 95-67: 53. The save rule would not become an official MLB statistic until 1969, but the White Sox are retroactively credited with by far the most saves in the majors in 1965, 53, eight more than the Twins in second and 12 more than the Orioles and Giants in third. Eddie Fisher is credited with 24, tying him for second in the AL, and 42-year-old knuckleballer Hoyt Wilhelm had 21, tied for the sixth-most.

Chicago’s starters were superficially good; their 3.24 ERA was fifth in the league, only 0.04 behind the second-best Angels. But White Sox Park was an extreme pitcher’s park, suppressing run-scoring from both sides of the plate by 11 percent, the most in the league. This is partially evidenced by the team’s 4.63 starter DRA, third-worst in the league. The relief corps had a 2.54 ERA and 3.72 DRA; no team had a wider spread between starter and reliever ERA and DRA.

In 2017, despite an uptick in saves requiring more than one inning pitched (13 percent of saves so far vs. 9 percent last year), nearly seven of eight saves have lasted an inning or less. In 1965, the White Sox notched seven one-inning saves. Another six were two-thirds of an inning, and four comprised one out (including two by 22-year-old, left-UCL-intact Tommy John).

The remaining 36, or 68 percent, were more than an inning. Used exclusively in relief, Fisher pitched 165 1/3 innings, Wilhelm 144, and Bob Locker 91 1/3. No reliever has pitched more than 100 innings since the Yankees’ Scott Proctor in 2006, and none have eclipsed Locker’s total since the Mets’ Carlos Torres in 2014.

1. Minnesota Twins, 102-60: 44 percent. That’s the percentage of career value, as measured by WARP, that Twins shortstop Zoilo Versalles, the American League MVP, generated in 1965. Think WARP is overstating it? Both Baseball-Reference and FanGraphs WAR peg his 1965 at more than half his career value. Versalles played 12 major-league seasons and was a batting title qualifier in seven of them. 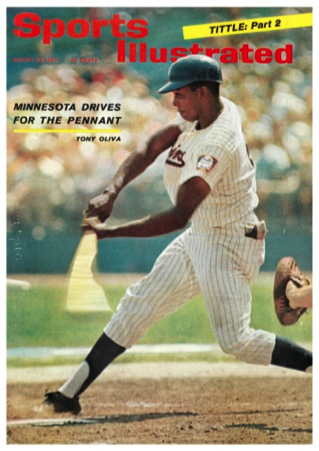 Whenever somebody compiles a list of fluke MVPs, Versalles gets mentioned. That’s only partly fair. There’s no question that his 1965 was an extreme outlier. He batted .273/.319/.462 that year compared to .238/.286/.353 in his other 4,850 plate appearances. He set career-highs in just about everything that matters, including on-base percentage, slugging percentage, OPS, total bases, runs, RBIs, hits, doubles, stolen bases, and stolen base percentage.

Just two years later, his .200/.249/.282 line was one of the reasons the Twins finished a game behind the Impossible Dream Red Sox. But that doesn’t make him undeserving in 1965. He was 20th in the league in TAv, 16th in OPS, and 11th in ISO. He was an outstanding baserunner, leading the league with 10.4 BRR. And he not only played the key defensive position of shortstop, he played it well; his 2.3 FRAA was fourth in the AL among shortstops.

All told, by WARP, he was the second-best player in the league, with 6.4, trailing only the Indians’ Vic Davalillo, whose 6.6 WARP was fueled by the highest FRAA in the league. Again, if you don’t like WARP, he led the league in our two colleagues’ WAR. So while Versalles was undoubtedly an unexpected MVP, he certainly wasn’t an undeserving one.

I’ve alluded to some of the differences between baseball in 1965 and the contemporary game. I’ll close with a few tables comparing 1965 to 2016. I chose 2016 rather than the current season because we’re not done with 2017, and there are seasonal stats-distorting effects in September.

Source:
https://www.baseball-reference.com/leagues/MLB/misc.shtml
Reply to DavidHNix
mainsr
Thanks David. Yeah, the figures I used were average time for a nine-inning game. That phrase didn't fit in the document I gave our editors but I think they magically bought me some space, so I'll get that adjusted.
Reply to mainsr
ErikBFlom
Apparently back in 1965 teams were not doing everything to win because they took a half-hour less to play the game. If they had been serious about winning, they would have taken more time.

Or so we would believe from the current players.
Reply to ErikBFlom
mainsr
Wouldn't it be more the case that back in 1965 teams were not doing everything to drive revenues because if they had been serious about revenue maximization, they would have had more commercials between innings and during pitching changes?
Reply to mainsr
mhmckay
What stands out in the comparison is the near doubling of relief pitcher usage. I'm guessing the % difference on "in inning" changes is even larger. The Ueberroth driven ad increase added about 12 minutes to the average game. The rest seems pretty simply a) more pitching changes b) more pitches per AB (that would have been useful to include in your chart too). If you are going to address root cause, seems like it's pretty clear where to focus.
Reply to mhmckay
mainsr
Pitches per plate appearances, unfortunately, aren't available that long ago.

Grant Brisbee did a wonderful analysis earlier this year of the difference in game length between 1984 and now (see below for link) and he found the largest difference was simply the time between pitches. That being said, I think it's pretty safe to say that the time between innings to accommodate commercials is the biggest change since '65, in that televised games were still pretty uncommon back then.

Reply to mainsr
collins
Mickey Lolich actually won 217 games and pitched 3638 innings.
Reply to collins
mainsr
Ah. I forgot the word "additional." I'll get that fixed. Thanks John!
Reply to mainsr
mattgold
How did Vic Davalillo get to Angels in 1965? My sources show him as playing for the Indians, and being traded to the Angels in 1968.
Reply to mattgold
mainsr
Well, obviously, my fingers went rogue, typing the wrong team nickname beginning with vowel.

The reason I checked on this was that Davalillo's results were so extreme. FanGraphs gives him 3.5 WAR in 1965. And he never came close to 25.3 FRAA in any other season of his long career. So did he simply have a great fielding season in 1965, albeit in a manner that was not captured in other retrospective fielding measures, or does this result tell us more about FRAA calculation than it does about Davalillo?
Reply to mattgold
mainsr
Three answers.

First, yes, the usual reason for large divergences among the three WAR measures is fielding. The delta can be particularly large when you're talking about outfielders, like Davalillo. In the IF, a missed play is usually going to be a single. In the OF, it's often extra bases, with the attendant higher run values. So it's not unusual to see a few made or missed plays yield pretty large swings, regardless of fielding metric. By DRS, for example, Shane Victorino was +23 in 1,021 OF innings in 2013; he was a combined +3 in 5,098 OF innings over the prior *four seasons* combined. One year can yield fluky results, especially in the OF.

Second, I don't know what fWAR and bWAR use for their fielding metric in the pre-DRS/UZR era. FRAA, as you probably know, goes back to 1950.

Third, in Davalillo's case, there is a significant playing time issue. He had a big year in 1965, starting in center in the All-Star Game, but he was mostly a part-timer after that, qualifying for the batting title only one more time in his career even though he saw action through 1980. That obviously affects counting stats.
Reply to mainsr