Recently, I was having a conversation with a coach from a successful collegiate program when a profound concept—an explanation really—hit me. Like most realizations, it was the brutal simplicity of it that made it so useful and resonant. The concept was simply “sliders work because they look like fastballs."

The obvious and correct response to that is “no shit." Harry Pavlidis often reminds me that our job as analysts—especially those of us who focus on defining, improving, and creating baseball statistics—is to “quantify things that the players already know." This would be a textbook example of Pavlidis’ Precept™.

We’re blessed to have been living with PITCHf/x-type data for a decade, a true revolution in the data we have at our fingertips with which to understand the game. Yet I often feel as though this windfall of data has in some ways spoiled us. In many ways it has conditioned us to become so exceptionally focused on individual pitch performance, rather than looking at each individual pitch as a greater part of the whole. The slider—the concept of the pitch itself—is a perfect example of that.

Sliders are, for all intents and purposes, unimpressive pitches. The major-league average slider has roughly 75 percent gyro spin, meaning that the average slider doesn’t really move a whole lot more than a theoretical spin-less pitch[i]. Compared to that theoretical spin-less pitch, the average major-league slider moves just 2.2 inches in the horizontal plane, and 1.8 inches in the vertical plane.

Not all sliders boast such meager movement, of course—Yu Darvish’s slider moves more than nine inches on the horizontal plane. Still, for many pitchers the slider is an unimpressive pitch. So why does the average slider have a whiff rate of 34 percent? Why do sliders have a swinging strike rate of more than 16 percent, when the major-league average for all pitches is just over 10 percent?

The average major-league fastball[ii] comes in at 92.5 mph, versus 84.7 mph for sliders—a 7.8 mph difference. The average fastball moves -5.1 inches (arm-side) compared to the sliders' 2.2 inches—a 7.3-inch difference. Fastballs move quite a bit in the vertical plane as well, a function of their often significant backspin. An average fastball moves 9.2 inches in the vertical plane compared to just 1.8 inches for the slider—a 7.4-inch difference.

Of course, movement differential is pointless if hitters can easily tell the pitches apart.

Since 2007, major-league pitchers have thrown 95 distinct pitch pairings. Some happened just twice in the past 10 seasons (e.g., a splitter followed by a screwball) and some have happened as many as 944,452 times (a four-seam fastball followed by another four-seam fastball). Relevant to this conversation, sliders take a starring role in the most common pitch pairings. Below are the five most common pitch pairs thrown since 2007:

It's important to add some context to the movement of a slider as well. Often analysis is done using short-form movement[iii]. Using long-form movement—data that includes the effect of gravity—provides a nice contrast between sliders and the “other” common breaking ball: curveballs. Take a look at Clayton Kershaw’s movement plot from this season: 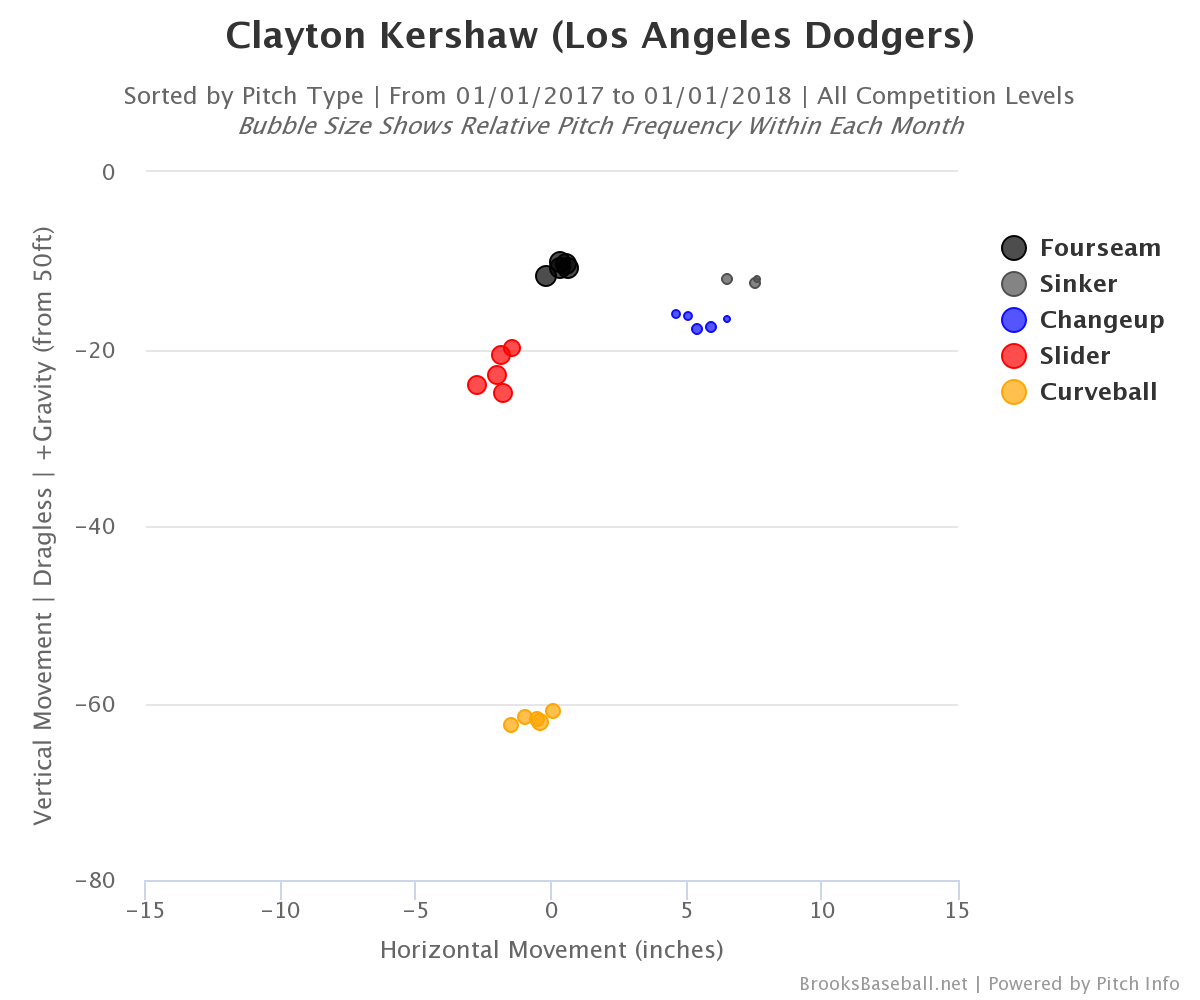 You can clearly see that Kershaw’s slider (in red) is very close to that of his fastball. Including the effect of gravity, Kershaw’s fastball drops about 11 inches, while his slider drops roughly 23 inches. That seems like a massive difference, but consider it in comparison to his curveball, which drops nearly 62 inches. For Kershaw, the slider is an effective tool because it is different enough from his fastball, but not so different that it’s obvious to the hitter.

This effect can be even more pronounced if a pitcher manipulates his slider, blurring the line between a cut fastball and a slider. Baltimore right-hander Dylan Bundy does this to great effect, as Orioles manager Buck Showalter hints in a recent quote[iv]:

The ability to manipulate the slider to make it more or less like a fastball gives the pitcher a valuable tool for any situation he might face while on the mound.

Now that we’ve established how similar these pitches can be, let's take a look at how pitchers utilize the fastball-slider combination in the wild. This first example is from Indians right-hander Carlos Carrasco, courtesy of Rob Friedman[v].

Let’s dissect this a bit. Carrasco uses an 84 mph “get me over” slider to get ahead in the count. Twins switch-hitter Eduardo Escobar obviously wasn’t looking slider, and decides to live for another day and take the strike. Carrasco comes back with a 96 mph fastball, high and away, which gets Escobar to chase for strike two. This swinging strike then sets up the third pitch in the at-bat.

To close the at-bat, Carrasco comes back with a “backdoor” slider, which works out of the same tunnel as the fastball. You can see Escobar gearing up before thinking to himself, “You’re not going to get me to chase a fastball out of the zone again!” And then the slider breaks back to the outside corner for the called third strike.

Carrasco uses his slider in multiple ways during this at-bat. It’s a surprise on the first pitch to steal a strike. He then uses his fastball to set up the back-door slider, a pitch the batter gave up on before it worked back into the strike zone.

This effect works backwards, just as well as it does forwards. Take this two-pitch sequence from Tigers right-hander Michael Fulmer, for example:

Here Fulmer gets Yankees slugger Aaron Judge to chase a slider that starts on the outside corner but moves its way out of the zone. The fastball follows, with Fulmer starting the pitch in a similar location to the previous one. Judge, hoping to not be fooled again decides not to offer on the pitch, helplessly watching it work its way back to the outside corner for strike three.

Of course, we didn’t go over the swinging strike prowess of the slider to simply watch batters get fooled for called strikes. The beauty of the slider is its ability to instill a false sense of confidence in hitters. A good slider can lull a hitter into taking a Ruthian hack, only to come up with nothing but air as the ball rips through the zone and ends up several inches away from their bat. Take a look this example from the late, great Jose Fernandez:

That isn’t to say that the only way a whiff occurs on a slider is when the hitter is attempting to launch a fastball out of the stadium. Sometimes the batter is simply trying to not look stupid (success on this approach varies):

Yankees right-hander Luis Severino starts journeyman outfielder Alex Presley with a 99 mph fastball, down and in, which Presley weakly fouls off. In his defense, that five-ounce projectile was traveling in excess of 90 mph by the time it passed just inches from Presley’s kneecaps. Severino rudely followed up that pitch with a slider in the same spot that dove in toward Presley’s ankles, albeit much too late for Presley to wisely hold off on his protection swing.

The pitch tunnels data that we introduced in January allows us to quantify the separation between pitches and how difficult it is for hitters to tell them apart. We know that this concept isn’t new, of course, it’s simply an application of Pavlidis’ Precept. Here’s a GIF from 2015, showing how similar Pirates right-hander Gerrit Cole’s fastball and slider look in a Buster Posey plate appearance:

That GIF is pulled from a longer video on MLB Network that breaks down the two pitches and how similar they really are. While the MLB Network crew didn’t explicitly use the term “pitch tunnels,” they may as well have. Here at Baseball Prospectus we’re trying to help better explain the game of baseball by exploring things that have an impact on the game. Much like catcher framing, the concept of pitch tunnels has been around for a long time in the game, we’re just putting a fancy wrapper around it.

Sliders just so happen to be one of the best prisms through which to consider the phenomenon.

Special thanks to Rob Friedman and Harry Pavlidis for their assistance in compiling the video and data for this post.

[i] Or, more accurately, than a pitch that incurs no spin-induced movement. We’re not talking about knuckleballs here.

[iii] Like we did in the earlier paragraph describing the horizontal and vertical movement of the slider.

[iv] Thanks to Rob Friedman for finding the Showalter quote.

[v] Rob is one of the best follows on Twitter. If you aren’t already, I highly recommend you give him a follow at @pitchingninja.

Reply to ceadie
hyprvypr
I thought one of the lasting challenges to throwing the slider was arm injuries - in particular forearm and/or injuries to the ligaments that require TJ surgery eventually.

I've read articles that suggested the data and correlation was so strong that many pitchers tried to use their slider only at need to minimize that wear and tear.

Clearly with some players, Chris Sale comes to mind, the expanded usage of this pitch hasn't caused that stress or injury(yet) but it is interesting to consider.

Another thing it seems is that relievers coming up to the pros have such a high bar to succeed that it seemed commonplace for these guys to 'air it out' even if it's for a few years to be highly successful, even if it eventually lead to injury. Most of us would gladly suffer an arm injury to make several million dollars - the difference between a AAA journeyman and major league setup man might be a 2-3 year run of 15+ K's/9 and a filthy slider used a LOT.
Reply to hyprvypr