The youngest pitcher consistently taking his turns in a starting rotation this year is named German Marquez. Transplanted from the slow-moving Rays organization to the arm-desperate Rockies in the Corey Dickerson deal and quickly tasked with the challenge of, you know, pitching for the Rockies, Marquez has more than survived thus far. At age 22.

Only three younger pitchers have started a major-league game at all in 2017, and none of them have made more than five starts. In this context, his performance (again, for the Rockies) is an unlikely and unqualified triumph. His 22.8 percent strikeout rate is solidly above average for a starter, he has flashed brilliance and chewed through innings without the implosions or erratic outings that might be expected given his youth. He has arguably—depending on your metric of choice—been the Rockies’ best pitcher.

The way he’s done it is interesting, to boot: No one with 80 or more innings has a higher Called Strike Probability—BP’s control metric that tracks how often pitches would likely be called strikes. This is a stratosphere typically occupied by those who must limit walks and induce contact to survive or those whose all-caps STUFF allows for some wiggle room on the whole command thing. If Marquez is attempting to join the more exciting latter category, he’s not doing half bad so far.

The thing is, his place atop that leaderboard—like his presence in the majors—might be tied up in the circumstances of his existence in Colorado. Teammate (and second-youngest rotation regular) Antonio Senzatela is right behind him in CS Prob, and another Rockies rookie, Jeff Hoffman, ranks 13th. Except this does not appear to be a case of strategy so much as necessity. The club’s two most frequent backstops rank among 2017’s six most detrimental pitch framers. As a midseason supplement, the club went out and acquired Jonathan Lucroy—who, despite prior greatness as a framer, has been 2017’s single costliest receiver.

If the story of this season’s Rockies concludes just short of the promised land, most eyes will be drawn to the no-name rotation. But, as sociology would caution us when we look upon the not quites of the wider world, the blame shouldn’t fall totally, or even mostly, on pitchers saddled with a Rockies uniform.

The two surprise somebodies of the NL West, the Rockies and the Diamondbacks, might have perceived a similar problem with their clubs in the offseason. Their run prevention machines allowed about 32 percent of balls in play to turn into hits in 2016, and their ballparks encouraged homers. While this aided their lineups, it created major problems for their pitchers that had to be worked around if contention was in the cards. Their solutions, as implemented, have diverged wildly.

Why? Well, it’s hard to get past the catchers. A change behind the plate in Arizona—in which elite receiver Jeff Mathis replaced very-not-elite framer Welington Castillo—has allowed Zack Greinke to resume living on the edge, and it seems to have helped Patrick Corbin and Taijuan Walker find more wiggle room, as well. (We also must note here that by projection, pedigree, aging curve, whatever, the D-backs just have a better roster of pitchers at the moment, so in terms of basic results they had a leg up to begin with.)

If you were building a plan for dealing with an environment where contact is especially likely to be bad for pitchers, it would look like Arizona’s zone-avoidance scheme. So it’s odd that Colorado’s starters went the opposite way, throwing in the zone far more than they used to, more than all but four other clubs in 2017, in fact. Those teams (Royals, Mets, Giants, Tigers) play in the most pitcher-friendly environs in the majors. The Rockies, as you may have heard, do not.

What Marquez and Senzatela and the other young Rockies are doing is (probably) something like an on-the-fly backup plan. See, the Rockies likely thought they were entering the season with a good framer as their primary catcher. Tony Wolters, a converted infielder, ranked highly in 2016. Tom Murphy didn’t look bad.

Then Murphy got hurt, the old-and-bad multiplier combo of Ryan Hanigan and Dustin Garneau filled in, and even worse, Wolters fell off a cliff in the framing department. His agent’s version of this inquiry wonders whether these rookie pitchers are so bad at hitting their spots that they have tanked Wolters’ numbers. And maybe in some cases, his agent would have a point. 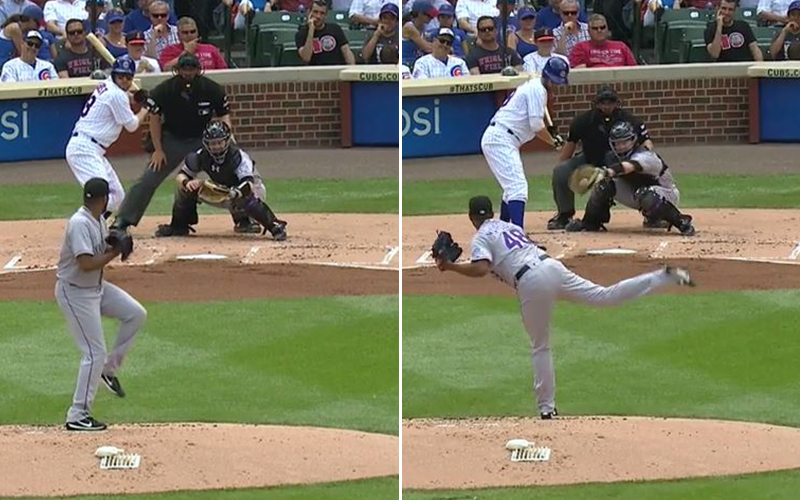 That’s the nature of these things. Some of those should-be strikes are lost because Marquez missed his target. Others are good pitches lost to the stabby motion of a catcher’s elbow. 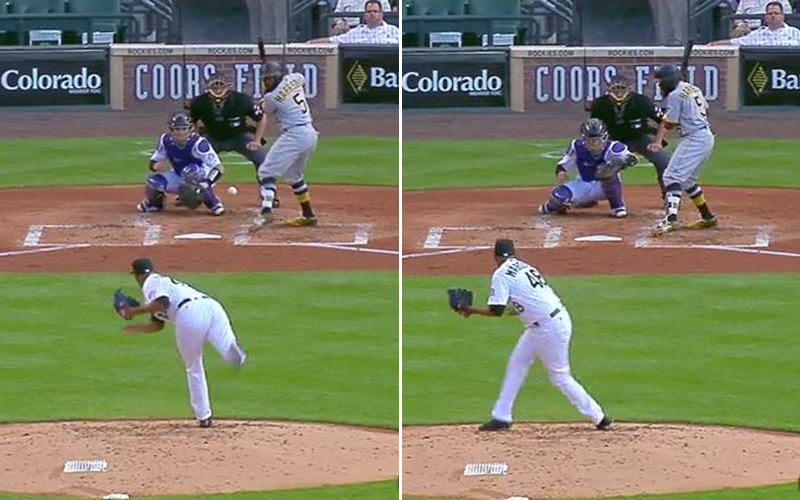 Or to poor positioning and reaction time and God knows what else that led to this pitch (yes, pitch #5 on the little diagram below) being not a 98 mph, knee-buckling out pitch, but ball three. 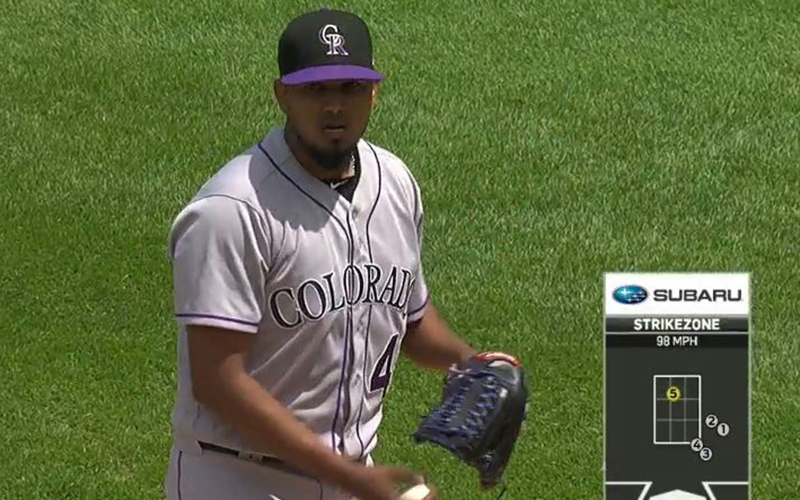 It’s not how we want to think about things, but: Even accounting for the nebulous but negative effects of altitude and Coors Field, these Rockies pitchers have lower ceilings this season not because of anything they did, but because of the men in the masks with the big leather mitts.

Take Corbin. You could look at Corbin—Arizona’s third or fourth starter—and say, that guy would be the Rockies’ ace. You could also go full thinking-face-emoji on his bounce-back 2017, and wonder whether Colorado Corbin would actually be better than Marquez.

The point of throwing strikes, aside from demonstrating the most basic ability to throw the ball in the correct direction, is to get ahead in the count and reap the benefits. Changing the proportion of plate appearances that start out 0-1 can dramatically alter a pitcher’s performance. BP’s Russell A. Carleton has suggested that pitch framing matters more early in the count, and it’s here we can see the varying levels of resistance Corbin and Marquez face.

This season, Marquez—noted strike-thrower—has taken an above average 50.9 percent of the batters he’s faced to an 0-1 count, while Corbin has gone there with a very good 52 percent of his. Last season, Corbin ranked dead last among pitchers with 80 or more innings, and the year before that he ranked 126th out of 160.

The catcher change in Arizona may be paying even more serious dividends for Corbin than we can properly account for. His CSAA—BP’s metric for command—ranks among the top dozen starters after ranking among the worst dozen in 2015 and below average in 2016. Now, the metrics dole out credit to both pitcher and catcher, and would seem to indicate that Corbin has improved significantly on top of gaining the help of more capable battery mates.

But the psychology of it all can’t be removed from the pitcher’s circumstances. Aiming for that low-outside corner just has to be less stressful after missing outside a few times and getting strikes anyway. Marquez is dealing with the opposite experience. He’s firing through the fear and into the rulebook zone. And he’s getting 1-0 counts out of it more often than he deserves.

Using Baseball Savant’s detailed zones to examine Marquez’s borderline first pitches (only takes, of course), and you’ll find that he is getting called strikes less often than all but three others with 100 such pitches. 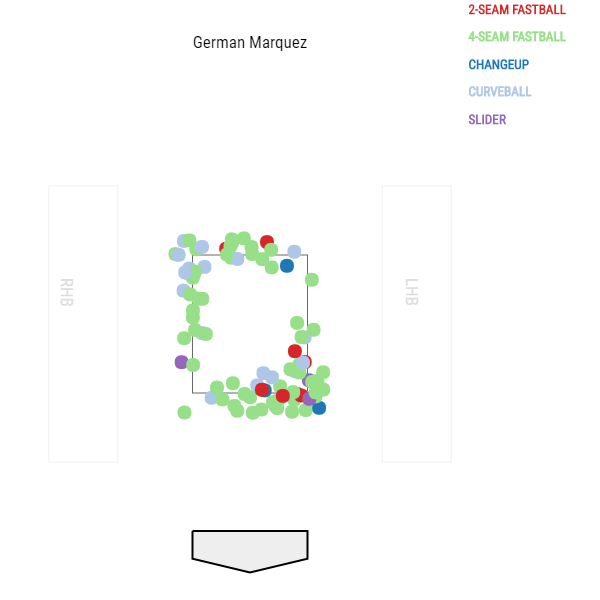 Those are all ball one.

How much differently? Marquez strikes out 31.4 percent of the hitters he takes to 0-1 counts, and walks only three percent of them. Fewer than 30 starters can match that differential. After 1-0 counts, his strikeout and walk numbers aren’t bad relative to others in the split, but he’s pushing an even heavier boulder up an already steep hill. Given that borderline calls are unlikely, he’s more likely to resort to the nitro-zone strike, so his HR/9 spikes to 1.9 after 1-0. His rotation-mates often fare even worse.

This is a question the entire Diamondbacks rotation has seemingly spent a gleeful six months answering. The juxtaposition paints the Rockies as tragic characters. They are fighting for their Wild Card lives, and even a victory would likely earn them a date with Greinke. Still, there’s a certain amount of optimism to be found in the adaptability of a rotation chock full of youth. There is still a big, honking barrier to greatness, but at least this one is actionable.

You need to be logged in to comment. Login or Subscribe
muelldawg
Very well done article as it gave me some insight to these match ups. Thanks
Reply to muelldawg