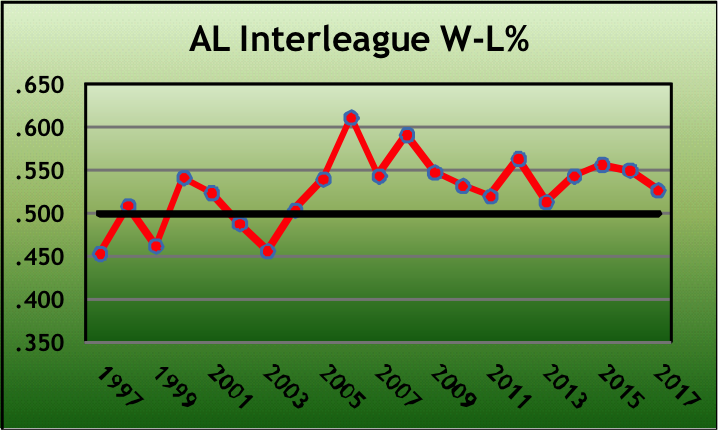 Interleague play, though, is controversial. It muddles the two leagues in the one American sport in which the two leagues were truly separate entities. The DH conundrum creates the spectacle of pitchers who may have never batted in their professional careers being called upon to hit. It takes away games that teams play with teams in their own league and division. It makes travel schedules ever more complex. And interleague games are unbalanced. This creates an advantage for some teams relative to others. The imbalance comes from two sources.

First, there are the games against teams' designated divisional opponents. Every year, teams in a given division play teams in another division in the other league. For example, this year the National League West teams play the American League Central teams. Here’s how that will play out for the NL West clubs:

Granted, that doesn’t create a competitive advantage for a bad San Francisco team, but Colorado is in a fight for the second Wild Card. Being one of only two National League teams to have to play four games against Cleveland (more on that later) and playing six road games against competitive Twins and Royals clubs makes their path harder than several other teams. Not a lot harder, but one game can make a difference.

And the same goes for the AL Central. The Twins play four games against a weak Padres team and get the competitive Rockies and Diamondbacks at Target Field. Playing against the stars-and-scrubs NL West, that’s a pretty favorable lineup.

What’s the solution? There isn’t one. You can’t make interleague games balanced in terms of both opponents and home/road split without completely breaking down the league barriers.

Second, there’s the issue of “natural rivals.” Each team plays its natural rival in the other league four times, two games at home and two on the road. There are two groups of natural rivals. Some of them make sense, Some, well …

Some of those rivalries are more contrived than others, but OK, I see the logic. But that doesn’t make them fair. The Brewers, trailing the Cubs by 3.5 games in the National League Central after Tuesday’s games, drew a much tougher natural rival this year. The Yankees are battling for both a divisional crown and the Wild Card, and they got to beat up on a weak Mets team.

I get Braves-Blue Jays, since it’s a perpetual rematch of the 1992 World Series. But Pirates-Tigers? Because the hard feelings over the 1909 Honus Wagner/Ty Cobb World Series have never died? Phillies-Red Sox, commemorating all the years they were the worst teams in their leagues? Do the Rockies play the Mariners and Diamondbacks play the Astros to celebrate their shared legacies as expansion teams?

Irrationality aside, playing Colorado is tougher for the Wild Card-contending Mariners than the Rangers’ four games against the Padres. And while I noted above that the Yankees got an easy draw against the Mets, the Red Sox got an easier one.

Granted, not all of these series have gone as they’d appear on paper. The Yankees swept the Mets, but the Red Sox were “only” 3-1 against the Phillies. The Mariners did as well against the Rockies as the Rangers did against the Padres. Colorado took three of four from Cleveland. But Milwaukee got swept by the Twins, and the Twins’ 11-7 interleague record to date is three games better than that of the Angels, who were just half a game ahead of Minnesota for the second Wild Card as of Wednesday morning.

In short, the American League is going to win the interleague series, indicating its continuing superiority, though that superiority appears to be fading. That aside, interleague play remains imbalanced, and as such, creates scheduling advantages for some teams and disadvantages for others. After 20 years, we should get used to it. It’s not going away.

*By the time you read this, it’ll still be five (if Atlanta won last night’s game against Texas) or three (if Texas won). And yes, I know that an odd-numbered magic number is impossible in interleague play, where every win is matched by a loss. But it’s technically correct.

You need to be logged in to comment. Login or Subscribe
newsense
There should be some room for rotation among "natural rivals". The Braves and Red Sox have a Boston connection. You could also tie the Brewers to Seattle.
Reply to newsense
mainsr
Without actually looking back at it, I'm pretty sure they were natural rivals at one point. I know that Houston moving the AL messed things up.

Brewers-Seattle. I like it, newsense.
Reply to mainsr
jfranco77
The Pirates are problematic. Who is their natural rival? The Orioles, maybe? Regionally close and the 71 and 79 World Serieses? The Indians, closest geographically but never really much of a rival? I think that's why they just get stuck with Detroit.
Reply to jfranco77
mainsr
You raise a good point as usual, jfranco77. The teams that don't have a geographic natural rival really don't have one. I mean, it's been 25 years since Toronto and Atlanta played in the Series, and that's probably the *best* non-geographic natural rival.

As a nominal Pirates fan, the biggest advantage to me of the PIT-DET rivalry is being able to listen to the Detroit radio crew--they're really good!--on SiriusXM and mlb.tv. (The O's would be a good choice but there is legitimate bad blood, at the corporate level, between those teams, in addition to the geographical proximity. Wouldn't want to take that away!)
Reply to mainsr
greenengineer
Two thoughts:
1) They should pick a year where they use DH based on the visiting team. That way home town fans see something different, and it might neutralize the home team advantage.

2) 20 years later, I still hate it.
Reply to greenengineer
mainsr
1) That'd be an interesting twist.
2) I don't know that I did a particularly good job of hiding that I agree. I might say dislike instead of hate, but yeah.