Baseball transactions are business moves, with the clinical vocabulary to match. Like all business moves, this doesn’t stop them from being very personal—most intensely and intimately and literally for the actual people involved, more abstractly for those involved only insofar as they are paying attention—and being dressed in a very personal vocabulary. These moves are generally not so often talked about in terms of what they are, but rather in terms of what they feel like. And so the business transaction gets discussed in the language of betrayal or intimacy or whatever else.

The following glossary has the opposite intention. These, instead, are personal transactions discussed in those business terms.

out of options: “It’s not that I don’t love you anymore, it isn’t that, I promise, it’s just—it’s just been so much back-and-forth, you know? And some of these breaks made so much sense at the time, I know, and you can keep saying that there’s a difference between breaking up and taking a break, but does it really make a difference at this point? It’s always the same, it’s felt the same every time, no matter why we get back together—if we’re doing it for any reason other than because you’re ready, then it’s not going to work, you know? And I’m not saying you’re not ready for anyone, just that you’re not ready for what I need right now, and don’t you just want to find a different choice here, anyway?”

“No, of course not, I’m not breaking up with you,” he says, resting the phone between his ear and his shoulder for a moment so he can swing his arms out and up to stretch. “C’mon. You know I wouldn’t do that. Just—if you wanted to try dating other people, you should go ahead. Or we can just take a little break. Or maybe we should break up, I don’t know, you’re the one that brought that up. Is that what you want?”

ten-and-five rights: There are already hot, furious tears springing up in the corners of her eyes; she hates that she still cries so quickly when she’s angry, and she hates that after all this time, he still doesn’t seem to understand that she’s a mad crier and not just a sad one. Now he’s reaching out to stroke her shoulder, all soothing and paternalistic, and she snaps away rigid and tense. For a moment, it pierces her so awfully that she is sure she will bubble over; how stupid for him to assume that she can only be sad that he is leaving rather than furious at the simple fact that he thinks he can leave like this at all.

But instead she runs her clasps her hands together, smiles tightly, says in a way that is too measured and clipped to feel remotely real, “But surely I deserve a little more say here—after all these years?”

placed on unconditional release waivers: The door slams and the lock clicks—cool and metallic—and he is strung tight and anxious and dry, waiting to hear the little bedroom window flung open and see everything he owns come sailing out of it. He waits. Nothing ever comes.

While the college I attended didn’t have one, “Last Chance Dances” are a tradition that dates over a decade, starting at Yale before filtering down to other, non-Yale institutions. The idea is simple: on the eve of college graduation, before having to submit to a lifetime of desk jobs and insurance claims and tax forms and the other impossibly dull ephemera of adulthood, seniors get one last shot at wooing the unmatriculated love that has eluded them the past four years. It’s an impossibly romantic idea, the kind that only can draw breath in a school environment, and a romantically impossible one, at that.

Similarly, as the regular season winds down, major leaguers are looking to make their last chances count. Catching fire with a string of extra base hits can be a winged chariot to guide a player into the off-season; a handful of quality starts will burn brightly enough, in a down year for pitching, to cast a shadow at the winter meetings. The highlight-reel play feels more important now than ever; even teams who are out of the race want to end on a good note.

So when Mikie Mahtook saw this Jose Ramirez home run scraping towards the fence in Sunday’s Indians-Tigers game, what he saw was an opportunity for bravery: 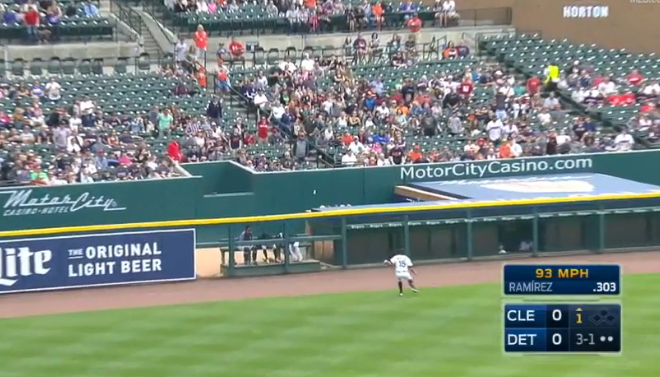 The ball took a funky hop off the yellow stripe. Committed to the play, Mikie Mahtook had less than a second to look at this ball, judge where it might carom, and hurtle his body into the direction of the unknown. Shoot your shot, Mikie. 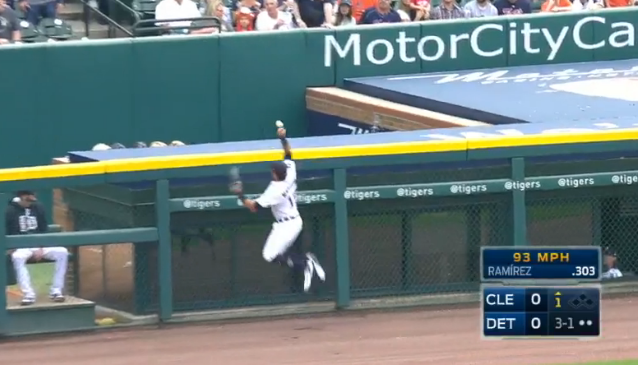 Life will often present these choice moments to us: an opportunity to act, or to stay still. Time is running out, cautions the advertisement. You must change your life, warns the poet. Another smirks: Fortune favors the bold. We see others getting ahead. We know that to keep up, we must act audaciously, maybe recklessly. So he leaps! It is not an ugly play to look at. Mahtook is a professional athlete, after all, and this jump is athletic, balletic, basketball-like. Or…volleyball-like.

Trying and failing is so much better than not trying, though, even if it makes you look momentarily silly, and then that silliness is captured in .gif form and distributed across the internet. Nothing of value comes without some degree of risk, so when the opportunity arises, seize it. You never know when it will be your last chance.