The collection has been housed in a leather valise, harder than glove-leather, dry with age, the colors of infield dirt before and after the dampening spray. It looks like it’s going somewhere, waiting for its steamer-trunk sticker. The rusting clasp features a small lock, though key and case have long parted ways. Under the flipped lid, an imbroglio of cardboard and plastic—cards and sleeves tumbled loose, some correctly paired, everything shaken free of even the suggestion of stacks. Here and there, snap-closure plastic cases separate fifteen or twenty cards from the rest: whole or partial sets of things, or maybe the lone pack of a certain brand or special release. 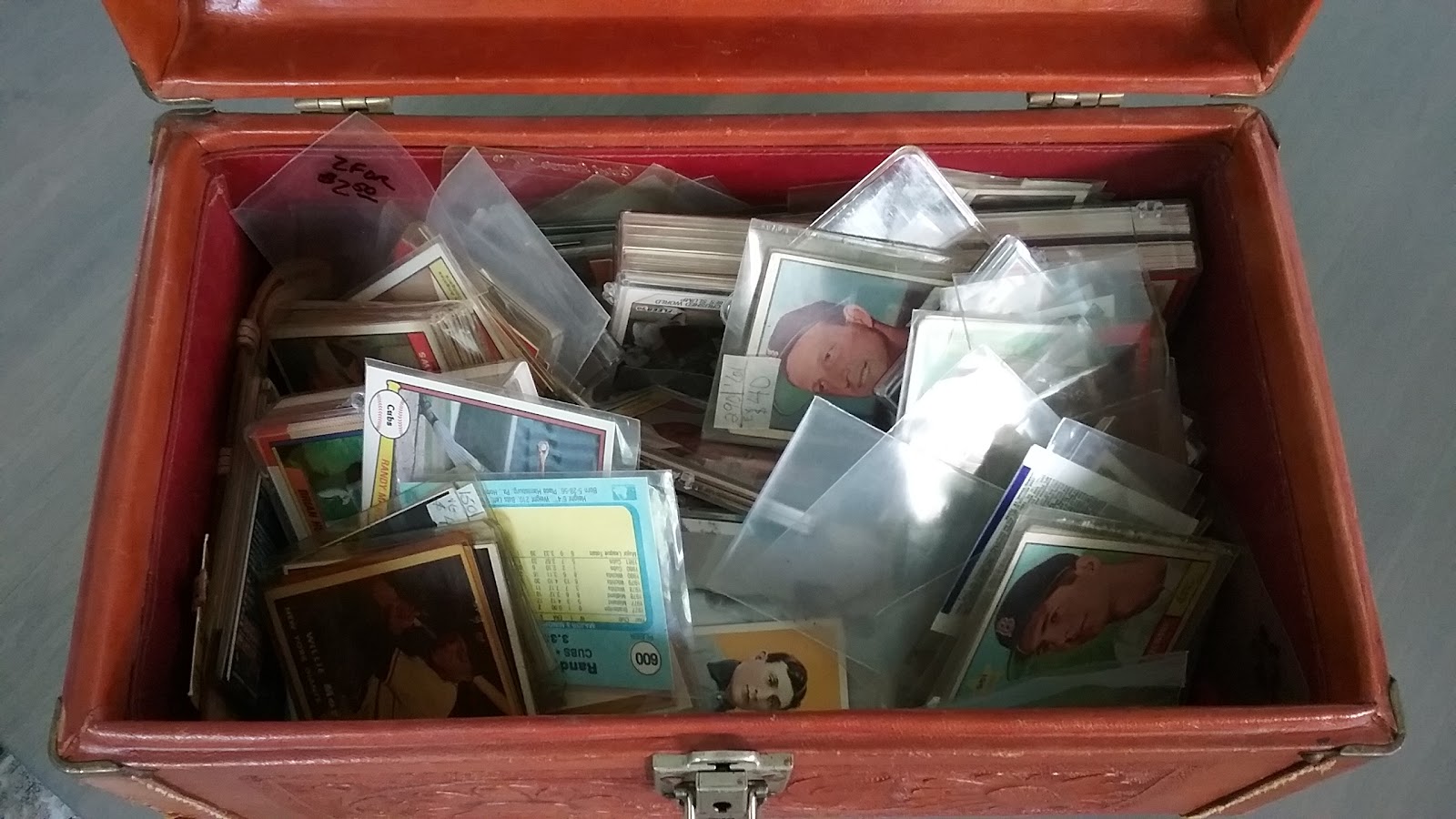 The empty sleeves distract, and the first thing I do is pull them out. Without someone’s face between their translucent skins, the soft ones look like trash, like cigarette-box wrappers. The rigid ones tinge yellow, age and maybe smoke getting the better of them. I wouldn’t want to put new cards in them, or anything I think has value.

I wish value wasn’t the first thing I thought about when I lifted the lid, but that’s what baseball cards seemed to mean most in the 1990s. That’s why my brother collected them, going to shows and crowded road-side shops and that one table at the weekly farmers’ market, and why he bought those hefty newsprint guides that told you what you—your collection—was worth.

The decade seemed to be full of people celebrating or lamenting found and lost cards—here the joy of a childhood trove unearthed from thirty years before, rich and ripe with DiMaggios and Williamses and maybe cards older, better, rarer; there the collective agony of “My mom threw them away when she cleaned the attic.” Or the clarity knowledge brings: my dad told stories of how they played with their cards, carrying them everywhere, threading them through their bike-tire spokes to show them off and to enjoy the sounds they made straining against pedaled wind.

The collection boom loomed especially large in those years. The comic book industry ran rampant with it—variant covers, foil covers, re-numberings, and special editions—and the practice of buying one copy to read and one copy to never, ever touch trickled even into my little cows-and-coal school district, a place where it was impossible for many of the kids to even get the cable television stations showing the cartoon series that spawned some of those comics. It was equally difficult to actually watch televised baseball there. Baseball cards were one way to learn the faces of the people who showed up in newspaper box scores, to feel connected to a smirk, a stance, the pitch of the eyes. There were magazines, too, and some people could go to games, but for those of us in the middle of nowhere with no checkbooks of our own, stripping away the crinkling wrapping on a new pack of cards brought us as close to the players as we’d ever been.

There were people we knew—knew of—on baseball cards, too. Inside this leather case, there are six cards of pitcher Randy Martz, who spent three of his four seasons with the Cubs. On the outside of one of the card-sleeves, there’s a hand-written masking tape label indicating the card’s twenty-five cent price and a note: “Went to Upper Dauphin.” 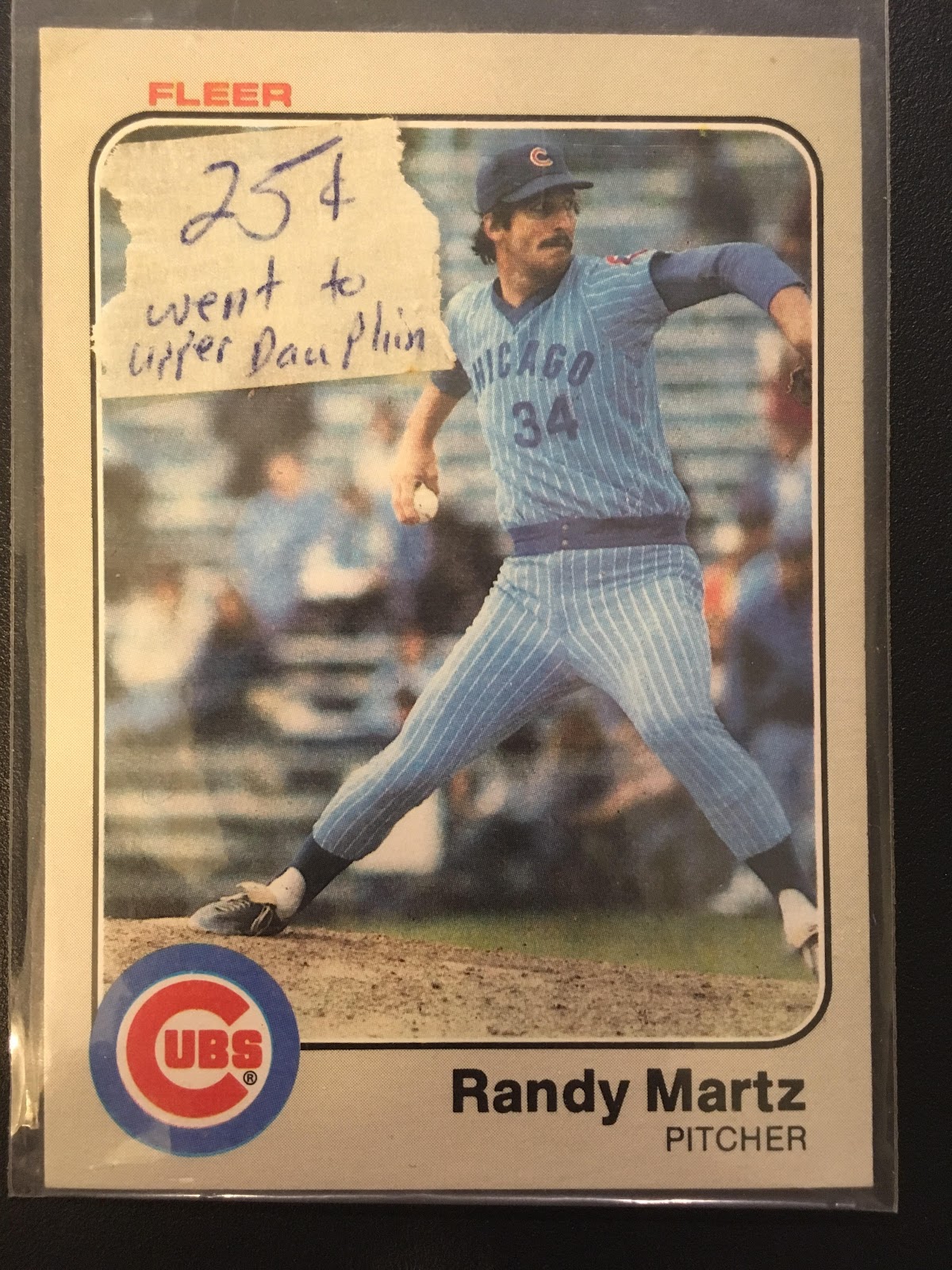 I don’t know whose handwriting that is, whether the card is marked because it was bought that way or because someone tried to sell it. But Upper Dauphin is the next school district over from home, and Brad Hassinger, who graduated from there, too, came to talk to my fifth grade class. Before the 1993 season started, Hassinger had pitched for High-A Clearwater, and he would peak in Double-A the following year. Somewhere in my parents’ house is a little stack of white notebook paper squares, paper-clipped together, all bearing his signature because he was drafted by the Phillies. Ten-year-old me thought it would be important to have them. 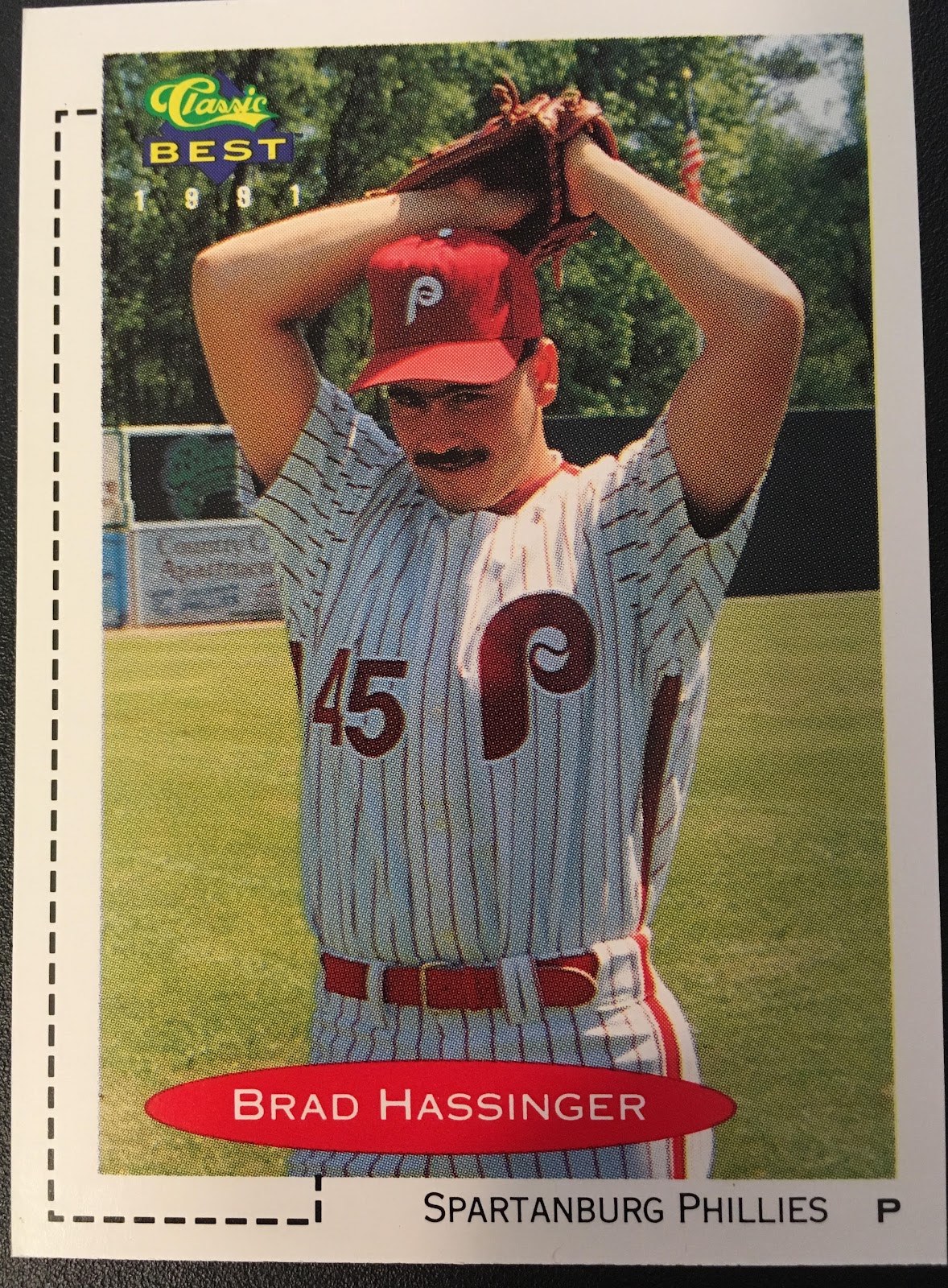 Part of aging is learning where one was right, where one was wrong. I was right to keep all of my old softball mitts, wrong to sell back my college geology textbook. And until I wrote the previous paragraph, I would have said I was wrong to have kept that ridiculous pile of signatures—not even on cards, not even in an autograph book, but on two-by-four-inch slips of cheap wide-rule—but I’m glad now to have done it, glad now for its remembering, and that the memory is all mine. The collecting of cards was never really my own.

Maybe it was because my luck was bad—I don’t remember ever plucking anything good from a pack’s shallow sea—but I didn’t have any passion for it. Cards’ stats-printed backs didn’t take long enough to read, didn’t tell me enough of the story, and I wasn’t allowed to make anything out of them. What if Rockies rookie pitcher Mo Sanford got good in a few years? One never knew. The cautious uncertainty was part of the appeal of it: the collectors who were careful, the ones who cased and bindered their cards against dust and bent corners, might find themselves good fortune. I wanted to carry them around, make them team-colored borders and frames and hang them in my locker. It wasn’t like slapping them on a bicycle, but at the time, it might as well have been.

So I picked books instead, borrowing without asking the baseball biographies on my dad’s shelves: the lives of Hank Aaron and Bob Feller and Jackie Robinson and Sandy Koufax. In sixth grade, I was reading I Had a Hammer: The Hank Aaron Story, and I read the things people said to Aaron, the death threats he received. It was the first time I’d encountered the n-word in print, but I knew what it was, knew its ugliness thanks to a fifth grade teacher who taught Civil War history with due gravity and specificity and its still-live weight. I knew—as much as a white adolescent from rural Pennsylvania could know—that racism hadn’t ended after Jackie Robinson stole home.

In mid-August of this year, in 2017, white supremacists, carrying Nazi insignias, marched in Charlottesville, Virginia, and shouted, beside anti-Semitic chants, the slur that had startled me so much twenty years ago that I turned around in my middle school desk to show the boy sitting in front of me. Back then, I never asked anyone for more information about what I’d read, didn’t know who to ask and didn’t really want to know why the boy sitting in front of me had said something like, “So?”

This week, I opened this box and looked at baseball cards when I couldn’t look at the news any more, but I found the news inside, anyway: on cards with rough-rounded corners and grainy photos, the phrase “Military Service” where a string of numbers usually sat, 1943-1945. 1944-1945. When I’d first learned about Ted Williams and Joe DiMaggio leaving baseball for three years and was so sheltered by youth and geography and a culture of not talking about anything unpleasant or nuanced, it was these gaps that told me how serious that war was: the greatest hitters of their age stopped playing baseball to join the war effort, not because they were forced to go, but because they thought it that important.

No longer a child, I recognize complexities and complicities in that historical moment—the gaps on these cards all post-1941, despite what the world knew about Hitler’s Germany years earlier and America’s own anti-Semitism, not to mention its legacies of slavery and genocide on home soil. When World War II ended and baseball returned to its own status quo, baseball and America were still segregated. To be looking at these cards this week has been to remember that there is no escaping our own pasts.

Between the more venerable Stan Musials and Mickey Mantles and Roberto Clementes, there is a whole set of Bo Knows cards, featuring the eponymous Mr. Jackson in everything from hockey pads to jockey silks because, well, Bo knows all. Two ridiculous specimens from a 1991 Fleer set figure Jose Canseco and Roger Clemens in near-mythological trappings, literal lightning charging Canseco’s bat and mystic fire on Clemens’s ball; pasting Marvel’s Thor over Canseco’s face wouldn’t look out of place. There are replicas of the 1910 Honus Wagner tobacco card and the 1933 Goudey Gum Nap Lajoie card, distributed by special request to complete a 240-card set mistakenly released without card #106. Randy Johnson, Tony Gwynn, and Pedro Martinez all stand between plastic sheathing, often twinned—two of the same cards, or at least the same player, posed back-to-back. Incomplete parades of Topps and Upper Deck hopefuls scatter loose between the rest, the cards a little warped, some of them cleaving fast to each other due to humidity, a suspect glossing agent, or simply a lonesome despair in this leather coffer.

The collection isn’t mine, and I’m not keeping it. I only asked to borrow it, to look for a while, and I’ll send it back a little neater if I can. But a box isn’t like a binder; my efforts are temporary, and I keep changing my mind. I’ve piled things by date and by team, by the little price stickers still stuck to some and that I’ve resisted peeling off. Here, tonight, my only goal was to make them all of equal height, to confine the unruly empty sleeves against the edges. It’s a small effort to make sure that whoever opens the box next can clearly see what’s there, understand what this history is really worth.

You need to be logged in to comment. Login or Subscribe
ironcityguys
Tremendous article. Collecting baseball cards means something different for every kid, every generation. I really enjoyed your personal reflection. Thank you.
Reply to ironcityguys