No one expected the Twins to be good this season. Competitive? Maybe. Decent enough to create hope for the future? Definitely. But actually good? No way. Minnesota was coming off a disastrous 59-103 year. Las Vegas pegged their over/under win total at 74.5. PECOTA projected them for 78 wins, and that was the most optimistic Twins projection you could find. They started the season surprisingly well, but a very rough stretch after the All-Star break left the Twins three games below .500 and pushed their playoff odds down to a season-low 5.3 percent on July 31.

And so they became sellers, trading Jaime Garcia to the Yankees less than a week after acquiring him from the Braves, and sending All-Star closer Brandon Kintzler to the Nationals. Neither deal brought back huge value, but because Minnesota was barely clinging to the periphery of Wild Card contention there was plenty of logic in trading a pair of impending free agents for three mid-level pitching prospects. After all, no one expected the Twins to be good. Staying above .500 for the entire first half was an accomplishment in itself, and now that they’d come back down to earth the focus on 2018 and beyond could resume.

But then the craziest thing happened. Losers of 12 of their last 17 games prior to the trade deadline, and now without their lone reliable reliever and a veteran mid-rotation starter who was supposed to provide a big boost, the Twins started winning. They haven’t stopped yet. Minnesota is 20-10 since the deadline, which is good for the third-best record in baseball behind only the playoff-bound Red Sox and Indians. They’ve gone from three games below .500, with single-digit playoff odds, to leading the congested race for the second Wild Card spot, with playoff odds over 50 percent. 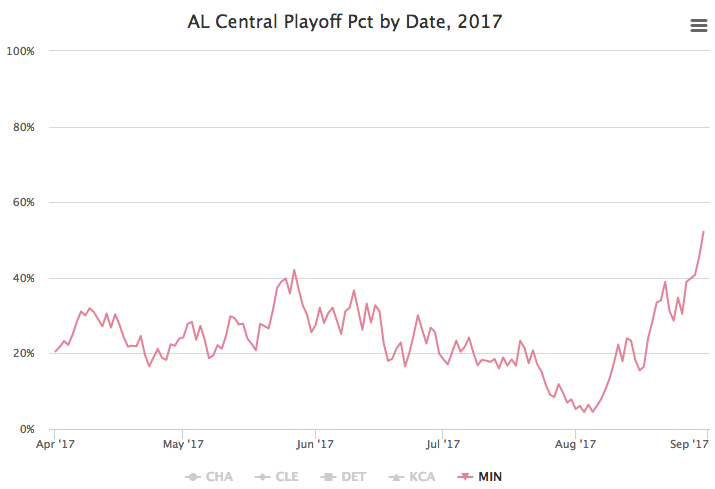 While their run differential for the season is still in the red, the Twins out-scored their opponents by 57 runs in August and have a positive run differential in the 85 games since being slaughtered at home by the Astros in a three-game series to end May. Minnesota has the league’s easiest remaining schedule, including 23 of 29 games against teams with losing records and 13 games against teams that currently reside among the bottom 10 in baseball. Those are two reasons why BP’s playoff odds like the Twins a lot more than their slim Wild Card lead might suggest.

Minnesota’s turnaround has been driven by two unexpected developments, the most shocking of which is that the Kintzler-less bullpen—owners of the league’s second-worst ERA prior to the trade deadline—has turned into a strength. Since the deadline, the Twins' bullpen leads the league in opponents’ batting average and on-base percentage while ranking among the top five in ERA, strikeout-to-walk ratio, home run rate, walk rate, and Win Probability Added. Matt Belisle, a 37-year-old with five career saves coming into the year, has converted five of six save chances in Kintzler’s absence, and the setup corps has thrived.

Their best and most-used August reliever was Trevor Hildenberger, a 26-year-old rookie who was called up in late June after four years of posting a 1.57 ERA in the minors. Hildenberger almost immediately gained Paul Molitor’s trust—perhaps even a little too much, as the manager recently turned to him six times in seven games—and logged 12 innings with a 2.19 ERA and 15/1 K/BB ratio in August while emerging as the primary setup man. Belisle took over as closer, but Hildenberger's outings in August came in equally high-leverage situations.

While a rookie has been carrying the post-Kintzler bullpen, even younger players have carried the lineup and that’s been the biggest driving force behind the turnaround. Minnesota’s lineup is the American League’s youngest and is set to become just the third lineup since 1990 to have five 25-and-under hitters (Byron Buxton, Jorge Polanco, Max Kepler, Miguel Sano, Eddie Rosario) play enough to qualify for the batting title. The others (1999 Royals, 2012 Mariners) went 64-97 and 75-87, respectively. It’s hard to be that young and not really bad.

At the deadline the lineup was below average and lacked power aside from Three True Outcomes royalty in Sano. However, in August they led the league in runs scored and ranked among the top three in AVG, OBP, SLG, homers, steals, K/BB ratio, and WPA. And of late that young lineup has done it without Sano, as the 24-year-old All-Star has been out since fouling a ball off his shin two weeks ago. Minnesota’s two best August hitters were their two youngest hitters, 23-year-olds Buxton and Polanco. Those same two were also Minnesota's two worst hitters—and two of the worst hitters in the league—from April to July.

Polanco hit .203/.239/.281 in June and went 4-for-51 (.078) in July. If not for being out of minor-league options the shortstop almost surely would have found himself demoted to Triple-A at some point during that wretched stretch. Instead he stayed on the roster because the Twins didn't have a choice, taking a seat on the bench for several short stints. Polanco hit .373/.411/.686 in August, homering six times in his last 11 games after totaling seven homers in the first 172 games of his career. Mike Trout was the only AL hitter with a higher Win Probability Added than Polanco in August, which is every bit as insane as it sounds.

Buxton started the year 4-for-49 (.082) with 24 strikeouts and finished July with an ugly .218/.292/.311 season line, extreme struggles that had a depressing number of Twins fans ready to write him off as a bust at 23. He then hit .327/.354/.619 with eight homers and eight steals in August, including a three-homer game on Sunday that led to AL Player of the Week honors. Buxton had the ninth-highest WPA among AL hitters in August, sandwiched between Nelson Cruz and Josh Donaldson, but the offense-focused stat doesn’t fully reflect the center fielder’s transformative all-around value.

Buxton has been baseball’s best defensive center fielder all season, racking up 24.0 Fielding Runs Above Average to put him on track for the second-best total by any center fielder in the past decade. He leads MLB in catches that Statcast rates as four or five stars, and is tied with Billy Hamilton for MLB’s top sprint speed. And the eye test, or at least my eye test, fully agrees. I’ve never seen a center fielder with such seemingly limitless range, and Buxton also brings a Torii Hunter-like fearlessness to chasing down anything airborne, his own well-being be damned.

Of course, Buxton has been one of the majors’ fastest and best defensive players since the moment he debuted as a 21-year-old in mid-2015. He’s refined his skills to take full advantage of his incredible speed, rising to the top of the defensive heap and becoming an amazingly efficient base-stealer. Buxton is 24-for-25 stealing bases this season, including 19 consecutive steals without being caught, and his career success rate of 87.8 percent is the third-best in baseball history among players with at least 40 attempts. He’s turned an elite-level tool into elite-level on-field performances in center field and on the bases.

The bigger story, though, is that Buxton has finally started to look like an impact hitter after mostly flailing away for his first 200 or so games in the majors. We’ve seen drool-inducing stretches from Buxton before, most notably last September when he went on a month-long homer binge. He still swings and misses too much and his plate discipline comes and goes, but Buxton and first-year hitting coach James Rowson are seeing positive results again after months of constant tinkering with his swing mechanics and approach. He’s hitting for average, he’s hitting for power, and he led all American Leaguers in WARP in August.

Buxton also leads the Twins in WARP (3.7) for the year—and ranks among the AL’s top dozen hitters—which no doubt shocks people who watched him look helpless at the plate early. Defense matters, and in Buxton’s case he needs only to contribute a little bit offensively to be an all-around star. He’s certainly done that, with a .249/.310/.401 line that, when combined with great baserunning, places him slightly below average among center fielders. What he did at the plate in August—and to a lesser but still encouraging extent, dating back a month or two before that—is enough to make it clear why Buxton was an uber-prospect.

Few players fall as low as Buxton out of the gates in April and Polanco throughout July, but the 23-year-olds did the heavy lifting for the league's best lineup in August. They got lots of help from the 25-year-old Rosario, with whom Rowson has worked wonders, and another monster second half from Brian Dozier, together carrying the Twins out of the “sellers” bin and into a Wild Card spot. Buxton has slipped into bad habits before, Rosario will forever be tempted to chase everything, and Polanco has never shown this type of pop previously, but right now the young bats look great and the Twins look … well, actually good. 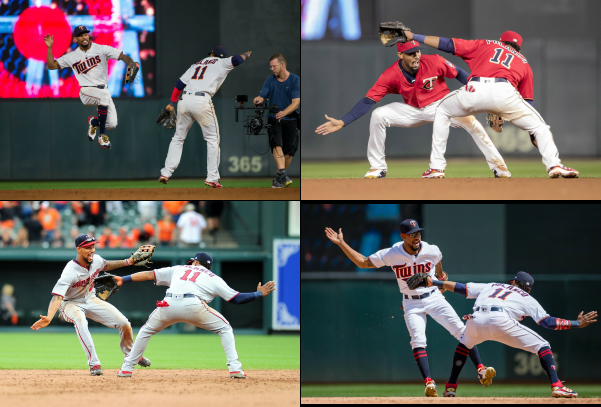 (Byron Buxton and Jorge Polanco did a lot of this in August.)

You need to be logged in to comment. Login or Subscribe
leites
Thanks for writing this, a fun read!
Reply to leites
Nacho999
It's hard not to root for the Twins with Molitor at the helm...Total overachievers...A Wildcard would be like winning the World Series in Minnesota and rightfully so...Wish them well most of the time...
Reply to Nacho999