Red Sox left-hander Drew Pomeranz has had a three-phase season. He was very bad, then better (but still not good, and certainly not efficient), and for the last two-and-a-half months he’s been very, very good. There are really no mysteries about when the phase changes occurred, so let me start by showing you the raw, results-oriented numbers Pomeranz has put up in each phase.

Of course, those look like awfully selective endpoints. You might also note that Pomeranz has seen his strikeout rate decline and his walk rate rise during the latter, otherwise-most-successful phase, and if you do you might suspect that this is a trick or that this piece is about Pomeranz being at least somewhat lucky over his recent hot streak. Neither of those things are true. Pomeranz has genuinely turned a corner this year, twice. He’s genuinely morphed, since the early spring, from a struggling and half-injured starter into a true ace, or something close to it. Here’s the full story.

Infamously, Pomeranz was battling nagging elbow soreness when the Red Sox traded for him last summer. Over the winter, he had a stem cell injection in that elbow designed to ameliorate that problem, but it lingered a little bit into the spring. Worse, he added a new problem to the mix in March, when he found his delivery out of whack—he said he was trying to keep his arm lower, and that was resulting in it dragging a bit as he rotated toward the plate—and developed a balky triceps. Between the two injury problems—neither of which turned out to be major, but each of which clearly affected him mentally and physically—Pomeranz lost touch with his natural delivery early in the season.

He lacked fluidity. He continued to leave his arm behind a bit, causing a lot of misses to the arm side, and (because he has a relatively high arm slot; that’s why he could feel when his arm was riding a bit low) getting the ball up. He gave up seven of the 15 total home runs he’s allowed this season during the six starts of Phase One. He moved into Phase Two on May 14, when he took a pretty dramatic step—from the first-base to the third-base side of the rubber. That really began the process of freeing Pomeranz. His closed stride and leaning sort of delivery no longer carried him offline; they now carried him neatly into a direct path toward his target.

Crucially, Pomeranz also revived his cutter starting in mid-May. In the six starts comprising Phase One, he threw 13 cutters—not 13 percent, but 13 total, over six outings. He had worked hard to develop that pitch in 2016, so it was odd to see him go away from it. In hindsight, though, it makes a little sense: pitchers battling potential elbow and triceps issues often shy away from a particular offering over a stretch of several starts. Whatever the reason, he’d made the cutter a non-factor early on, but during Phase Two, he threw it an average of seven or eight times per contest.

Still, things weren’t right. The cutter helped keep opponents a bit more off balance, and the change in alignment had allowed Pomeranz to hit his spots better, but the sheer stuff just wasn’t there. In his start against Detroit on June 11, Pomeranz was able to throw strikes, but the Tigers pounded him. Their expected wOBA against him that day, according to Baseball Savant, was .469, the highest it’s been for any team in a Pomeranz start this year.

Five days later, though, Pomeranz took the mound again, and it was clear that he had made the second major set of changes. His delivery was fixed. His arm stroke was much shorter, with the ball coming straight up to the space behind his ear instead of pointing back toward second base during the early stages of the movement. He was transferring his weight better, and—here I’m drawing on the expertise of Doug Thorburn, former BP pitching guru and current director at the National Pitching Association, because I could see but not describe or understand this change adequately—his spine movement changed.

Previously, he’d had what Thorburn called spinal hyperextension, such that he was almost leaning back when releasing the ball. In his June 16 start against the Astros, though, it was clear he had started to develop what Thorburn called flexion in the spine. He was leaning slightly forward at release. That gave him better extension and the hitters less time to pick up what was coming, but much more importantly, it clearly created the missing efficiency in his physical throwing process. He was releasing the ball with better arm speed, cleaner action, and more stability. I know for sure that this was the final piece of the puzzle, because once it fell into place, Pomeranz got back a key weapon in his arsenal, one that was missing early in the season: fastball spin.

In a podcast interview with members of Baseball America several months ago, Kyle Boddy of Driveline Baseball posited that spin rate could be an indirect indicator of the overall efficiency of a pitcher’s mechanical process. He meant, in that context, that a guy with great spin rates coming out of high school shouldn’t be considered more likely to add velocity as he grew, or anything, because the fact that he was showing great spin rates probably meant he was already doing something more efficiently than his peers.

Here, though, I’ll take the thought in another direction (one some teams have explored, and continue to explore): maybe variation in spin rate from an established level can let us know when a pitcher has either found something that really works and suits his delivery, or is pitching through something serious—be it an injury or just a major malfunction of his programmed mechanical signature.

For Pomeranz, it was probably some of both. What’s most important to know is that, for one reason or for a number of them, he saw the average spin on his fastball fall from 2,470 RPM in 2016 (an elite number, especially for a starter) to 2,283 in Phase One of 2017, and it rebounded only to 2,306 in Phase Two. In Phase Three, however, Pomeranz’s average spin rate on four-seamers has been 2,414 RPM. 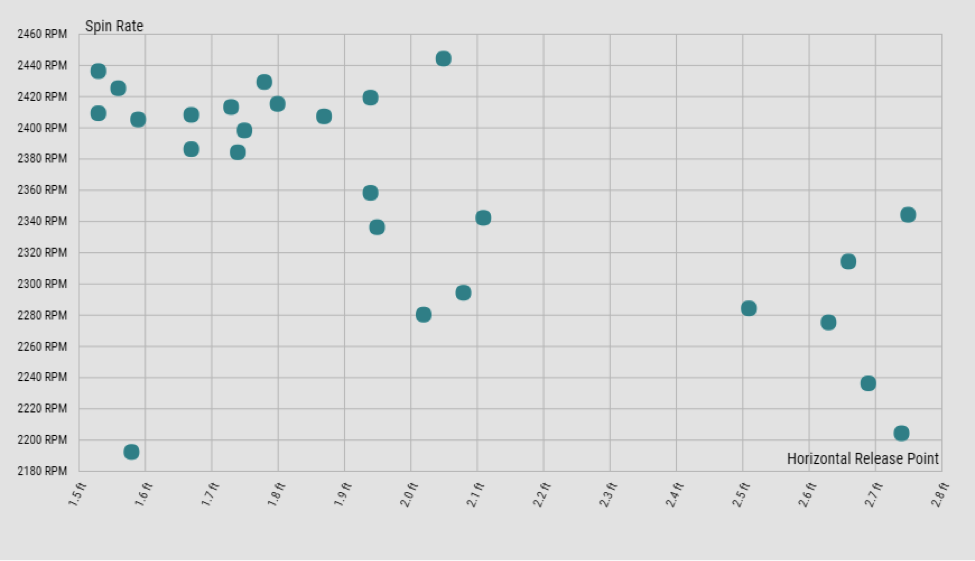 You’ll rarely see a tidier graph (stay with me) for a pitcher who made so many in-season adjustments, and didn’t make them all at once. This is simply a plot of horizontal release point against spin rate, but it tells us everything about Pomeranz’s changes in visual form. The six points on the right edge of the plot are Phase One. His spin rate was down, due to his injury issues and his mechanical inefficiency. The five points in the middle and the one in the far lower left comprise Phase Two, when he was making adjustments but not yet having much success with them. The big constellation in the upper left is Phase Three: he’s moved over on the mound, shortened his arm path (such that the ball is coming out even further toward third base, close to his body, maximizing deception) and discovered the elite spin that allowed him to thrive last year.

Hitters just can’t deal with Pomeranz when his stuff is humming the way it has been since mid-June. He’s induced weaker contact, not just with the fastball, but across the board. He’s mixing in a sinker now, too, a pitch well-suited to his changed delivery and spot on the rubber. Opposing batters have to deal with a pitcher whose command has improved by leaps and bounds since April; who now throws four pitches with enough frequency to keep them honest; who gets on them faster with his altered delivery; and whose fastball will blow right by them up in the zone if they try to look for the curveball. They just don’t get a fair shake.

If the playoffs began today, the Red Sox would have a strong case to be the favorites for the American League pennant. Given that Cleveland is the defending champion, and given the Astros’ early dominance, that’s surprising. It also might not be true by the time the playoffs really start. Pomeranz could enter an ugly Phase Four, or batters could simply adjust to his adjustments in some way that forces him to get back to missing bats more, and that could make the exceptional contact management he’s done for the last half-season tough to sustain. In fact, if this story contains a lesson (and not just an explanation of the recent past), it might be that pitching excellence is extremely multifactorial and difficult to sustain. Still, for the moment, this evolved version of Pomeranz helps set the Red Sox apart, and the way he’s gotten to that point is pretty interesting.