It was the top of the ninth, and they were down three. I had watched about seven minutes of the whole thing, considering most of my time was spent negotiating my in-laws squabbling to my right as my father, an empty seat to my left, left for a smoke break that took three innings. I thought at first he left through the wrong exit, denied re-entry through his tobacco timepiece, a nicorette hourglass which demanded ransom from life in lost years at the end or mere interrupted minutes last week. It turned out he simply misplaced his keys.

As he sat back down, Robbie reached on pitch three.

The one rule was that politics were a no-go. Of course, that detente would not last even as long as the drive home: the visit encompassed seven further days and our blood runs stubborn, stubborn and it left us no choice. And yet, then, the Mariners had lost three in a row and goodness if there was anything else to talk about on that afternoon of August 13th it was that this team had no business being anywhere near the running, as they–Nelson Cruz–walloped the first pitch he saw into left field to bring the tying run to the plate.

For a moment, it was as the eclipse which soon followed. It was baseball, its requisite metaphysics.

There were years between us all: sorrow I abandoned her faith, confusion over my thirty-something values all but imperceptible through the glasses History handed them both in the middle of the century. Disappointment recorded not in discourse, but in the words withheld from conversation between each Beer Here.

But instead of that we watched as Kyle Seager looked at three pitches to strike out, and we each cursed in our own language. We watched as Jarrod Dyson stumbled up, fouled off his first pitch and then beat out a grounder up the middle to reach and bring the Mariners within two. We stood and cheered–even though it was perhaps the third game she had seen all season–and for a moment we believed, we believed that something else was possible and the rift that had grown between us all for the past few years was nothing more than a just-out-of-reach appearance in the second Wild Card spot.

Later we sat down as Guillermo Heredia made it two outs. Up walked Leonys Martin, who promptly hit a 2-0 pitch towards the warning track, an ocean of bodies standing and shouting, quickly realizing it would either reach the glove of an outfielder or fall past that distant yellow line left there, out of sight.

We looked in the air and our eyes followed the ball as it surpassed the zenith of its curve, our heads echoing its descent as woven red lines tumbled over and over themselves,

The Entree is German Trout

Alexander Zverev is about the hottest thing going in tennis. Every publication you could want shouting your name has shouted his name heading into the U.S. Open, the main draw of which began on Monday. The young German of Russian descent enters the tournament ranked sixth in the world, and seeded fourth due to some top players being hurt; these single-digit numbers mean those publications should have run their "He's Next" articles six months ago if they really wanted to get out in front, but let's not quibble.

The reasons for Zverev's rise were summed up by Chris Almeida in The Ringer: he's enormous (6-foot-6) but moves with the grace and agility of a smaller man; his strokes are steady without being obviously spectacular; he does everything well rather than one thing freakishly; and, maybe most of all, he plays with the serenity and confidence of a player with major titles under his belt rather than a 20-year-old just getting used to international acclaim.

Who does this sound like? This being a baseball publication, I'm not here for your tennis comparisons, and in any event there aren't really any good ones. I'm thinking, just a little, of Mike Trout. The Millville Meteor's size-speed disparity is brought about by width, not height, but it's still striking: Leaving aside NFL linebackers, who else barrels around the field despite a body that measures the same in each dimension? How many 250-pound average-or-better center fielders can you name? About as many as you can 6-foot-6 defensive baseliners, I reckon.

Trout doesn't have Giancarlo Stanton's power, Joey Votto's plate discipline, Jose Altuve's contact ability, Kevin Pillar's defense, or Billy Hamilton's baserunning. He's just a Frankenstein's monster made up of 80 percent of each of those guys in a league where 50 percent would make you an All-Star; it's not so much, for both Trout and Zverev, that the whole is greater than the sum of the parts as that the sum of a bunch of really good parts is greater than the sum of one great part and a bunch of okay ones.

I've left the least tangible and therefore most important comparison for last: The 20-year-old Trout owned the league at an age when mere habitation would have been impressive, playing with the aplomb of a 10-year veteran who had long since acclimated to the travel, the grind, the fans, the heat, the road food, and the myriad distractions of being young, rich, and attractive. Not just anybody can ball so hard at so tender an age, but fewer still are going strong five years later. Is Zverev the Trout to Roger Federer's Barry Bonds (no, the timelines don't match up; no, I don't care), or merely the Joe Charboneau we all worried Trout could be? Keep tuning in. 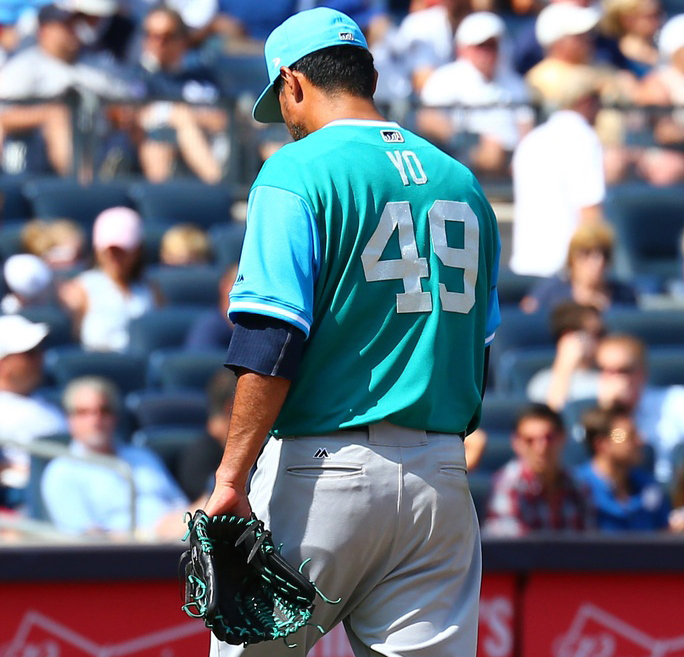 I am a fan of the Seattle Mariners. It is it the keyhole to which I press my eye, through them I experience the larger culture of baseball. I do this because I have always done it, and because they are close at hand. The “shop local” ideal is strong within me, and that extends to baseball teams.

The Mariners have not made the playoffs since 2001, which is the longest streak in the major leagues. They have never appeared in the World Series. Outside of 116 wins in 2001, and six miraculous weeks in 1995, they are possibly the least successful franchise in the sport today.

It’s the kind of failure that can lead to beautiful expressions of experiencing failure, and Mariner fans have been up to that task over the years. At some point, however, you want to win. The 2017 Mariners, thanks to Nelson Cruz, and an American League as impressive as a collection of small town politicians, have a chance to break to do just that, and give Seattle a game 163 for the first time since Smashmouth actually was an All-Star.

Here are the Mariners’ starting pitchers in the month of August:

Baseball is a sport where roundness meets roundness at incredible speed. That combination of geometry and physics has a high degree of randomness baked into its code. One description of baseball analysis, perhaps, is simply trying to separate what is random, from what is not.

With thirty games remaining, the Seattle Mariners have 66 wins, and 66 losses. Given the pitching staff listed above, the wonders of modern analytics, and a lifetime observing the game, it starts to become clear which 66 has more randomness than the other. It’s not the one I’d like.