Skirmish of the Roses 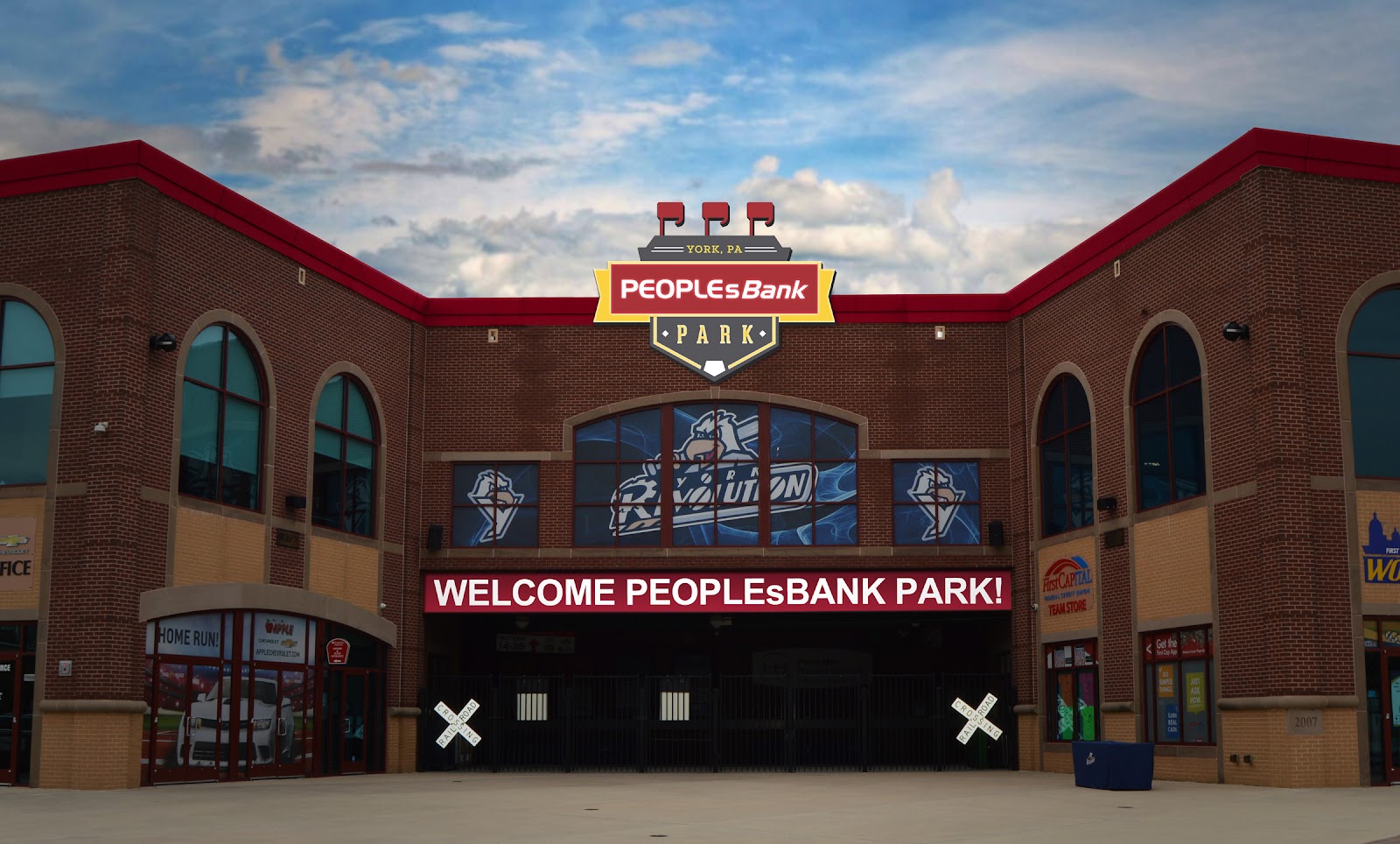 UMPIRE:
Now is the winter of our discontent
Kept still sad winter by this game in York;
Some major leaguers who late played the game
Now in the Atlantic League are buried.
They’ve not hung up their bats or bruised arms;
Their swings still yearn for new merry meetings,
Happy marches onto some 40-man.
But late-season war disrupts Amish country;
Lancaster and York vie for mastery:
Which second-half king will be newly crowned?
Instead of mounting barded steeds, proud York
Tested their adversaries’ brandished bats
With pitching seasoned then lankily new.
But Lancaster bowed not to pitching tricks,
Nor swung freely after the third inning.
I called three straight walks, then two singles’ bite—
The fastballs and curves lacked pure majesty—
And the Barnstormers’ bats proved not wanton.
York curtailed the fray by veteran wiles
And cannon blast: Alexi Casilla
With patience walked from Baltimore to first,
Then trotted in afore Tejeda’s shot.
The final score will belie the line’s skew.
Oh, viewers on this cool August eve
Have such delights to pass away the time:
Bubble-ball jousts and tricycle racing—
All merriments aslant our baseball work.
And therefore, since I cannot prove a lover,
To call strikes these raw borderline pitches,
I am determined to prove a villain:
Call foul a replayless home run, inches
In dispute. Fans saw it clearly neither;
Their drunken prophecies, libels, and dreams,
Crave setting their York Revolution and
Rose-red Barnstormers into deadly hate.
If the League be true and just, the standings
Will bear it out, not I. This baseball life
Endures by stately innings’ pace. Triumph
Follows prophet history: Lancaster.
Pitching murdered York’s youthful airs, not me.
Dive, thoughts, down to my soul: here
York’s pitching coach comes.

Entering Sunday, Baseball Prospectus had the Mariners playoff odds at 19.3%. Exiting Sunday, the Mariners carried a 10-1 loss out of the Bronx after committing five errors in the first inning. They were diminished, as was my faith in them. In the grand scheme of things, it was just one game; in the story of my life, it has been sixteen years since the Mariners were in the playoffs and I despair easily. 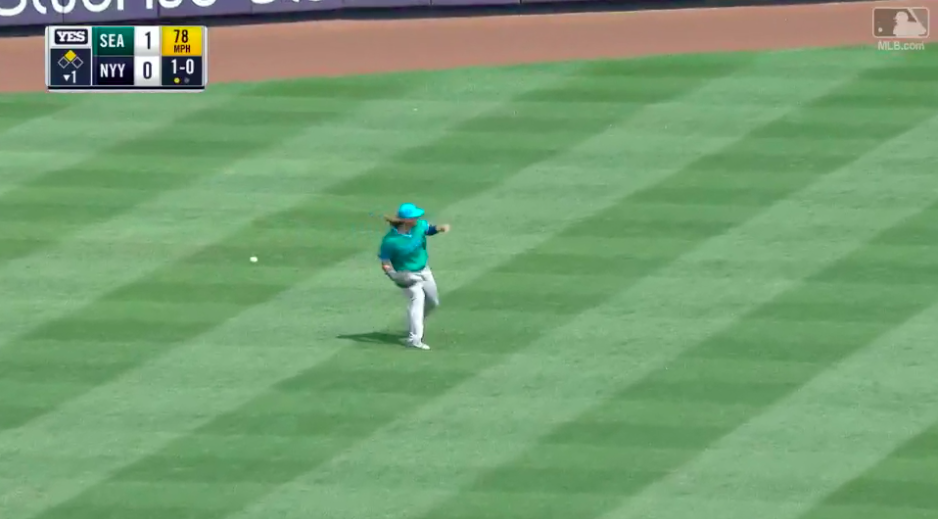 This is fine. This is one mistake. I’ve made many mistakes. My mind seems to find them late at night, and play them over and over and over again, middle school rivals slighted and early-20’s boyfriends abandoned. Friends I could have been kinder to. I accidentally slammed my sister’s finger in a cabinet door once. Her finger works just fine now. Also, I was ten. There have been many mistakes in my life that have brought me to this particular moment; it hasn’t been all bad. And while my mistakes visit me in the wee hours, I don’t remember the very first one. The very first one never seems like it matters.

Didi Gregorius reached on error to shortstop. Gary Sanchez advanced to 3B. Aaron Judge advanced to 2B on error. Error by Jean Segura.

I always wondered what happened to the aspiring 90’s boy bands who couldn’t dance. I’m sure there were any number of bright young things, with good voices and great ambition, who stood in front of Lou Pearlman and sang their hearts out, only to get tripped up during a step-ball-change and be informed they just couldn’t tour. You aren’t Lou Pearlman material. I wondered what Lou Pearlman was up to during this moment. And you know what? He’s dead. He was convicted of perpetrating a $300 million ponzi scheme, sentenced to 25 years in prison and died in federal custody in 2016. Death after a long fraud seemed somewhat relatable in this moment.

Chase Headley reached on fielder's choice and error to third. Gary Sanchez scored on error. Aaron Judge advanced to 3B. Didi Gregorius advanced to 2B on error. Error by Kyle Seager.

We assume that things change over time because they always have. Except eventually they’ll stop changing until the universe collapses into a hot, gooey mess of nothingness in which everything is the same. I watched the third error of the inning, and thought, “Well of course that gooey nothing would be presaged by a late-season Mariners collapse.” Then I felt embarrassed for being so melodramatic. Though probably not as embarrassed as Kyle Seager felt.

If I were suddenly called upon to be a shortstop, I’d worry about hitting or throwing wide of first base or being slow, but I’d be silly to worry about that. Because while I’d surely fail in all of those ways, this is how I would fail and feel the worst. I wouldn’t be able to find the ball. Jean Segura rushed the throw a moment later for his second error of the play. I’d probably do that, too.

10 PM, post-Game of Thrones. Meg reflects on the day's baseball. What an odd thing. That can't happen again, can it? 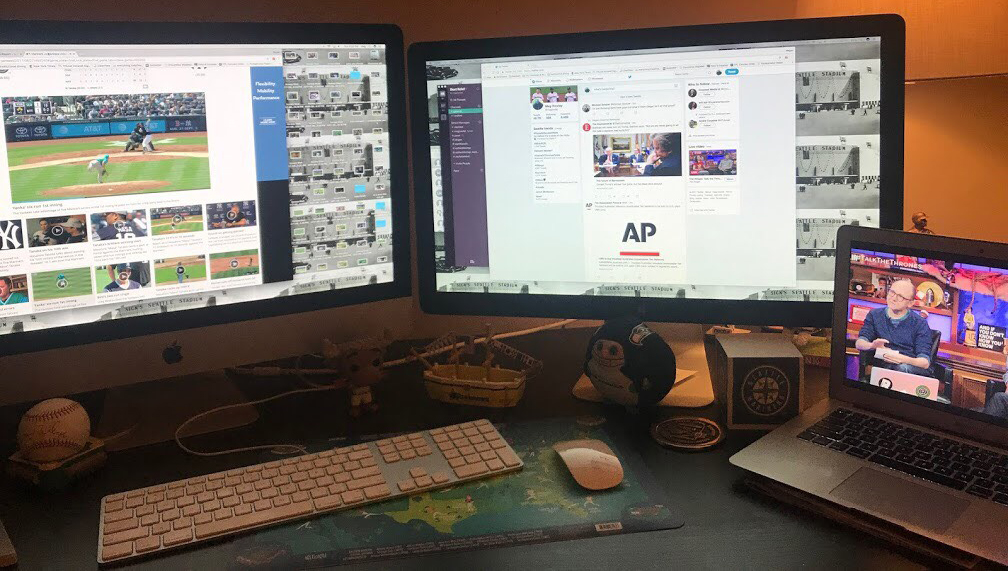 I mean, they do play again tomorrow.

Horror movies never jump right into…horrifying. They have to introduce some notion of flimsy optimism and prop it up just enough to provide some catharsis or impact to watching it be destroyed (“Amityville is a nice, quiet place for our family to settle!” etc.)

Two weeks ago, the Mariners introduced the protagonist of Andrew Albers, a 31-year-old journeyman plucked from the Triple-A Gwinnett Braves to enter a playoff chase. Albers had not won a game since 2013, and spent 2017 trapped having a great, finesse lefty season for an organization that had no interest in it. With this background, he was able to place hope on something as far-flung as Mariners playoff hopes.

“It’s hard to put into words right now,” Albers told The Seattle Times. “You never know when these opportunities are going to come up or how many of them you’re going to get.”

That starry-eyed optimism is what made Albers so resistant to accept that Sunday’s first inning in Yankee Stadium as a descent into hell until late. In typical fashion, our protagonist tries to resist the first sign–Ben Gamel letting a Gary Sanchez single pass through him like water–as a simple strange occurrence. 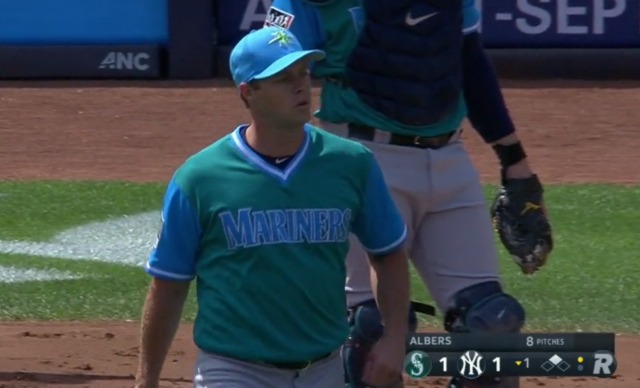 Just when an inexplicable dropped popup by Jean Segura and a Kyle Seager error on a seemingly routine grounder threatened to make it clear that this inning and the Mariners were cursed and Albers should flee, strip off his garments and renounce his associations, fate tossed him a bone to keep believing: a bases loaded strikeout of Todd Frazier. 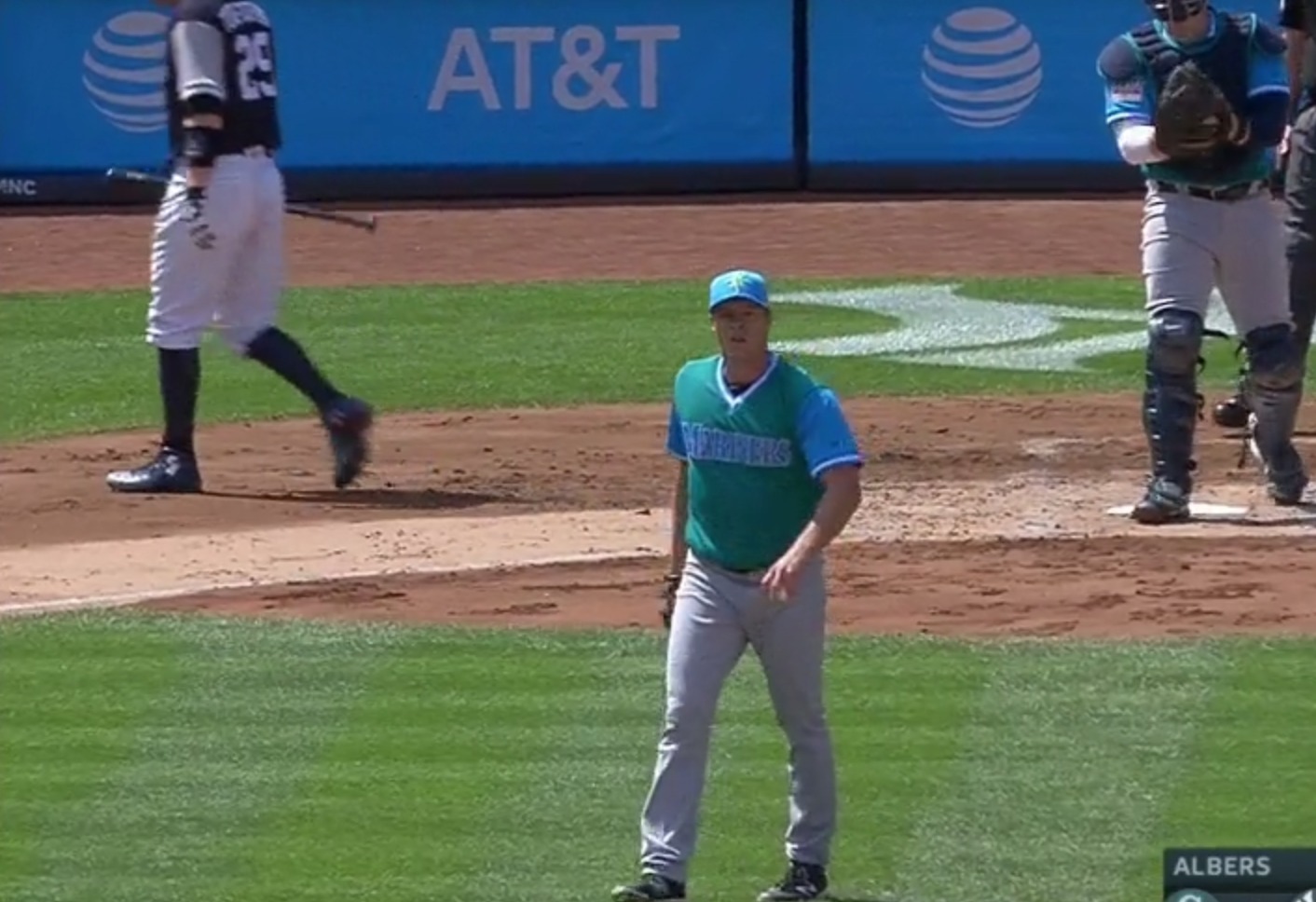 “This is why it’s important to always believe in yourself, because you might just escape with only two runs across, pending the result of the next PA.”

The ultimate terror of good horror is that the doom comes not from outside, but within. Despite his new trappings of major league luxury and talent around him, Albers is a man who has plied his trade in the minors for too long to ever think that minor league quality defense is something he could ever truly escape. When Jean Segura followed up a missed catch error by airmailing a throw home for another, Albers was already backing up the play. 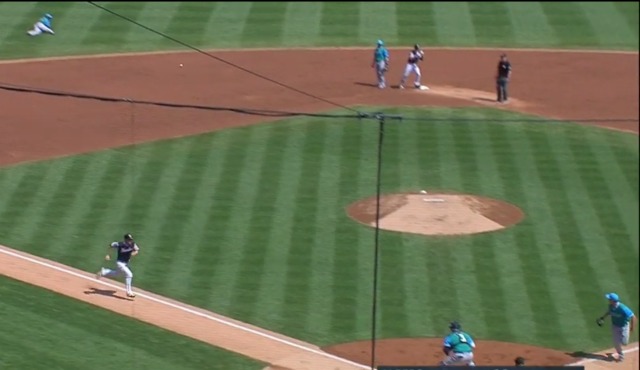 At the moment of realization, that the past can never be escaped, it does indeed bring a moment of clarity about the true nature of the situation that lies in front of the protagonist. 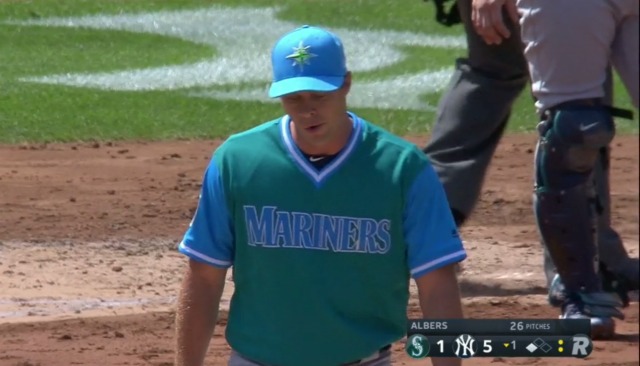 Albers survived the inning, as most horror protagonists do, but with his innocence gone. He will know only vigilance and survivalism, as he prepares for the next five-error inning to be around every corner. 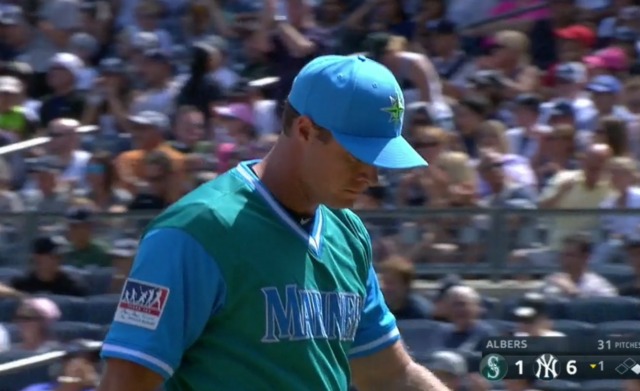 “Next inning I’ll just make all the plays myself.”

You need to be logged in to comment. Login or Subscribe
boatman44
Once more unto Baltimore dear friends, where the winds of change shall favour.
Reply to boatman44
jremcase
Brilliant literary piece by Holly Wendt. As I see it, there is hope for the soul of American culture now that more women are writing about baseball.
Reply to jremcase