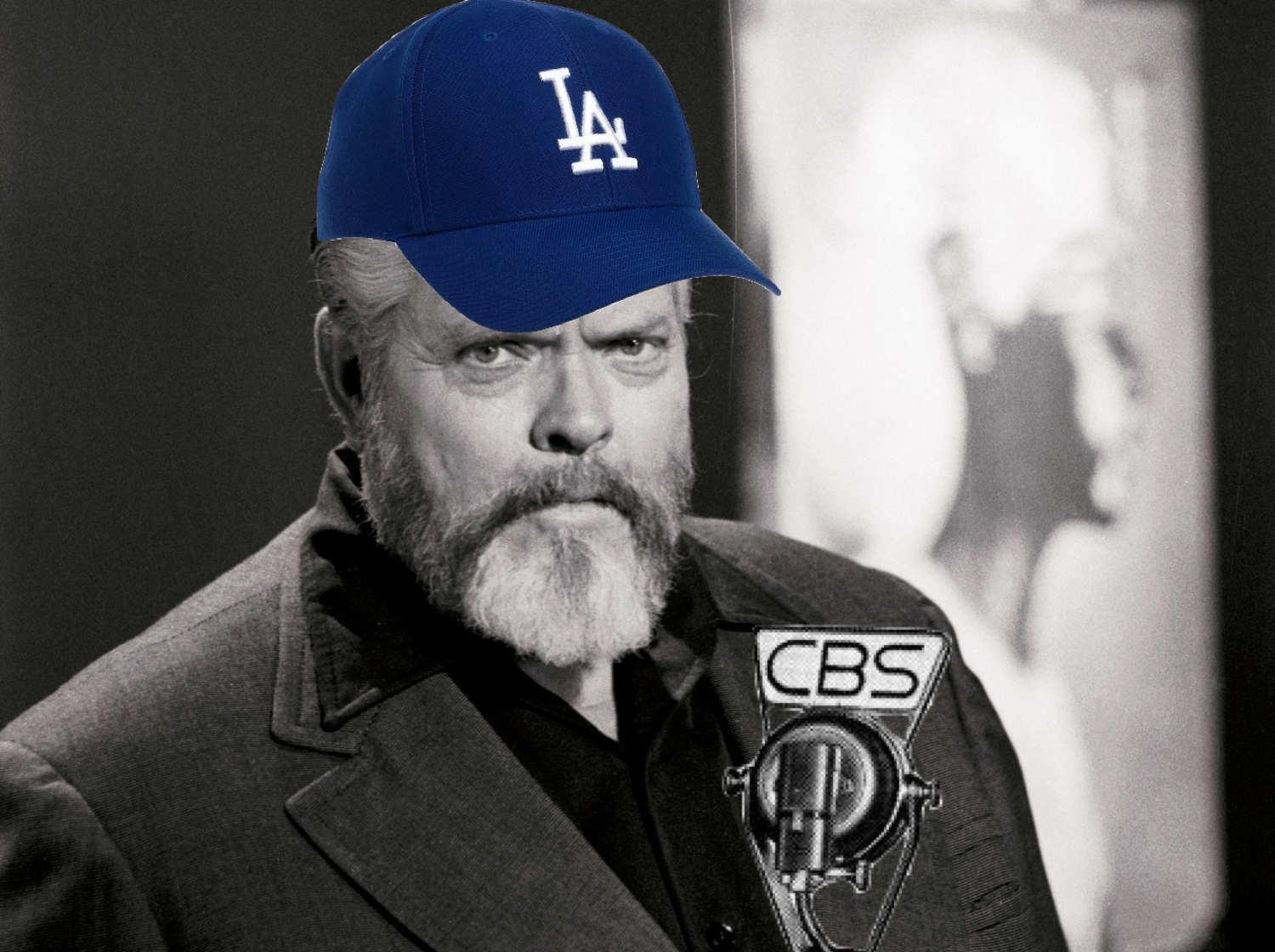 The right venerable Vin Scully, embodied singular century of baseball history, retired from calling baseball games in September of 2016 as the Los Angeles Dodgers continued their franchise-defining payroll-skyrocketed playoff run. They did not win the playoffs that season. Perhaps it was because they didn’t allow the twentieth century’s greatest radio artist to sit at the mic each game, refusing them a run which would be realized one season later: by reanimating the corpse of the man himself to call the run as he did the Martian invasion of Grover’s Mill, the sled of Kane, the encroaching modernity of the Indianapolis Ambersons. We check in with Orson in the middle of last night’s 8-5 Dodgers win over the Pittsburgh Pirates to see how our beloved Dodgers are handling this historic situation, and to see what the next few days might deliver. Will the Dodgers take their right place as one of the greatest teams in baseball history? Or will they be sidelined by the loss of an iconic baseball broadcaster to perhaps the 20th century’s most iconoclastic dramatists? Let’s see how much influence he has yet to give as we travel over to Pittsburgh for their latest game:

Orson Welles: …ight as we return to the battlefield where our brave men in blue stand up against those darkened shadows from the middle, that yellow bridge reflected in their corneas out from the Last Day as that great comet shines across the sky, calling for the final breath in our lungs. They told me McCutchen. They said Marte. But what I was given was one Edgar Santana, and I watched as the tears dripped from his eyes as he cried out father, father I wait for thee, I wait for us all.

Rick Monday: Santana is really having trouble locating his breaking stuff here into the seventh, as you see here in this at bat to Yasiel Puig. You’ll notice the late break on his curveball–you may see where Diaz is trying to set up the pitch–but it just falls short, and the batters aren’t let off their guard because they know his arm is tiring. Orson, what else do you see here?

Welles: In his eyes is eternity…the blood dripping from his fingernails as he stares into the nothingness that is his eternal enemy. But who may be his foe? And yet, each minute, his corporeal shape changes: Granderson. Grandal. Puig. One thousand voices beckoning the void beyond as they declare it is me, it is me who shall demand myself the victor of the…

…and watch as they never become quite of their time. It is the magician….the magician that declares the illusory as content, the very Stuff of our modern capitalist society that recalls the shamans of yore, the single man who stood up against the fire to declare that I AM, I AM THE ONE WHO SEES THROUGH THE FIRE.

Monday: Aaaand a real bad pitch there from Santana, as Yasmani Grandal evens up the count at 2-2. Grandal’s slugging percentage seems to be something on Santana’s mind as he continues to attack the outer portion of the plate–and you have to wonder if his bat speed is–

Welles: They told us that directors…directors are not actors. But hear me, follow me back to that first fire, that moment when the First Man stood up to declare he Has A Story. No, no–There never was a man who said Let’s Have A Story, there simply was A Story. We are all….all of us, ALL OF US….actors!!!!!

/Yasmani Grandal drives a 93.8 mph sinker past the fence to put the Dodgers up by three, ensuring at worst a series tie, at best an over .500 season that must have Los Angeles fans excited for what could arguably be one of the greatest baseball seasons in the near two-century-mark of the entire game

Monday: Grandal clobbers this ball as—

Welles: as my cup which runneth over, and I realize that man is little more than a fly, crawling over the face of the moon. Man….man himself, who built the greatest monuments to civilization now left to rot in the eye of the Star Maker. Perhaps Christ himself, who

/Logan Forsythe promptly stares at three consecutive strikes in the zone, walking back to the dugout to end the inning and bring his batting average down to .241

Welles: Stared at the sun as he hung up there, to die,

Welles: on the day in which the sun was blotted out by th–

There are more. I encourage you, because I regrettably cannot force you, to add your own in the comments, on Twitter, to your neighbor with no context given, or wherever your heart takes you.

Bottom of the 9th: The Short Relief Review

The following continues a series of short examinations/reviews of the intersection between baseball and board games. The first entry in this series may be found here. 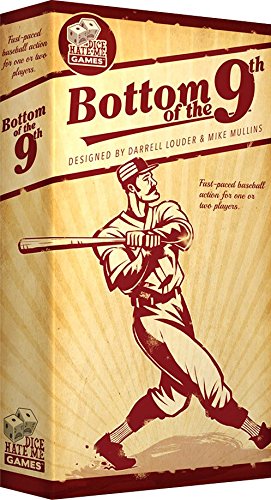 Bottom of the 9th

Welcome back to the tabletop, Elysian Fields. Our last review looked at Baseball Highlights: 2045, which used clever, back and forth card play and a small deckbuilding element to swoop over an entire, best of seven series from a 20,000 foot view. Today’s subject, Bottom of the 9th, drops us down to the extreme closeup of a single inning, and every pitch could be the one that ends the game. 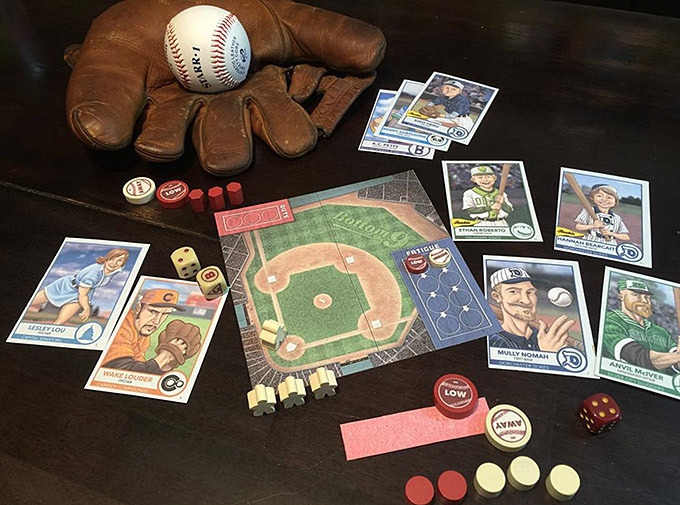 Like baseball itself, the core of what drives BOT9’s tension and fun is the face off between hitter and pitcher. Each player, one representing the defense, and one the offense, takes two large, double-sided, baseball shaped dials. In the phase called the Staredown, these are secretly played simultaneously and respectively they determine the location the pitcher is attempting to hit, and the batter’s guess of the same thing.

The bluffing, and counter bluffing involved in this key step of the game leads to some very tense, entertaining moments. This is buffeted by each pitcher having an “Ace Pitch”, a special power that can only be used if the pitch is thrown in a specific location. I.e. “Low and Away”. However, the pitcher has a fatigue meter that only allows for so many of the same kinds of pitches to be thrown. Exhaust your Ace Pitch location too early, and the batter will know exactly where every pitch is going for the rest of the at-bat, lending a huge advantage.

From the Staredown the game moves to the pitch and contact rolls, as each player rolls their die/dice to determine whether the pitch is a ball or strike, if the batter makes contact, and how good the contact is. It is here that the special abilities unlocked through properly guessing the pitch location factor in heavily, as the ability to mitigate the randomness of the dice is the primary skill component in BOT9. 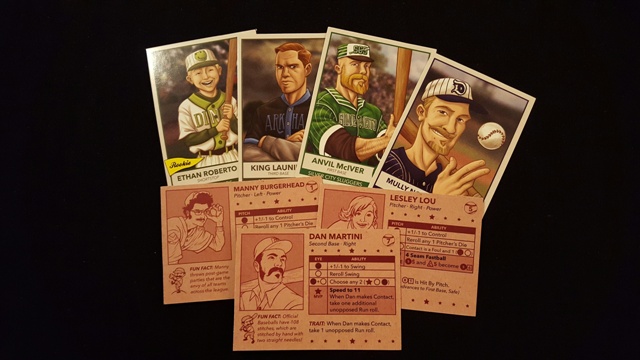 It’s here that we can digress briefly to discuss aesthetics, because each player’s perks, special abilities, and Ace Pitches are printed on gorgeously designed cards, which are lovingly crafted tributes to 80’s baseball cards. Even the little strip of cardboard used to track the count flips over to look like a stick of gum. The overwhelming “when we were young” vibe is certainly equal parts cynical money grab, and over the top kitsch, but baseball has always been elbow deep in both, so I had no issue with it.

The staredown, pitch, dice rolling, special power-mitigation goes on until either the batter’s team scores, or there are three outs. In such a simple game it would have been easy to have the game grow stale quickly, but BOT9 is filled with lovely little features that help bring the narrative to life, and keep the game interesting. Did the batter hit a walk off home run? Wait, the defense still gets a chance to jump the fence and Mike Trout you. Pitcher throws a spitball? Great! Roll a die though, and if you roll a one your pitcher is caught in the act, and ejected.

While the heavy dice influence may offset gamers who enjoy more deterministic, skill-based rulesets, the quick game play (you can play 2-3 games in a lunch hour), easily explained rules, and very portable box make Bottom of the 9th an easy recommendation for a baseball & board gaming fan. Add in a refreshingly economic price, and the recommendation becomes a near command. Skip a few days of lattes, and buy Bottom of the 9th.

Short Relief Board Game Board Official Review Score: 9 Kent Hrbeks out of a possible 10 Dizzy Deans

You need to be logged in to comment. Login or Subscribe
buddha
Manny Burgerhead is a good name, but Anvil McIver is a *great* name.
Reply to buddha