We’ve reached the end times. Last week the Cubs, facing Joey Votto, decided that the best way to defense him would be to have Kris Bryant play a little closer to the left-center field gap. The problem was that Bryant was listed as the third baseman at the time, and so he became the fourth outfielder. Votto smashed a grounder down the first base line for a double, but for a moment, it was possible that I was going to have to explain to my kids how it was that Votto had both popped out to third base and hit one into the gap in left-center field in the same plate appearance.

Last year, Emma Baccellieri argued that baseball was subtly moving toward being a “position-less” sport. She pointed to the feedback loop that seemed to occur late in 2016 when, in an obvious bunt situation, Joe Maddon (who else?) had Ben Zobrist and Anthony Rizzo change places. Normally, in a bunting situation, the first baseman prepares to charge the deadened ball, and if his play is to first, it’s usually the second baseman who receives the throw. Why not have Zobrist—who (at least part of the time) actually gets paid to field ground balls on the right side of the infield—field the ground ball on the right side of the infield and throw the ball to Rizzo, who gets paid to catch balls at first base?

But did that make Rizzo the second baseman and Zobrist the first baseman? In the record books, it did. The Cubs do this switch every now and again with Rizzo, and as a result, in some fantasy leagues, Rizzo is now eligible at second base!

Even before that, there had been spreading discomfort about how we keep records with the infield shift. Teams often leave their shortstop, the player with the most range usually, on the left side of the infield, and then shift their third baseman to the right side of the infield. What does it mean that the guy listed at third base just fielded a ground ball in short right field and threw the batter out? Sure, we can score that a 5-3 ground out, but there’s a lot of unpacked baggage around what a 5-3 ground out is supposed to look like.

Perhaps we are not in the end times. Perhaps we are simply seeing the next iteration of a process that has been going on for a long time. Maybe the long arc of baseball has always bent toward positional anarchy.

Chris Gimenez of the Twins has been a bit of a rebel this year and done something that no one has been feelin’ since 1966. Gimenez has held down backup catcher duties for the Twins, as well as a few guest appearances at first base, third base, and left field. He’s also made (as of this writing) six appearances on the mound in mop-up duty. He becomes the first player to make five or more appearances as a pitcher and five or more appearances at any of the other defensive positions since Mel Queen did it for the Reds in 1966. (Since Queen was being shifted from being an outfielder to a pitcher, he really was coming out of left field.)

It’s worth looking at this chart from a historical perspective, going all the way back to 1871. 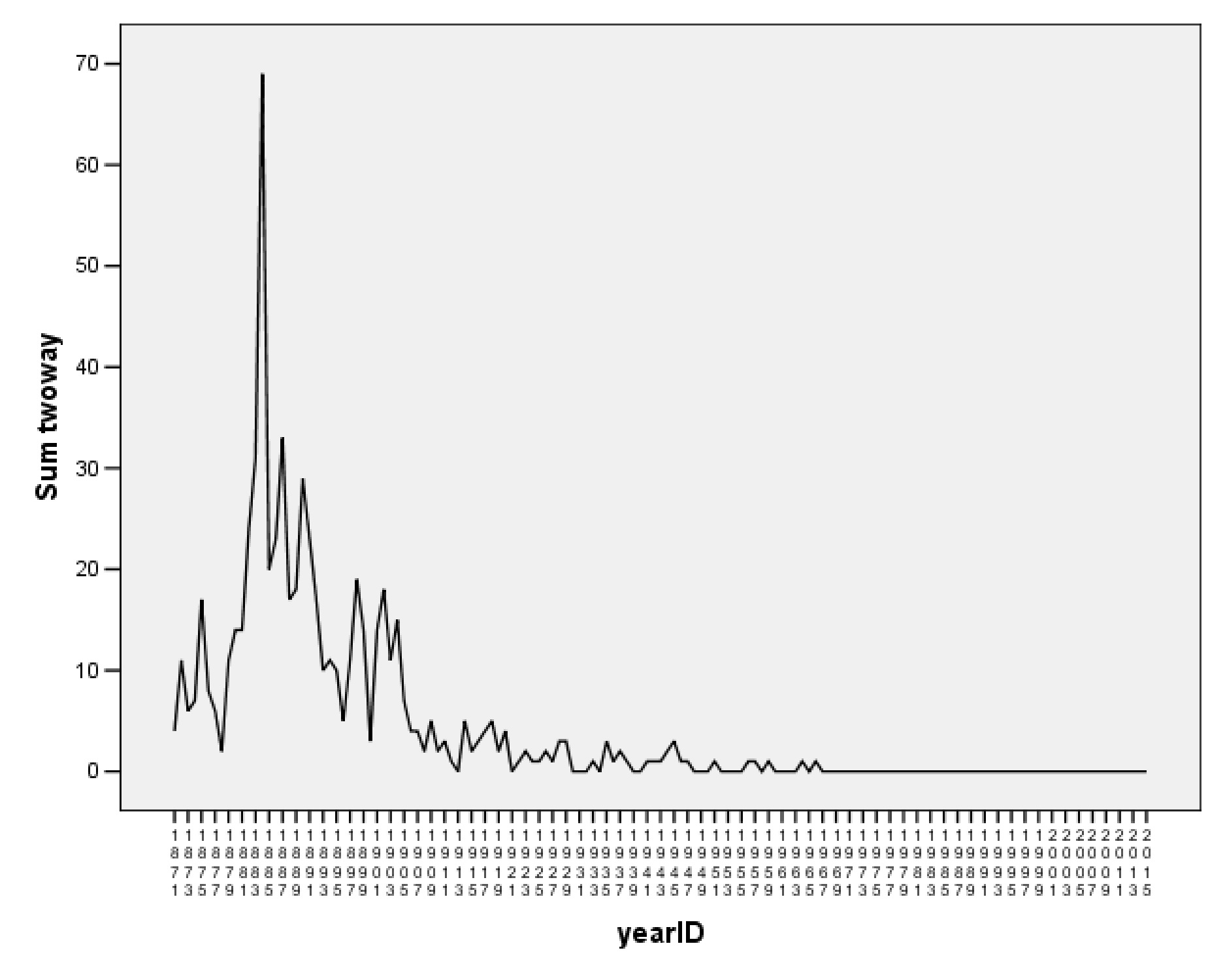 In the 19th century, there were a lot of these two-way players around, especially given the fact that there were fewer teams back then. (The spike in 1884 is the influence of a third “major” league—the Union Association, which played for one year.) As the years wore on, there would still be the occasional guy who was good enough both at pitching and position playing to hop over that fence. Eventually, that idea disappeared. In fact, it’s now rare that anyone accomplishes the five-and-five feat in total during their career.

There are a few isolated cases over the last 20 years or so, with outfielder-turned-pitcher Adam Loewen, pitcher-turned-outfielder (turned life skills coordinator) Rick Ankiel, and Brooks Kieschnick, who is much of a gratuitous name-drop in these sorts of articles as Shohei Ohtani is. Ron Mahay actually played five games in the outfield with the Red Sox in 1995 after impressing during the “replacement spring,” but after the team realized that he was left-handed, they sent him to learn how to be a pitcher. Somehow, Aaron Miles also snuck onto that list.

What’s interesting is that over time, pitching has tended toward specialization. Into the 1970s, it was common for pitchers who were primarily relievers to still start a game or two, and there wasn’t very much separation between the results that starters and relievers got until the late 1960s. As time has gone on, relievers have become more specialized, although surprisingly, not for the fact that they now make more micro-appearances, but because they make more appearances that last exactly three outs. Relievers and starters became two very different roles with two very different job descriptions.

Position players went in the other direction. Here’s a graph of how many players have played in at least five games at three and four positions during each season. (Note: This graph counts all three outfield positions as “outfielders.” A similar graph, starting in 1953, when LF/CF/RF data began being kept separately shows the same pattern.) 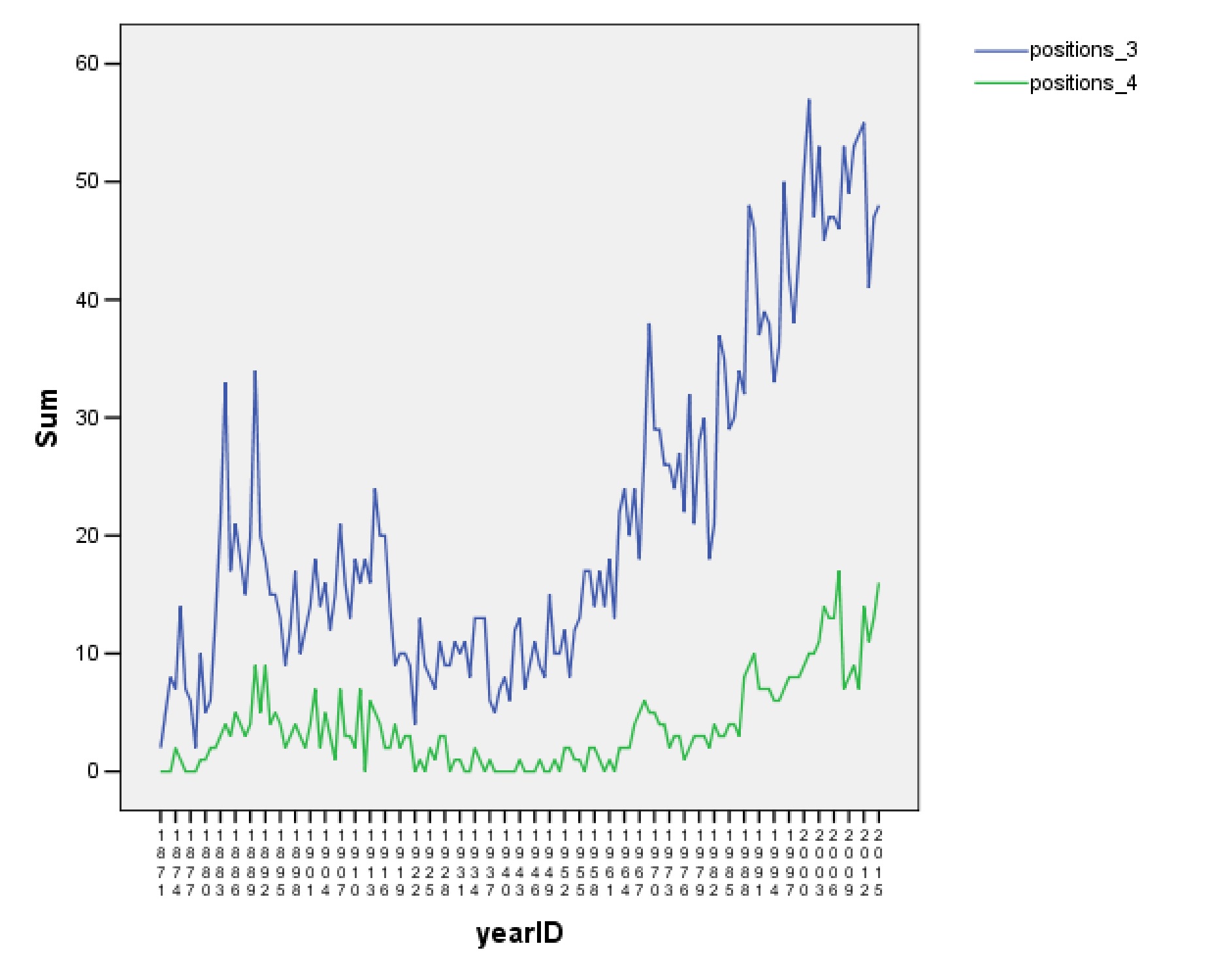 We see over time that there are just more players who are willing to pack more gloves in their bag. Some of that is that the league has expanded over time (though not all of it). Some of that has to do with the fact that teams have gone with larger and larger pitching staffs, so players who can fill several spots have become more important. When there are only four seats on the bench, you have to be able to get a lot out of those players.

And we’ve seen a corresponding slack in the way that positions are perceived. I’ve documented that teams, on the whole, treat left field as a slush spot, as it's one of the least demanding defensive positions. Some teams forego having a regular left fielder, and instead will pick their lineup based on matchups and throw one of the guys into left. With the advent of teams shifting on about a quarter of all plate appearances, the idea of players having a position, or that position being a fixed thing even during the game, seems quaint.

And yet, baseball’s vocabulary to describe this sort of movement hasn’t really kept up. The phrase “utility player” has come into the lexicon of the game, and the occasional “super-utility” player. What do you call a second baseman moonlighting in left field? What do you call Ben Zobrist when he plays “first base” on a bunt? What if (as Sam Miller once suggested) the Cubs also had whoever was playing shortstop that day (probably the better fielder) flip with the third baseman as well? Suddenly, it’s an inside-out infield!

But more importantly, could there possibly be value in all this?

What about the second-to-third shuttle? We know that fielding ability at second and third tend to correlate pretty well. We do have evidence that there isn’t a pinch-fielding penalty the same way that we see a pinch-hitting penalty. What if a team had a strong fielder and a weak fielder, both capable (in the broadest sense) of playing both second and third. One was a league-average fielder at both positions. One, if you left him out there for a full season, would put up a negative-20-run season at either spot, consistent with what we normally see from the worst fielders in the league. In theory, if the bad fielder represented a 20-run upgrade with his bat and legs over an average fielder, the move might be a wash.

Ideally, we could hide the bad fielder, but how likely is that? To check, I looked at data from 2012 to 2016, and coded all balls in play as to whether they were a chance for the second baseman or for the third baseman. (All other balls were ignored, because we aren’t worried about those positions.) Second basemen get a little more work, by about a 54/46 split, so in a world of static positions, the better fielder would probably play second.

However, when I asked the computer to predict whether a ball would go to second or third, only using the batter’s handedness, it was correct in 62.4 percent of cases. Not bad. (The effect followed exactly what we would expect.) I couldn’t always hide the bad fielder, but I’d be right more than 60 percent of the time. That doesn’t include any information at all about spray charts. With a little extra information, I could probably hide the bad fielder an extra 10 percent of the time (or so).

Over the course of a season, that represents about 20 percent of the traffic that he would have handled otherwise, meaning that a -20 season might turn into a -16 season, a net gain of four runs. Suddenly, if we squint, we’re in “half a win” land. On top of that, the popularity of The Shift demands a lot less out of an infielder. With three guys on the same side of the field, if one is a bit limited, it’s not as big a deal. He’s probably playing in short right with more time to react anyway, and he doesn’t have to cover as much space along the infield. In this overly-stylized example, our team could clear at least a couple of runs by running a second-to-third shuttle. Teams have gone to greater lengths for less.

I once again find myself returning to the fact that baseball seems to lack certain words, or that its vocabulary lags behind its reality. We have a language that speaks of players and the positions that they play, and assumes that they are standing within about a three-foot radius of where everyone else who plays that position stands. The reality is that players are more and more becoming multi-instrumentalists, both in terms of their stated home address and also in terms of what they actually do during a game.

Maybe it’s time we had a talk about the very concept of “position” in the face of the anarchy on the field.

You need to be logged in to comment. Login or Subscribe
roarke
I think morale would be an issue with shifting around the way you suggest. Once it becomes clear that you are trying to "hide" the lesser defensive player, it becomes an embarrassment for him. When it's an overshift or a bunt situation the players are all moving around and the manager can rightfully say that he's just putting guys in the best position given the situation, but if you are going to start switching your 2B and 3B in a regular defensive situation, then I think you might start having a problem with wounded pride.
Reply to roarke
EddSherwood
Perhaps baseball could adopt something like its distant relative cricket where fielding alignments are fluid based on the batter, game situation and bowler preference on a ball by ball basis. The recording of an outcome on any particular delivery is based on where the fielder is when he makes the play, not where he started the match. It would be fun to see a right-handed batter put out at cover (midway between 1B & 2B), silly mid on (very close SS) or long on (deep left CF).
Reply to EddSherwood
duncanf
A suggestion, would it be possible to provide a pop-up link for the images so readers can view a larger size graphic? Enjoyed the article!
Reply to duncanf