The story of how the Detroit Tigers went from Really Bad to Really Good deservedly includes Ivan Rodriguez and Magglio Ordonez, All-Stars who took a chance on a losing franchise; Dave Dombrowski, the man who organized the talent; Justin Verlander and Curtis Granderson, the draft picks who worked out; and Brandon Inge, Craig Monroe, Omar Infante, Nate Robertson, and Jeremy Bonderman, the players who bridged the gap. The one we always seem to forget is Carlos Guillen. You know, the shortstop. We even sometimes forget he was the shortstop for the 116-win Mariners, all while suffering from tuberculosis.

In one of those highway robbery trades, Dombrowski and Detroit then got Guillen for Roman Santiago (yes that one) and Juan Gonzalez (no, not that one), so that Seattle had room for incoming free agent Rich Aurilia. Guillen then transformed into an All-Star, giving the Tigers two of ‘em in a year (along with Pudge) for the first time in a decade. On the 2006 AL champion team, Guillen — not Ordonez, Rodriguez, Verlander, Kenny Rogers, not even Jim Leyland’s Ashtray — was the top MVP vote receiver. Throughout this, three of his four mentions in the BP Annual from 2004 to 2007 included the word “underrated.”

He further slips into the background of our minds because that’s basically what he did in the final playing years. Despite a move to first base to preserve his health, an unwise transplant surgery in the 2008 offseason switching out leg bone with glass femurs resulted in an average of 59 games over his last three years, all while earning an eight-figure salary. By that time, Miguel Cabrera was happening, Victor Martinez showed up and there were enough veteran bats present for him to bow out gracefully.

But he did have one highlight in 2011, his ultimate season with his penultimate home run:

Yesterday, you didn’t know his name. Today, he’s probably striking out your team’s hottest hitter. Tomorrow you’re checking on the pronunciation on his last name.

While Kahnle had a 2.63 ERA during his 2016 season with the White Sox, his peripheral numbers showed a different story. Kahnle sported a FIP of 4.46 that season, and walked a lot of batters. Like a lot. Kahnle walked 20 batters in 27 innings that season. But hey, his fastball topped out at 100 mph — they just weren’t over the plate.

2017 saw a different pitcher, as Kahnle danced with 100 mph on the black night after night in April, May, June and up until he was traded to the Yankees in July. He struck out 57 batters in 34 innings of work and only walked seven. He got to hang out with cool kids Craig Kimbrel, Kenley Jansen and Roberto Osuna on the AL FIP leaderboards.

Kahnle attributes his success to changing his mechanics, keeping his head toward home plate when he throws, and making a change in his leg kick that he discovered during a random start in spring, after he didn’t make the cut for big league camp.

But before anyone was sure that Tommy Kahnle 2.0 was here to stay, he was gone. The old saying goes: “Don’t it always seem to go that you don’t know what you got till it’s gone.” That felt true as Kahnle packed up his Star Wars memorabilia and his Eagles jerseys in the locker room. The White Sox knew that somehow this kid that didn’t even make camp was about to be huge.

The New York Times didn’t even include his name in the headline for the story they ran on the trade, a trade that White Sox GM Rick Hahn claims wasn’t going to get done without Kahnle. Google his name and you’ll be met with a flurry of “What you need to know” articles. The 28-year old messed around with his mechanics on a random March day, and then before anyone even knew it he was suddenly one of the White Sox’s hottest commodities.

Kahnle is now happy with the Yankees, the organization that drafted him. He’s even better than he was in Chicago — Kahnle is currently pitching to a 2.30 ERA with the fourth best FIP among relievers in baseball at 1.47. People still aren’t sure if you say Kahn-lee or Kane-lee, but soon he’ll be a household name across baseball. (It’s the latter.) 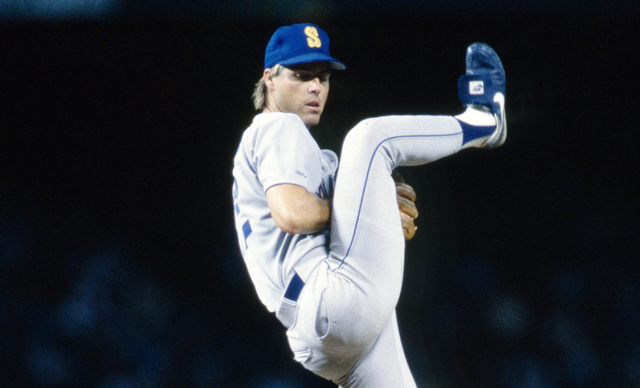 It’s sort of odd to appreciate absence while retaining fondness. You’re glad when spiders go back down the drain, or annoying relatives have concluded their stay. You’re happy to go return to the peace of the empty space they left behind. As a child, I was very happy to watch Randy Johnson pitch for the Seattle Mariners, but I couldn’t have been so happy without Mark Langston’s absence.

Langston was very good at a time when the Mariners didn’t boast many good players. He finished second in Rookie of the Year voting; he led the league in strikeouts three times. He had that crazy, shoulder high leg kick. He was an All-Star and a habitual Gold Glover and came in fifth for the Cy Young one time. That year, 1987, he was worth 8.0 WARP; he had a 3.10 DRA, though of course we didn’t have DRA then, and I couldn’t have looked it up even if we had. Langston was good. And I don’t remember any of it, because he pitched well enough to be acquired by the Expos for Brian Holman, Gene Harris, and also a guy named Randy Johnson.

Langston wouldn’t be totally absent from my view, mind you. After his stint with Montreal, he was signed by the Angels and spent eight very good years there. He’d pitch against the Mariners and have a sort of middling time at it; the radio would remind me that his frame in an Angels uniform was why we got to watch Randy, and I would reflexively look up, as if Johnson would be glowering over me.

Other parts of his career were marked by absence, though I doubt he thought of it that way. He had that great pickoff move, like kicking a solicitor off your porch. When he retired his 91 pickoffs were the most in baseball history; he has since dropped to fourth. But coming before good, reliable video, highlights of it are hard to come by. We’ll just have to remember. Then there was an absent called strike three in the 1998 World Series. Tino Martinez hit a grand slam on the next pitch; Langston lost Game 1. The Yankees swept the Padres. I, being a young enough kid to find such a thing to be a moral victory, refused to watch that Series. New York didn’t need more eyes. Then there’s his absence from the Hall; the dearth of even one vote, which seemed odd for a guy with Langston’s career.

These days Langston isn’t absent; he does radio for the Angels. On May 2, he threw out the ceremonial first pitch at Safeco, part of the Mariners celebration of its 40th Anniversary season. The crowd cheered, and highlights were shown. It was a moment for me defined perhaps for the first time by Langston’s presence. And it was nice, to at long last, celebrate him for what he brought with him, not what his absence brought back.