It’s not a new revelation that examining baseball’s Grand Steroid Era requires careful recalibration of the mind. This is a period that saw, in four seasons, 75% of baseball’s 60+ home run seasons. Before Moneyball brought a more nuanced and holistic appreciation for the manifold ways a baseball player can succeed to the masses, and with the media of the day rightly caught up in the dinger revolution, the period is ripe with less musclebound, more rounded players to appreciate. Or, in my case, despise.

As a teenager, the 90’s were my prime sports hating days, and the Mariners were the team I was most invested in. As such, all AL West opponents were ripe for ire and while Chili Davis, Juan Gonzalez, and John Jaha all got plenty of scorn from me, there was one guy, a shortish, squat, quiet left fielder, that seemed to kick the Mariners’ hindquarters every time they played. 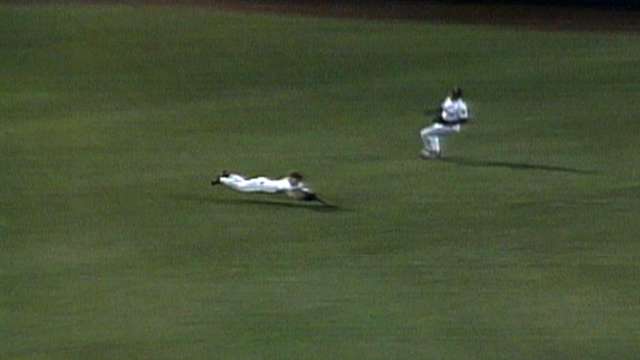 Rusty Greer beat my team seemingly every game. He didn’t hit a lot of home runs, particularly for his era, but every time I watched it seemed he was on base, hitting a double, diving in left to rob Edgar Martinez of a hit, and so on. His all-out style and feverish pace were balanced by an implacably stoic demeanor, and he drove me crazy. The profanities and tirades the walls of my childhood home absorbed due to Rusty Greer would have shamed a sailor. 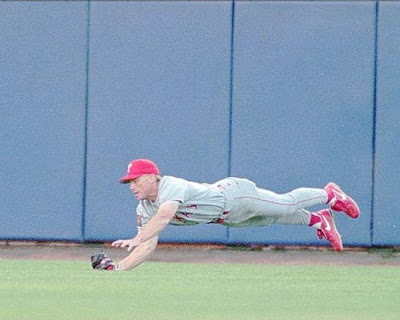 Looking back now, it’s interesting how my hatred aligns with what was, in fact, an excellent career. Despite only playing roughly seven full major league seasons Greer accumulated just shy of 20 WARP. He balanced an excellent eye (.387 lifetime OBP) with high contact (12.7 K%) and sprayed doubles all over the park. While metrics pegged his defense somewhere between “ok” and “yikes” he had a penchant for diving catches, particularly on grand stages.

He was not a star, nor a scrub. In an age where player’s deeds forced people to cast aside the idols of their forefathers, he was simply a good baseball player, one that helped the Rangers win three division titles, and made a skinny kid in the Puget Sound practice his profanity. That kid was raised to know better too, so I give Rusty Greer a lot of credit. He made me fail.

The no. 2 overall pick is not supposed to be underappreciated. He might be good; he might be a bust; but it's hard to be underappreciated when you were deemed the second-best available amateur player in all the land. He had the tools, he had some measure of performance, he had the good face, so anything good he did was expected. He was also a teenager, or at most a junior in college, with pounds to add and skills to develop and a brutal minor-league system to survive, so anything bad he did was also expected. 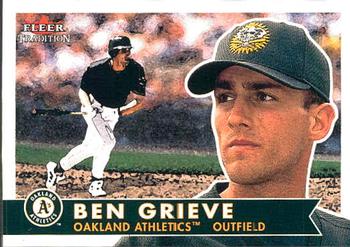 And yet I am here to tell you that Ben Grieve, who, all things considered and in the harsh light of today's defensive analytics, was probably something close to a bust, was also underappreciated. Grieve won the Rookie of the Year Award in 1998, making the All-Star team along the way, put together three straight years of declining hitting, had a small bounceback, missed much of his walk year with an injury, went to the National League for 15 percent of the salary he'd made the year before, got traded in August, failed to make a Pirates team that would go on to win 67 games, and was not in baseball on his 30th birthday.

But like I said: underappreciated. Because here's the thing Grieve did in his heyday for the A's: walk, strike out, hit for pretty good power, and ground into double plays. Here is what Ben Grieve did not do: visibly care very much about the strikeouts or double plays. Or, hell, the home runs and doubles. Grieve was not emotive. He never busted a bat over his knee after a backward K, never slammed a helmet beyond first base after ending yet another inning with a tapper to the second baseman, never cartwheeled from base to base on a dinger. Fans want the big emotions, especially at the stadium. Josh Reddick, pretty much Grieve's polar opposite in right field (plus defense, impatient at the plate, loud as hell), was wildly popular with more or less the same fans who shunned Grieve, though their total production, while tilted toward Reddick, didn't differ enough to truly explain the gap in love.

Well, I loved Grieve. I aspired to his talent (I had none), his implacability (I run to the Reddickian on the field, on the court, anywhere there's competition), his body (Grieve: 6-foot-4, 200 pounds of lean muscle; me: Nick Punto, but lumpier), and I remain convinced to this day that those who didn't enjoy him while they could were missing out on a sort of quiet joy, not the joy of bat flips and headlong dives, of wild and careening and chaotic passion, but rather of introspective, contained, genuine competence, a set of qualities I daresay we could all do with a little more of these days.

It left the hand at 89 and went belt-high to Ramirez, in the zone, where it met the wood stick with a loud tthwack, just like you hear in those boxing movies. The ball immediately hit the ground in front of the plate, bounced up in the air where Joe Saunders tried to grab it just for a split, split second–but then Saunders quickly realized that it was just out of his reach. Oh hell. It wasn’t worth it, anyway.

As it dribbled up the middle of the infield, I was watching. I thought about that time he grabbed the gapper Kyle missed in Felix’s perfect game, and I thought about that dinger he hit in Arizona which made him so excited he said f— in earshot of the ROOT Sports microphones. I thought about when he grew that stupid moustache, or the times he would praise Fi-Fi, and then I thought about the stupid phiten necklace he wore that made me want to think he was trolling, somehow, but probably even your closest relatives are skeptical of the chemicals they put in the water from time to time as long as you don’t talk about it in front of their kids.

I thought about the trade that brought him to my team and Franklin Gutierrez, and I thought about Justin Smoak, and I suddenly remembered what Dustin Ackley’s batting average was. The ball bounced over the pitcher’s mound. Sure, it was June, but by then you knew that the next few months would be a waste of time. Heck, they might as well just take the third-to-last spot in the AL to earn the second in June. Draft another teenage right-handed power bat ready to fracture his neck. Again.

But suddenly the ball bounced a few more times and as it made its way through the infield it looked like it was going to roll right up through the middle, but then he was there, popping his head on the screen like the old lady in that David Robinson GIF. The ball met his glove, as was its wont at that time, and he didn’t even transfer it to his throwing hand he just made it go there where he got a quick out and then kept running like he was waiting for the finish line on the Final Day. He was standing in right field.

Later he ran back to the dugout, past Endy Chavez and Jason Bay and Kendrys Morales, past Jesus Sucre and a young, flippant Nick Franklin. He looked up at a struggling Tom Wilhelmsen, and then he slapped gloves with a healthy Michael Saunders and I was like please, please not too hard. But Ryan never looked like anything he did was hard.