Luis Sojo’s Wikipedia article begins by describing him as “not classically athletic,” and continues to damn with faint praise from there, noting that he was a good contact hitter for someone who was perpetually in an 0-2 count, and “a competent base runner.” When people recall the Mariners greats of the 1995 team, Luis Sojo’s name does not often find its way onto the list. Even non-Mariners fans know about The Double, but few know about the double that preceded The Double.

On October 2, 1995, the Mariners faced the California Angels in a one-game playoff to see who would advance to the ALDS. In a pitcher’s duel between Randy Johnson and Mark Langston, the Mariners would hold a 1-0 advantage going into the bottom of the 7th, as a child might hold a brimming cup of Hawaiian Punch while walking over a white carpet. Bases loaded, two outs, and Luis Sojo–who’d killed a rally earlier by bouncing into a double play and getting juice everywhere–was the batter. Sojo reached for a pitch off the plate, breaking his bat in the process, and sent a sharp bouncer to first base, where Gold Glover J.T. Snow… 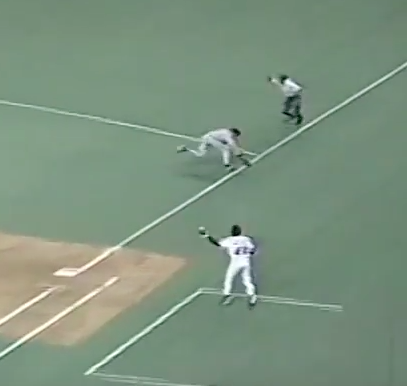 …missed it. By inches. The ball snuck into the corner of the Kingdome, underneath the ratty bullpen bench. Mariners broadcaster Rick Rizzs tried valiantly to keep up with the flurry of bodies crossing the plate, but then Langston’s relay home was offline, allowing Sojo to score the most improbable inside-the-parker ever. HE SCORES! EVERYBODY SCORES! hollered Rizzs–himself underrated as a broadcaster, toiling as he has in the shadow of fan favorite Dave Niehaus for his entire career. 5-0 Mariners. This hit, this broken-bat swinging bunt, was somehow equal to a grand slam.

I think about this image a lot: 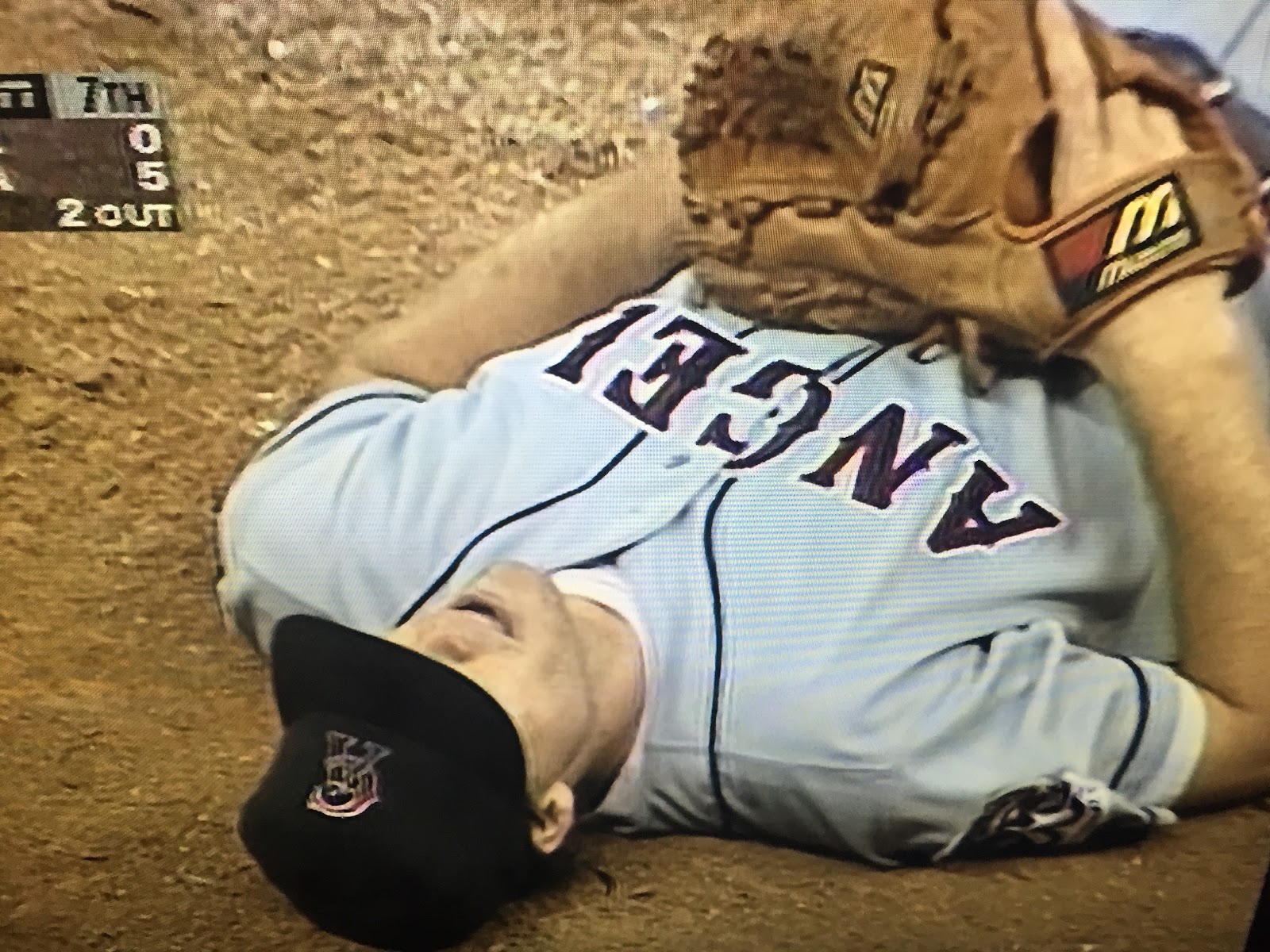 If this was a yoga move, it would be called Mariners’ Pose. It’s an image that sums up, in a lot of ways, the experience of being a Mariners fan for the past ten, twenty, thirty years. But Luis Sojo yanked the handle on the MLB machine that day and it gave him straight gold bars, and in doing so he gave myself and every other Mariners fan a chance to experience the other side, for once. To be the reason an opposing pitcher was lying faceup in the dirt, instead of the dirt itself.

And what’s amazing is this isn’t the only time in Luis Sojo’s career he did something like this. His single in the 9th inning of the 2000 World Series pushed the Yankees out to a 4-2 lead and secured the decisive Game Five win. Sojo’s year-to-year statline looks like it was drawn with a Spirograph, but he authored two of the biggest hits in his respective franchises’ histories, and did it all with the easy, natural athleticism of a side table, and for that, he deserves our appreciation.

By the way, the walkoff interview for Game 5? Bernie Williams.

Next February, hundreds of live-armed, low three-quarter left-handers will head to spring camp hoping to get their deliveries on line for even a few months as sharp as what Damaso Marte had in 2002 and 2003.

10 years after being signed as an amateur at age 17, and on his fourth organization, Marte suddenly became as nasty as every sweeping lefty pounding a low-90s fastball (this was fast at the time) and wipeout slider looks like they should be. Over those two peak seasons, he posted a 217 ERA+ over 140 innings, struck out batters at a 28.7 percent rate that would slide in comfortably along those of elite relievers of this current strikeout-crazed age, and planted the seeds of an 11-year major league career that seemed inconceivable when he was as old as 26.

The extremely off-center angle of TV broadcast cameras of those days always made it look like Marte’s pitchers were sweeping from the edge of the left-hand batter’s box to the opposite end of the right, and the helpless swing-and-misses only supported this naive notion. For a good while of his brilliant peak in Chicago, Marte occupied baseball’s equivalent of a backup quarterback role: the setup man good enough for everyone to clamor that he become the closer.

Despite the acclaim Marte earned, the remarkably poor timing of how he became unappreciated is the real fascination. Marte earned over $21 million in salary, has two World Series rings, and yet mostly has stories of being reviled by the two teams he helped win those rings. The Yankees one is easy enough to figure out. They paid Good Reliever Market Value for him and he was borderline unplayable or injured for three years except for those 5 2/3 lights out innings in the 2009 playoffs.

The White Sox half is more colorful. After enjoying his breakout on the South Side, being the bullpen savior for great offenses in search of a pitching staff, he suddenly found himself reduced to secondary status when a legendary staff popped up around him. He threw 1 2/3 scoreless innings in a 14-inning marathon in Game 3 and was credited with the win, but was overshadowed by a drunk Mark Buehrle facing and retiring one guy for the save, possibly because everyone knew he’d gone forever once the series ended.

As Marte battled control problems down the stretch of the second half of 2005, the White Sox coaching staff lost patience with him as publicly as you can possibly imagine.

"Just give us the same [bleeping] fastball and breaking balls you have for the first three years of your career and we'll go from there," pitching coach Don Cooper told Mark Gonzales of the Chicago Tribune. "But the way he's thrown the last two nights, we can't come back and anticipate that he's going to be our late (game) lefty. He's got to go out and earn things again. And regain his No. 1 approach, confidence and the way we all know he can pitch, and then go do it."

"Seeing what he has and what he can do and seeing how much we lean to him to win, that makes you angry," said Guillen. "I don't like when Marte goes there and doesn't want to attack people. That's all that bothers me."

A week later Marte was sent home for showing up late, right around the same time Guillen questioned whether he was faking an injury with two weeks before the end of the season, which is enough to make you wonder how he made the postseason roster at all. The famous El Duque escape of a bases loaded, none-out jam in the ALDS in Boston was created by Marte allowing all three hitters he faced reach base. His World Series redemption was the only other appearance of his Sox career. Guillen would later make reference to packing Marte’s bag for him to kick him out.

Despite their gruff exteriors, Guillen and Cooper have led careers defined by their players’ devotion to them. It’s likely he very much earned their disapproval, and did become more difficult than his talent was worth and the consistency he showed. But this list is about underappreciated players, not undeservedly underappreciated players. 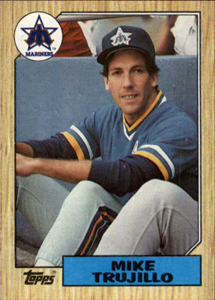 I don’t remember Mike Trujillo. I was eight when he was thrown into the August trade that left us the grinning visage of Rey Quinones. I don’t remember any of the dozens of wood-grain Trujillo cards I must have owned, cards to sort through to find other cards: pictures of a long-faced man, gaunt, uncomfortable, hair curling over the ears like a shrug. The Mariners of my childhood were the skirmishers, the cannon fodder, sent out to soften up the future in preparation for better times. They were elementary classroom goldfish, doomed but necessary, best left unnamed.

Few players better embody the sort of dogged mediocrity of baseball than Mike Trujillo: 12-12 record, 5.02 ERA, swingman-slash-long reliever. He was an ill omen, the presage of a misspent evening, the white noise of the baseball ignored on the radio on busy autumn days. The teams he played for went 28-55 in the games he made an appearance.

I don’t remember how I did on the days Mike Trujillo pitched, either. Eight years old: was I reading Garfield books in front of the fireplace, my parents watching Masterpiece Theater in the periphery? Playing Monopoly against myself at the kitchen table, rolling for all four players? Drawing maps of my front yard? Those days are lost to me now, a pleasant haze, dead except whatever formative effects they had on me. Maybe I was sorting through Mike Trujillo cards, marking time sliding the cardboard from one hand to another, a cheap guiro.

But the strange thing about baseball, one of them, is that Mike Trujillo’s terrible days, his 2.1-inning, 3 ER starts are immortalized, the evidence of his hard work and his worries and the days he couldn’t lift his arm above the shoulder, all of it. I will forget writing this piece, you will forget reading it, the internet will swallow all our time and our lives will trickle out of the consciousness of our grandchildren. But Mike Trujillo will survive us. Mike Trujillo is a god, a flawed and pathetic immortal, but also an immortal. His photograph still sits in thousands of attics and garages, mine included, a parasite in our childhood nostalgia.

And beyond that: one day, for no reason, Mike Trujillo was the man who threw a one-hit shutout, a first-inning squib by Jamie Quirk followed by 8.1 innings of hitless ball. For one day he was the best player in an entire professional sport. I don’t remember it. No one except Trujillo does. But it’ll never vanish completely.