Try as they might, the Blue Jays just can’t retain a healthy pitching staff. Bo Schultz underwent season-ending Tommy John surgery in March, Aaron Sanchez was felled by a blister on his pitching hand, Cesar Valdez suffered a bout of right shoulder inflammation, and a comebacker spoiled Taylor Cole’s major-league debut with a right toe fracture.

All told, they’ve utilized 12 different starters in 2017 and have to find creative ways to last through the remaining seven weeks of the regular season without burning out their bullpen or slipping too far back in the Wild Card race. On Saturday, that led them to rookie right-hander Chris Rowley, who entered his big-league debut under unusual circumstances.

Rowley, 27, signed with the Blue Jays as an undrafted free agent in 2013. He hurled 32 2/3 innings in rookie-ball but entered a full-time, five-year commitment to the United States Military Academy when the season concluded, and put his dreams of playing professional baseball on hold for two years while he split his service time between the Army Field Artillery School in Oklahoma and multiple assignments in Bulgaria and Romania.

After 30 months of service and the occasional game of catch with his Senior Medic, Rowley received an exemption from the rest of his service time in January of 2016. He was placed on Individual Ready Reserve and returned to the minor-league circuit for a 31-game stint in High-A Dunedin, where he quickly dusted off his rusty mechanics and emerged with a 10-3 record and 3.49 ERA in 123 2/3 innings. He hurtled through the Blue Jays’ remaining affiliates in 2017, earning a collective 2.29 ERA, 2.0 BB/9 and 7.6 SO/9 through 106 1/3 innings with Double-A New Hampshire and Triple-A Buffalo before receiving a call to the majors.

Taking on big-league competition was another matter altogether, and not just because Rowley was up against hitters of a higher caliber. His call-up also identified him as the first West Point graduate to appear in a major-league game. “It’s something that I’m not sure I really understand the magnitude of,” he told reporters prior to his outing. “I’m not sure I ever will.”

If Rowley was experiencing a high level of stress, however, he masked it well. He was poised from the get-go, wielding five pitches to induce two quick outs in the first inning and working his way around the strike zone with a slider-sinker combo to whiff Josh Harrison for the third out. 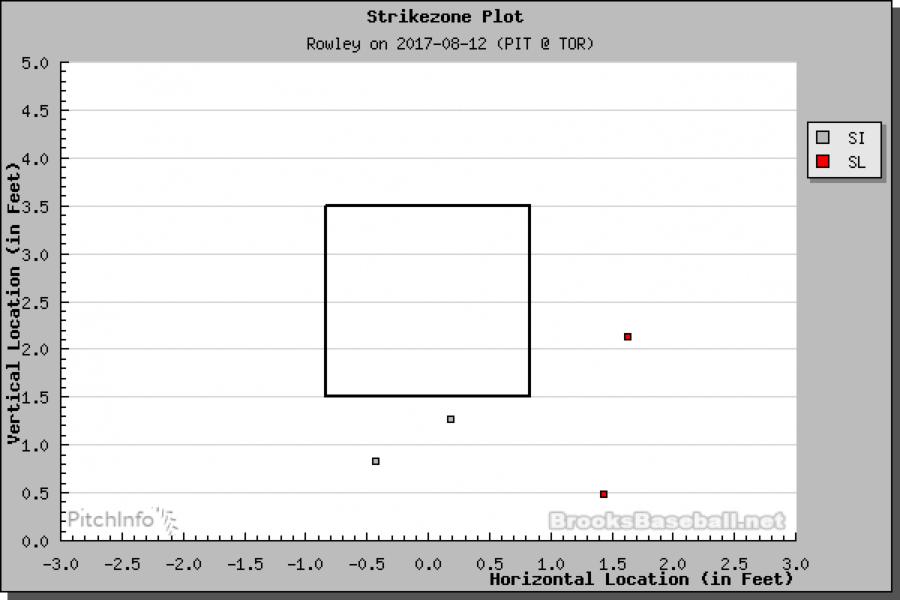 Things didn’t work out quite as smoothly in the second, when Josh Bell lined a leadoff triple to center field …

… but the righty collected himself long enough to gather two outs and limited the Pirates’ damage to a Jordy Mercer RBI single.

The next three innings went quickly. Rowley settled into a groove and prevented the Pirates from reaching beyond first base, needing just seven pitches to retire the side in the fifth. His fastball danced around 90 mph at times, but he exhibited a clear preference for his off-speed stuff and habitually returned to his sinker late in the count. Manager John Gibbons eventually pulled his starter in the middle of the sixth inning, capping Rowley’s debut at five hits, a run, and three strikeouts in 5 1/3 innings after the right-hander put runners on first and second with one out.

Rowley soaked in the standing ovation and, three innings later, his first MLB win as Toronto backed the rookie’s efforts with a seven-run spread. He may not be the be-all, end-all solution to the Blue Jays’ pitching woes just yet, but at least for now, they couldn’t ask for more.

Thunderstorms threatened the Nationals-Giants series this weekend, darkening the skies on Friday and prompting a three-hour delay when the teams finally met for their series opener on Saturday evening. Even the grounds crew’s best efforts couldn’t have prevented this, however:

Bryce Harper was sent sprawling after his left foot slipped on the first base bag, prompting momentary flashbacks to the moment when we lost another of baseball’s most heralded players on a slide gone wrong. Aside from a deep bone bruise, he thankfully didn’t sustain any lasting damage, though the Nationals figure to be without their star slugger for at least 10 days, if not longer.

The incident didn’t slow the Nats down for long. Ryan Zimmerman and Daniel Murphy rebounded with an RBI double and single, respectively, and Adam Lind’s RBI double clinched Washington’s two-run lead in the sixth.

Whatever the case, the MLB home run leader padded his total with his 40th, 41st, and 42nd dingers this weekend, becoming the first major leaguer to reach 40 home runs in 2017, tying franchise leader Gary Sheffield’s single-season home run record, and collecting home run no. 250 of his eight-year career.

The first homer arrived in the sixth inning of Friday’s 6-3 win over the visiting Rockies, a solo shot off Jon Gray that landed in the center field stands:

Stanton followed up his league-leading blast with another one on Saturday, this time penalizing Jeff Hoffman for a 1-1 changeup in the fourth inning:

The three-run, 463-foot shot propelled the Marlins past the Rockies to take the second game of the series, and they returned in full force on Sunday for the sweep. Stanton stung German Marquez in the third inning, tying the score and Sheffield’s franchise record on a 359-footer that pinged around the right field stands before dropping just past the foul pole.

With 250 home runs to his name (and approximately 194 home run machine celebrations), the Marlins’ slugger stands out as one of the youngest and fastest players to reach the career milestone.

.@Giancarlo818 becomes only the 12th player in @MLB history to reach 250 HR by his age-27 season. https://t.co/yYu2B5MwoD pic.twitter.com/vakK7ldKcv

David Peralta may not be the fastest or most powerful player in the Diamondbacks’ lineup, but he still has a few tricks up his sleeve. On Saturday, one of those tricks was an eighth-inning inside-the-park home run, during which the left fielder cleared the bases on a 15.59-second dash to avoid Alex Avila’s tag at the plate.

The D-backs did most of their damage during the fourth inning, but the extra effort was appreciated. It was Peralta’s first career inside-the-parker and a fitting cherry on top as Arizona beat the Cubs, 6-2.

Things got complicated for the Mariners on Saturday when they attempted to relieve the Angels of a runner in scoring position. In the top of the ninth, with a runner on second and no outs, Kaleb Cowart whipped an 0-1 curveball back to the mound, where Mariners right-hander Christian Bergman gloved the ball and flipped it to shortstop Jean Segura. Segura caught Martin Maldonado in a rundown between second and third base, and Kyle Seager completed the play with a toss to second baseman Robinson Cano to catch Cowart on his way to second.

Despite all the trouble the Mariners went to for the outs, they couldn’t capitalize on their own scoring opportunities in the bottom of the inning, and dropped their third consecutive game to the Angels with a 6-3 loss.

There was a smorgasbord of defensive gems to feast on this weekend, ranging from the incredible …

… to the downright illegal.

Adrian Beltre’s evasive maneuvers didn’t yield any benefit for the Rangers, but who knows? It might come in handy for a promotional night later this year.

Since you last checked this column, the Mariners, Twins, and Angels have all taken a turn in the second Wild Card spot. Entering Monday, the Angels still cling to a half-game lead after completing a four-game sweep over Seattle, but will need to stay on their toes with four other teams within two games of playoff contention. They won’t be able to increase their advantage during Monday’s scheduled off day, however, giving the Royals a chance to make a play for the spot when Jake Junis (4.76 DRA, 105 cFIP) takes on the Athletics’ Jharel Cotton (7.30 DRA, 116 cFIP) to finish off their eight-game road trip (10:05 ET).

There’s considerably less drama over in the National League, where every division but the NL Central appears to be sewn up. The Cubs will send Jose Quintana (4.16 DRA, 92 cFIP) out against the Reds’ Asher Wojciechowski (4.22 DRA, 105 cFIP) on Monday as they attempt to extend their lead over the second-place Cardinals (8:05 ET). Over in the NL West, the Rockies’ Chad Bettis is set to make his first start of the season. Bettis delivered a 4.63 DRA and 104 cFIP through 186 innings for Colorado in 2016, but was out of commission for nine months after undergoing treatment for testicular cancer (8:40 ET).