This was a double-switch, defined as a substitution in which:

Revere took over center field from Maybin, but Revere batted second instead of first, as Maybin had. Franklin, the new leadoff hitter, took over left field from Young, the no. 9 hitter, who in turn bumped Calhoun, who’d been in the no. 2 spot. So it was a double-switch.

What made this double-switch unusual is that it occurred in Texas, in an American League game hosted by the Rangers. Double-switches are usually associated with National League teams and the pitcher’s spot in the lineup.

This brought two questions to mind for me. First, how weird is it to have an American League manager call so many double-switches? Second, how has modern roster construction affected double-switches? The first question is fairly straightforward. The second one is less so, but follow along with me here.

As we know, bullpens have grown over the years, resulting in pitchers gradually dominating 25-man rosters. Take, for example, the Twins. As I write this, they have 13 pitchers on their roster. They’re an American League team, so they have nine batting order spots to fill. That leaves them with only three players on the bench: catcher Chris Gimenez; Ehire Adrianza, who’s played every infield position and left field; and Eduardo Escobar, who’s played second, short, third, left, and even caught an inning. That doesn’t give manager Paul Molitor a lot of options for substitutions. A double-switch involving, say, Gimenez and Adrianza, will leave only one position player, Escobar, on the bench.

The change in relief usage, and therefore bullpen size, has been sufficiently abrupt that I didn’t bother retrieving a lot of data. I compiled a list of double-switches by team from 2007 to 2016—10 years in total. You’re going to say that’s not enough to identify major trends, and I’m not going to argue with you. As you’ll see, I’m not going to claim there are major trends anyway.

I started by looking at the prevalence of double-switches by league. My metric here was average double-switches per team. I couldn’t use league totals, since the Astros changed league sizes when they moved in 2013. Here are the results: 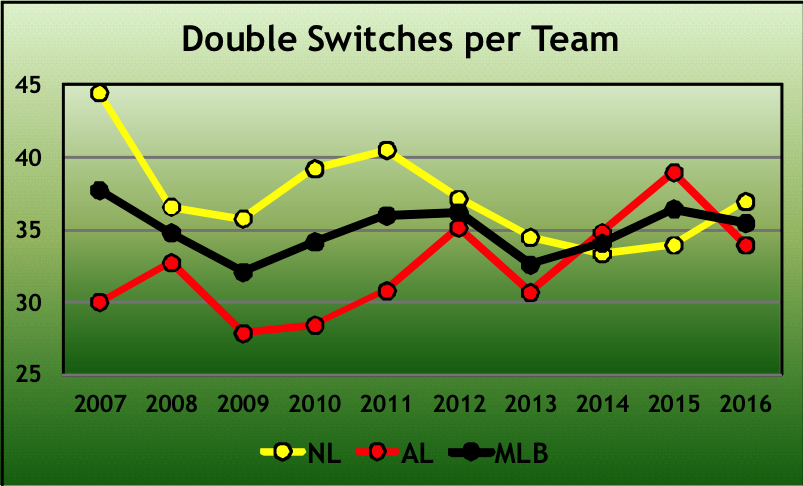 At this point, you may be thinking, “Boy that was easy. No real change in double-switch utilization. I got out of this one in barely over 700 words!”

No such luck, sorry.

I broke that down even further, looking at the tendencies of individual managers. As noted, the Angels under Scioscia love the double-switch, with 189 over the past three seasons. That’s a lot, but it’s not the most over the 10-year period I examined. From 2010 to 2012, Jim Leyland (another American League manager!) called 196 for the Tigers. The low-water mark was by a National League club, the Pirates, who had just 28 from 2008 to 2010 under John Russell. Not that I’d argue there’s a correlation, but those Pirates averaged a 62-100 record during their double-switch-phobic seasons while Leyland’s double-switch-philic Tigers averaged 88-74.

Those teams were extreme. I decided to categorize each team’s double-switch usage, putting all 300 team seasons into one of three buckets:

By those definitions, there were 63 teams that called few double-switches, 60 that called a lot, and 177 in the middle, roughly equal to a 20-60-20 percentage distribution.

What’s interesting, I think, is how those proportions have changed over time: 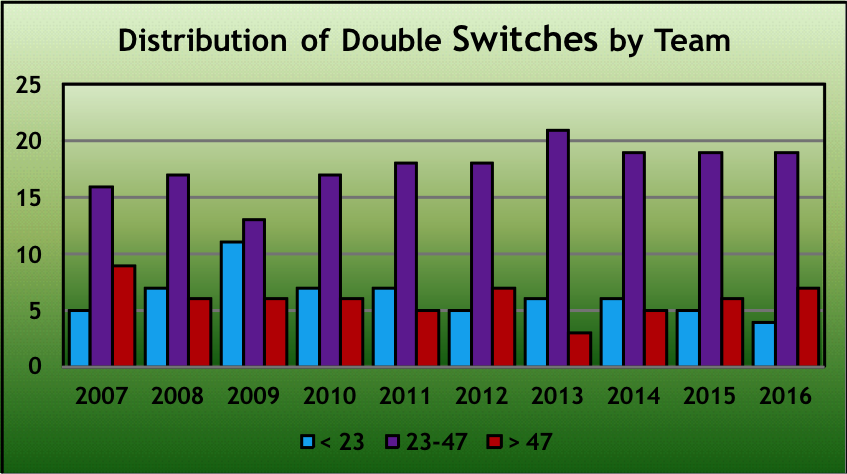 Look, I get it. We’re talking about double-switches, which are more lineup device than something tactical like stolen bases or bunts. But looking at a graph like the one above, doesn’t it seem like creeping groupthink? The Scioscias and Russells are become rarities. There just isn’t that much variance when it comes to double-switches in recent years

I’m not going to claim that fans are being robbed of the excitement of watching new players come into a game but not bat in the same position as the players they replaced (especially given the 18-minute mess that Molitor's recent double-switch created). But I am saying that maybe this is an area where the consensus opinion on when to double-switch—not too hot, not cold, just right—is rippling through the majors.

Last week, Russell A. Carleton recounted the emergence of the one-inning reliever as the norm in contemporary baseball. Like one-inning relievers and 100-pitch limits for starters, managers seem to be converging on a consensus use of double-switches, pulling in the outliers.

Thanks to Eric Roseberry for research assistance.