On July 25, the Dodgers played the Twins, in Los Angeles. The game featured an 18-minute delay after the umpires and Twins manager Paul Molitor got mixed up over a double-switch in the sixth inning. It wasn’t the most important game the Dodgers have played lately, or even the most interesting. But it did show us a few things.

By my count, Yasiel Puig was announced as the batter two hours, 39 minutes, and 15 seconds into the game. This is an account of what and who followed. 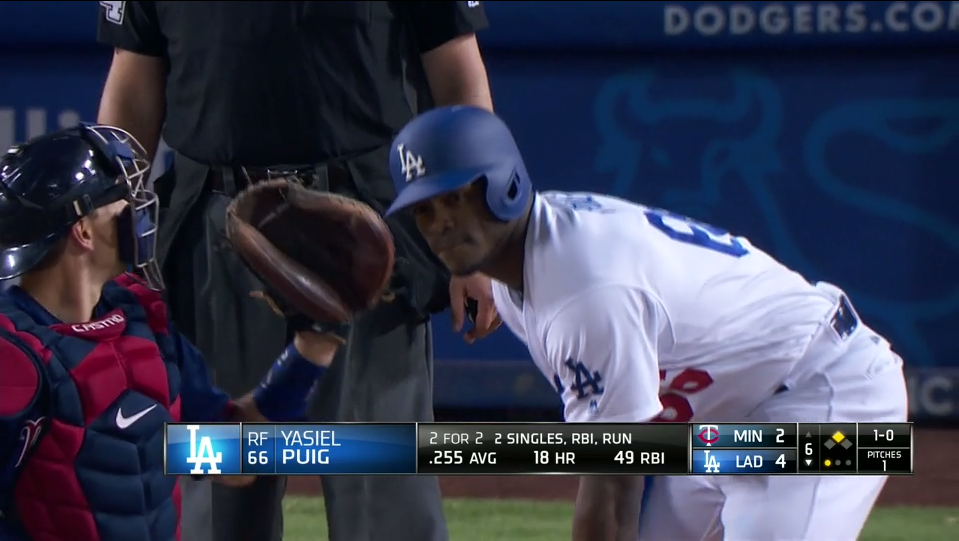 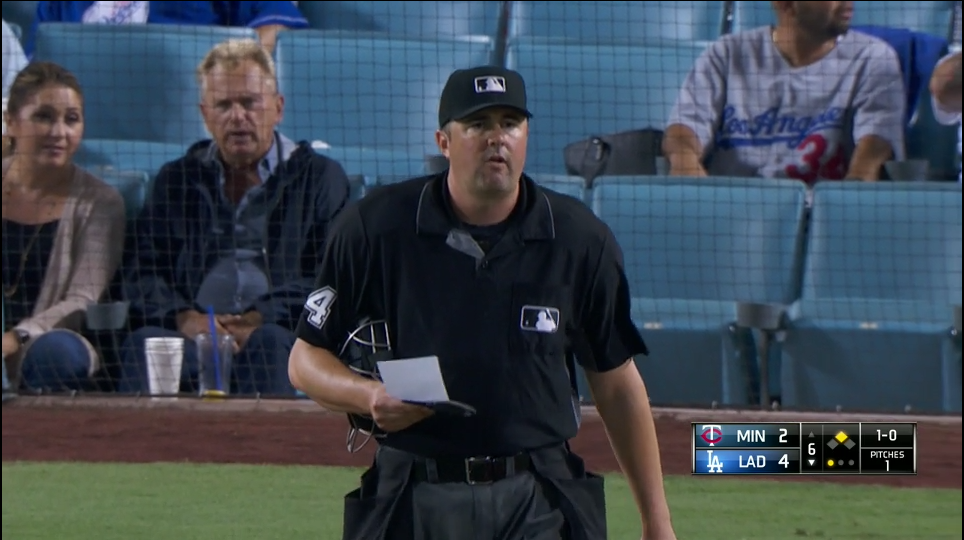 Pat Sajak is the host of Wheel of Fortune. He’s right there, drinking lemonade! Hi, Pat. The thing about Pat Sajak is that he’s famous in precisely the way most baseball players are not. He’s recognizable, even if you couldn’t remember his name until you read it just now. If you asked a stranger to conjure a picture of Pat in their mind’s eye, they could probably do it.

Now ask them to conjure a picture of Chris Taylor. He has … teeth? Hands? Your stranger has heard his name and might even know his stats because he’s playing so well, but Chris Taylor’s face is the least recognizable part of him. We share that with Chris. Of course, Sajak is relatable in his own way. His face may jump out on the broadcast, but he’s as confused as we are by Molitor’s “double-switch.” Stars really are just like us.

2:44:24 — A dad with a mustache explains what’s happening to his adult son

We’ve all had the experience of trying to explain baseball to those who are less familiar with the game than we are. It’s an act of faith. They put their trust in us to peel back the layers and expose something true; we put our faith in the action on the field to bear out our explanation. That's an out. He was safe. We were robbed! Only, sometimes resolutions drag.

At first, you buy in but you're an adult. You pay taxes and don't have to sneak cigarettes anymore. You've realized your parents are fallible. That’s when trust begins to break down. It’s not that I don’t think you know what you’re talking about, Dad. It’s that I suspect that if it were really as simple as you're making it out to be, we’d be done by now.

We tend to experience baseball in what we might think of as “fan time.” This replay took X seconds; I spent Y minutes getting a beer; another Z hours of extras?! Baseball players are used to waiting. They wait around all the time. They wait in the on-deck circle; they wait for a pitch to be delivered; they wait for the ball to be hit their way. They sit in the dugout, doing nothing, or at least, not doing baseball. They learn to amuse themselves while they wait.

Yasiel is dancing. He’s shaking off a few minutes of boredom; he’s resetting the moment to something more normal. When you get past how annoyed you are at the break in the action, at how much “fan time” has passed, these long delays are only notable because suddenly there are more than 20 people waiting all at the same time.

At one point, this kid can be seen asking an unseen companion "what’s happening?” And while I’m being a bit unfair picking on a child who may have hoped but surely did not count on being noticed on the broadcast, we might answer his question with a “what’s happening?” of our own and a telling glance at his hat.

Once while on a family vacation, we decided to play Trivial Pursuit. My mom and I were on a team together. We weren’t the best sports. There was an incident involving yurts and the center space and an obnoxious fist pump. You can know a great many things, but we usually prefer when people aren’t so showy about it. Mom and I aren’t allowed to play Trivial Pursuit with the family anymore. I don’t know how this app of his works, but I wonder if Bob faces similar resistance.

A good home broadcast has to strike a delicate balance between telling the truth and letting the fans have a bit of fun. Molitor isn’t their guy; he can be goofed with, but softly. The Dodgers' booth can’t say, “This dummy is used to managing in the AL, can you believe it, what a dumb dummy,” but they can remind the audience at home that Molitor normally relies on the designated hitter to avoid these sticky switches. What they’re doing sounds like mercy, or at least grace, but it’s really pointing out that AL managers are a bunch of philistines. It’s got a bit of vinegar. “Fans are starting to get restless now.” Well sure they are; they’re getting held up by a dope. Just don’t say so.

Tommy Lasorda’s signature is visible on the puppet’s lower back (?), so we have learned two things. First that he signs his name “Tom” not “Tommy” and second, that this is an object he held in his hands and did not destroy “on accident” to spare others. Later, I learned that Tommy Lasorda’s Wikipedia blurb is “Thomas Charles Lasorda is a former Major League Baseball player who has had a lengthy career in sports management.”

Lasorda was inducted into the Hall of Fame in 1997. His number is retired by the Dodgers; he was Manager of the Year twice. He has two World Series rings. I guess that did take a while.

“How … how much am I expected to hustle here?”

Puig is doing what might be described as a half-Halpert; he is joined in the frame by a full-Halpert. 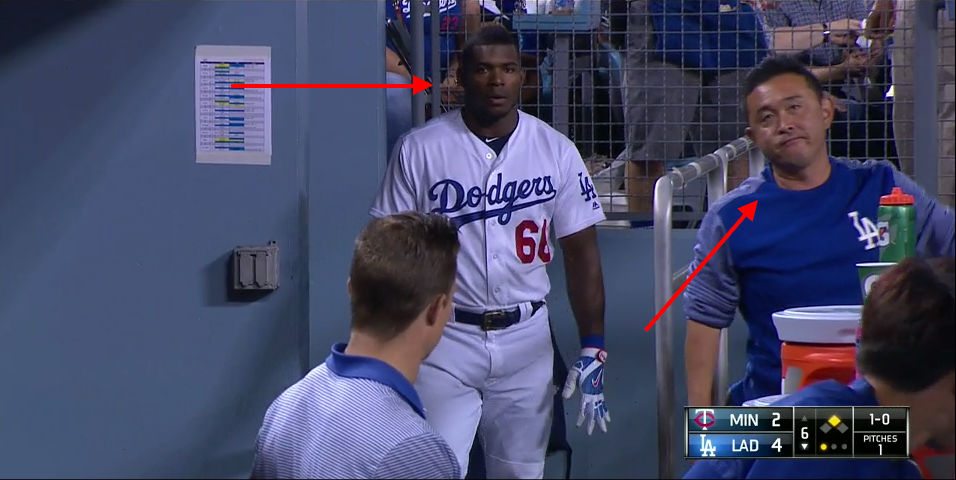 Then, Yasmani Grandal. And Luis Avilan. Both full-Halperts. 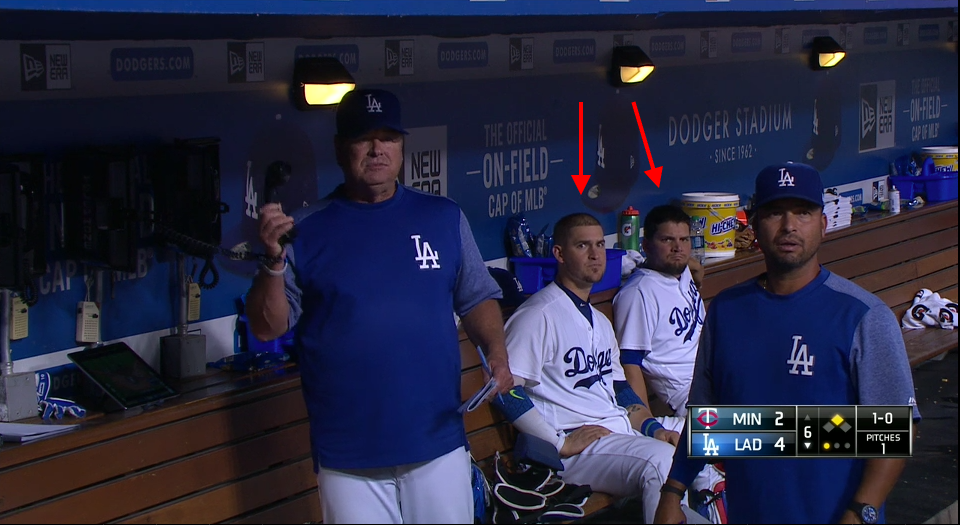 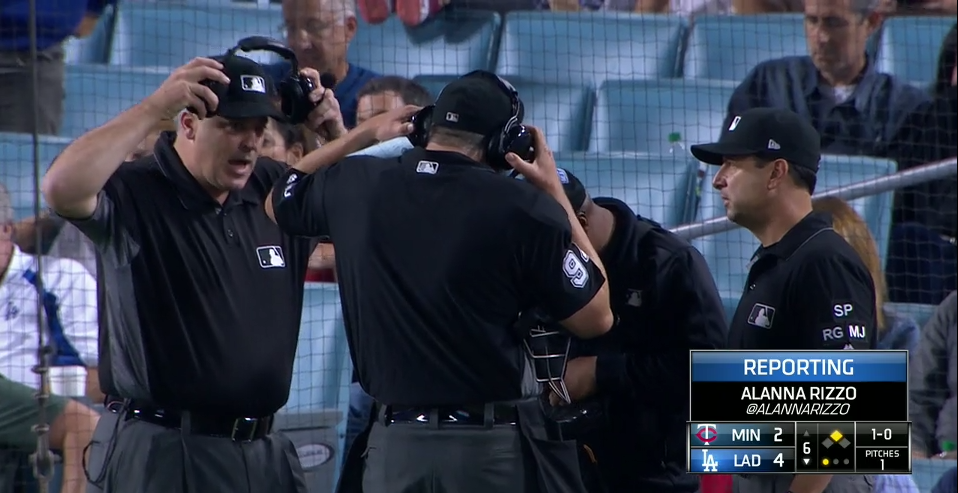 The most disappointing thing about this delay is the realization that you probably can’t get away with much anymore. We want baseball to be weird, and it is, but it can’t be too weird. We don’t let it. These guys spent almost 10 minutes talking amongst themselves, then got on the phone to make sure. There are so few official patsies these days.

2:55:41 — “The longer this goes, the less I want to get Bob Geren’s description, just gonna be honest with you. Because it’s gonna be really multi-layered.”

Bob is your friend who knows the names of all the dragons in Game of Thrones, but not in a helpful “There’s too damn much going on in this show to keep track of and come on! Who the hell is this dude?” way. More in a “Bob, this is the third party you’ve ruined since the premiere. No, I don’t care that you’re excited!” way. In that way.

2:56:11 — We learn that the Dodgers have numbered easy-sit chairs for the rail 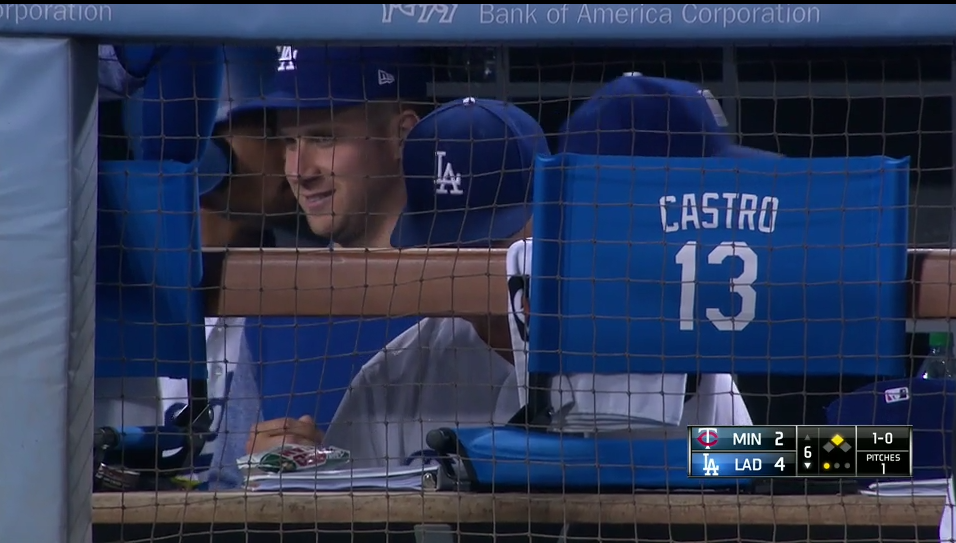 In the coming years, MLB teams will spend a great deal of money on players, while systematically trying to spend much less. The 2017 MLB Collective Bargaining Agreement includes additional surcharges on club payrolls above the luxury tax threshold; international bonus pools have a hard cap. It’s an open question what clubs will choose to spend money on before they pay minor leaguers more, but I think we have part of the answer. Chairs. Customized bench chairs. With names and numbers on them. For comfort and what the hell else do we buy?

This gentleman is showing his friend Issue 3 of Franchise Magazine, which: "Continues our goal to highlight basketball culture from around the world. For the cover we welcome back Pete Deevakul who utilizes basketballs from Tachikara Japan for a unique twist on Ikebana.”

Sounds interesting. That he brought reading material to the game indicates he anticipated a delay was possible, but that he was not discouraged from attending. I wonder what a ballpark library would do to alleviate perceived pace of play issues.

It’s important to take moments for yourself, and just vibbbeee. 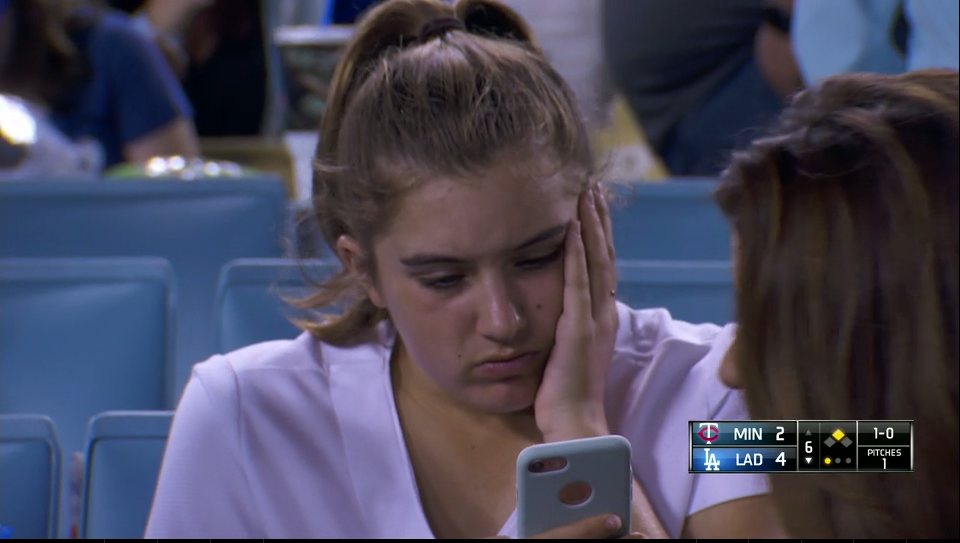 Have you ever thought about what forever would feel like? Are you thinking about it now? 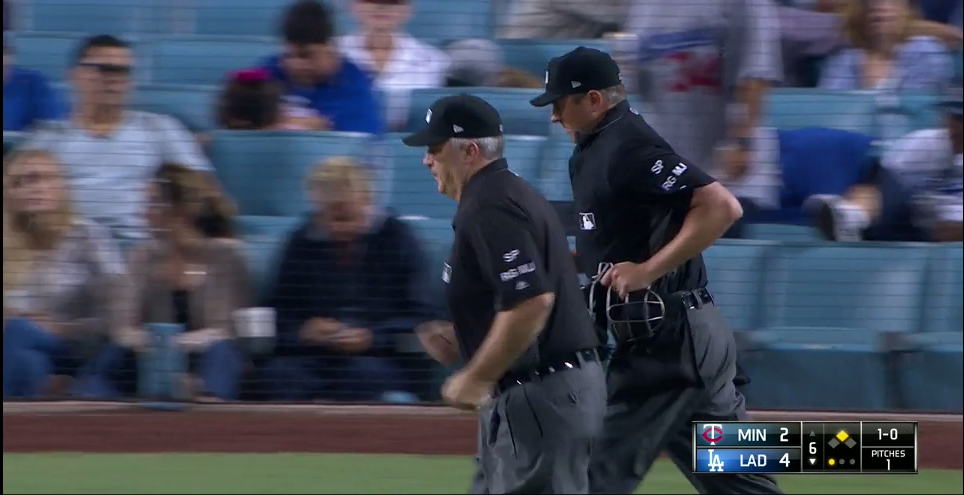 Oh, sure, now you speed along.

3:01:50 — Many people try to explain what happened as the action resumes 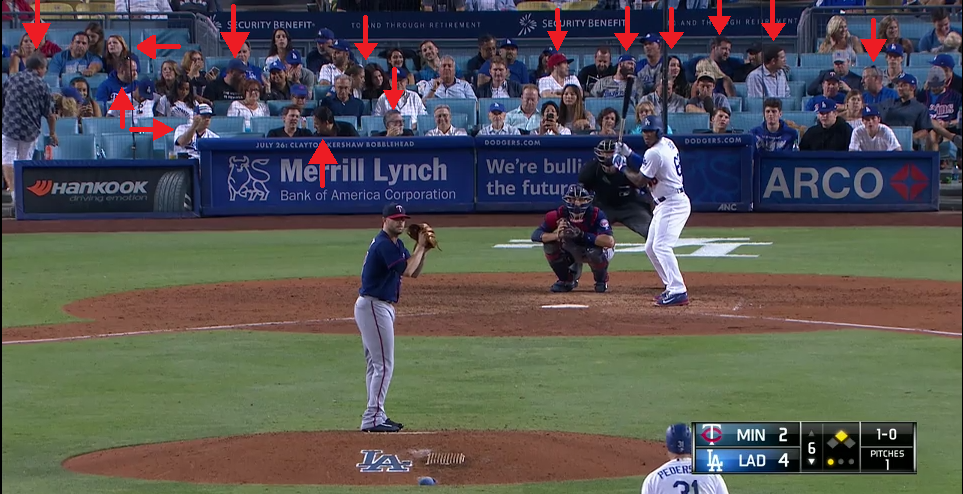 As Puig steps back into the batter’s box, Dodgers announcer Joe Davis remarks, “It’s a small, fundamental problem the game has where there’s no way to let the crowd know what’s been talked about.”

And he’s right. It’s sort of remarkable that these folks are still here. Think about how badly their time was quietly disrespected and for how long. They don’t know how to account for the 17 whole minutes of their lives! They’re bound to be distracted for at least the length of this at-bat, if only because we have a human impulse to understand what the hell happens to us so we can tell stories later. It might be why we tell stories at all.

Puig waited 18 minutes to resume his at-bat. He took a pitch, most of a sitcom episode passed, he took a called strike, then singled to center. He hesitated at first, but thought he could beat out the bobbled throw. Perhaps he was tired of waiting. After all, he had to have some reserve of time, a second or two deposited in some bank. But he misjudged it. Normal time had resumed. His waiting before was different, but only as a matter of degree, not category. He had earned no credit for it. He was just out. His reward for all that waiting was to trudge back to the dugout, and start waiting again.

In their way, the Dodgers are waiting out this time before October; seconds and innings and odd breaks and runs. And we’re waiting with them. We’re just grateful for a bit more action while we do.

You need to be logged in to comment. Login or Subscribe
bwilhoite
I've read this twice.... I love it. Several very quotable snippets.
Reply to bwilhoite
surfdoc37
I thought this would be about a Pedro Baez appearance.
Reply to surfdoc37