Okay, if you aren’t fed up with my sad attempt at a "game" and continued reading, I’m willing to bet you didn’t rank Perez as the youngest of those five arms. If you’re like me, you may have slotted the embattled Rangers southpaw as the oldest in that crop. Perez is a victim of a severe combination of prospect fatigue, early debut age, mediocrity, and injuries. Perez has only been 26 years old for four months, but many of us have his mental age listed somewhere around 30 despite being a much-hyped prospect just four years ago.

This inflated perceived age leads to us viewing Perez much differently than how we probably should. Take, for example, Wednesday’s start. The lefty had perhaps his finest outing of the season, going eight innings and allowing just one run on three hits and no walks (while striking out five). In the midst of a dreadful, 5.18 ERA season, my initial reaction was to write Perez’s gem off as a "broken clock is right twice a day" case, the kind of start that has no rhyme nor reason and shouldn’t be taken as any sign of promise. But maybe that shouldn’t be our reaction. Now, I’m not saying Perez is about to live up to his once-impressive potential, but he deserves to be given a chance.

Perez is only 26 and missed the better part of two seasons following Tommy John surgery. He’s not far removed from being a bright young arm, and last season was his first chance to pitch all year in the big leagues. Sure, the guy is only striking out about six batters per nine innings and hasn’t looked like money on the mound, but positive regression and some solid raw stuff should theoretically result in an imminent turnaround.

It hasn’t been a great couple weeks for the Indians, to put it mildly. The club had a quiet trade deadline, proceeded to lose multiple key players to injuries, and have now dropped three of their last four. They still hold a 3.5-game lead in the American League Central and just swung a trade for Mets slugger Jay Bruce, so all is not lost, but Cleveland would probably like a quick reset on August.

Looking to right the ship at home against the Rockies on Wednesday, the Indians jumped out to a 2-1 lead by the third inning thanks to a two-run homer from Francisco Lindor. His 19th of the season, Lindor has already set a career-high in round-trippers by four, despite having only played two-thirds of a season.

The score remained at 2-1 through eight innings, with starters Antonio Senzatela and Trevor Bauer doing their parts following the early fireworks. Bauer in particular was excellent, cruising through seven frames and allowing just one run on seven hits and no walks, while striking out nine.

Normally reliable closer Cody Allen came on in the ninth inning to try to seal the win, but a Carlos Gonzalez single and Jonathan Lucroy double evened the score, giving Allen a blown save and raising his ERA on the season to 3.38.

Wrapped up at two apiece, both bullpens held steady through the remainder of the ninth, 10th, and 11th innings. It took until the 12th inning for another run to be pushed across the plate, when with two away Charlie Blackmon strode to the box and hammered a 95 mph two-seamer into the right-center bleachers for a go-ahead, and ultimately game-winning, solo home run.

From August 25-27, the first annual Players’ Weekend will be held. While the three days are sure to contain a few surprises, the most intriguing aspect of the festivities has already been revealed—players will have the option to wear a nickname on the back of their jerseys, XFL-style. (FYI: Yasiel Puig won’t go as “He Hate Me,” an incredibly disappointing development.) Whether you think it’s a fun change of direction or a disgrace to the game, it certainly is worth checking out the choices of some of the game’s biggest names. 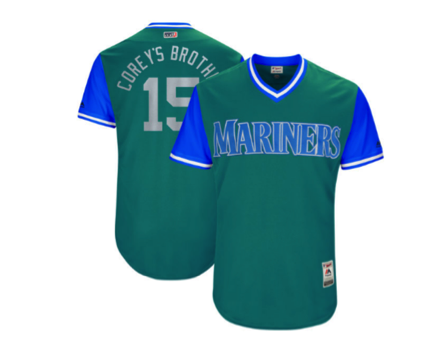 By far my favorite of the lot is Kyle Seager’s jersey: “Corey’s Brother.” In case you forgot, Corey Seager is lighting the world on fire by following up an MVP-worthy rookie campaign with an equally impressive 2017. Kyle has an impressive track record, with four 4+ WARP and two 7+ WARP seasons to his name, but Corey’s currently hogging the Seager spotlight.

While this jersey is, of course, in jest, sibling rivalry is a very real thing, and we can’t blame Kyle for feeling just a bit left out. For now, Kyle’s known as Corey’s brother, but don’t doubt that he’s doing everything in his power to flip that association on its head. Speaking of power, here’s a display of power from Kyle on Wednesday, going deep with a three-run shot in his first at-bat since the jersey was revealed. This dinger alone may not steal the Seager crown, but a small onslaught of long balls should do the trick.

While there was fear that Madison Bumgarner would be spinning his wheels following an ATV crash and lengthy DL stint due to a shoulder injury, he hasn’t fallen off the wagon thus far. The Giants' ace continued his all-terrain attack on opposing batters on Wednesday, going seven strong innings and allowing just one run on five hits, a walk, and seven strikeouts.

In this win against the Cubs, Bumgarner’s cutter was his biggest vehicle for success, inducing four whiffs, nine called strikes, and a lot of weak contact with the ground throughout the start. Okay, I’ll stop making ATV jokes now. Bumgarner’s clearly made a full recovery and has put that injury in the rearview mirror.

Justin Verlander is having a down season following his Cy Young-worthy campaign in 2016, but you’d never be able to tell after watching Wednesday’s start against the Pirates. Carrying a 4.20 ERA into the outing, Verlander exited with a sub-4.00 mark thanks to pure dominance over eight scoreless innings.

Although Verlander didn’t induce as many whiffs as vintage J.T., striking out just six on the day, he moved his fastball around the zone with ease and the opposition had serious trouble squaring up all three of his pitches. Verlander sat at 95 mph and reached as high as 97.5 mph in the eighth inning, and all signs are pointing up for the Tigers’ ace. He has a 1.96 ERA over his last 47 innings (seven starts), and it certainly doesn’t seem like he’ll be slowing down any time soon.

In his last start, Bartolo Colon threw a complete game at 44 years old and approximately 300 pounds. To follow up a performance that is nothing short of a miracle, the Twins’ starter went seven shutout innings last night, striking out five and allowing just five hits and a walk.

I was planning on jumping in here with some analysis of Colon’s pitching, but after watching Wednesday’s outing, it seemed pointless to even attempt to project the remainder of his season. Put simply, what Colon is doing defies all logic and sense. On that note, I proudly and confidently proclaim that the righty is one of the best athletes in baseball, a point I will valiantly argue any naysayer on.

If you give every human on earth Colon’s body type, you’d a) have a real-life version of Wall-E, and b) find that there would be so few people with the ability to play professional baseball that MLB would cease to exist. Hell, even if you put every major-league pitcher in Colon’s body, I’m not sure if you could find one who’d still be able to pitch competitively in the big leagues. People who look like Colon shouldn’t be able to throw a baseball 90 miles per hour with accuracy down to the inch, and repeat that 101 times on an 80-degree day. Bartolo Colon shouldn’t exist, and the fact that he does is an incredible feat of athleticism that shouldn’t go unnoticed.

While this play by Trevor Story won’t go down as the most spectacular in recent memory, take a look at the situation: the 12th inning of a hard-fought, extra-inning game, and two outs.

Watch to Watch on Thursday