I love this Susan Slusser story about mound visits. Here's what I said about it yesterday:

It's the perfect off-day baseball story, bringing whimsy and humor and a touch of seriousness to one of the key differentiating points of the sport, in this case the wee hill right smack in the middle of the action.

Well, not the middle. The mound isn't actually in the middle of anything: not the stadium, nor the field, nor fair territory, nor even the infield. It's not even the center of the action, now that I think about it—on most pitches, it's at the edge of the action, and the point around which the excitement revolves on the average ball in play is somewhere behind the mound. How many groundballs do you see on which the throw passes over the pitching rubber? Not many.

For a piece of the field that so resolutely exists off to one side, though, the mound sure is central to the game as a whole. More than half of every big-league roster spends their most important working hours on top of that hill. (Some of them get downright territorial.) Between pitches, your eyes might explore the rest of the field, the crowd, the batter arriving from the dugout, but those are mere distractions, ways to pass the time until you return to the core of the matter: the man on the mound preparing to chuck. And, as Slusser discusses in the article, it's where the meetings happen. Even when the manager visits with a runner on third in the ninth inning and the whole infield gathers to talk strategy, they don't meet at first base, or by the baseline, or anywhere else. They meet at the mound.

Where else do you find such peripheral centrality? Not in most sports, for sure—tip-offs and coin tosses and such happen at the actual center of the field in soccer, football, basketball, hockey. Maybe, though, in politics. The capital of the United States is not Emporia, Kansas. Nor is Fresno the capital of California. There's likely not even one city hall in all this land that lies at the midpoint of the town. You, dear reader, did not need additional proof of the non-geometric centrality of baseball to America, yet here we have it: Only the national pastime respects the physical arrangement of American power.

When my son was four, we played a lot of MLB The Show. The Show is infamous for its learning curve and difficulty, being the most realistic baseball simulation video game ever produced, and also a simulation of an extremely difficult sport. However, for the less sturdy of constitution and/or four year olds, there are a wealth of difficulty sliders and options to off load much of baseball’s snap decisions and rules cognition off onto the AI. You can reduce the game to a simple test of how well you can time mashing the X button, or Square if you want to swing for the fence.

As a baseball button masher Domingo Santana has enjoyed a fine year. The 25-year old has 18 home runs, a .473 slugging percentage, and a .293 TAv. His offense has been a fine contributor to the Brewers’ exceeding all rational expectations in thus far in 2017. But Domingo Santana plays in the National League, and the National League will not allow you to play with auto-fielding. Invariably, a ball will be hit, and you will need to tilt the control stick in the direction you instinct deems best. On Monday, clinging to a one-run lead against the Twins, Domingo Santana faced just such a test: 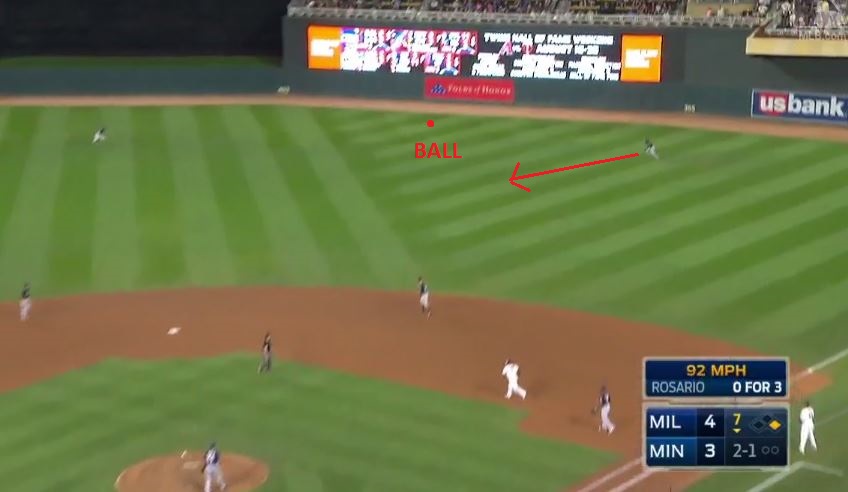 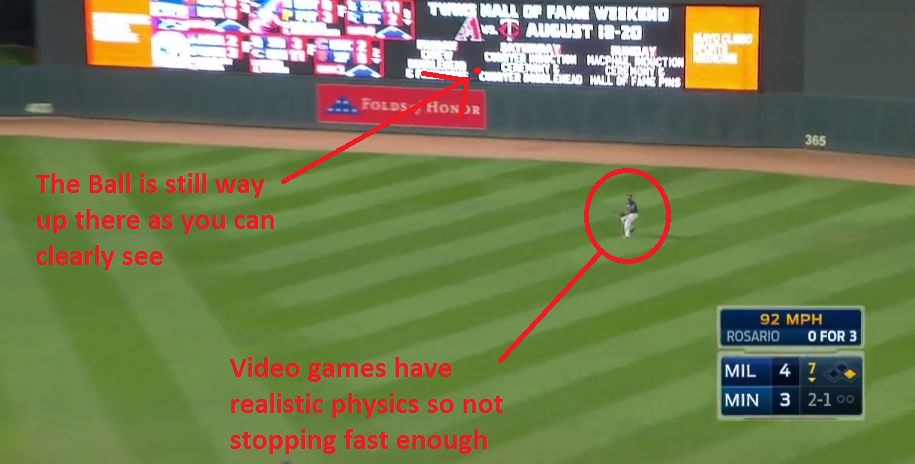 And of course, the button masher returns to his roots, desperately pressing the Triangle Button 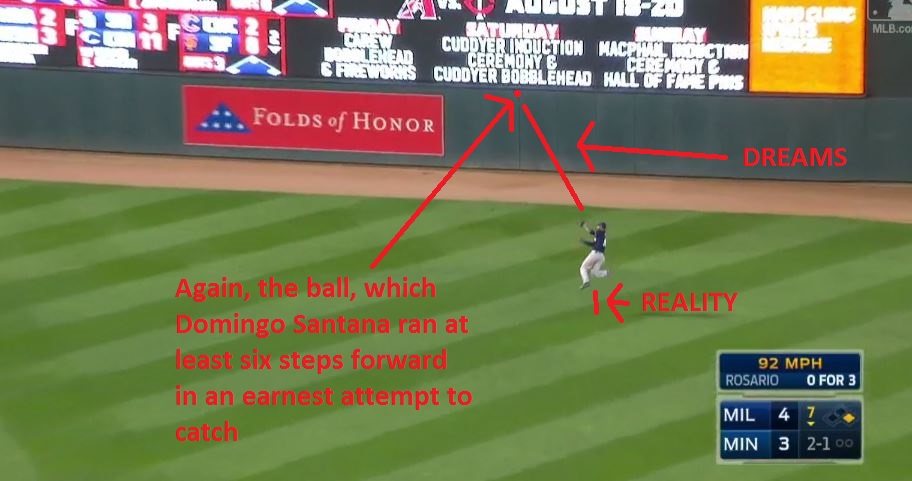 Sadly, we are still three years away from Super Baseball 2020, whose rocket packs would have helped Santana’s Dream/Reality ratio even out.

My son got very good at hitting home runs off of me in The Show, mashing his X and Square buttons, but we never even tried turning off auto-fielding.It was a lot more fun for him that way. This is surely not the best argument for the designated hitter, but it is definitely another one.