For as long as there’s been organized baseball, there’s been an economic component to the sport. Ballplayers appeared in ads for everything from tobacco to tooth whiteners; outfield fences exhorted fans, in five-foot-high letters, to DRINK IRISH WHISKEY or CHEW ADAMS GUM. Today, in addition to in-stadium advertisements, fans listening to radio broadcasts are treated to “drop-ins,” brief plugs for companies that are sort of relevant to the play at hand. A sandwich chain that delivers “freaky fast” sponsors stolen bases; a paint company, a perfectly placed strike on the edges; an insurance company, a late-inning run. In today’s breathlessly competitive economic environment, where exorbitant TV deals necessitate the tin-cup beggaring of the radio broadcast, I personally find the drop-ins charming: crass commercialism, sure, but wearing the thinnest veneer of attempting to be relevant to the game at hand. The economic arc of the universe bends towards sponsorship, and I care not to see my beloved baseball men slathered in patches like NASCAR drivers, and to that end I say, More drop-ins! More cheesy drop-ins! But the problem is, all the fun stuff–pitcher velocity, stolen bases, home runs–are all taken. Yet even less heralded plays have sponsorship opportunities that may be going overlooked.

A catcher nabbing a would-be base stealer has surely captured sponsorships from home security companies, and maybe an especially sabermetrically-aware craft store might see the golden opportunity to promote their custom framing department, but what of that least sexy part of the defensive catching triumvirate, blocking? A brief perusal of the definitions of “block” tells me that a block is a “head-shaped mold used for shaping hats or wigs.” Who knew that was called a block? Or that it was even a thing to be named? Clearly, Big Block is suffering from a PR failure.

Fans boo when an opposing pitcher throws over to first too many times, which is understandable: it gets boring, after a while, and interrupts the rhythm of the at-bat. But since the interruption is right there already, what’s the harm in a little splashing sound effect as the runner dives back, sponsored by a local fishery/swimsuit manufacturer/longshoremen’s union? Oh, there’s actually a great deal of harm in that? Fair enough.

For the pitcher with the bases loaded and none out, this is a convenient time to mention Dryzopine, the drug to treat hyperhidrosis. Group discount available for members of the Baltimore Orioles rotation.

Grounding into the shift is a perfect symbol for hopelessness in baseball. The ball is hit, the defender is right there; it has a feeling of inevitability, even as the batter churns his legs towards first base, hoping for a throwing error, hoping to beat it out, knowing he won’t. The batter is fighting against himself, his own tendencies; he is facing long odds made longer by the simple positioning of players in the field. Grounding into the shift: sponsored by Match.com. 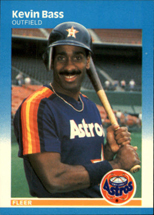 It’s probably not entirely flattering to admit this, in retrospect, but in college I loved the Kevin Bacon game. You have to understand that in the pre-smartphone era, there were all these situations when you had to wait for things with other people–at restaurants, in traffic jams, in movie theaters–and you couldn’t just break open a mass market paperback from your coat pocket and ignore them. Thus Kevin Bacon: the game where someone names an actor, and you have to name a movie they’ve been in with another actor, who worked with another actor, until you get back to Kevin Bacon. You win by having successfully killed the necessary amount of time.

(Based on my two-second cameo as a jacket-clad Masters Tournament champion in the 2003 South Korean romantic comedy Yeokeone Sanda, I possess a Kevin Bacon number of 4.)

If it sounds like a lot of pointless memorization of supporting actor names and numbers, you’re right! Also, you’re a baseball fan and a BP reader, so enjoy your glass house. But rather than worry about caring Kevin Bacon’s resume, of which I couldn’t name a film from the past fifteen years, I’d like to apply the same game to baseball. The process is similar: I will supply two names, and your goal will be to find a path of shared teammates that connect them, using as few links as possible. Note that players only have to share a team and a year, not actually be on the field together, and that there is almost assuredly more than one right answer. Enjoy!

Variations on a Theme

All baseball careers offer a narrative. Each comes with its own chronology and set of statistics, and that is enough enough—not enough to guarantee that this narrative will be clear or complete or anything more than the skeleton of a much fuller being, but enough to guarantee that it will be there and it will be something. Those narratives do not have to carry anything. There does not have to be a definite moral or a theme or any sort of deeper meaning; from a distance, usually, there isn’t. But people tend to go looking for these things anyway, and they tend to provide them when they aren’t there. We tell ourselves stories in order to live, and we color in baseball lives in order to prove that they matter.

Here is the theme that baseball, collectively, has given to Tim Beckham’s career: that he has never been enough. You can see this, if you’re looking for it, even at the moment where he was most enough. He was the No. 1 overall pick, sure, but not by any consensus. “There was no obvious slam-dunk first overall pick in the 2008 draft, and the Rays finally settled on Beckham and his tools as the best package available,” we wrote in the 2009 Annual. There are lots of things a team can do with the first overall pick, but settling for what’s available isn’t usually how they want it described. And so from there Beckham started a career as a prospect who was never as good as anyone had hoped him to be; a major-league player who was only ever hovering around replacement level; perhaps most damningly, a person who could and would never be Buster Posey.

By this year, Beckham had grown into a largely decent utility infielder who actually exceeded some of the expectations he’d set for himself in the minors. It didn’t matter, because how does anything when this is the underlying theme of your career?

Last week, Beckham was traded to Baltimore, where one narrative was absorbed by another. This week, he has—finally, at last, in some way—been enough. He recorded six hits in six games, three of them home runs. Player of the Week in less than a week! Not just enough, but for once, more than it.

You need to be logged in to comment. Login or Subscribe
sunsshagger
And, if you're stuck with the Kevin Bass Game, the Oracle of Baseball (https://www.baseball-reference.com/oracle/index.shtml) is a big help and is also fascinating!