Prophet of the Bon Mots

I’ve been driving through North Carolina on a prospect trip. Ostensibly for my job in the “quotes business,” I could probably do pregame interviews and just leave without watching games and not get fired. For the larger, official mission, that of learning the ways of the scout, the pregame is nigh irrelevant.

Save for batting practice, of course. The experienced scout can spot a diamond in the rough in a single session, dismissing others with a glance. Stealing a moment to spy upon the batting practice of the High-A Potomac Nationals, I see a potential discovery. Taking, smooth controlled hacks and driving the ball to all fields is a slim athletic figure. He’s tall and lean, hinting at even more physical projection down the road, but shows no contortion to hit the ball for power. I transpose that swing onto the background of the majors, and wonder.

So, after I realize that I’ve been ogling Michael Taylor during his injury rehab assignment, it’s on to the game. The stadium gun has the Winston-Salem starter sitting 88-89 mph, but any real scout knows the stadium gun at a minor league park is not to be trusted, so I look around for a pro who would know. Once I spy two gentleman wearing Under Armor polos who look like they are not enjoying themselves, I know I have found my people.

“What’s this guy sitting at?”

With this triumph in my back pocket, it’s time to head on down to the mecca of the prospect world: Triple-A baseball. In a game between the two most vaunted farm systems in the game–the Braves and the White Sox–you just know it’s going to be all studs.

I wasn’t disappointed, as the Gwinnett Braves tossed out a dominant left-hander, who overwhelmed the Charlotte Knights for eight scoreless innings with 10 strikeouts and just a single walk to lower his season ERA to 2.72. I was slightly disappointed to learn the pitcher was 31-year-old Andrew Albers, but as the scouts always say,* “we’re all prospects until we’re dead.”

Scouts are just as important for eliminating candidates as they are for identifying players might be good before they turn 31, so unfortunately it was time to get out the red pen on some poor soul. Even though it was against Lucas Giolito, that No. 3 hitter for the Braves who couldn’t barrel three-straight challenge fastballs after getting ahead 3-1 disqualified himself. I can say with full scouts confidence that I don’t think we’ll be hearing from that guy soon [Ed. note: Turns out this was Dansby Swanson].

On August 28, 2015, the Mariners fired General Manager Jack Zduriencik. Three weeks earlier, while the hot seat glowed, I followed a man I believed to be Dave Dombrowski through downtown Seattle in service to journalism. Dombrowski was briefly tied to the Mariners’ GM job; spotting him in Seattle would have been newsworthy. As with every game, my pursuit had peaks and troughs. 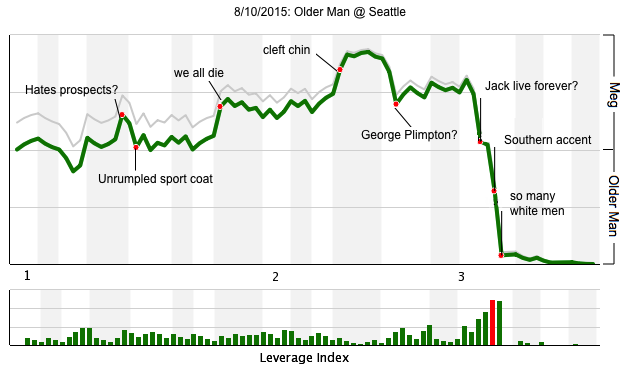 [A well-groomed middle aged man exits the Fairmont Olympic Hotel, half a block ahead]

-Wait, is that Dave Dombrowski?

[I scout “Dave Dombrowski” across traffic]

-Leans away from young person on the street, evidencing seeming aversion to prospects.

-Jack Zduriencik is our punishment for a past life; he will never leave us.

-Eventually, we all die.

[“Dave Dombrowski” turns to read a street sign, revealing his profile and a brief glimpse of his chin]

There they are. Is that two Dombrowskis, or is one of them George Plimpton, or is it possible both of them an entirely different, third man I have now followed two city blocks? What are the differences between journalism and stalking? Am I satisfying those conditions?

-There’s no way I break this before Rosenthal.

-Is… is that a southern accent?

-And really, there are so many white men in Seattle.

In the stage directions for the opening scene of Tennessee Williams’s one-act play, “The Long Goodbye,” there’s baseball in the background, the sound of a broadcast trickling through protagonist Joe’s tenement apartment from the unit next door. Joe is a young writer, struggling before his manuscript, and the sounds of the game vex him to the point of slamming closed the windows. When general silence finally descends on the scene and Joe’s friend Silva walks in to get the play started, Joe exclaims, “Radios, baseball games! That’s why I write nothing but crap!”

Of course, it’s neither the fault of radios nor baseball games that Joe’s struggles, and the play moves on to memory and personal history.

I’m thinking of Tennessee Williams and this play that mentions baseball only in passing because I’ve just spent two recent weeks in the late playwright’s debt, living in a dorm room on a southern mountaintop and spending sixteen hours a day listening to writers and talking about writing at the Sewanee Writers’ Conference, which is supported by the Walter E. Dakin Memorial Fund through the estate of Tennessee Williams. The experience was, in short, a personal idyll populated by the giants of the literary world and a wealth of utterly delightful new friends. But the experience was all-consuming, not only pulling me out of my usual geographic haunts but also my habits and routines.

For two weeks, I didn’t see so much as a single inning of baseball. Time stopped, and my common measures of it—day baseball or no? whose spot was up in the rotation?—fell away. I barely checked Twitter, turned off notifications for nearly everything.

Two weeks out of a season six months long seems like it must be inconsequential, but we’re into August now and the games have become even more precious as the number remaining dwindles. The days I was gone, too, were the end of the trade deadline. The Phillies I left were not the same Phillies to which I returned.

On the long drive back home on July 31, the material fact of that solidified. I found myself lucky enough to be on the road at the same time as the Phillies’ getaway game against Atlanta, and at a rest stop in Virginia, I had to check to see who the new left fielder was. Hello, Hyun Soo Kim, part of the Phillies’ return from the Orioles for Jeremy Hellickson. Goodbye, Pat Neshek, a short-term Phillie but who’d become familiar nonetheless. So goes the late summer rhythm.

I drove on, nearly four more hours between me and home, trying to imagine the next day, the departure from utopia weighing. Still, I had new ideas about which to be excited and familiar voices in my ears. In the third inning, Odubel Herrera swatted a three-run homer.

The Phillies went on to complete a four-game sweep. Circumstances were no longer as they had been, but there were reasons enough to be glad.

You need to be logged in to comment. Login or Subscribe
tearecrules
I want to keep y'all on my ad-blocker whitelist, but my God you make it very difficult. Tried with multiple browsers and each one this stupid Brawny commercial would refresh the page when the ad was done.
Reply to tearecrules