I first saw Gillespie soon after the 2014 draft, for a few games in the NYPL. A switch-hitter, my thought then was that his left-handed swing was too long and the first-base offensively threshold was too high for him to live up to his first-round selection. But he’s done well making his game work and performed well up until this season in Triple-A Durham. He’s shortened his stroke, allowing him to find his power when he’s in fastball counts, which is often, since his patience at the plate is what got him here (career 12 percent walk rate). Despite his adjustments, he still struggles with good velocity, but is at his best going opposite field and hoping to find a gap, pulling softer and inner stuff.

I’m not a fan of Gillaspie’s right-handed swing, and while he’s hung in at Triple-A, he doesn’t get the bat through the zone quick enough for consistent contact for me to see it playing well at the big-league level. That Gillaspie has demonstrated an ability to make adjustments bodes will for him, and he’ll prove 2014 me wrong by contributing in the majors. He brings no speed and only average defense at first base, so I see a strong-side platoon role as long as he maintains his best skill: plate discipline. —John Eshleman

When the prodigal swingman left Seattle on the eve of the 2015 season, he was seen as a regrettable roster casualty, the perfect shuttle candidate tragically out of options. Ramirez returns not a different pitcher, per se, but the best version of that former self: a versatile, four-pitch wormburner-type who can work the sixth inning and also maybe the first five.

This was a trade not of talent but of fit: the M’s gave up some late-innings punch to buy flexibility, as the team struggles to weed the Tacoma Rainiers out of its major-league rotation. Never much of a prospect, Ramirez built his reputation on minor-league results, particularly an enticing level of control. That control left him in his early years in the majors, where his lack of stuff forced him to nibble too far around the edges, and his lack of an out pitch limited his usefulness when he did get ahead. The result: one of those rare challenge change-of-scenery trades, for Mike Montgomery, that worked out for both teams.

Ramirez broke out (in the way that a Rays player breaks out) in 2015 by overcoming his lack of an out pitch by acting like he has one anyway. The result is sort of Keuchel-Lite: he throws his fastball everywhere in the zone, seemingly at random, while his offspeed offerings are almost always below the knees. He’s also devised a new pitch, phasing out his curve in place of a cutter that appears, thus far, to be doing the job. It’s the RBI Baseball style of pitching, and when it works, it’s when he can get those non-strikes to entice. This year he has, with a CSAA well above average.

Superficially it’s been a down year for Erasmo, with a 4.80 ERA and some ugly meltdowns in early June, including a 10-run start against the Tigers. He’s also struggled to get his sinker out of the zone, the root of many of his problems. But if you strip out his ugly 63.8 percent strand rate and focus on his peripherals, he’s pitched better than in 2016, if not up to the standards of his 2015 career-year. The result is a very useful pitcher, the kind you’re sick of seeing on the marquee when your team is bad, and fail to notice when they’re good. Fortunately, the Mariners are neither, so perhaps Ramirez will be appreciated for the spackle that he is: there to fix a hole, not make it look good. 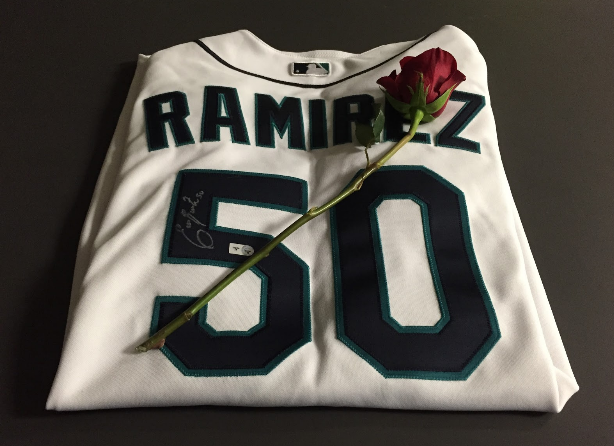 If you have siblings, you probably remember that holiday gift giving could be a bit awkward growing up. My little brother would always rush to tear open his presents first. Then there would always be some comparison. Did my brother get cooler toys than I did? No way! He got frustrated and stuck all the bows from the gift wrapping on our cat, who absolutely loved being part of the decorations.

The Rays saw the Yankees get two elite bullpen arms last week in a huge trade with the White Sox. Then they watched the Royals add a starter and two solid relievers on Wednesday. The Red Sox called up top prospect Rafael Devers and traded for Eduardo Nunez in case Devers can’t make an immediate impact. All three of the bigger brothers that the Rays are chasing got fun new toys. Initially, all the Rays got was Dodgers castoff Sergio Romo. Now they've started making bigger moves by trading for Lucas Duda yesterday, but because throwing isn’t exactly Duda’s forte the Rays have added two more relievers.

Cishek, a former closer for the Marlins and Mariners, is the bigger name of the Rays’ most recent bullpen additions. The sidearming right-hander had offseason microfracture hip surgery. He came back to the big leagues on May 15, but Seattle largely restricted him to pitching in low-leverage situations every fifth day in his first month. Cishek seemed to be rehabbing in the majors and clearly needed time to round in to form. Seattle moved Cishek back to a higher-leverage role on June 18. Since then he has a 2.31 ERA and has held opponents to a .606 OPS, but it’s only an 11 2/3 inning sample. The sidearmer has strong platoon splits and could do well in a matchup role, but it’s unclear if he’s durable enough to come in for 1-2 key batters every game.

Jennings is one of the most consistently mediocre relievers in baseball. The lefty has been worth 0.0, 0.8, 0.0 and 0.3 WARP over the last four years. He’s not bad enough to make fans cry and get fired. The way that Tampa Bay has churned through relievers this year, getting a perfectly cromulent reliever may be an upgrade. Jennings may be cast as “the go-to lefty in the pen” because he’s left-handed, but that’s not his natural role. Both righties and lefties have a .332 on base percentage against Jennings in his career. He’s an extreme ground-ball pitcher (58.4 percent this season), so a creative team might try to use him as a “come into a jam to get double plays” specialist. On the other hand, Jennings has walked more than 10 percent of opposing batters in 2016 and 2017, so using him in high-leverage situations is a bit terrifying.

This is still more than the Rays pouting like a little brother, saying, “Other Wild Card contenders got a pair of bullpen arms so we want a pair too!” Cishek and Jennings will improve the Rays' bullpen even if they are just replacement-level arms. There’s always a chance that relievers with some talent put it all together for a few months. Two years ago the Cubs signed Trevor Cahill in August as a minor-league reclamation project. He became their primary setup guy in the playoffs. Cishek could catch fire as he fully recovers from his offseason surgery. It’s not the most likely scenario by any stretch, but the Rays have a legitimate shot at the Wild Card. If the price is right, why not grab some relievers and hope they can contribute just as much as other teams’ shinier new acquisitions? —Noah Grand