Tennis has a concept, you'll learn at most a couple of minutes into any TV broadcast, of "unforced errors." The is to distinguish biffing a ball three feet long for no good reason from running your damndest for a wickedly struck, heavy-topspin forehand in the deep corner and barely getting a racket on it. The difficulty with this distinction is that the modifier implies the latter is some other type of error, but is it really an error if your contribution to the event was so little that no reasonable person would blame you? That no reasonable person would feel regret?

Maybe it would reflect an error for a good NBA basketball player, but is it an error if literal LeBron James dunks on literal you? A professional shouldn't miss an extra point wide left, but if the coach sends a 55-yard kicker out for a 62-yard field goal, is it an error when the try dies harmlessly in the end zone? We should use a different word for skipping your daughter's wedding in a fit of pique than we do for missing it because you've been hospitalized 500 miles away.

Baseball figured this out in its official defensive statistics by recognizing the plain, unvarnished error. Sure, there are dozens and dozens of problems with errors (binaries are silly; the same play might or might not become an error, depending on what the baserunners do; every scorekeeper scores things differently; game circumstances and home/road status seem clearly to factor into error/no error decisions; [20 others]), but I'll take them over an implication that "forced errors" could possibly exist.

We could use, in other words, an honest error/no error scale, designated by an in-park expert, for baserunning. Why? So that we can properly credit the Reds with a "double play plus error" rather than a triple play for this: 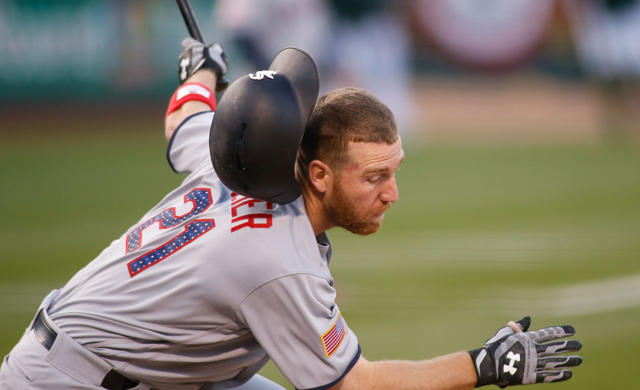 “Well, first of all the prep time is unacceptable. We’re playing baseball here, not slow pitch softball. Secondly, I…..I just can’t with these ingredients. You are only as good as your product, and what I see here is a man working a set up and stride that I wouldn’t let my 7-year old watch.

Of course then we have the presentation itself. What is he going for? Mark Reynolds has already trademarked the playing-baseball-blind thing. Why even have a right-hand on that thing? This looks like my drunk uncle trying to recapture the high school glory days on a brown field somewhere in Huntsville.

“I was a decent ballplayer back in my day, y’know. Fred Manford’s uncle had played some minor league ball and when I was twelve he saw hit a homer and told me ‘stick at it kid and you’ll be a star’. So I kept playing and for awhile I was pretty good but in Junior High I developed a stigmatism; ‘eyes like footballs’ Dr. Ponder said. So I tried out these prescription glasses, special things, lenses as thick as my pinky, but still felt like I couldn’t see the ball. I had a rough year in 8th grade, and when Suzy Cawlett, who was really the first gal I ever really had my eyes, well when she saw me strike out three times in a game against Oaktown I just kind of lost my confidence. I made it through high school alright and did some community college courses, but I never much cared for traveling and it’s cheap living here. So I started up at the Post Office about fifteen years ago, and I think I’m doing fine.

Anyway, what was the question?”

“The first thing I see here is a man whose motivational core is not synergized. A baseball swing is like anything else, it requires an utter belief in yourself. It is, as you would say, a reflection of the id. This swing invites negativity and doubt, it is LADEN with baggage. The way the left-hand comes off the bat almost immediately? That says to me that Todd is holding onto something, some memory, some experience that he’s allowing to enter his mind and hold him back from truly being the player he can be.

What I would recommend for Todd is a what we call our Freelax Program, a 7-day mental health and spiritual journey at our resort on Catalina. An incredible setting with water views and a space to allow for our Success Concierges to guide you through a journey to self-discovery, in which we slowly slough away all the failure clinging to you like a parasite, allowing you to re-enter the world in your fully-balanced, and naturally successful state.

Give me 7-days, and I’ll have that swing looking like Crouching Tiger, Hidden Dragon made a baseball spinoff. Yes, we take AmEx.”

Mike Trout and the Manifestation of Potentiality

Yesterday evening I was scrolling through my twitter feed when I came across this very important piece of information:

Upon first glance you may try and brush this off as a bit of lazy and harmless marketing. Perhaps just one of a thousand photographs with the contrast blown out waiting for a quick tagline and a push of the send button to meet your awaiting eye. But after a few glances I got to thinking…I mean…what if it’s true? Heck, Aristotle may have told us that potentiality can be understood as that which is opposed to actuality…but at what point does potentiality come into being as an actuality? Must it, always? Or is the indeterminacy of potentiality precisely what tells us something meaningful about a player such as Mike Trout over another such as, say, Brendan Ryan? Does the entry-level marketing intern at 245 Park Avenue know something we don’t? Let’s find out by looking at last Sunday’s game between the Angels and Red Sox: 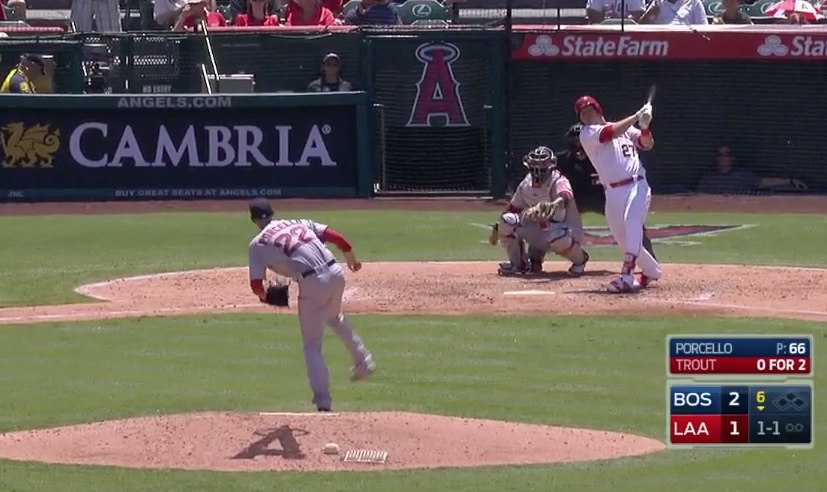 –SAILS HIGH INTO THE AIR AND IT’S GOING IT’S GOING, GOING OVER THE CENTER FIELD WALL! IT MIGHT CLEAR IT IT…IT DOES! IT DOES OH MY GODDDDDDDDDDD, THE GAME IS TIED AT TWO, AND WAIT…WHAT IS THAT, NOT ONLY HAVE THE ANGELS PULLED THEMSELVES OUT OF THE SICKLY JAWS OF FAILURE BUT… 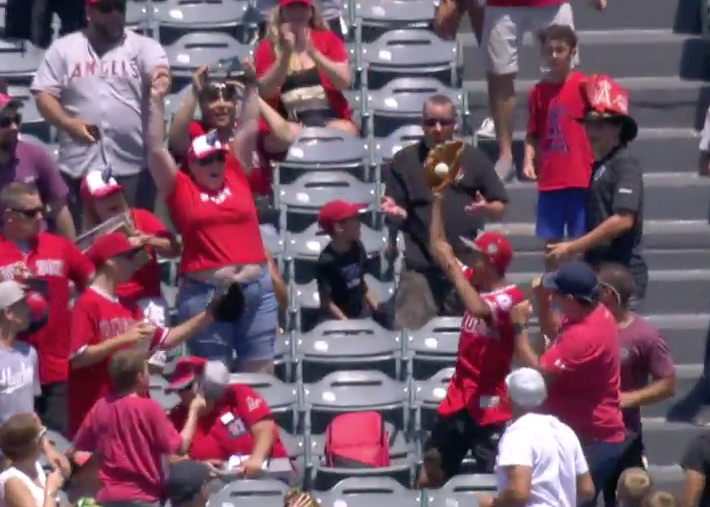 …A YOUNG ANGELS FAN SUDDENLY CATCHES THE BALL IN HIS GLOVE STRAIGHT FROM THE SKY, HE DIDN’T EVEN HAVE TO TRY, IT JUST WENT *PLOP* RIGHT THERE INTO HIS GLOVE! HE IS ECSTATIC, TEARS BLEED FROM THE CORNERS OF HIS EYES AND THERE IS A HIGH-FIVE AND THE WOMAN SITTING ABOVE HIM HASN’T FELT SUCH JOY IN WHAT SEEMS LIKE YEARS, PERHAPS MONDAY, FINALLY MONDAY, SHE WILL STROLL INTO MR. LEWIS’ OFFICE AND TELL HIM SHE DOESN’T NEED THIS STUPID JOB ANYMORE, THIS DISRESPECT, SHE FEELS FREE AND THE AIR IS CRISP BUT THE BOY STILL DANCES, HE IS DANCING AND IT IS EPIC, EPIC, I SAY, EPIC!!!! 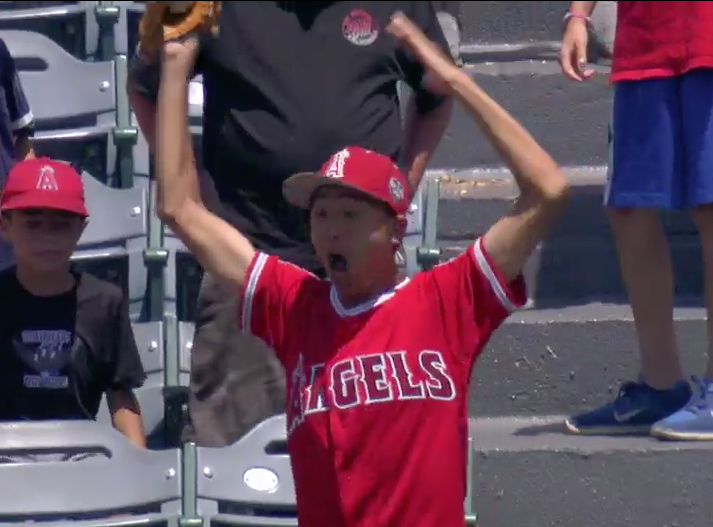 4. 23 July, Inning 8, vs RHP Rick Porcello: Mike Trout makes weak contact with a low slider in the zone, lines out into the glove of Decen Marrero.

Verdict: Look, the guy is good, but relax.