Do you think Manny Machado and the Orioles are happy there isn’t a #narrative to go with the worst hitting season of his career? On one hand, no one is propagating wild theories that Joe Maddon broke him with some intentional walks. No one is whispering about mysterious maladies or off-field distractions. No, all they have is a .230/.296/.445 first-half line and assurances that Machado is hitting the ball hard. Really, really hard.

While that makes him a slam dunk buy-low option for your fantasy team, the uplifting outlook probably isn’t raising many spirits in the Orioles' front office—or in Machado’s camp either, for that matter. The team that could contend without starting pitching suddenly can’t, and now their golden parachute—a year-and-a-half of a bona fide superstar—is probably sequestered for the time being by the law against selling low. For Machado, his perplexing down season (a la Bryce Harper’s 2016) could be one calendar fresher in the minds of potential suitors.

Baseball has a way of compressing basic human thought processes into terrors: The little ball is flying and spinning and moving, in the air for less than 61 feet, and a highly skilled professional hitter must act. Changing any part of the muscle memory involved in those crucial, short moments could derail everything for him. And sometimes, it feels as if not changing anything could lead to the same disastrous result.

Machado’s home run pace isn’t down from the past two seasons—clearing an easy path to confirmation for one’s previously held belief that he simply possesses 35-homer power now. With that multiplication done, it’s just a hop, skip, and a jump to thinking that his slugging percentage might be right back at 2015 levels, at least, if only his batting average on balls in play came back in to line. And if you can narrow a problem to BABIP, is it even a problem at all?

That, in short, is the logical spark for saying Machado should just keep doing the same things and expect better results.

It’s an enticing tale, an explanation that adds up. But where batted-ball quality was once baseball’s version of theoretical physics, with the shape of an unobservable reality extrapolated from its outward effects and explained away by a couple textbook rules, it’s now a slide under the microscope—a wild tangle of dots, lines, and arcs that can be combed through and explored.

So, we don’t have to blindly consider the gravitational forces pulling down on Machado’s numbers. Scary as it might be, we can go out and search for those all-important orbs—the missing hits. And we shall.

In seeking a place to begin, we’ll remember the relative stability of Machado’s fly-ball success. It seems we might be looking for something closer to the ground.

This, then, seems as good a starting point as any: Machado is running a career-low line-drive rate, having put only 57 of his 261 batted balls in that high-average category. That, in and of itself, isn’t necessarily an issue. Jose Altuve is running a similar rate, and Kris Bryant runs a lower one.

Having the 211th-highest line-drive rate among 246 players with at least 200 plate appearances could get dicey when you’re also popping up 11.9 percent of your batted balls. The combined rates bring Machado into company with Rougned Odor, Javier Baez, and Byron Buxton. However, the pop ups aren’t exactly new. He popped up 11 percent of his batted balls last season. His fly balls, and the most obvious miscues incurred in their pursuit, don’t appear to be the culprit. The line drives appear to be the most promising target of our probe.

Using Statcast—via Baseball Savant—I narrowed the territory to batted balls launched between -10 degrees and 15 degrees. This covers everything from “bouncer” to “liner that could hit the base of the wall if struck well enough.” Nothing in this range would be classified as a fly ball.

In 2016, Machado went 90-for-163 on such balls, a .552 AVG. In 2017’s first half, he hit them just about as often, but went 37-for-86, a .430 AVG. If the gap between those doesn’t seem striking—understandable given the unfamiliar nature of this split—know that if he were accumulating hits at the same rate as 2016, he’d be batting .261 overall and there’s virtually no chance you’d be reading this article.

(The league hit .491 on these last season, and is hitting .497 this year. Even if we only bring Machado to this season’s league mark, his overall average would get bumped up to .248.)

Since Machado is leading qualified hitters in exit velocity in this range, at about 101 mph (he hits the ball hard!), this sounds an awful lot like the BABIP conclusion. It’s not, though. Direction and trajectory matter, and enough has changed in those two arenas to raise the question of whether Machado can expect otherwise unprompted regression to his previous level.

Let’s start with direction. If defenses knew nothing about Machado except “power-hitting righty,” they’d probably be playing him just about perfectly. He’s adhered much closer to that standard formula in 2017—pulling things on or close to the ground, going opposite field with air balls. 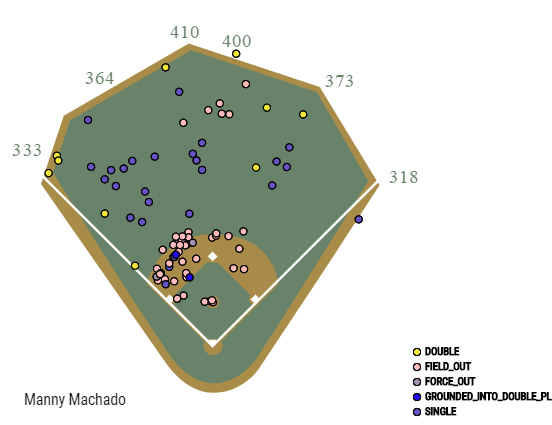 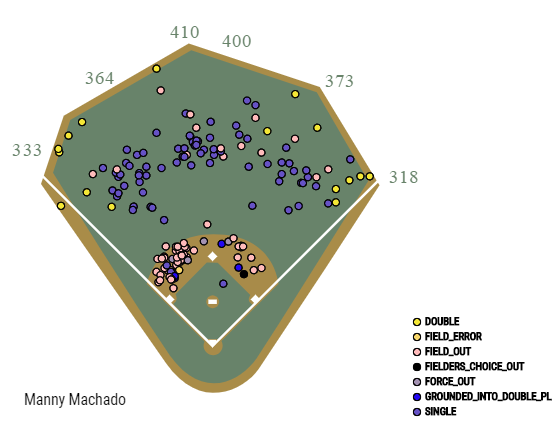 The list of hitters accumulating hits in this range at similar or worse clips is, well, it says something: Matt Carpenter, Brian Dozier, Anthony Rizzo, Matt Holliday, Brandon Belt. They’re all in the bottom 30 of the 200 hitters with at least 50 such first-half balls in play. Whether Machado has legitimately gained a reputation for his 2017 spray chart is sort of beside the point, which is that teams are playing more and more hitters of his ilk in such a way that will rob him of hits.

Pretty well-hit balls that might typically be said to be headed for the hole between first base and second base turn into Jose Abreu fielding a ball here. 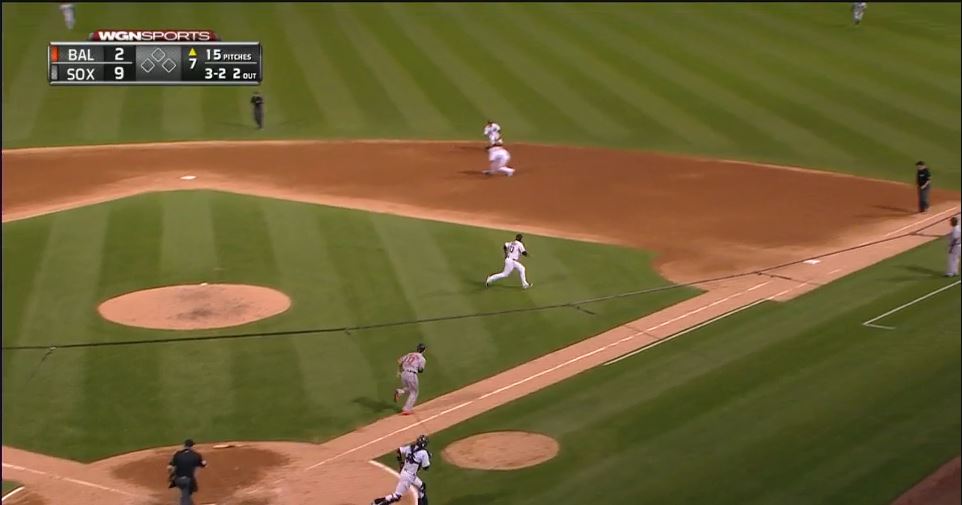 On the other side, a ball “into the hole” between third base and shortstop becomes this gathering point for Wilmer Difo. 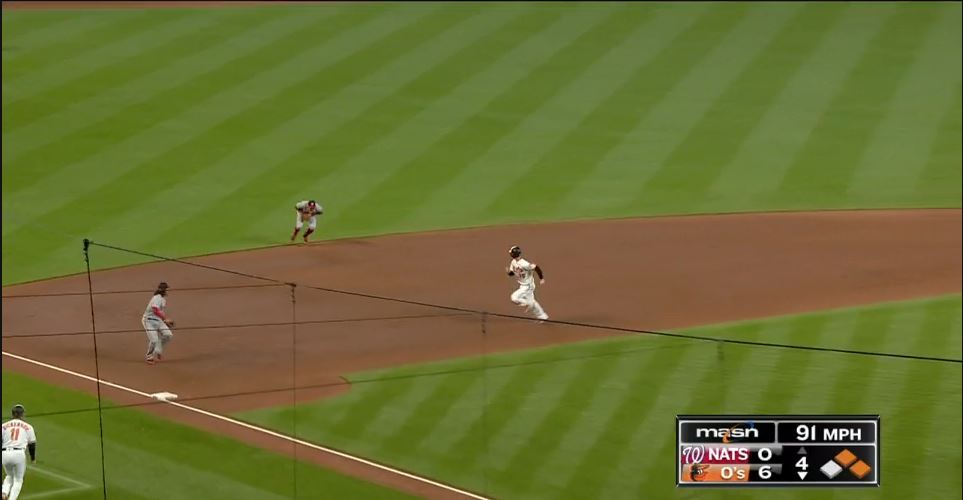 As for trajectory, we’re going to go with the time-honored method of comparing two charts. Below, you’ll see radial charts of Machado’s batted balls, via Baseball Savant, within our same search area. I added a circled area, encased by a dotted line, where last season he racked up about a dozen hits, all but two of them singles. 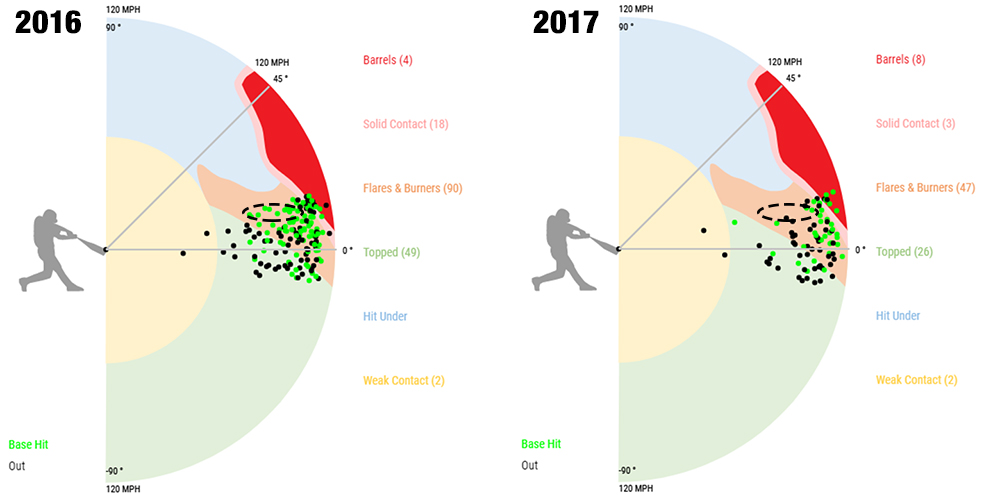 You’ll note that 2017’s circled area is all but empty, and if you want to ask me to stake my best guess as to where Machado might find his missing hits, this would be the place. Keeping in mind that 2016’s chart reflects a full season, that’s a good six or seven hits he’s gone without, which gets you much closer to the expectations of both the projections and our eyes.

These are softer, but still solid liners lofted into the space between infield and outfield. Simple, boring, effective and, probably, necessary. In 2016, they looked like this.

Or, if he hit one down the line, like this, it could be a stray double like this.

Understanding (and issuing this disclaimer for) both the anecdotal nature of the evidence, the lack of your guide’s expertise here, and the natural give and take of a hitter over time, I’ll note that it’s quite difficult to find a similar looking swing from Machado in 2017.

The angle of the bat is not wildly different, and he still often does a good job adjusting his plane and his hands. What you can’t seem to find are the swings where his weight ends up more evenly distributed between his back foot and front foot. Overall, that doesn’t seem like such a bad thing, but in this range of batted balls, it ends up driving a wedge right through that area where singles fall—pushing the contact further into the air or slightly lower toward a waiting infielder.

It is here I must leave you to your own thoughts of what we’ve found. The chorus shouting the virtues of Machado’s season thus far—calling out the good things coming his way—may very well be right.

We are far too new to this era of batted-ball drilldowns to know whether some intentional mechanical tweak could be this finely targeted, or whether Machado is trying to trade in these hits for more power, perhaps. It also seems as though we are too aware of this new information to completely pass it by, and you wonder which way Machado and the Orioles will turn if his search for success doesn’t improve soon.

You need to be logged in to comment. Login or Subscribe
bulls2327
maybe he's just being "baseballed", as I liked to call it?
Reply to bulls2327
jfranco77
Really interesting article. How many of those 12 hits in the magic circle were oppo? In general his 2016 spray chart has a bunch more balls to the right side. Trying to pull everything could result in grounders to short instead of flares to right-center.
Reply to jfranco77
zcrizer
Looks like almost half were fielded by the right fielder, so definitely oppo. Then a couple more were picked up by the center fielder (possibly oppo-ish). And yep, your thought certainly squares with my guess that swinging from his heels more often has led to more of those grounders and longer flies as opposed to the drop-in flares/liners.
Reply to zcrizer