The strike zone is defined by rule, but is also a site of our (and the umpire’s) perception. It serves as a Rorschach test, revealing to us craft, or guile, or injustice, depending on the call. It is a series of points that taken together amount to a walk or a strikeout, and on occasion, to something else entirely. What you see probably says something about you, though I’ll leave it to you to decide exactly what. 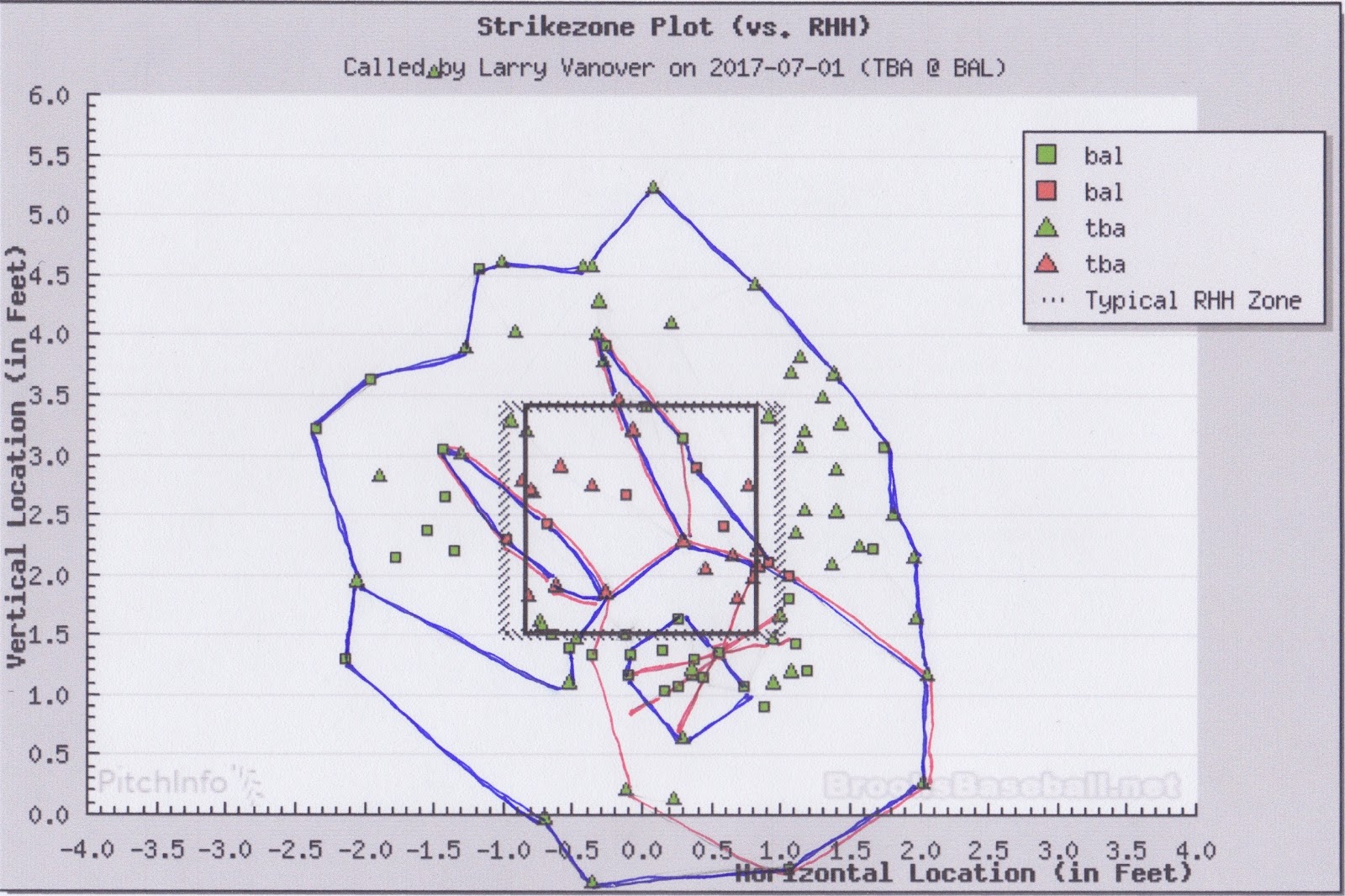 A bunny, the Brewers logo, perhaps an oddly proportioned teapot. 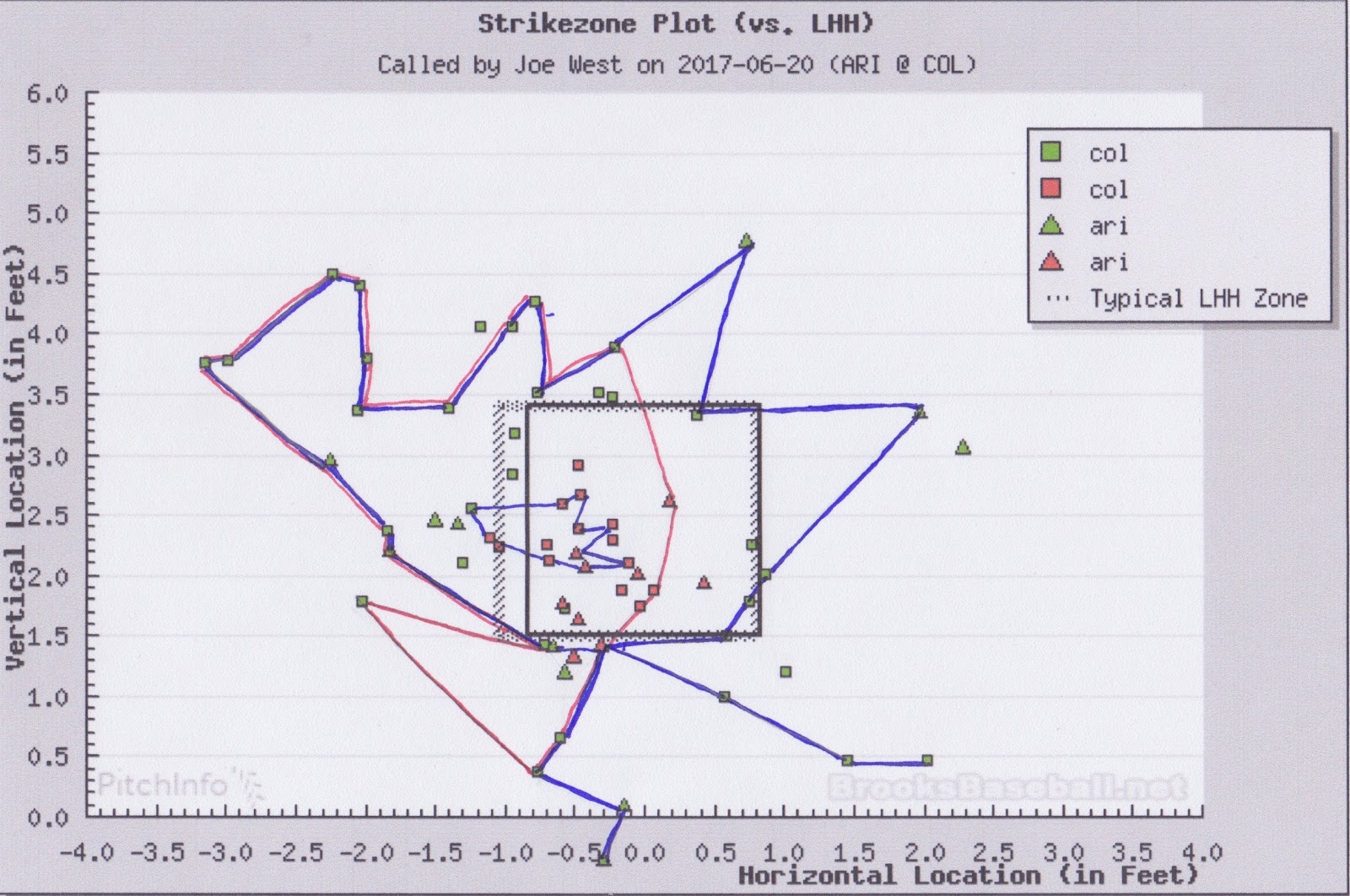 A bird taking flight, a squirrel, an unusable rocking chair. 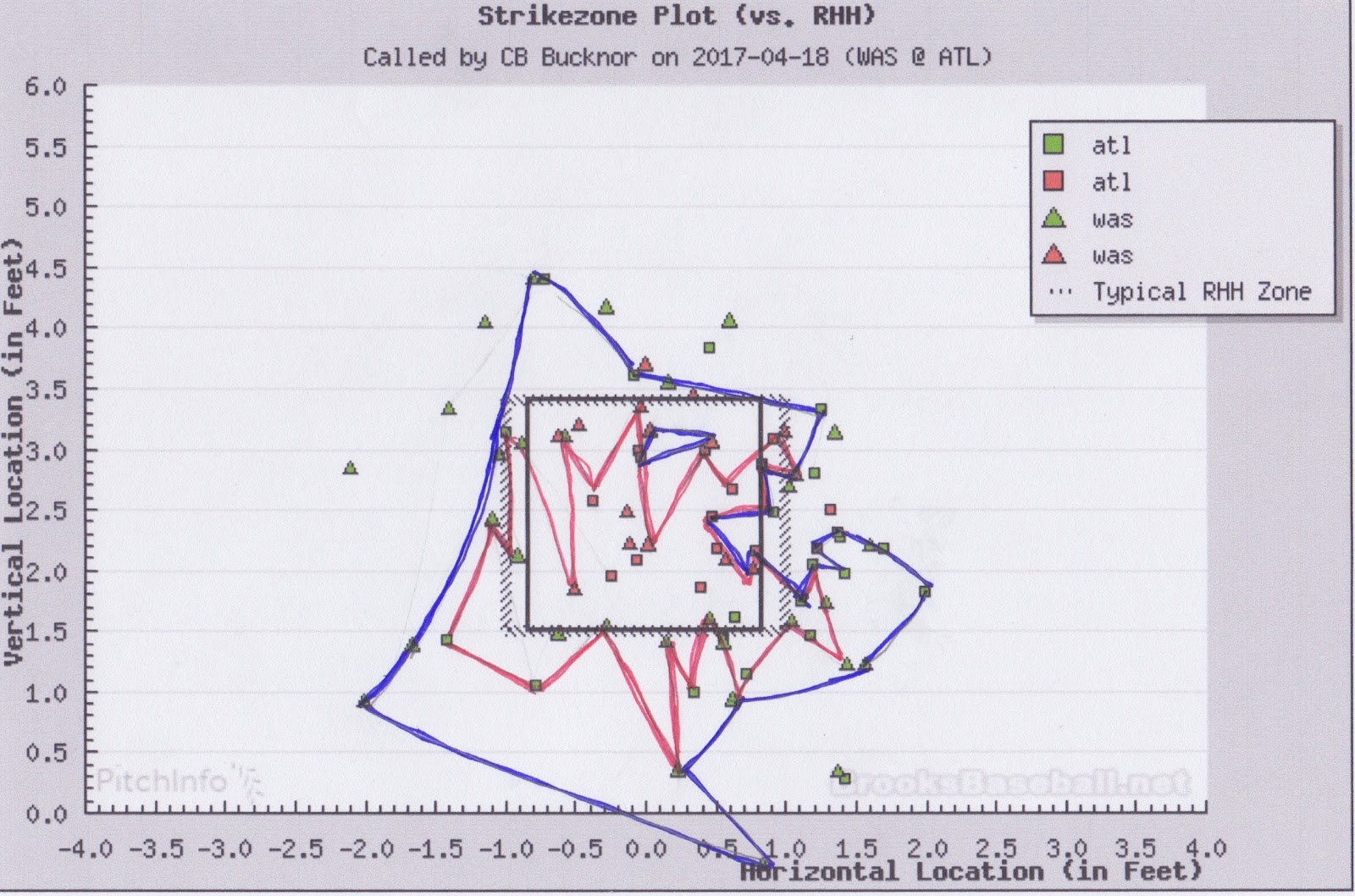 A kaiju, a firework, the slow erosion of two managers’ sanity.

We really shouldn’t be so hard on umpires. You could also see anything in there if you put your mind to it.

Like many, I was alarmed by some of the gaps in research of the New York Magazine piece about the miserable climate death all of our children will suffer; namely where the hell are the park factors? What good is a two celsius degree rise if you can’t predict its effect on DRA?

We can’t very well contemplate the transformation of New York to Bahrain, without a textured analysis of the hitting environment on the New York Bahrain-Penn League? Mason Williams’s lack of power production would have been a lot more forgivable when everyone is hitting into an extra layer of methane. A prospect 60 years before his time, it seems.

As a league scout was quick to point out to me, the obvious adjustment is entirely indoor stadiums, with seating composed of luxury suites for wealthy power brokers, as leisure activity will go entirely by the wayside for a massive underclass population living a nomadic, refugee-like existence: wandering the Earth in response to crop shortage and drought, battling kidney disease, and frequently changing the favorite team designated on the MLB At-Bat login shared by thousands at any given time.

The NYM piece also makes a nod to Mad Max: Fury Road as a representation of our culture’s slow acknowledgment of our arid, destitute future, and I too, could not help but wonder if Immortan Joe served as a preview of how frank future GMs will be about inevitability of prospect attrition. The War Boys really didn’t die off at a rate beyond your typical high school catching prospect, but freed of “can’t miss” expectations, sending a pitching prospect to the Arizona Fall League isn’t much removed from leading a high-speed chase from armed bandits through the bullet farm. But it’s the readiness to assume and cut losses that seems like the new trend. Mark Appel likely would not get three years in Triple-A in 2070.

Mostly, the future of the game will be determined by who in the league wields power when the only real currency is shelter, food and potable water, where players are stripped of their agency and bound to the owners that can ensure resources and survival for their family in a world that otherwise promises very little. Florida projects to be underwater within several decades, the dinger statue will be submerged in an acidic sea boiled out of all its life, the only among us currently prepared for this life are those who have already lived sealed off from the outside world in a desperate grasp for safety and starved of the necessary resources to thrive. Go Rays!

The San Francisco Museum of Modern Art will text you art on demand. It really is simple: send the phrase “Send me” plus a brief prompt—a color, a phrase, even an emoji—to 572-51, and generally, an image with title, creator, and year of creation arrives in your palm. The automated script that generates replies searches the collection for something tagged appropriately and sends it. When asked—repeatedly—for baseball and variations on the term, the SF MoMA bot obliged. 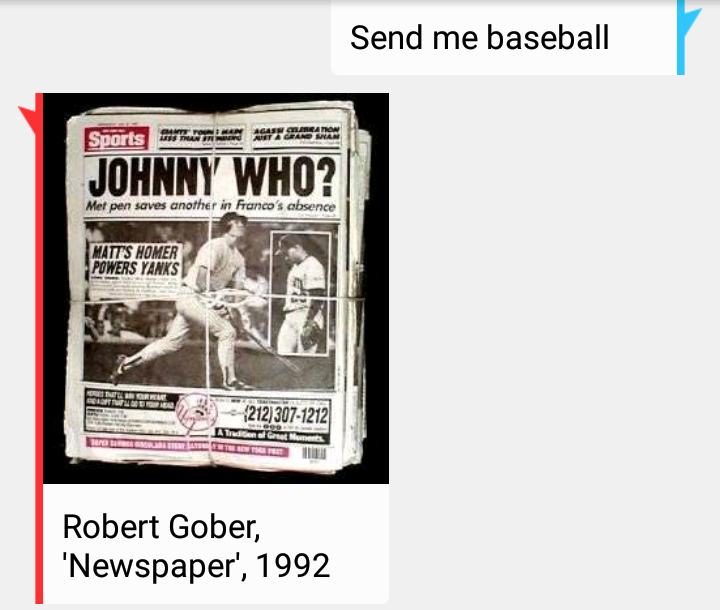 Sometimes, the connection between the prompt and result is quite evident—a portrait of a Real Live Baseball Player, like Graig Nettles. 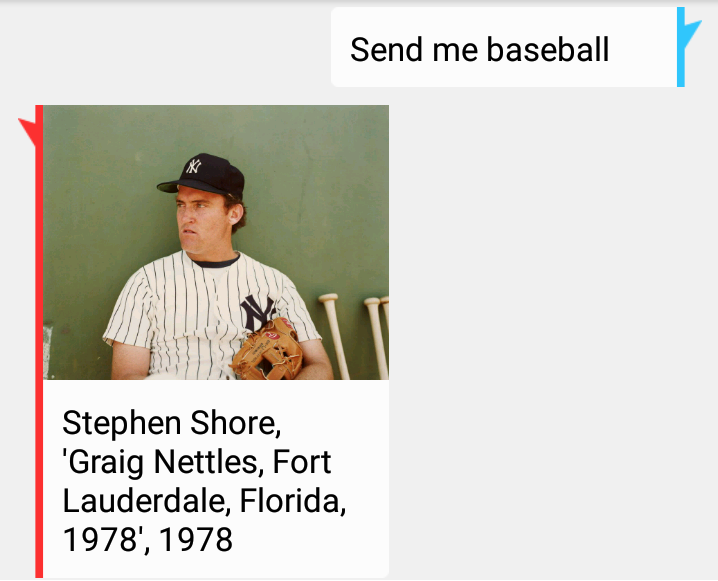 Shore’s work also includes this portrait of Nettles, as well: 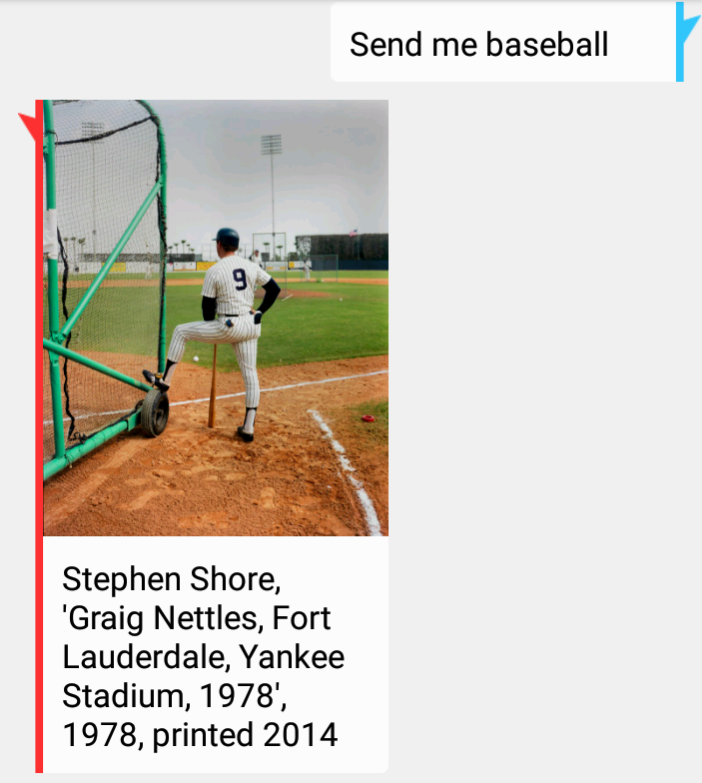 And this, from the now defunct Oneonta Yankees, the club’s Single A affiliate from 1967-1998: 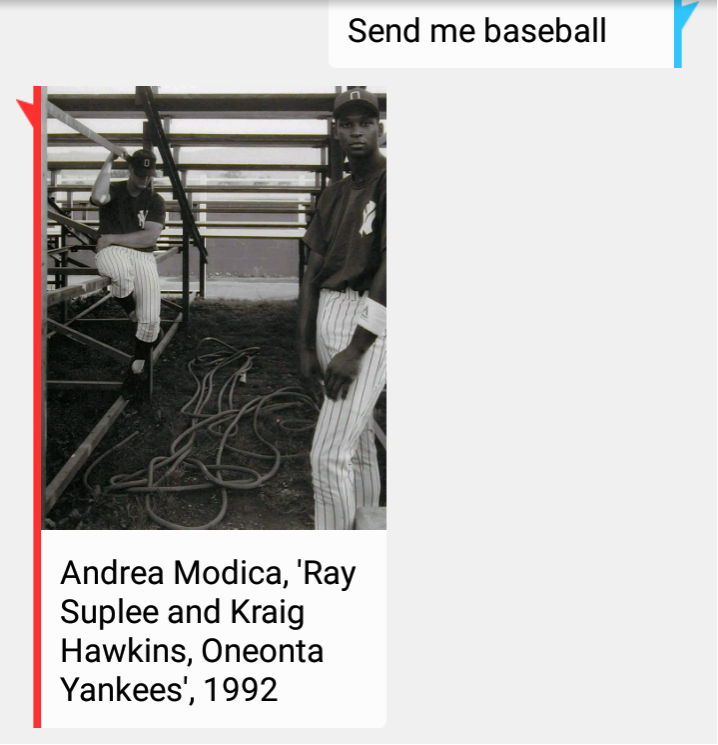 Sometimes it’s more tenuous: a blurred game on a screen in the background or the margins, as in this Larry Sultan piece—a short story waiting to be written—that Zack Moser received: 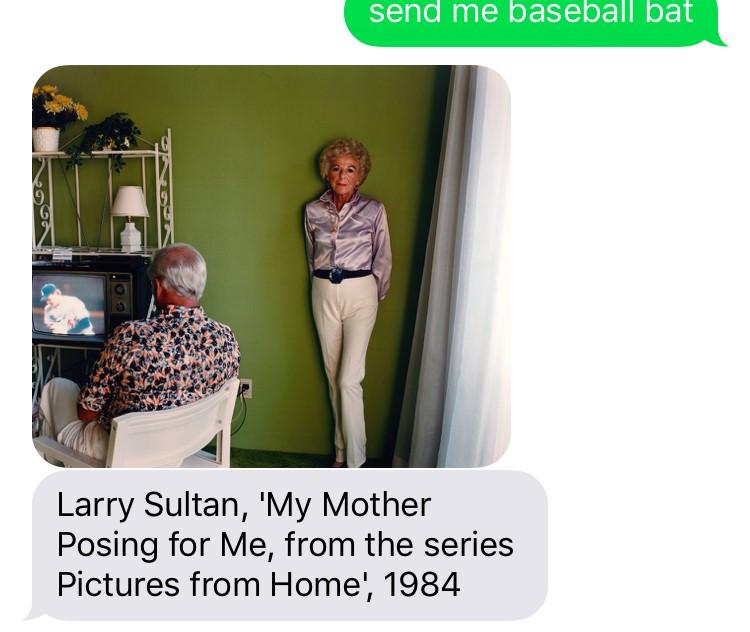 The exercise is a demonstration of the malleability of language; when I requested “pitcher,” I received a still life, white ceramic and a bowl of apples. Also, if the prompting phrase is more than one word, it seems to fixate on the first word, rather than the whole, at least as far as baseball riffs were concerned. But baseball appeared in surprising ways, such as this beautifully designed cover for Emigre 47: 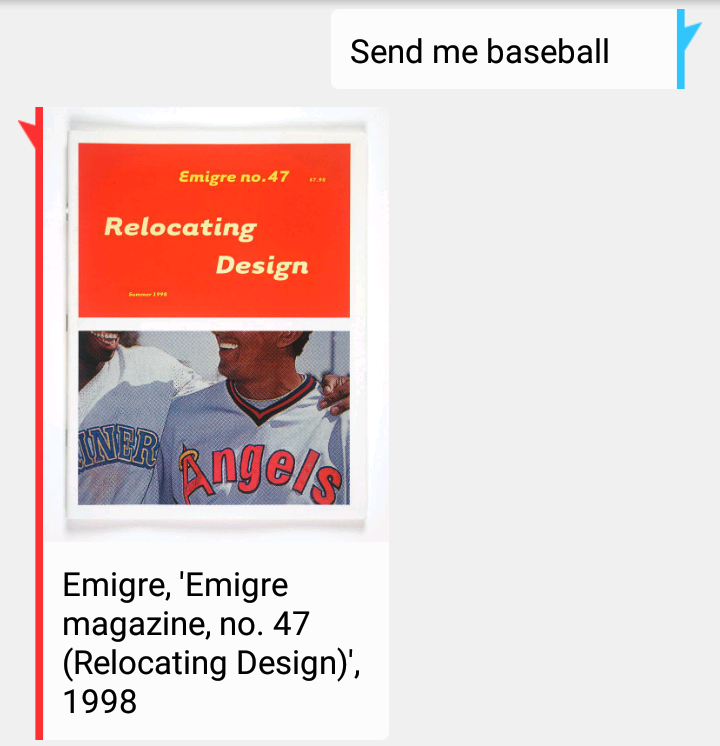 And this portrait by Kehinde Wiley: 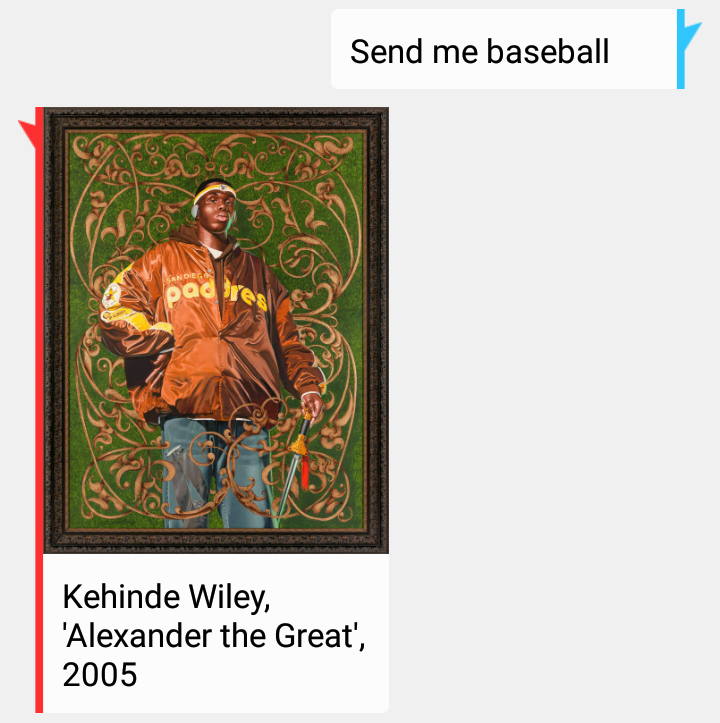 There are limitations, though; the bot doesn’t know it’s sent me that Emigre 47 cover six times already (or it knows and doesn’t care and that’s fine). After a dozen messages, I found myself getting the same images—including the same photo of Graig Nettles three times in a row. I never could get it to send me the Larry Sultan photo, but I suspect there aren’t that many baseball-associated images in the collection. More to the point, there’s no way to tell the algorithm, “I’ve already seen that. Give me new wonders.”

The moment I thought that, I felt horrifically ungrateful. I held in my hand a frankly modern marvel, and I wanted more. That, I suppose, is why I yoked visual art and baseball together in the first place. On a nightly basis, I see astonishments—athletes routinely hitting fastballs approaching triple digits and Freddy Galvis throwing out runners at first from a seated position in shallow left-center. Still, the fanatic brain has cravings: not just gargantuan hits, but Aaron Judge hitting the roof of Marlins Park; not just a tricky negotiation of foul territory, but Nolan Arenado flinging himself wholesale onto the tarp and coming up with it; not just a great leap at the wall, but Kevin Kiermaier turning Spiderman. But the fact that choosing only three examples to list here was a difficult choice—that so many plays feel like marvels still—is a good sign, I think. What I really need is more time in which to appreciate them and a way to tell the SF MoMA bot that’s not the kind of pitcher I meant and, of course, thank you.